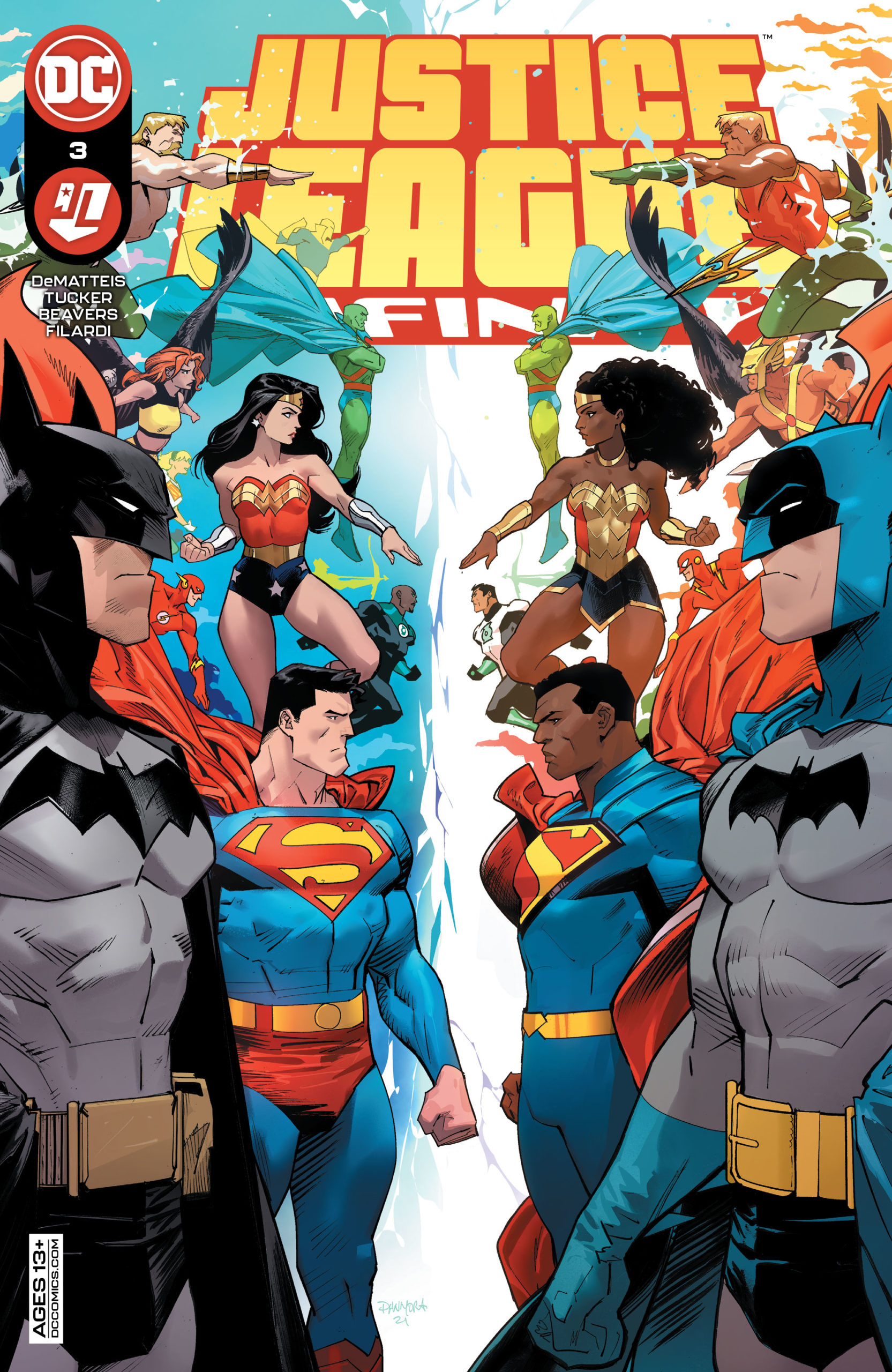 Chaos ensues as the League continues to deal with multiple Multiversal switcharoos in this week’s Justice League Infinity #3.

The Multiverse is in flux after Amazo ventures into “the cracked mirror”: a place that somehow impacts the fabric of the Multiverse (see Justice League Infinity #1). Amazo somehow managed to trigger a glitch (for lack of a better term) that has various heroes throughout the Multiverse switching places. The Superman of the DCAU has swapped places with Overman from Earth-X. While Overman started rampaging through Earth-DCAU (patent pending), Superman has joined the Freedom Fighters along with the Superman of Earth-D. Meanwhile, the Justice League from Earth-DCAU begins to investigate a portal that has opened up in space in hopes to learn more about the unfolding crisis.

I spent much of last month’s review speculating about the nature of this particular incarnation of the Multiverse. Well – it seems that DeMatteis and Tucker are using Earth’s designations based on the Pre-Crisis on Infinite Earths (COIE) multiverse, and they seem to be preoccupied with the Earths with letter designations. Justice League Infinity #3 specifically designates Overman’s Earth as Earth-X (which is actually “Earth-X (Two)” in the original Pre-COIE Multiverse… don’t ask unless you want to spend an hour falling down the digital bottomless rabbit hole known as Wikipedia). Likewise, they introduce Earth-D (which first appeared in the Legends of the DC Universe: Crisis on Infinite Earths One-Shot from 1999) as the home of the Justice Alliance. The Justice Alliance of Earth-D is home to a more racially diverse version of the Justice League from Pre-COIE Earth-One, including black versions of Superman and Wonder Woman, an Asian Green Lantern, and a Native American Green Arrow. Unsurprisingly though, Earth-D’s Superman looks a lot like President Superman of Earth-23.

Now that DeMatteis and Tucker have established that they aren’t dealing with characters from Multiverse-1 (the Multiverse established in The Multiversity), it’s still unclear if this is supposed to be the Pre-COIE Multiverse or a variation of it. This might seem like a painfully nuanced detail; however, in light of this week’s Infinite Frontier #6, Justice League Infinity could actually have major ramifications for DC’s metanarrative going forward. Conversely, this could be a completely separate story, totally unrelated to Joshua Williamson’s plan. At this point, it’s a coin toss.

Ethan Beavers probably has one of the best gigs at DC right now. He must be having an absolute field day drawing this title. For starters – his work is absolutely gorgeous. He has such a great grasp of the DCAU visual style. It’s obviously a passion project for him. Second, his designs are incredible. He has so much history to pull on when drawing these characters. From Bruce Timm’s original art-deco aesthetic, George Perez and Paul Ryan’s COIE-related work, and Rags Morales’s design for President Superman. Beavers manages to create a hybrid of all of these sources while also putting his own spin on his art. DC really did tap the right guy for the job.

Justice League Infinity #3 is another fantastic issue in a series that has surpassed all of my expectations. DeMatteis and Tucker continue to unpack this Multiversal epic with engaging storytelling of the highest quality. Ethan Beaver’s work on this book is an artistic tour de force.

Final Verdict: This book is for long-time DC fans. Veterans will likely love it.