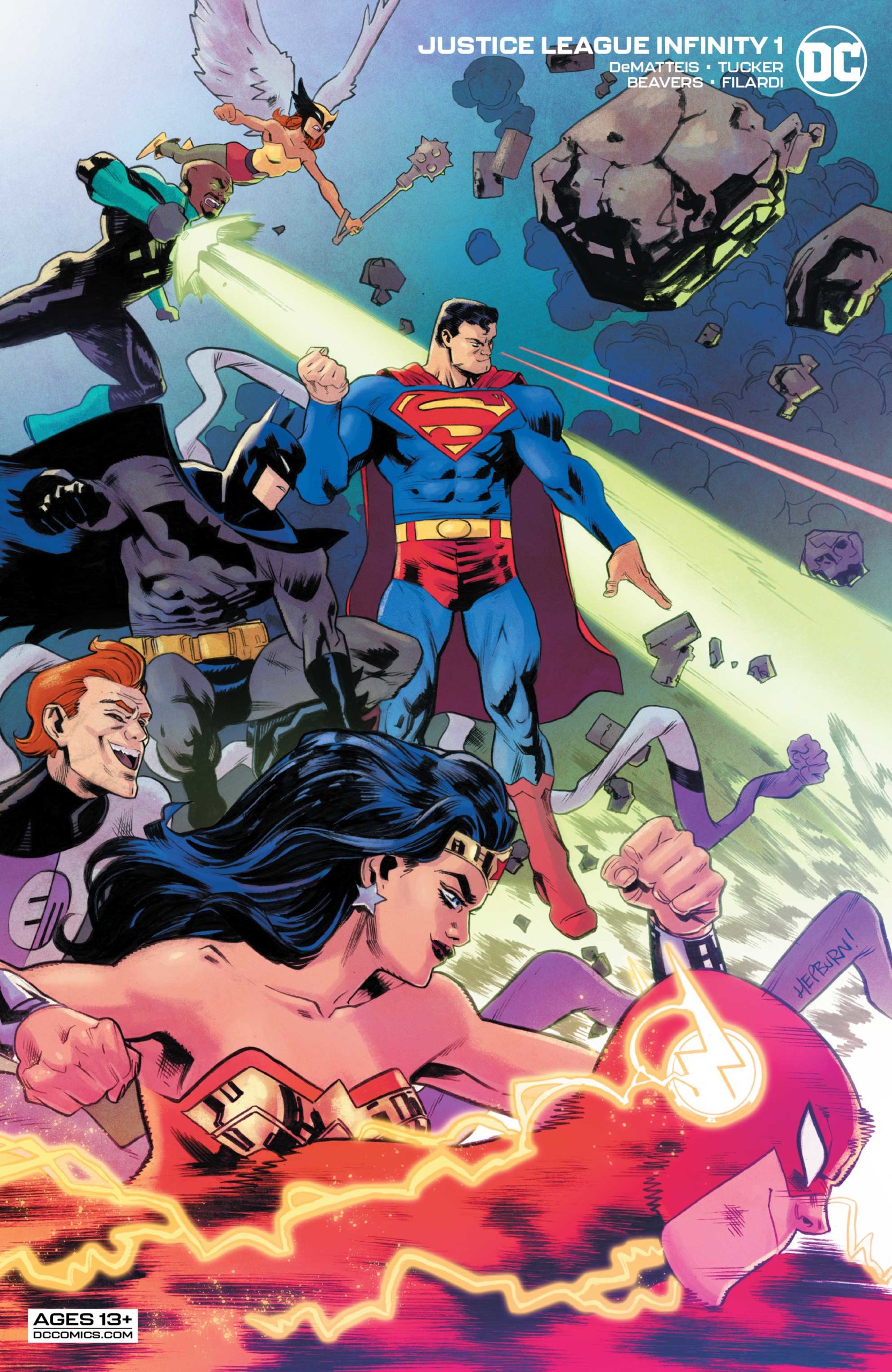 The cosmos cracks open and worlds collide, as DC revisits the DCAU in this week’s show-stopping Justice League Infinity #1. This new series picks up where Justice League Unlimited left off, continuing the adventures of the Justice League from the DC Animated Universe (A.K.A. the “Timmverse”).

The issue opens with Amazo flying through space, searching for meaning. For those of you who don’t know or may have forgotten, this version of the super-powered android was created by Lex Luthor. After absorbing each Justice League member’s power set, Amazo became aware of his own existence, which triggered an existential crisis for the android, who left earth in search of meaning within the universe.

After the huge success of Batman: The Adventures Continue, this is the perfect time to bring back a comic based on, and continuing, the Justice League’s animated adventuress.

Nostalgia is One Hell Of A Drug

Reading this title feels like visiting an old friend you haven’t seen in far too long. While you might have expected things to have changed drastically, it turns out the two of you pick up right where you left off. This franchise has aged well.

In all fairness, it’s not purely just the Justice League Unlimited roster that makes this title work, it’s JM DeMatteis’ script. The opening sequence of Justice League Infinity feels iconically DeMatteis, as he often explores cosmic psychedelic themes. Also – it’s noticeable that he’s utilizing some of his signature characters; specifically, this issue features the JL team from the writer’s tenure on Justice League International. Therefore, Justice League Infinity #1 in many ways is a hybrid of the DCAU and JLI – that’s a lot of nostalgia to pack into one issue.

That being said, there are some things about this issue that are a bit clunky. At one point, Granny Goodness refers to the League as “nincompoops”, seriously, who uses the word “nincompoop” anymore? The last time I used that word, I was ten. DeMatteis and his team are clearly leaning into an “all ages” vibe despite the fact that the issue is rated 13+. In short, the issue reads a bit childish at times… but that may help bring in a younger audience.

Ethan Beavers is a brave man taking on this title. Seriously, there’s only one Bruce Timm. Beavers does do a fairly good job channeling Timm’s aesthetic, as he’s got a great grasp of the character designs and he understands the art-deco aesthetic that is quintessentially Timm. Also, Beavers not only embraces the DCAU style, but he also brings a certain psychedelic sensibility, which feels 50% DeMatteis and 50% Jack Kirby. Beavers leans into both and it works well.

Now with regards to colors, Nick Filardi also leans into the Timm style. His color choices are bright and vibrant, kinda like a Saturday morning cartoon… go Figure. Seriously, though, Filardi’s colors really add to the overall feel of the comic.

Justice League Infinity #1 is a fun and fantastic first issue. DeMatteis and Tucker reinvigorate a franchise that many considered dead. Filardi is faithful to the Timm style while adding the appropriate flair that makes the title feel new and unique.

I’m very excited to see where things go next.

Final Verdict: Justice League Infinity #1 is a strong start for a promising title.