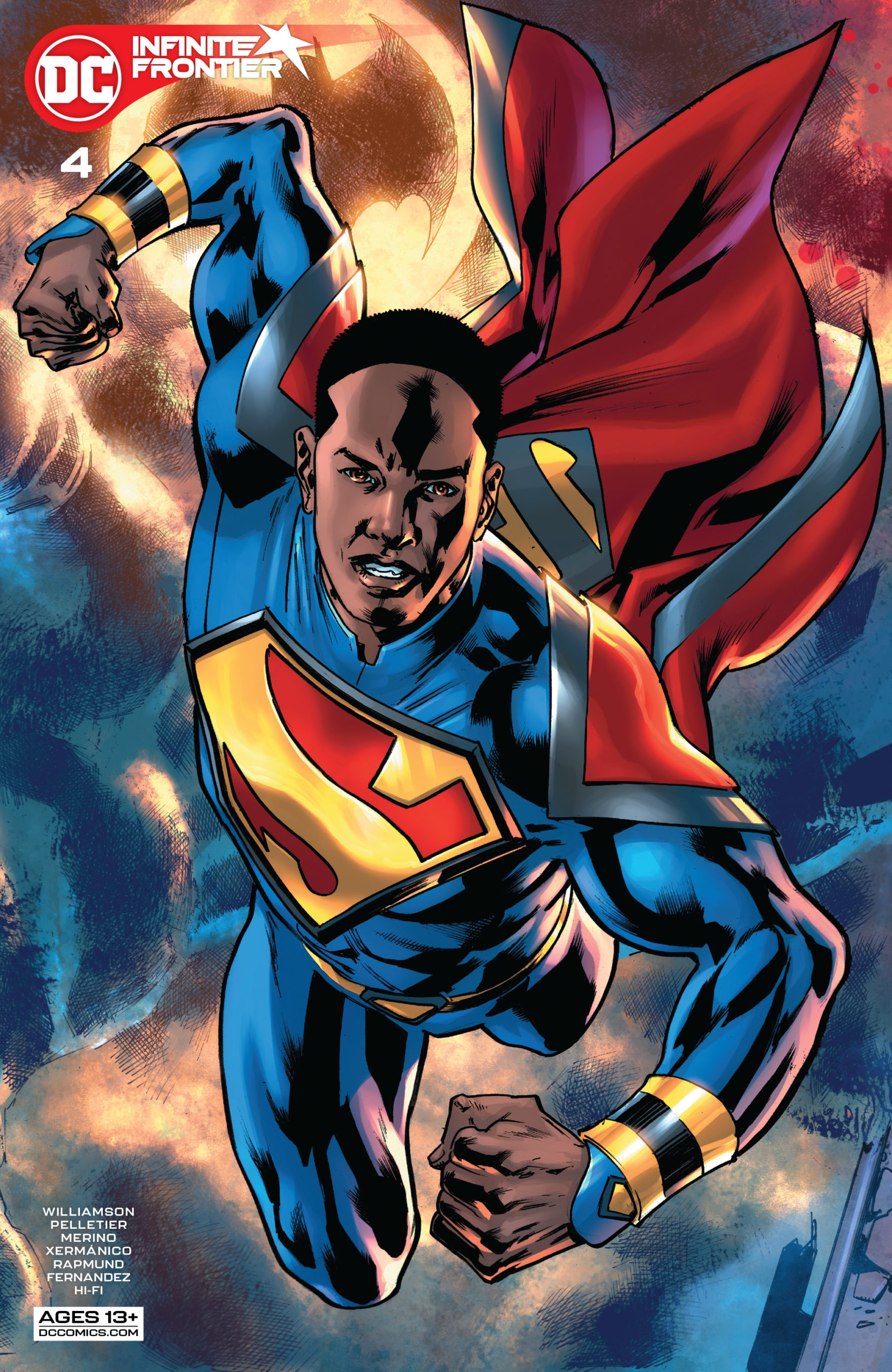 Upon his arrival on Earth-23 in Infinite Frontier #1, Flashpoint Batman has been trying to figure out how he ended up in a  rocket ship that crash-landed on President Superman’s family farm. In this week’s issue, the Multiverse’s Finest (copyright pending) returns to Eath-23 in search of Lex Luthor, as Earth-23’s Luthor is known for having tried to traverse the Multiverse (see Action Comics #9 vol.2).

Meanwhile, the new Black Lantern, Roy Harper, encounters the missing members of Earth-0’s JSA while in the bleed. After briefly scuffling due to a miscommunication, Roy and the JSA are whisked away to a mysterious corner of the Multiverse.

One of the more impressive elements of Infinite Frontier is how Joshua Williamson has managed to weave various long-running threads into a single  story. For example, in Infinite Frontier #4, Williamson includes characters from Forever Evil, The Multiversity, Kingdom Come, Flashpoint, Blackest Night, Crisis on Infinite Earths, and more. What’s even more impressive is that he does it effortlessly. Due to the nature of this story, Williamson’s able to incorporate all of these different characters from across the Multiverse into a cohesive story that works. Nothing feels forced, no one feels shoehorned… oh, and the best part is that the last page is a mic drop moment that showcases a lot of these characters. It’s absolutely brilliant.

The artwork for Infinite Frontier has been incredibly consistent, despite having multiple individuals working on pencils, inks, and colors. While Xermanico seems to have set the tone and tenor for the series’ aesthetic, the rest of the team’s also done a great job maintaining Xermanico’s style.

The big difference for Infinite Frontier #4 is that Hi-Fi was credited for coloring the issue, and frankly it shows. While previous issues of Infinite Frontier have had perfectly fine coloring, Hi-Fi – in my humble opinion – really brings a different level of quality to the book. For those of you who don’t know, Hi-Fi is not a single individual. Rather, it is a studio that DC frequently hires to color its books. Frankly, they do a great job. The coloring for this issue is rich and lush. Hi-Fi’s strength is in its tendency to use color as a signal for the reader. Flashbacks and unique settings are given distinct color pallets that help establish the mood and atmosphere of the story. I’m hoping to see more from Hi-Fi in coming issues.

Infinite Frontier #4 maintains the quality attained in the previous issue, and Joshua Williamson continues to remix previous Crisis events into what seems like a unique story. Xermanico and his team once again do a great job creating vivid and detailed art.

As this title progresses, the more I wish it was longer. We’re now only two issues away from the end, and Williamson has a lot to unpack. Luckily, the writer seems to have plans to continue his story in the recently announced Justice Incarnate title. So get ready for more Captain Carrot!

Final Verdict: This one is for long-time fans who love DC’s rich Multiverse.