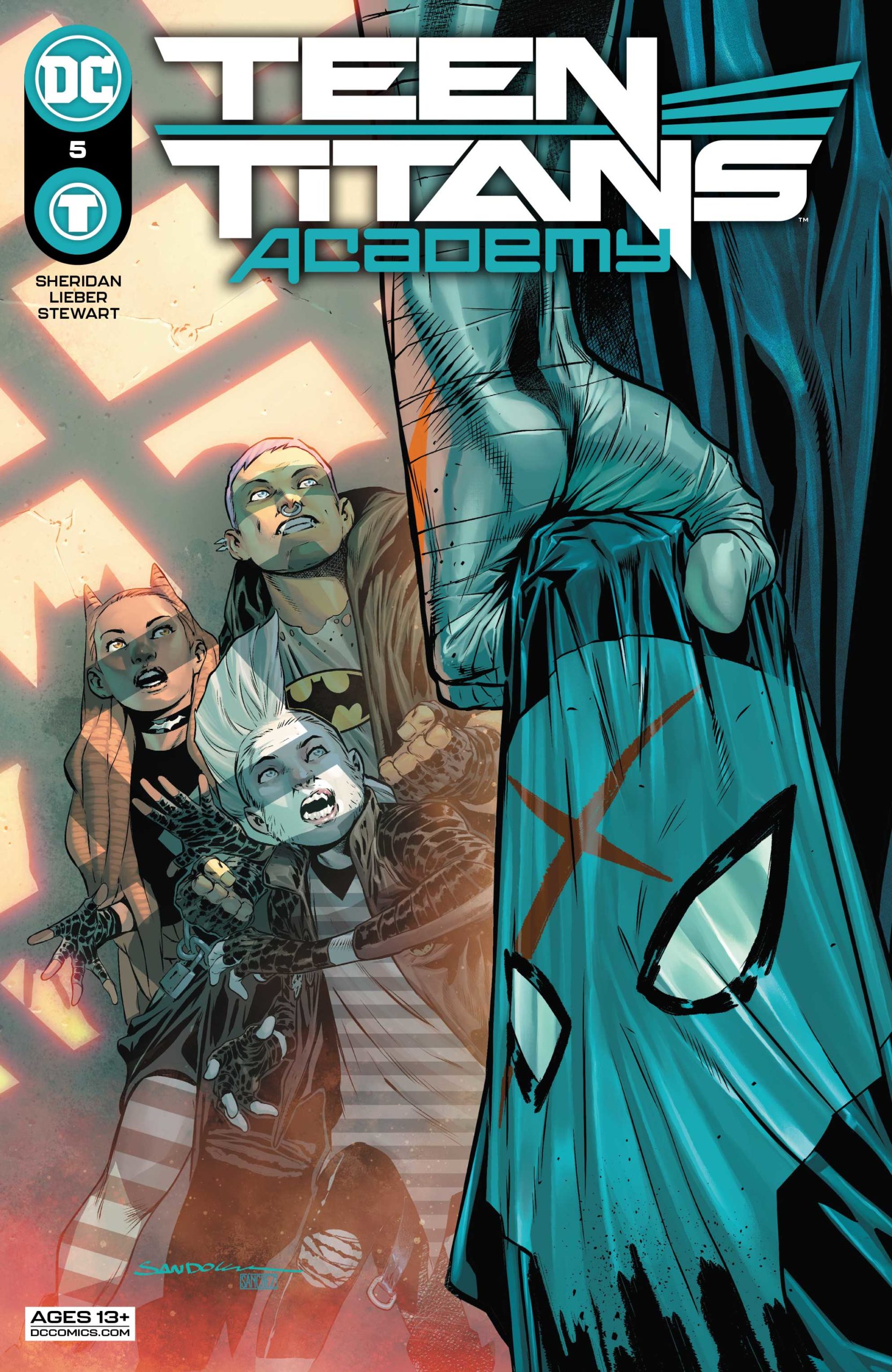 I jumped into reviewing this series from its cute annual a few weeks ago, but I did give the entire series a read before doing so. I have to say, I’m loving it. A team of superheroes, actually in TTA’s case – several teams, teen drama, and just overall fun? All this sounds like a show for The CW in the making! That said, Teen Titans Academy #5 takes a step back from everything the series has done so far, to focus on one particular set of students.

This issue focuses on the origins of the Bat Pack, and even though I miss what the first four issues brought to the table, this is somehow an even meatier meal. We get a deep dive into Bratgirl, Chupacabra, and Megabat, all of which was a wonderful surprise. I’ve been interested in this group of kids from the start – super fans of Batman sound familiar, huh? For their origin story to be told in the classic “Scooby-Doo” style is picture-perfect. I don’t want to say that Tim Sheridan’s a genius, but…

The story mainly takes place in a group home for foster kids and a… wait for it… spooky hospital. Throw in a talking dog and I’m in the ‘70s. The Bat Pack is trying to figure out what’s happening to kids from the home who’ve gone missing. Diego sneaks out to enlist Batman’s help, only to run into Nightwing (who he refers to as a “cheap copy” – I love Dick Grayson, but I can’t get enough of Diego).

The meddling kids decide to take things into their own hands, which of course leads to the aforementioned Scooby-Doo shenanigans. It’s your standard Mystery Inc. fare from there, save for the actual unmasking (because monsters are real in the DC Universe). We also get to see how Diego turns into Chupacabra and, flashing back to the present, the team solving the mystery of exactly who Red-X is.

If it wasn’t clear above, I’m a fan of Tim Sheridan’s writing. He’s been doing all the right things with this series (and, as it turns out, wasn’t even part of the one thing I didn’t really like about the annual). With Sheridan already having his foot in other media (Masters of the Universe: Revelation, Batman: The Long Halloween Parts One and Two), I’d love to see him involved in one of the CW-DC shows. Until then, I’ll take more of what he showed us in Teen Titans Academy #5. Imagine a Bat Pack mini-series that leans into the Scooby-Doo of it all? ::chef’s kiss:: (if you know, you know). 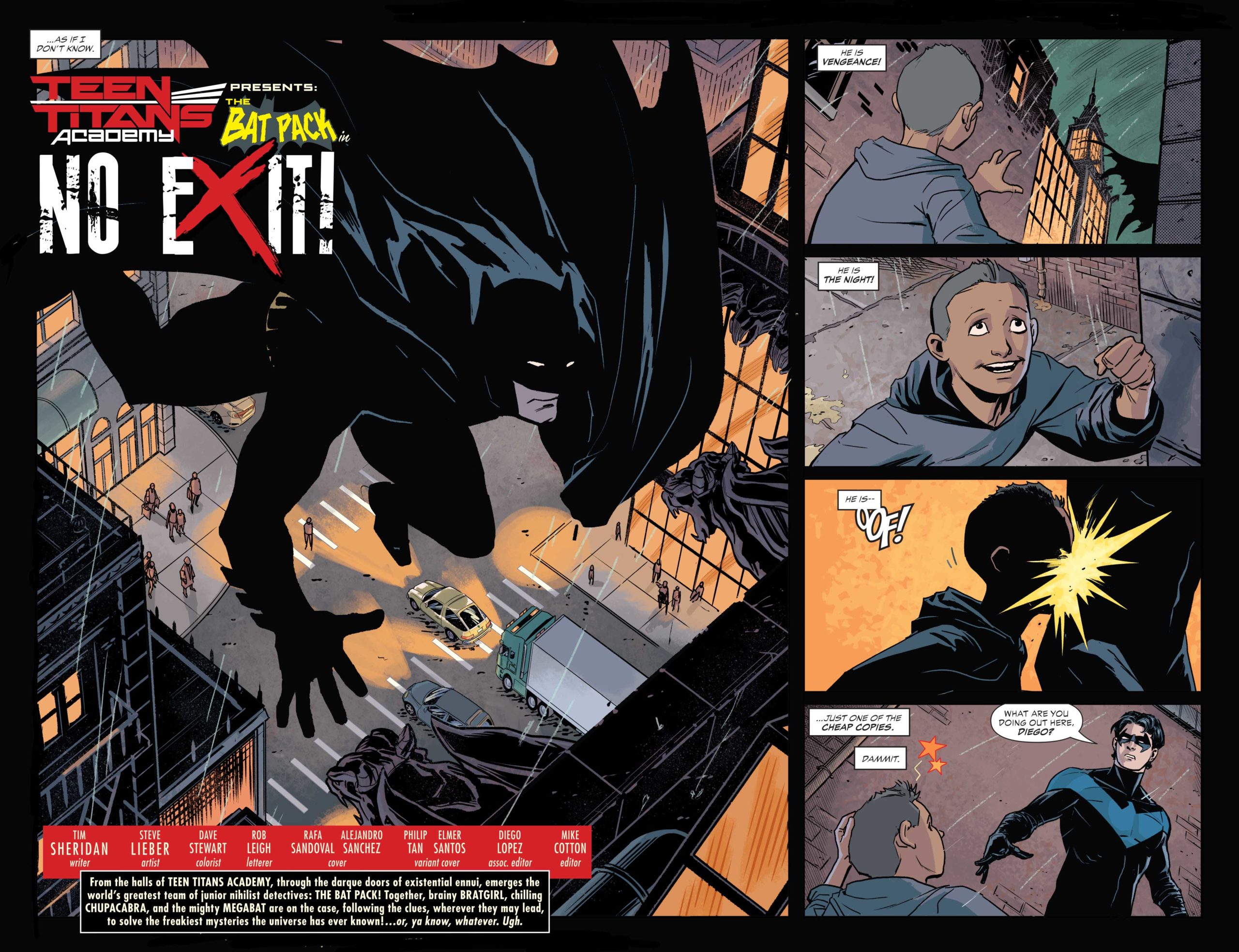 Steve Lieber brought an excellent style to this issue with his art. It’s more modern, but there’s an indie feel to it that just fits. What made me swoon in this issue? His work with Dr. Grusel. There were definite Dr. Jekyll and Mr. Hyde vibes with this character and I loved it. Dave Stewart’s colors brought the whole thing to life, as his range is great… there are panels where I can see a great spy-thriller style, and then his more vibrant comic book variation. None of it ever feels out of place either, as Stewart is very deliberate in how he colors each panel.

Teen Titans Academy #5 takes a step out of the series’ normal storytelling to focus on the Bat Pack, and it works beyond words. This origin story not only took its time to flesh out some of the most interesting characters, but it also pushes the story forward in big strides.

Ben Affleck to Film ‘The Flash’ Scenes This Fall