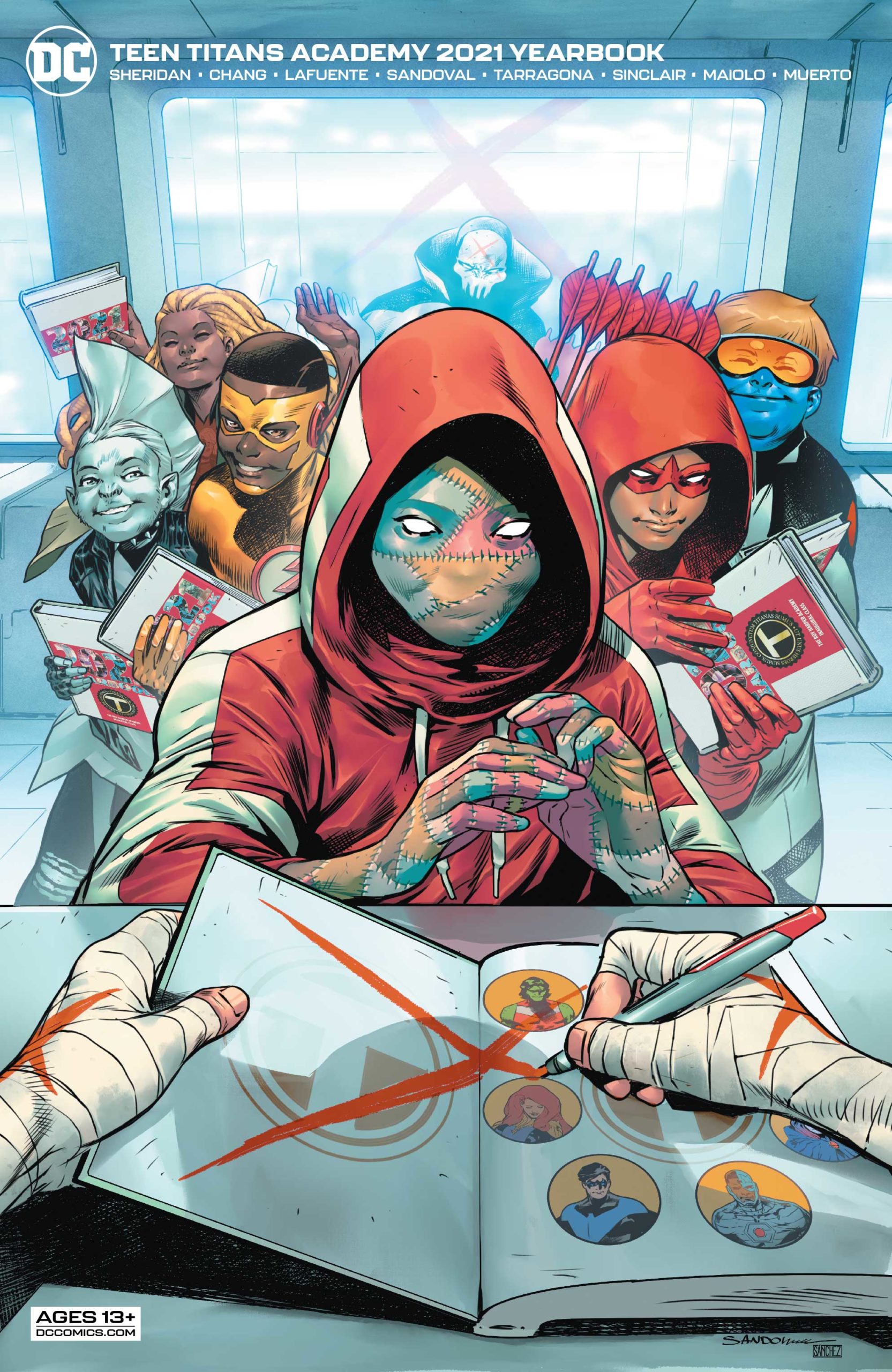 Jumping into Teen Titans Academy, I had no idea how much I was going to love this story and the genre it falls into. It feels like it could’ve been written by John Hughes. I love that this isn’t just a story about the new crop of kids; it’s generational. We’re getting the story of the original team (the Titans), the senior class (Teen Titans), and the youngest soon-to-be heroes (the students of the Roy Harper Titans Academy). While I did read the previous four issues to prepare for this review, the Teen Titans Academy 2021 Yearbook #1 was such a fun issue to jump into for reviewing this line. 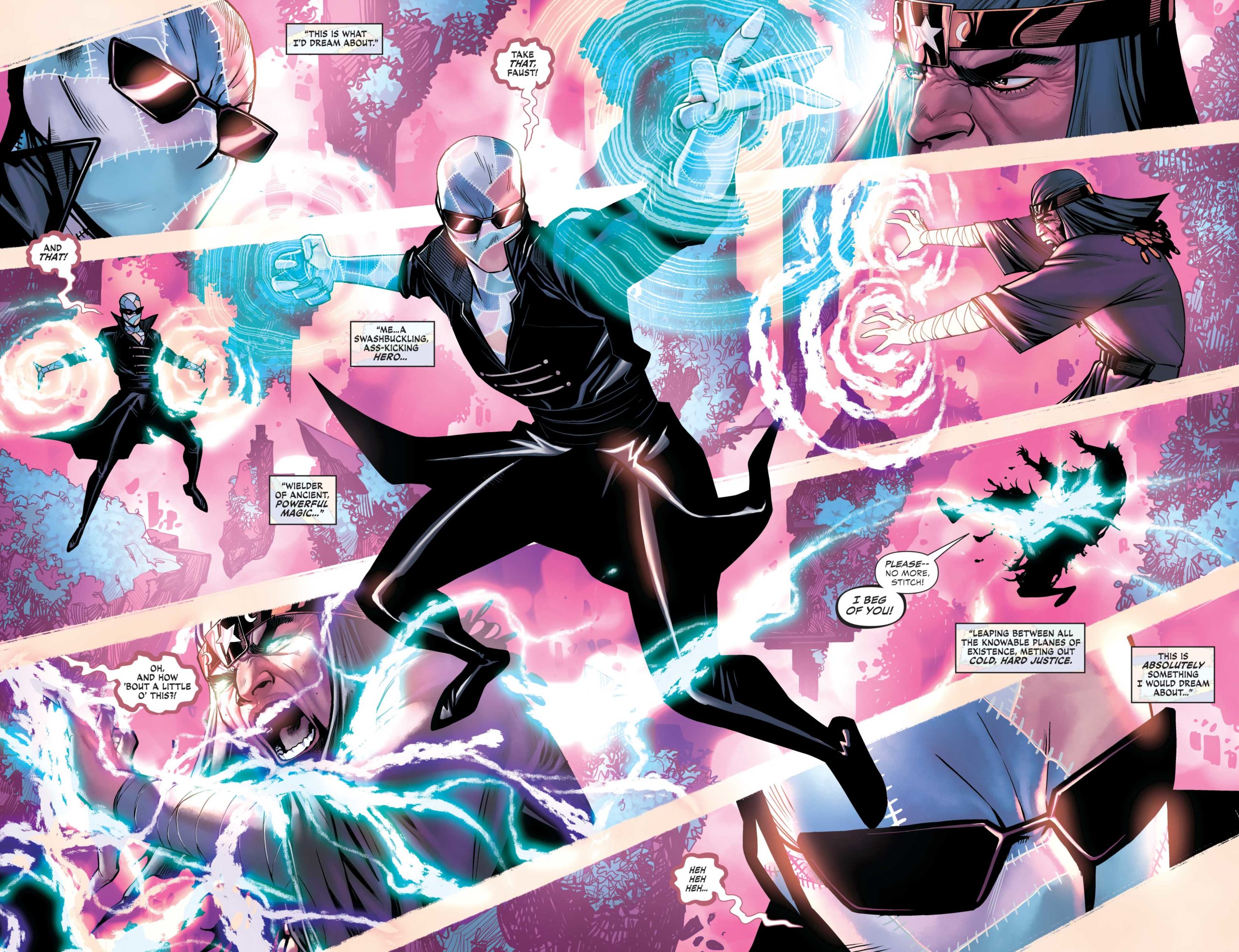 Before diving into each of the individual stories, I want to talk about the concept of this Annual. If I’m being honest, it’s probably a bit of a trope to present the Annual for a book about a superhero school as a yearbook, but I love it. When I turned to the first page of Stich, In Time, I was a bit disappointed that the entire book wasn’t going to be in yearbook form (though, it’s for the best that it wasn’t). I loved that classic yearbook features were woven in between the pages of the actual stories in the book.

The only thing that hit me the wrong way was the “The Judas Contract On Ice” joke. While the events of that story may not have affected the students of Teen Titans Academy, it did affect the Titans themselves. It feels a bit insensitive to the faculty of the academy who lived through what was a traumatizing event. Outside of that, the yearbook concept was cute and I hope to see it return next year.

The first story in Teen Titans Academy 2021 Yearbook #1 is slightly spoiled by the opening page of the book. Regardless of already knowing who is going to win the class president race, Stitch, In Time has a lot of heart. Stitch’s story is one that we all can relate to, at least a little bit. They may not be human, but they have the same human desires we all have (especially as teenagers): friendship and to be noticed for instance. Even as an adult, you can relate to feeling alone when you may not really be alone.

Tim Sheridan seems to follow what the folks over on The CW’s The Flash follow; the three H’s: heart, humor, and heroics. Those three elements, I think, are what make the best superhero stories. Stitch, In Time, employs all three throughout the story and kicks off Teen Titans Academy 2021 Yearbook #1 off the right way. Having read this series back to back to prepare for taking over reviewing this title, I’ve quickly grown to appreciate Sheridan’s writing. While his dialogue did miss with me at times, he’s able to craft a story worth telling.

Stitch, In Time is drawn by Bernard Chang, with colors by Marcelo Maiolo and letters by Rob Leigh (who joins Sheridan as a constant throughout the issue). Chang’s work is nothing short of classic. When I think of comic books, this is the style my mind defaults to. Maiolo’s colors are also wonderful, hitting some classic notes that I love. This art team is by far one of my favorites that I’ve seen in recent months.

I do like that the Teen Titans Academy 2021 Yearbook #1 touches on characters outside of the students, though I’m not sure if Five More Minutes really does anything for me. It’s certainly the weakest story from the issue, as it doesn’t really seem to say anything. It could be that Sheridan is setting things up for the future with Raven’s visions; I’m just not sure if an Annual was the place to plant those seeds. The story is trying very hard to hit some emotional beats that rarely connect.

Marco Santucci’s art has a nice realistic look to it that’s enhanced by Michael Atiyeh’s colors. Between the shading and lighting, the overall art of Five More Minutes is the least “comic-booky”, and I mean that in all the good ways. While I’m having a hard time feeling the emotions I’m meant to while reading this, the art elevates those emotions.

The third story focuses on Matt Price and Tooby and hits on one of the biggest superhero tropes of all time – saving a cat. That’s OK though, tropes exist for a reason; sometimes as a joke and sometimes to tug at your heartstrings. I’m pleased to report that this story used it for the latter. Family stories, especially those about found family, can have a huge emotional weight to them. These final pages are the heaviest.

Darko Lafuente’s art is quite unique. It’s heavily inspired by Manga and overall gives off a very “cute” vibe. I’m very into it, though I can’t decide if it’s “too” cute for the story being told. That said, Miquel Muerto’s colors are the perfect match for Lafuente’s style here. It’s bright, it’s vibrant, and the pink/purple hue that stays with the story just feels right.

Very important content warning: This story very lightly deals with child abuse. If you’re uncomfortable with these themes, I recommend sticking to this review and skipping the story.

The final story focuses on the big bad of Teen Titans Academy’s first arc, Red X. Mainly set 9 years before the current events in the series, Red X acts mainly as an antihero, as he saves foster kids who are being raised to be Black Mask’s soldiers. While the story focuses on this Red X of the past, its ultimate goal is to tease the Red X of the present; the one that has been infiltrating the school.

Rafa Sandoval, Jordi Tarragona, and Alex Sinclair bring this final story back to a traditional modern art style. It falls right in line with the mainline series and is gorgeous to look at. The details are extraordinary and Sinclair’s colors bring the whole thing home.

Despite what feels like an incentive joke on the opening pages and a mediocre story with “Five More Minutes”, Teen Titans Academy 2021 Yearbook #1 is a huge win. I love the format and the strength in the other three stories make this issue a must-read. Having Sheridan and Leigh as constants throughout helped unify the overall issue, while having different artists helped to make the stories their own.