A brand new King Shark figure from Hot Toys has been revealed, thanks to The Suicide Squad director James Gunn.  Gunn recently took to his official Twitter page to post some pictures of the new figure, with a caption that read:

Yes, I know he looks like he’s smiling, but don’t get too close

The figure was also revealed during Hot Toys Summer Showcase in Hong Kong. From what I can see, it doesn’t appear to have many joints, so I cant imagine it will be fully pose-able… but I may be wrong. He has interchangeable hands and a pair of extra pants, which look like lycra swimming shorts to me.

The figure appears to be highly detailed, featuring King Shark’s scarred skin, beady eyes, webbed hands and feet, checked denim shorts, and it does kind of look like he’s smiling. I also think that his flesh looks as though it has a very realistic shark skin texture to it.

I love this figure, and even though I’ve only seen trailers for the movie, King Shark is definitely my favourite. 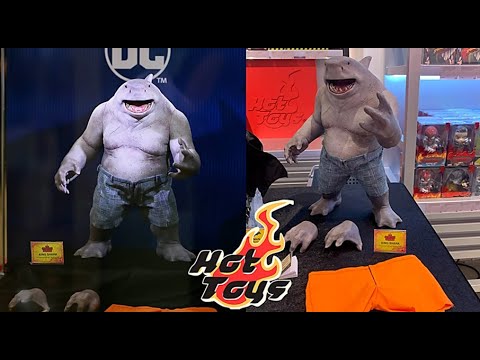 King Shark is voiced in the upcoming The Suicide Squad movie by the iconic action star Sylvester Stallone, and another actor Steve Agee was the on-set reference for the character.

The Suicide Squad is scheduled to be theatrically released in the United Kingdom on July 30, 2021, and in the United States on August 5th , before streaming on HBO Max the following day. Even though the movie is being released next Friday, Hot Toys have yet to announce a release date for their King Shark but I have a feeling it will sell out very quickly when it is eventually released because judging by social media there are already a lot of King Shark fans out there .