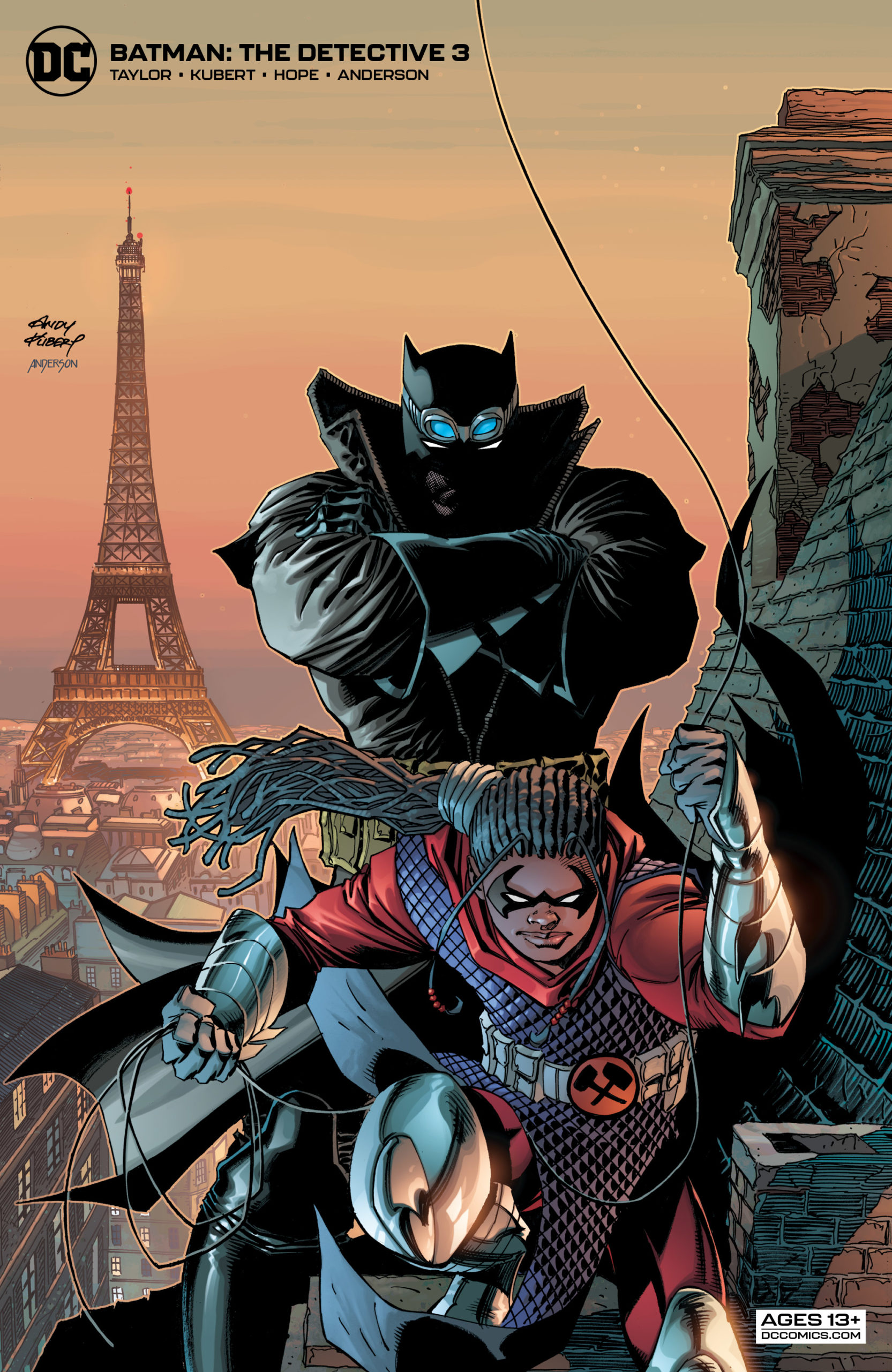 Just when I thought this series couldn’t get any better Tom Taylor, Andy Kubert, Sandra Hope, Brad Anderson and Clem Robins dropped bombs in Batman: The Detective #3 that just blew me away. These guys really know how to tell a story.

This issue walks between the present (well… the future) and the past beautifully. From the opening page with Batman kicking down a hospital door, the near lifeless form of Henri Ducard in arms, a reader’s attention is fully grabbed. From there we get a look into Bruce’s past, and his training with the greatest manhunter of the past, from whom he learned some of the skills that make him the greatest crime fighter of all-time.

There are so many beautiful moments; from prototype utility belts, Batman in sidekick mode, and the psychology of the gun, that left me grinning from ear to ear, cover to cover. Sometimes stories that drop major flashbacks mid-flow take you out of the moment, but Tom Taylor’s pacing and narrative drags us screaming back into the present (well… the future) in no uncertain terms by the issue’s end.

Kubert, Hope, Anderson and Robins. I love these guys. The way we see a teenage Bruce Wayne, and we know it’s the same guy from the intensity in his eyes alone, is masterfully handled. Better men than I have far more eloquently expressed the clarity, flow and beauty of Andy Kubert’s pencils, and what a consummate storyteller he is… it’s common knowledge anyway. All I’ll say is that his work, impeccably inked by Sandra hope, is cool as all get out. The art in this book is gorgeous.

Then we get Brad Anderson’s drool-inducing colors. The rich warm glow of the flashback scenes, with a ton more oranges, and browns, transport you and you know that this is a different time you’re looking at, when compared to the opening and closing pages of the story. I frequently rave about Brad’s work, but I mean… look at it!

Once again Clayton Cowles is on overtime, as there’s a ton of (excellent) Tom Taylor Dialogue in this book. The great thing is that Clayton (may I call you Clayton?) is clearly having fun reading them, and laying them on the page, as much as readers are enjoying devouring them.

Batman: The Detective #3 only furthers the plot of the story at the beginning and the end of the issue, but it adds to Batman’s legend in a massive way throughout the rest of the book. The level of character building that’s happening in these pages elevates the whole narrative, making it feel like this is a truly important part of the Dark Knight’s history. I loved this issue, will revisit it again, and remember it fondly.

As present day stories go (well… future) this is one of the best Batman books out there, and I’m loving it. Highly recommended.