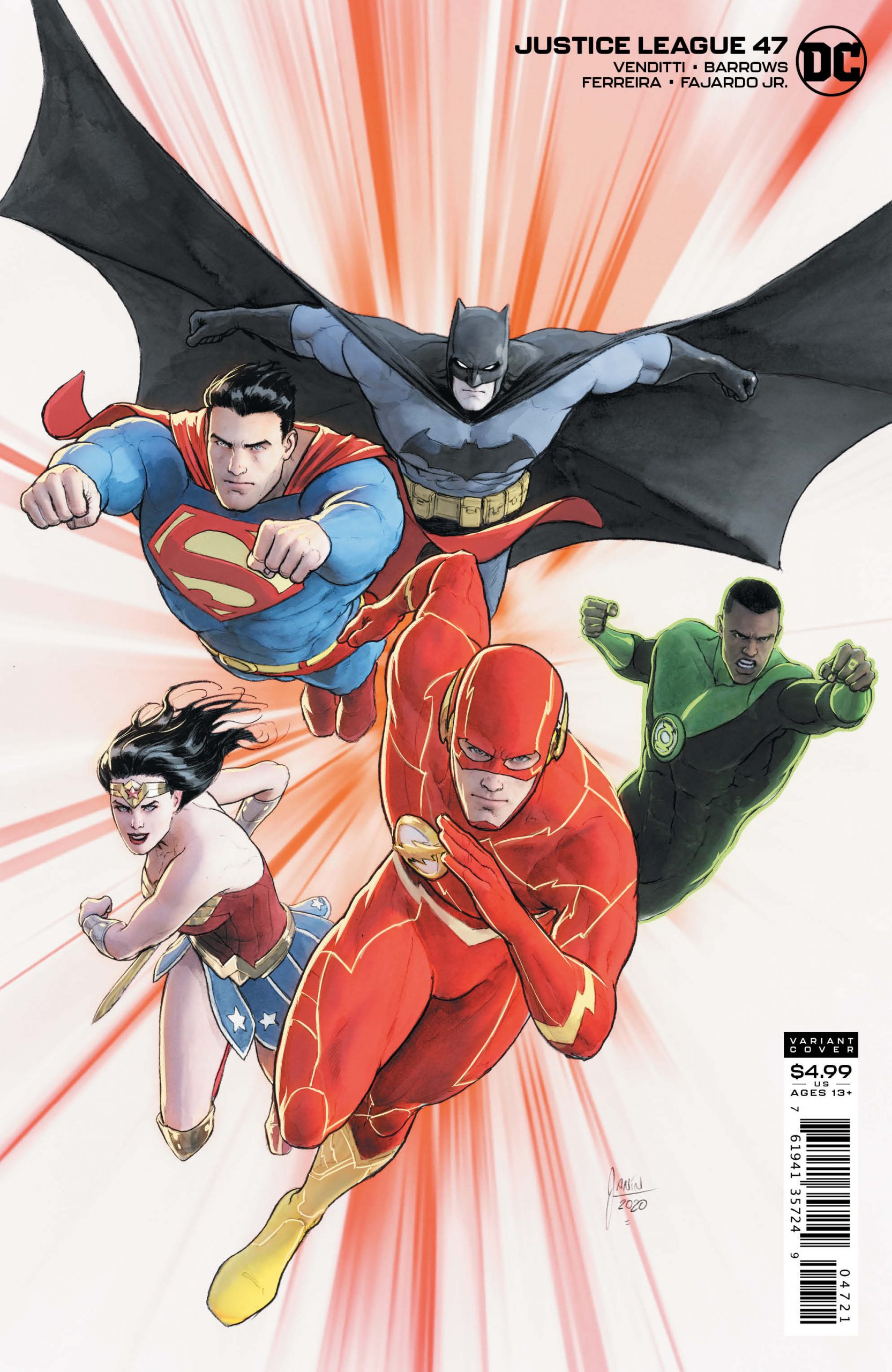 Everyone hugs each other while singing “Kumbaya” in this week’s Justice League #47, as the team learns to forgive one another. Last issue left the League in a lurch, when our heroes were trapped in Tartarus with Jim Corrigan (the Spectre) who’s apparently dealing with PTSD when suddenly they were ambushed by Tartarus, the god of…well, Tartarus.

Look, I get it; as a storytelling medium, comic books are not known for subtlety. But, man – it feels like Robert Venditti doesn’t even try in this issue, as the story wears its theme on its sleeve. It’s bad enough when Jim Corrigan verbally says “I forgive you” to God, but when the entire League starts apologizing to each other, the story dives headfirst into a vat of cheese.

Also, there are moments when the script-writing devolves into a ham-handed recap. Literally, some of the first lines out of Jim Corrigan’s mouth are:

I came here to sever my bond with the Spectre. Didn’t mean to unleash it on the planet and cause a jailbreak in Tartarus.

This sentence smacks of bad writing, as it does nothing but summarize the previous issues. It’s awkward and clunky. 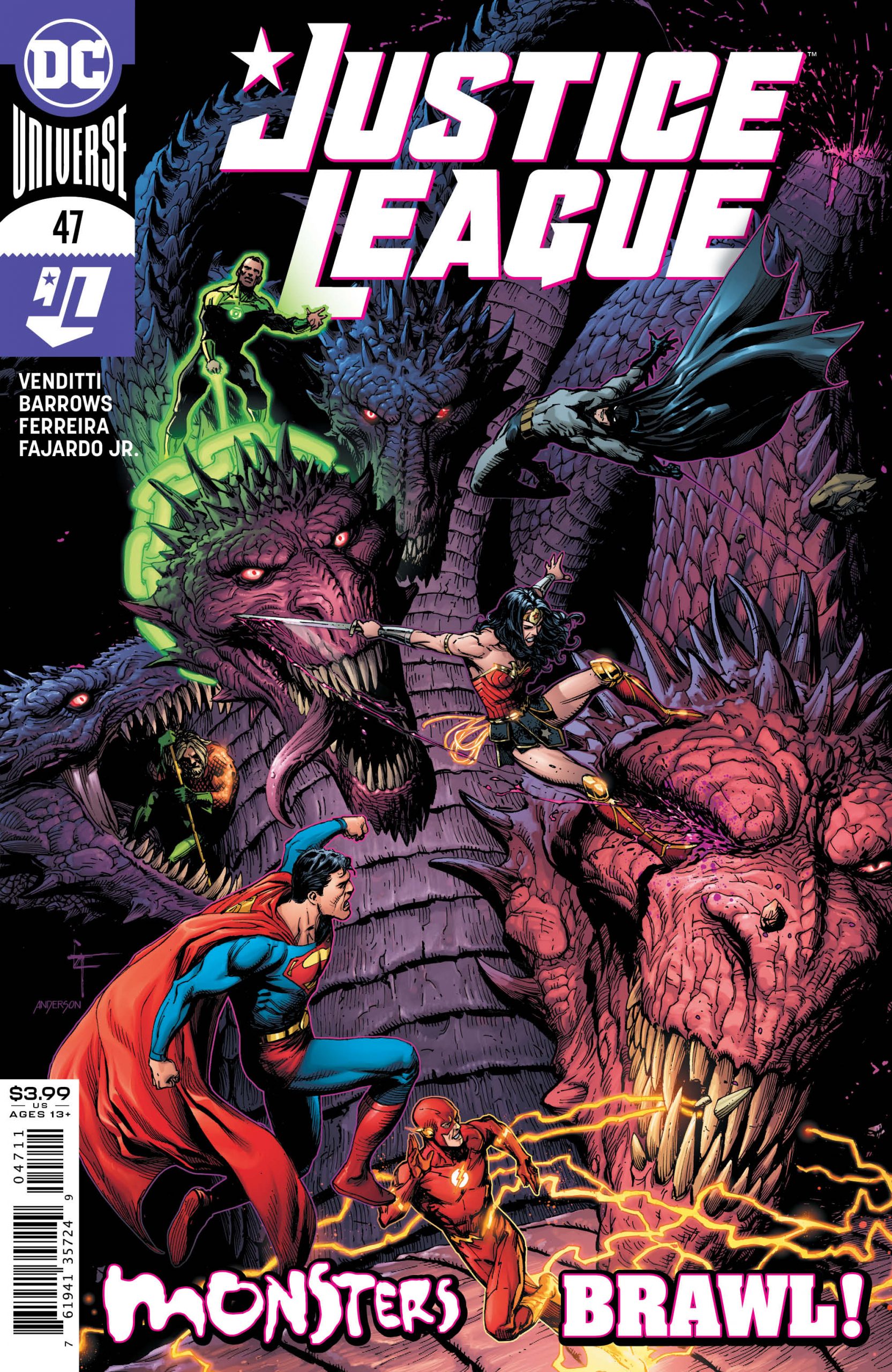 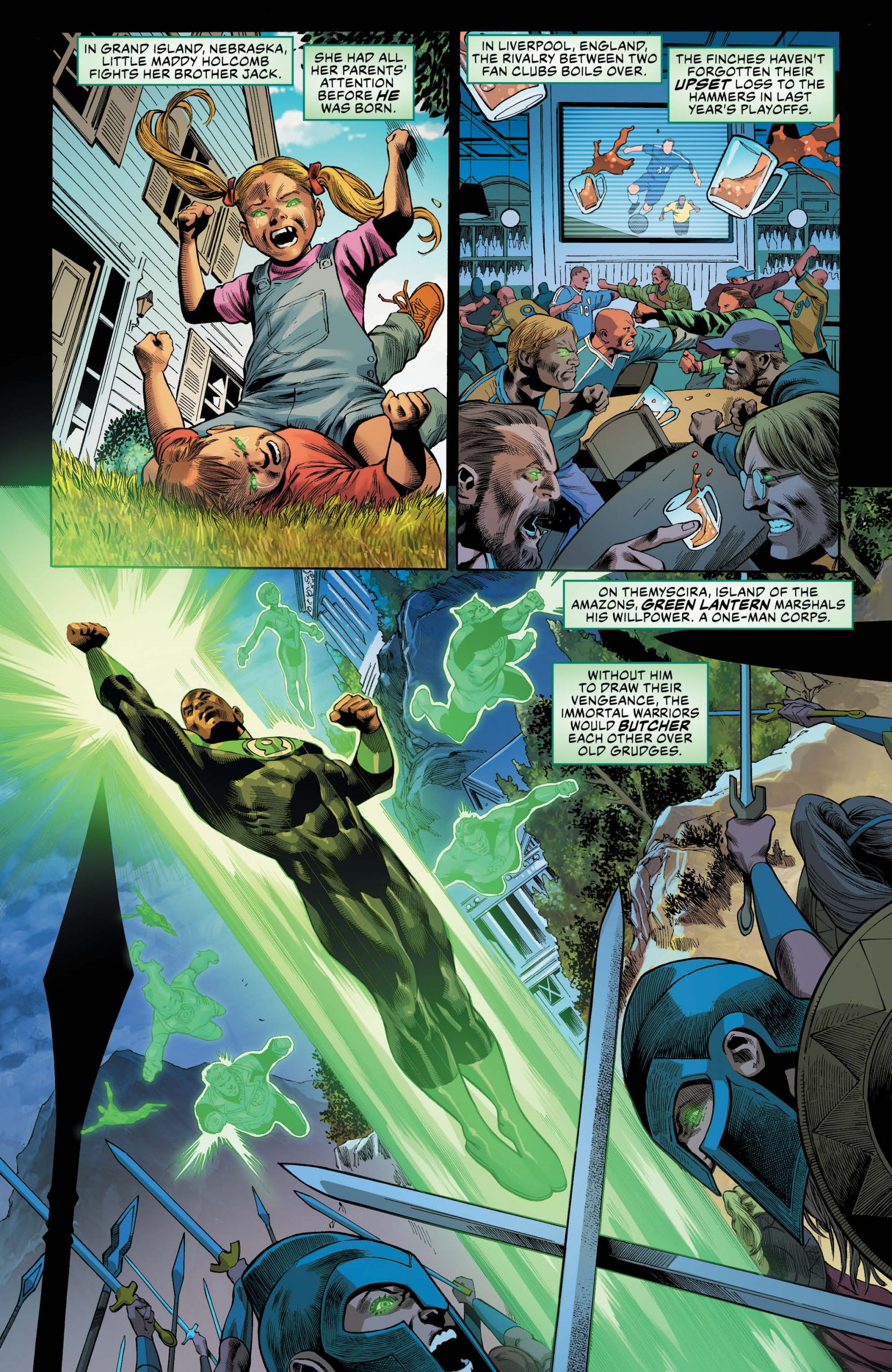 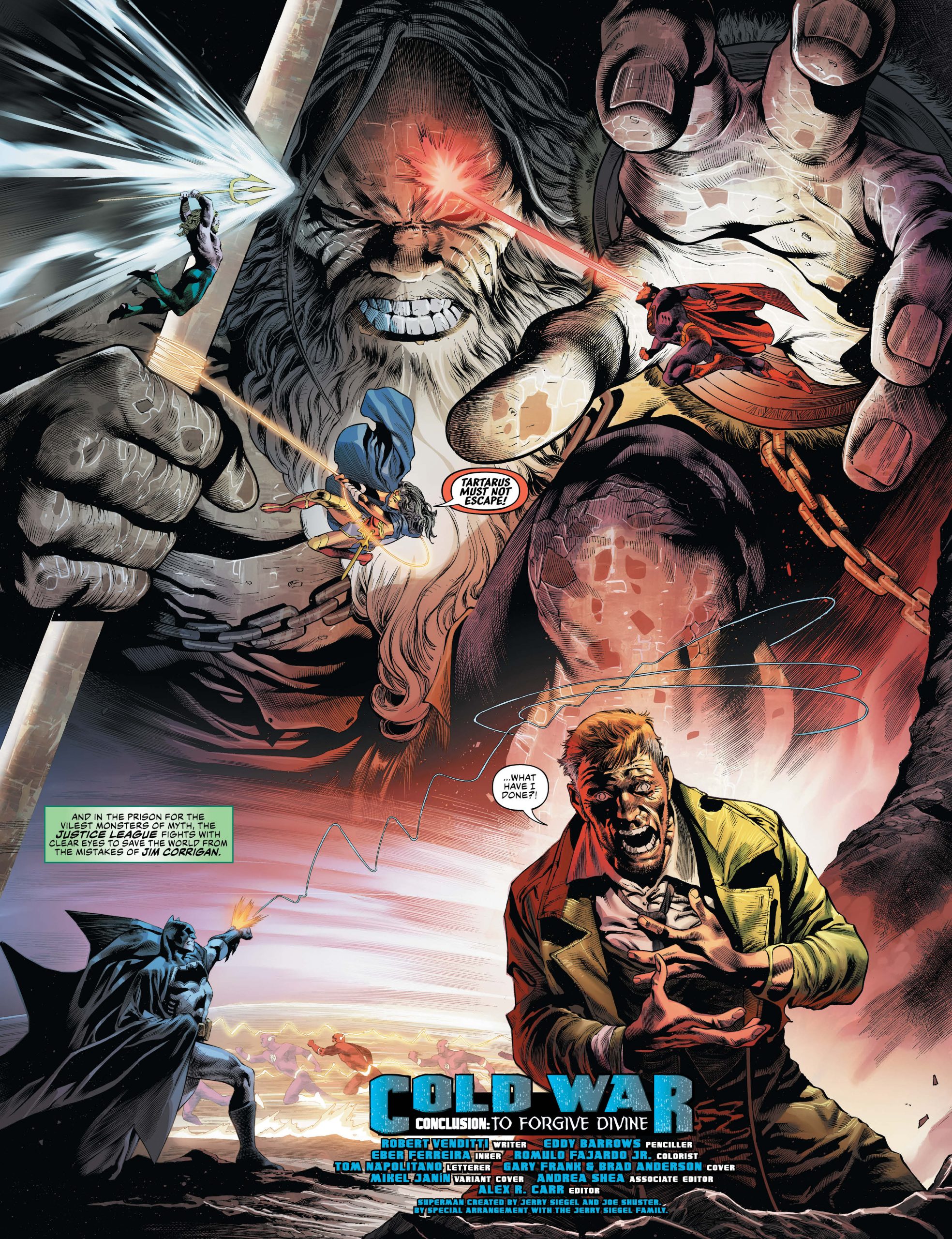 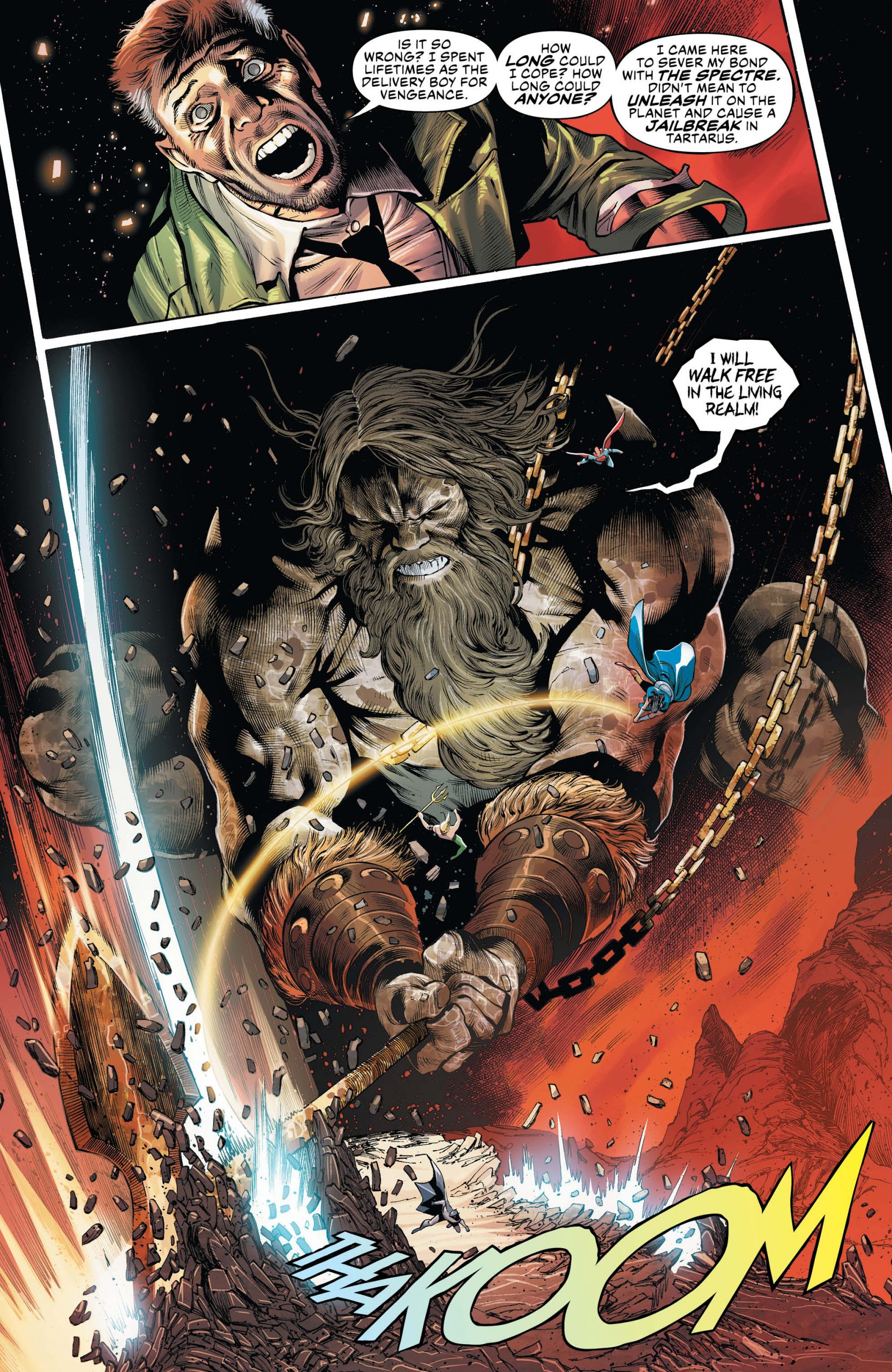 Barrows is Back Baby!

Eddy Barrows returns for the final issue of Venditti’s run, which is by far the best part of this issue. Barrow’s work is as crisp and beautiful as always. He does a particularly good job handling the fight scene with Tartarus, as he utilizes large full shots of the monster, alongside slanted panels, conveying a sense of both horror and chaos. Barrow’s work is eye-candy, and I hope that he returns to Justice League in a more regular capacity.

Justice League #47 is at best a mixed bag, and at worst a disappointment. While Barrow’s work is wonderful, it unfortunately doesn’t make up for Venditti’s crumby script. Frankly, this arc felt truncated – like Venditti had to end his story/run early for some reason. I find this very strange, as there are five more issues (with two different creative teams) before Justice League #52, which starts its crossover with Dark Nights: Death Metal (written by Joshua Williamson, with art by Xermanico). In short, I was right; DC was just stalling for the Death Metal event.

Final Verdict: This issue is like the mead shot out of Odin’s behind (look it up) – it’s just bad poetry, in my opinion.