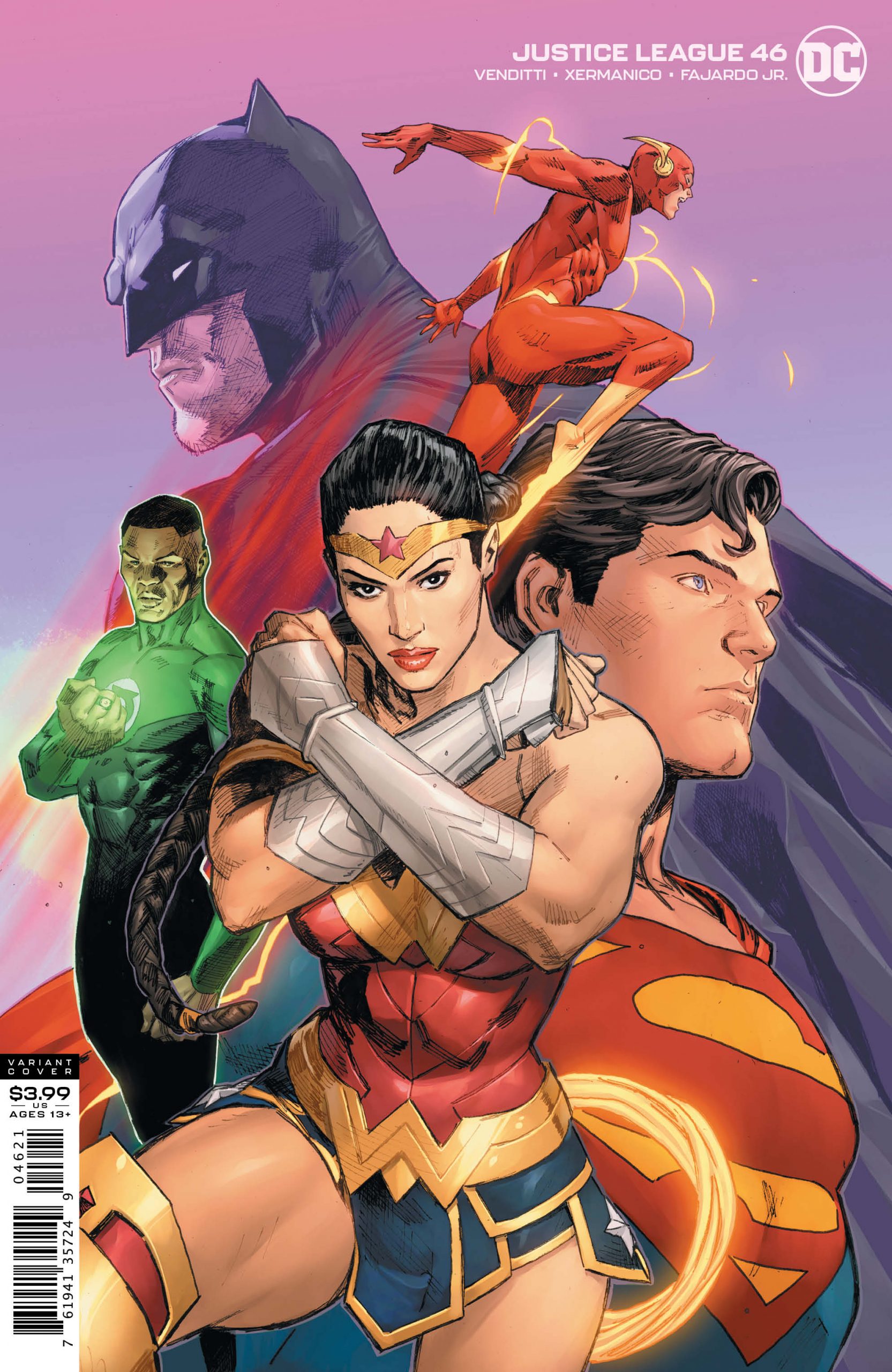 Amazons abound in this week’s Justice League #46, as Wonder Woman and the rest of the League square off against an army of vengeful women warriors.

Jim Corrigan had enough of being God’s spirit of vengeance, so he decided to seal himself in Tartarus – the Greek mythological version of Hell, which is guarded by the Amazons on Themyscira. With Corrigan in exile, the Spectre is running wild. No longer tethered to a human host, Spectre’s vengeance has spread across the world. Therefore, it’s up to the Justice League to restore Corrigan, in order to prevent mankind from destroying itself.

There’s only one slight problem: Themyscira has a strict “No Men Allowed” policy. Having broken the Amazons’ most sacred rule, the League finds themselves at odds with an army of angry women, who are under the influence of the Spectre.

One of the highlight’s of Venditti’s script is his elevation of Wonder Woman. In Justice League #46, Diana takes charge amidst a complicated situation. Venditti highlights her tactical prowess, as she gives orders to different team members to counter each of the Amazonian’s attacks. In this issue, Diana is treated as a leader, brilliantly anticipating each offensive move made by her sisters. Frankly, it’s nice to see Venditti give her some well deserved and positive screen time. 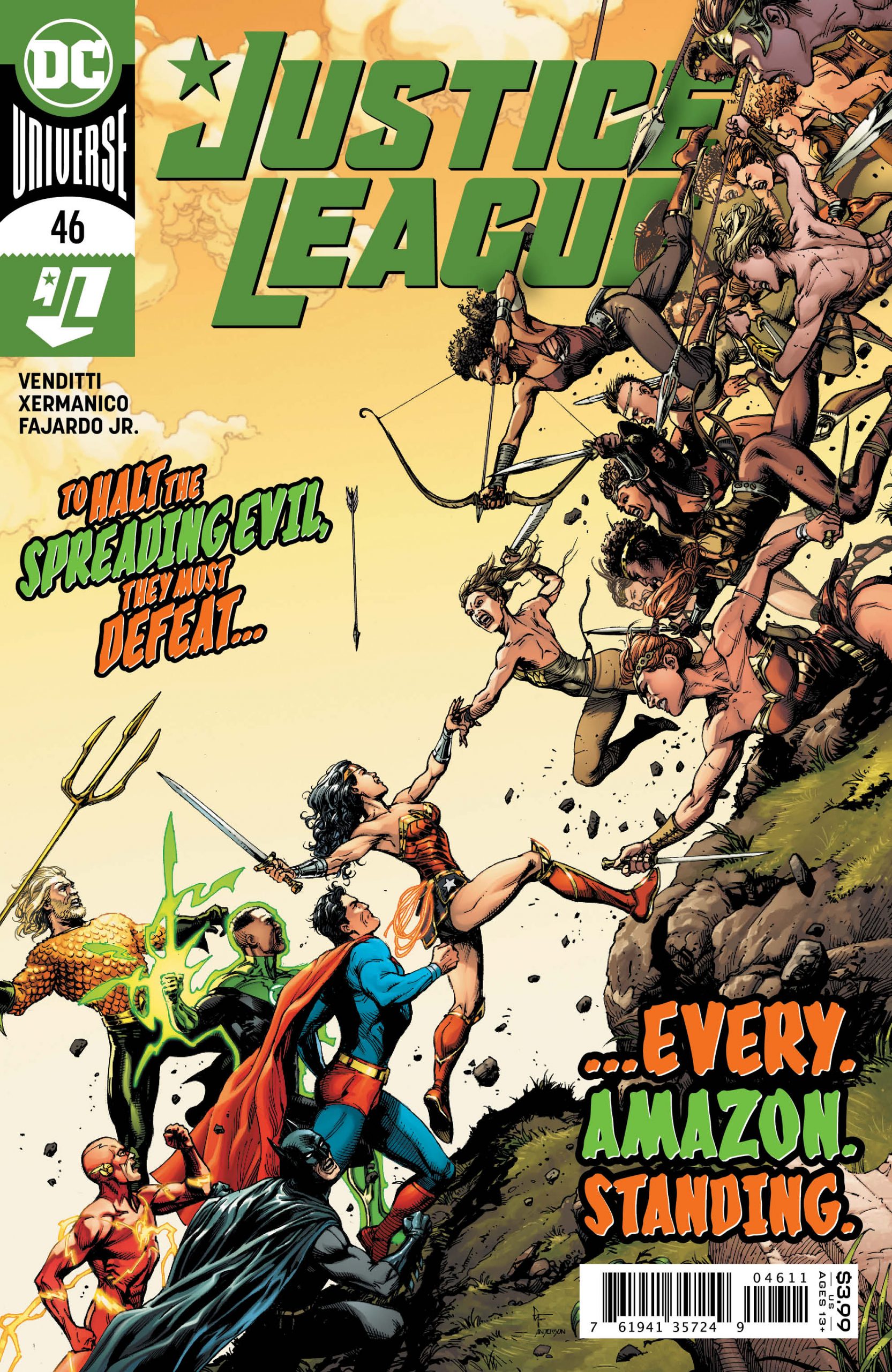 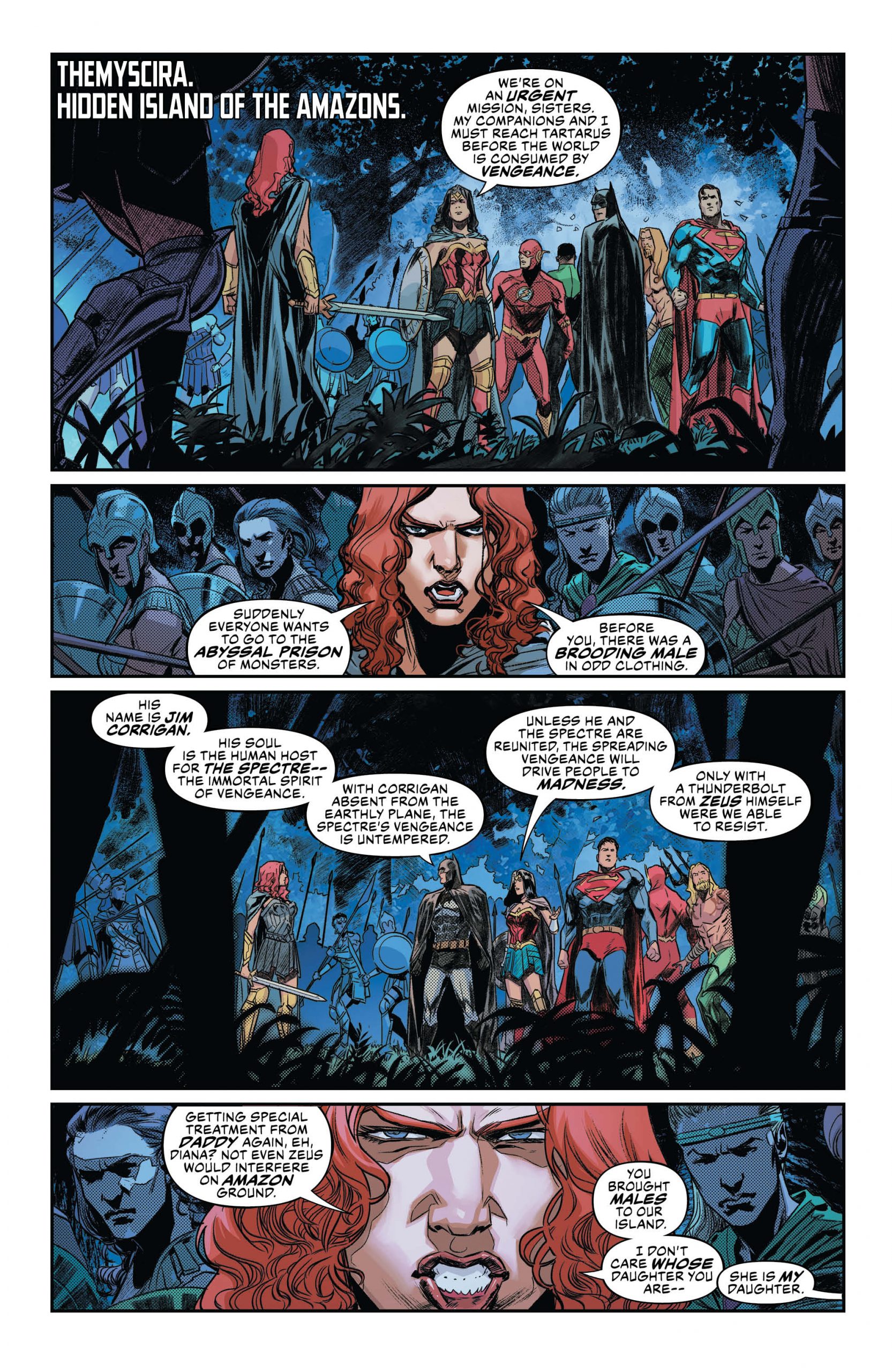 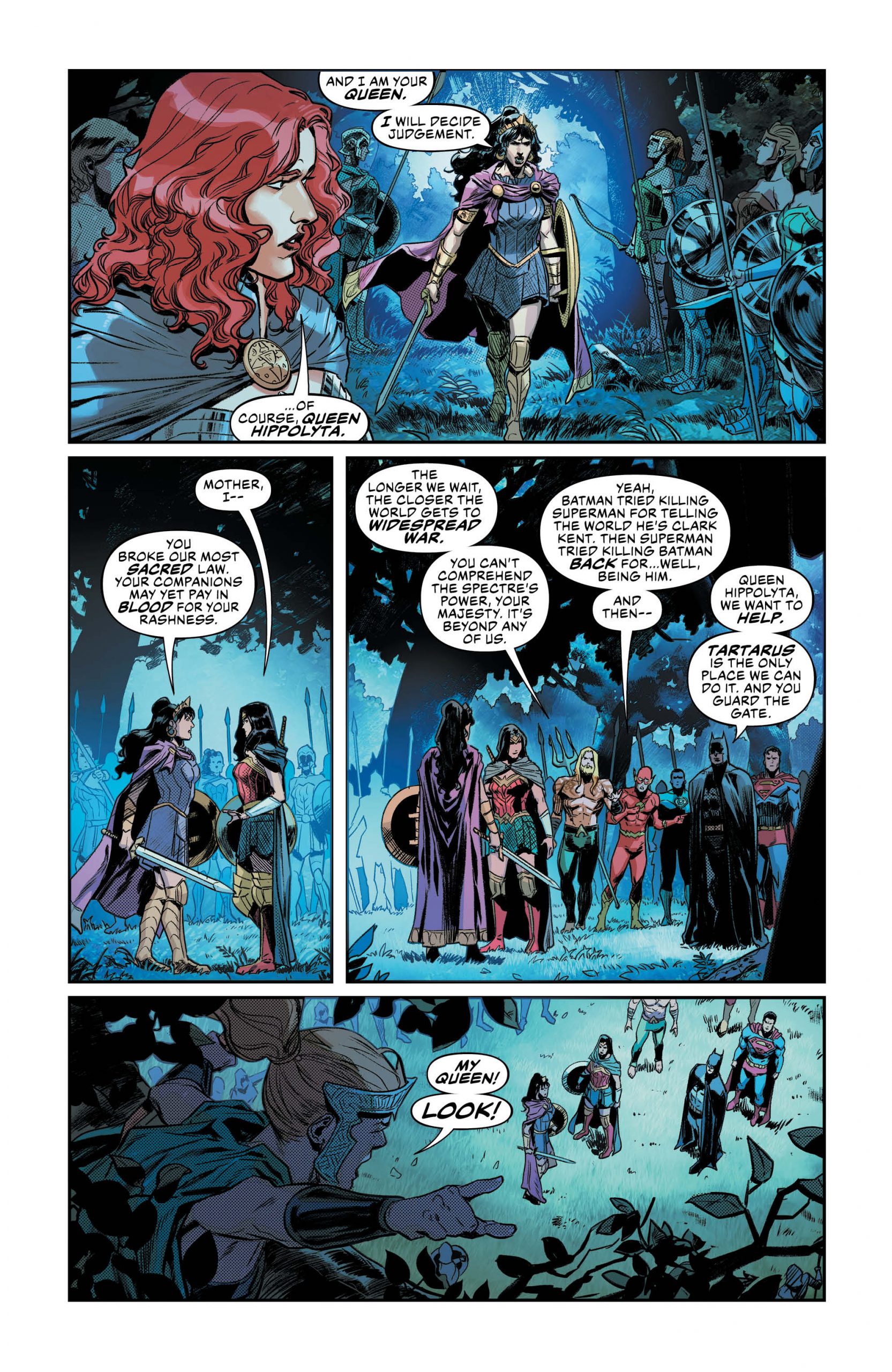 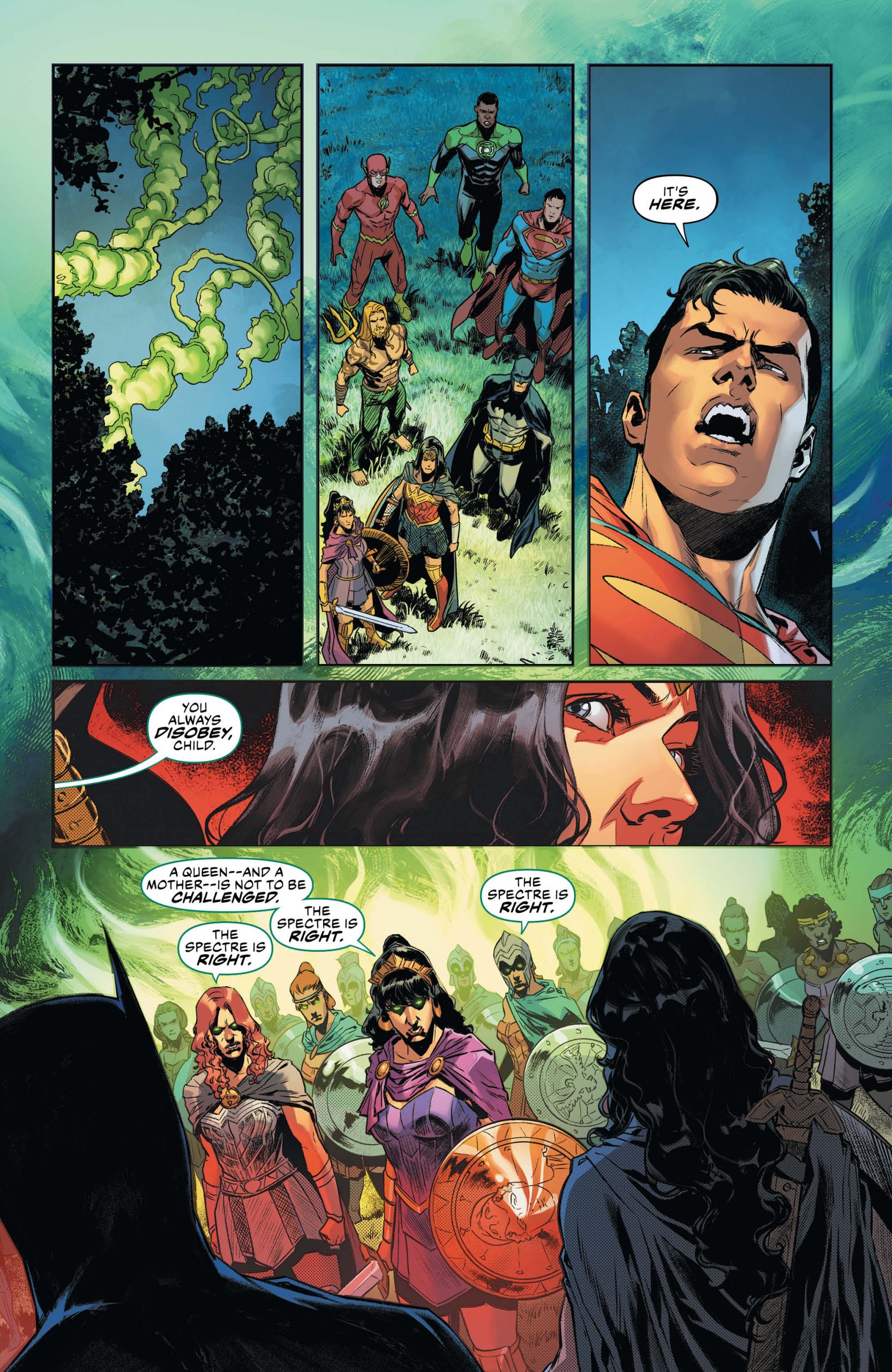 Once again, we have yet another set of artists drawing and inking the title. I have to say that I’m mildly disappointed, particularly after last issue’s strong showing by Eddy Barrows. I know that the current run on Justice League is essentially filler, but I really wish they’d stick with a single artist – or at least wait for an arc to finish before changing them. The frequent switches are noticeable, and distracting.

This issue features a team of three artists working on pencils and inks: Xermanico, Daniel Henriques, & Robson Rocha. Honestly, there’s not much to say here. The art is okay. It’s nothing special, but it gets the job done. It’s emblematic of DC’s Jim Lee inspired house style.

Justice League #46 is a standard meat-and-potatoes comic. It’s fun, but nothing amazing. Venditti has been given some leeway with his cast, pulling on larger DCU characters such as the Amazons and the Spectre, therefore, the title does feel integrated into the larger DCU, despite its placeholder status. Xermanico and team do an adequate job – nothing more, nothing less.