Book Review: Batman – The Definitive History Of The Dark Knight

“Batman – The Definitive History Of The Dark Knight” 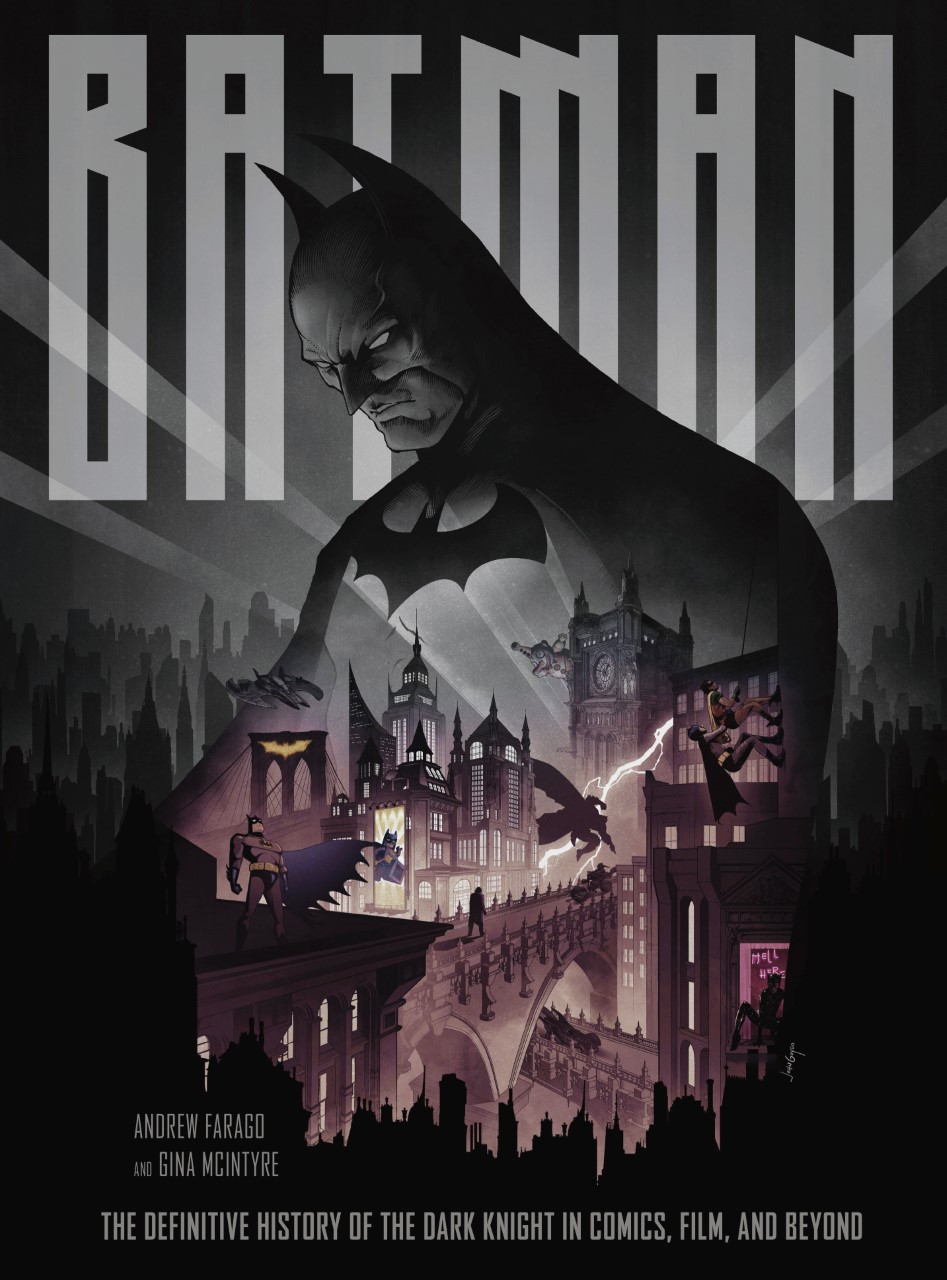 The year, and the decade, are almost over and, for Batman fans, 2019 has been a year to remember. Our favorite comics character, the hero who made this website possible, celebrated his 80th anniversary this year… and what a celebration it was! Tributes, special editions, books, comics, statues, toys and action figures; DC Entertainment, and all the wonderful manufacturers and licencees of Batman merchandise and paraphernalia truly delivered some exquisite collectibles this year. I’ve already reviewed both the delectable Detective Comics #1000 collections, but there was one other book that came out this year that I was giddy as a schoolboy about getting my grubby little mitts on, as soon as it was announced. That book is “Batman – The Definitive History Of The Dark Knight.”

This book is a genuine must have item. 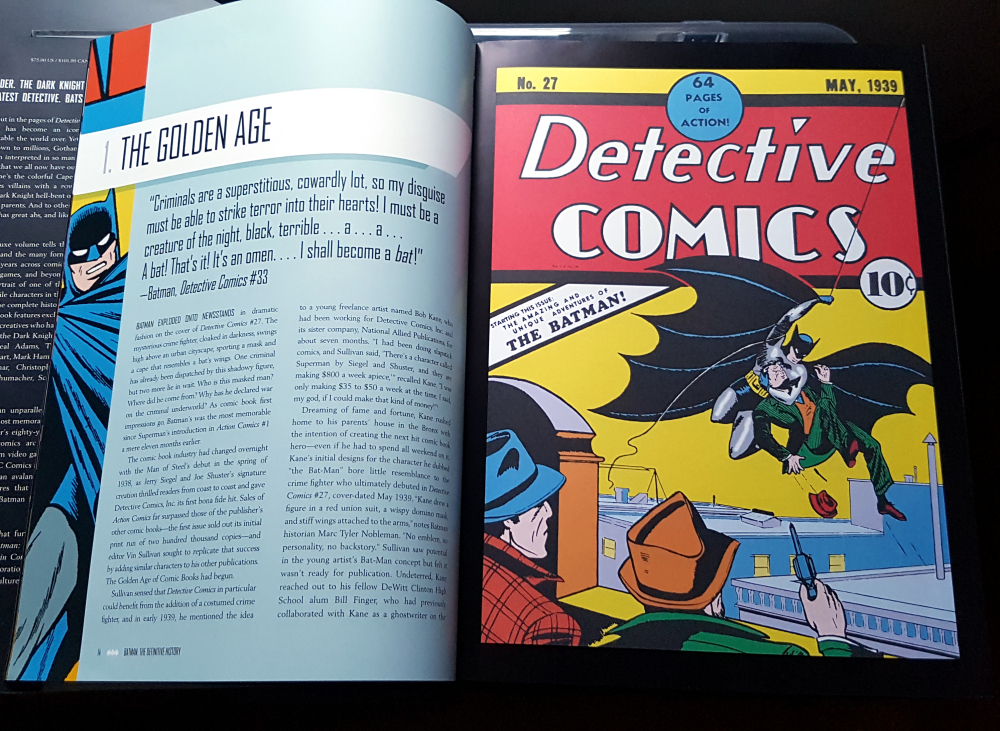 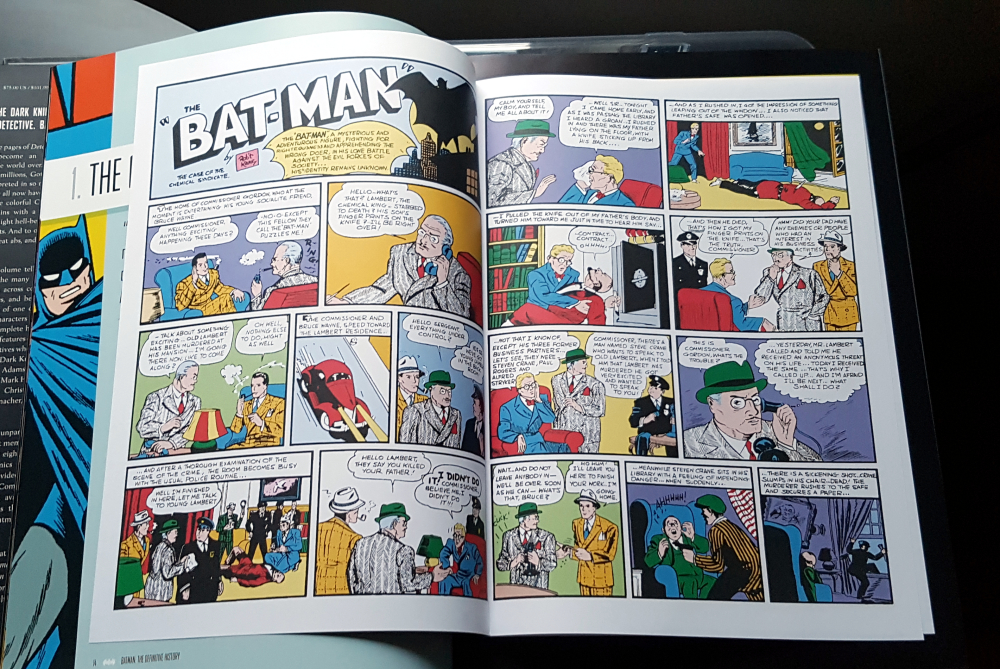 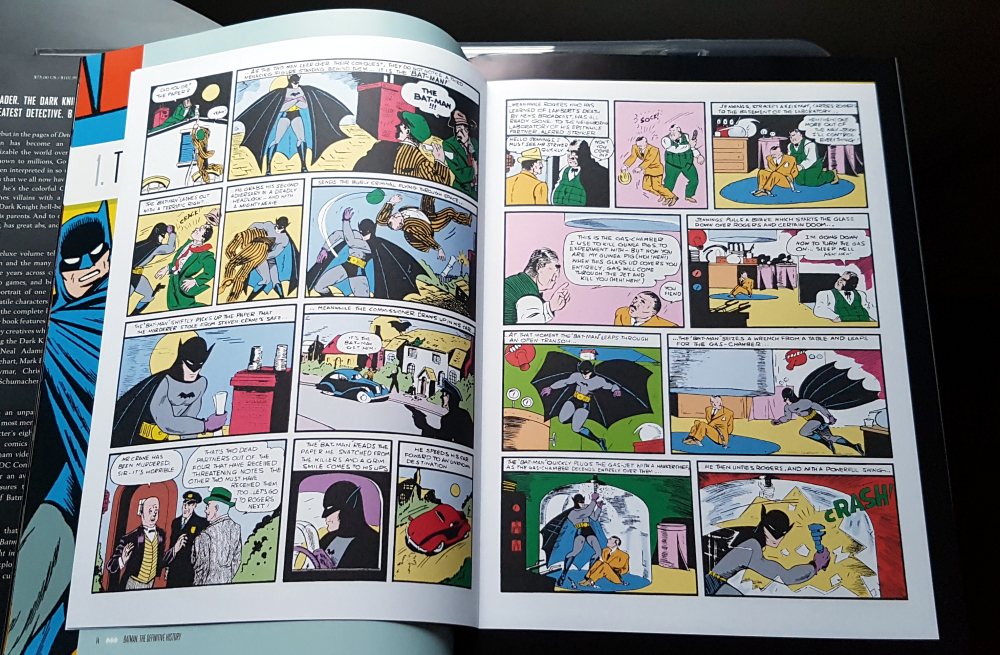 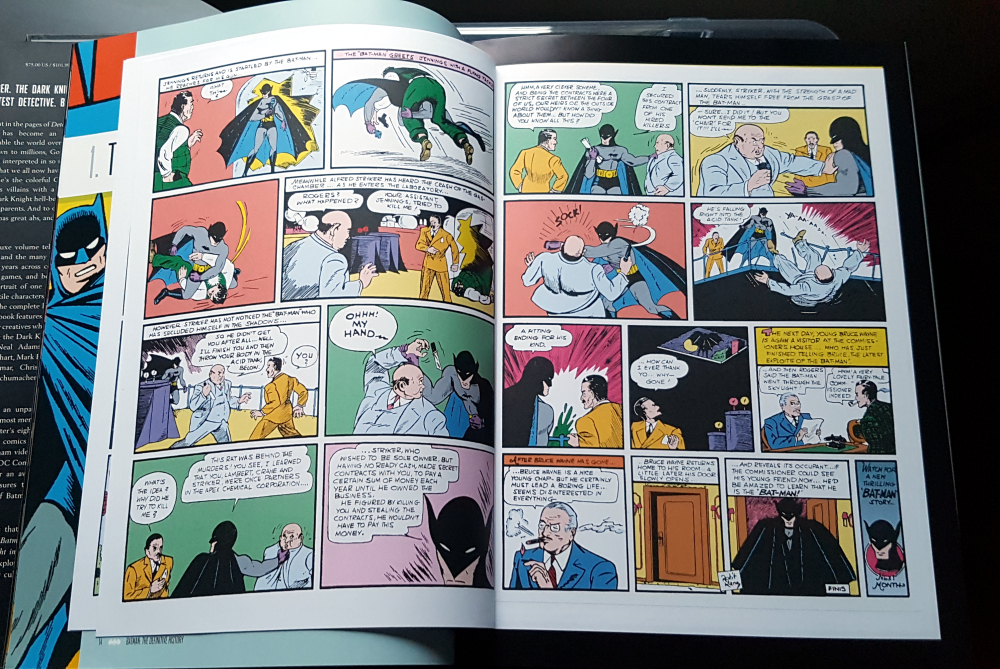 More Than A Book

Insight Editions produce some truly beautiful volumes, and this book ranks amongst the finest they’ve ever made, and the best I’ve ever read. Writers Andrew Farago and Gina McIntyre have crafted a lexicon of Bat-lore that can only be described as a labor of love. The painstaking research and study that’s gone into creating this tome is mind-boggling. This is the kind of book I’ve always longed to write, or contribute to, so owning it has brought me real joy.

Yes, this is a text book, but written with so much love for the character that readers immediately know that the creators behind it are as much Batman fans as we are.

Actually, calling this a text book is far from complimentary, and also wildly inaccurate. I don’t know if an adequate description exists, to be honest. It’s far more than a guide, and so much better than an encyclopedia. It’s full of beautiful art, previously unseen photographs, scripts, character designs, archive material, storyboards and so much more.

Some of the very best bits, though, are the inserts. Oh, my…. 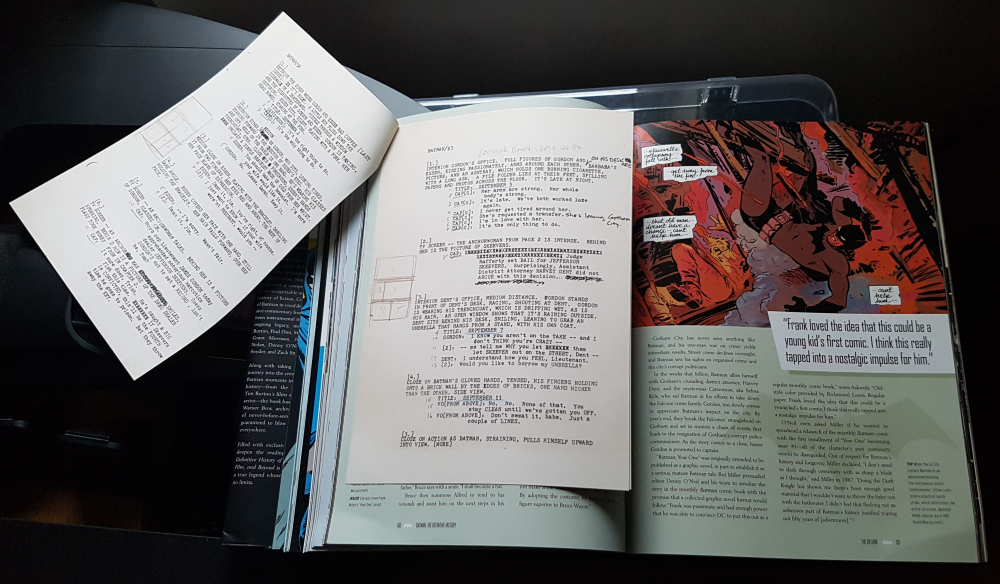 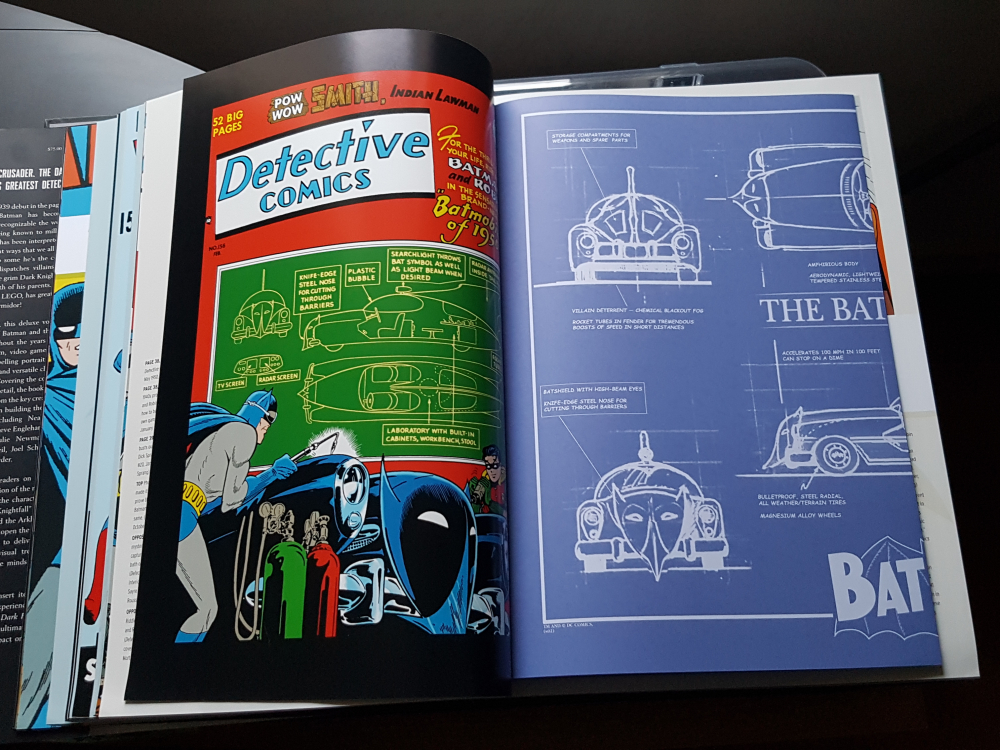 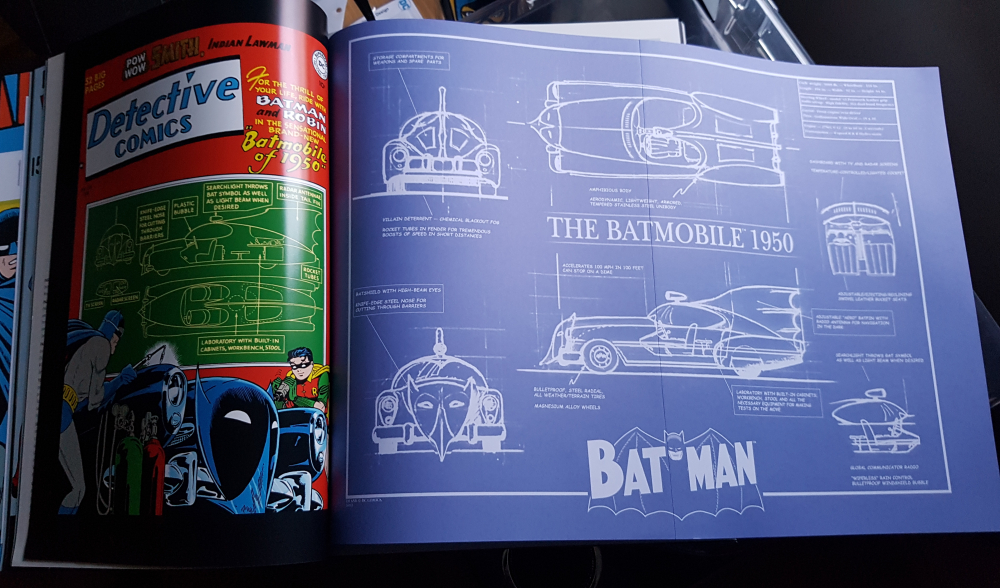 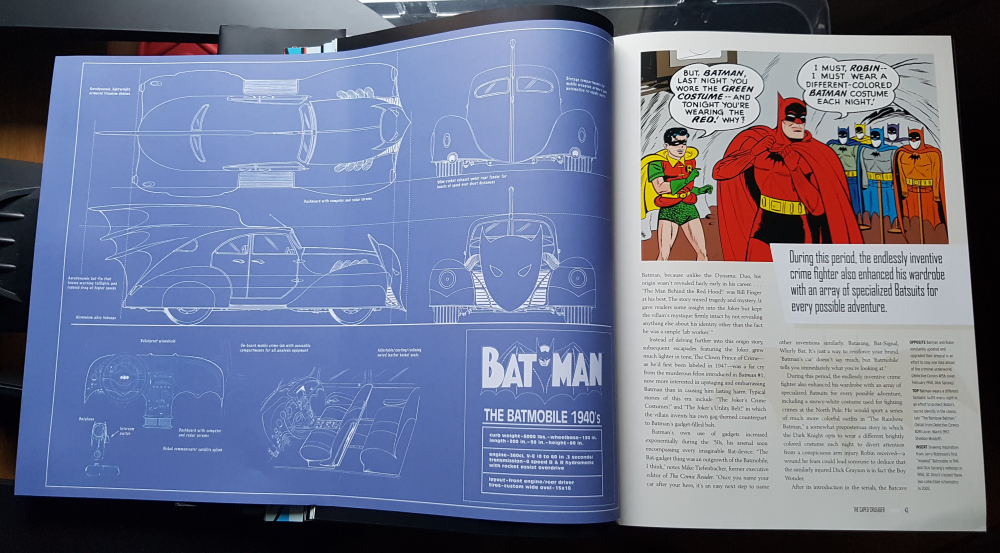 Enough Stuff To Fill a Batcave

Batman – The Definitive History stands out from every other reference book out there for many reasons; it’s HUGE, it’s heavy, it has almost 400 pages… and it’s far more than just a book. Looking at the photos I’ve attached to this review, readers will be able to tell that hidden within, and sometimes attached to the pages of this wonderful volume, hidden treasures are waiting to be discovered. Sometimes they look like a picture in the middle of the page, like the beautiful facsimile of Batman’s first ever appearance from the pages of 1939’s legendary Detective Comics #27. But then, you open the cover and find Batman’s debut tale reprinted in its entirety!

This happens several times throughout the book, and every discovery is a gem. Comics scripts, Batmobile blueprints, movie character designs, storyboards. This book has all of these… and more! 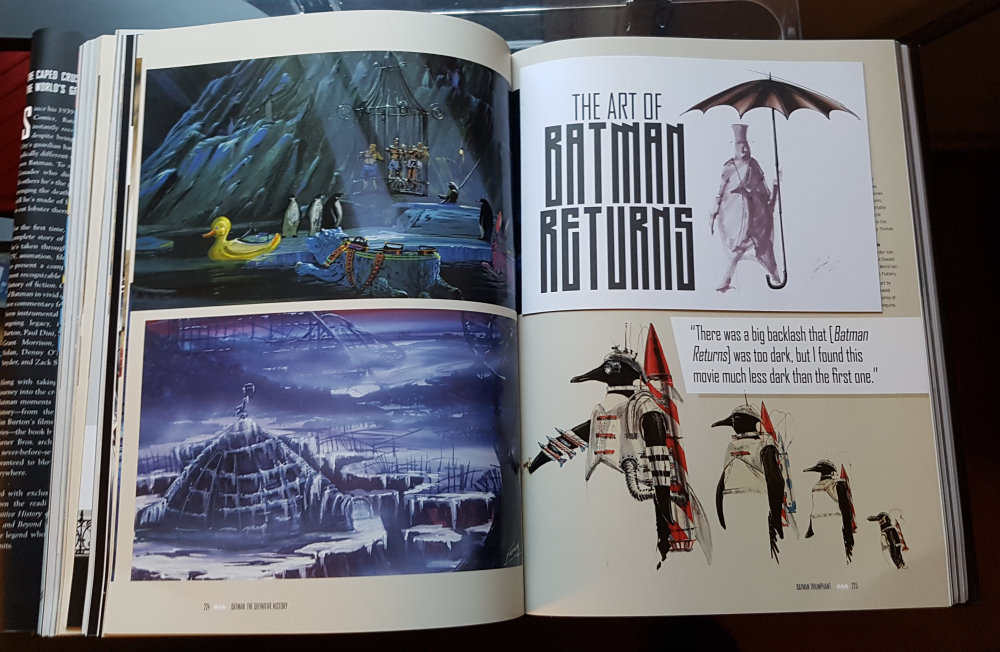 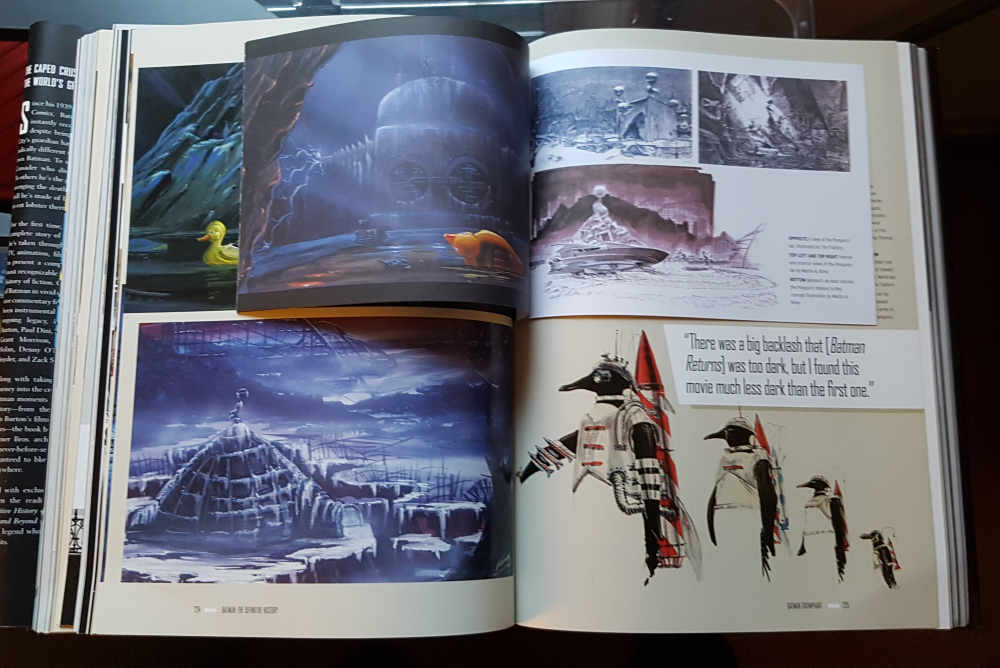 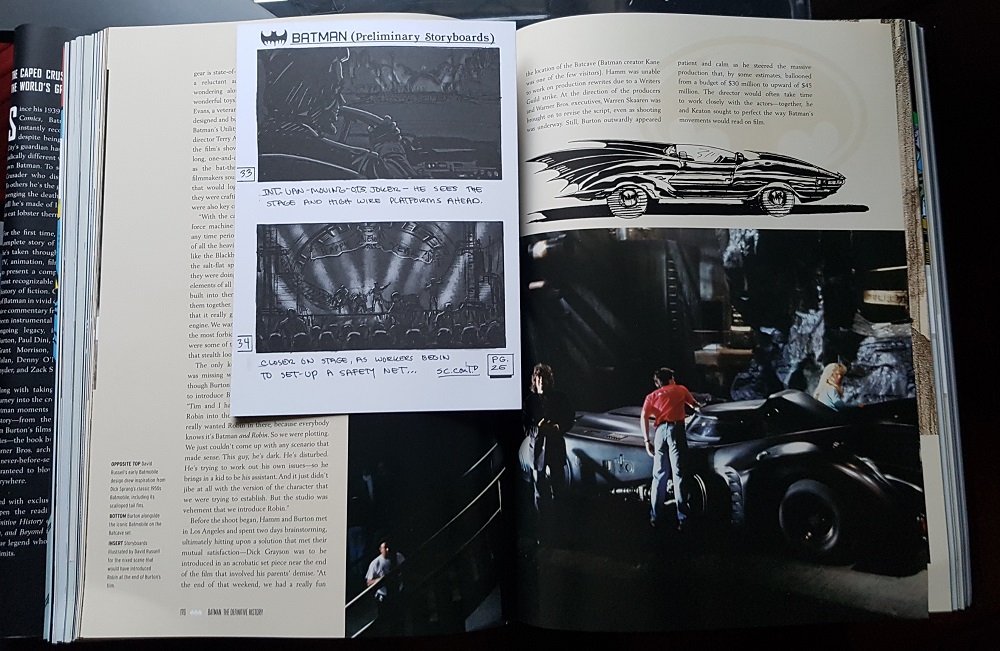 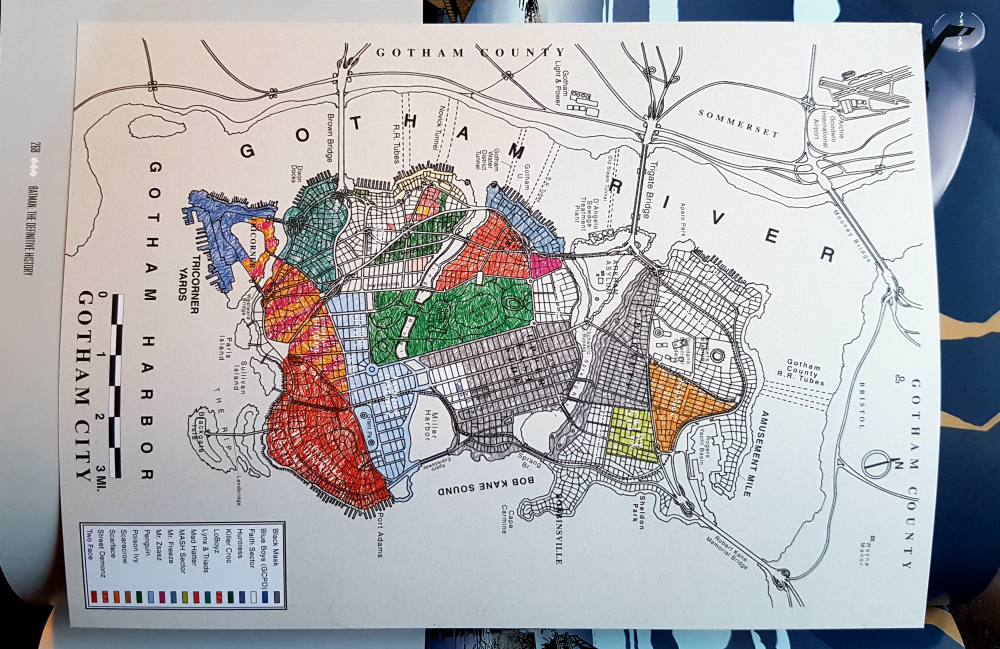 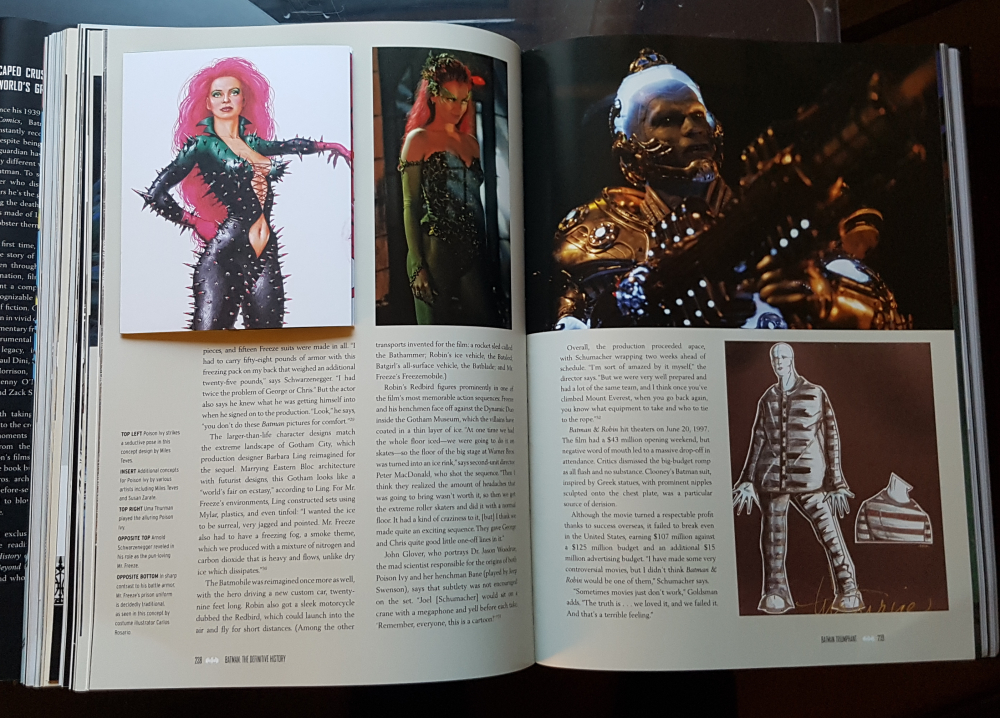 Some of the delights contained within this book are completely mind-blowing. A few months back Mark Hamill voiced the joker over animated storyboards for the infamous Robin scene, which was slated to be a part of Tim Burton’s 1989 cinema classic, Batman. Those very storyboards appear in this titanic tome!

Then there are the dozens of behind the scenes movie photos, newly revealed anecdotes, and previously unrevealed secrets. I thought I knew a lot about Batman, but this book could make even a new fan an authority.

I also gained new appreciation for some of the Batman related projects of the past that perhaps didn’t hit the mark, commercially or critically; like the much maligned Batman & Robin movie. The Poison Ivy character designs, and conversations with the cast and crew, shed new light on the film, and its production. We forget that, even if we don’t like a film, TV show or comic-book, that piece of art is still somebody’s hard work. Whether the end result meets with our approval or not, respect must be given to the people whose blood, sweat and tears went into making them. 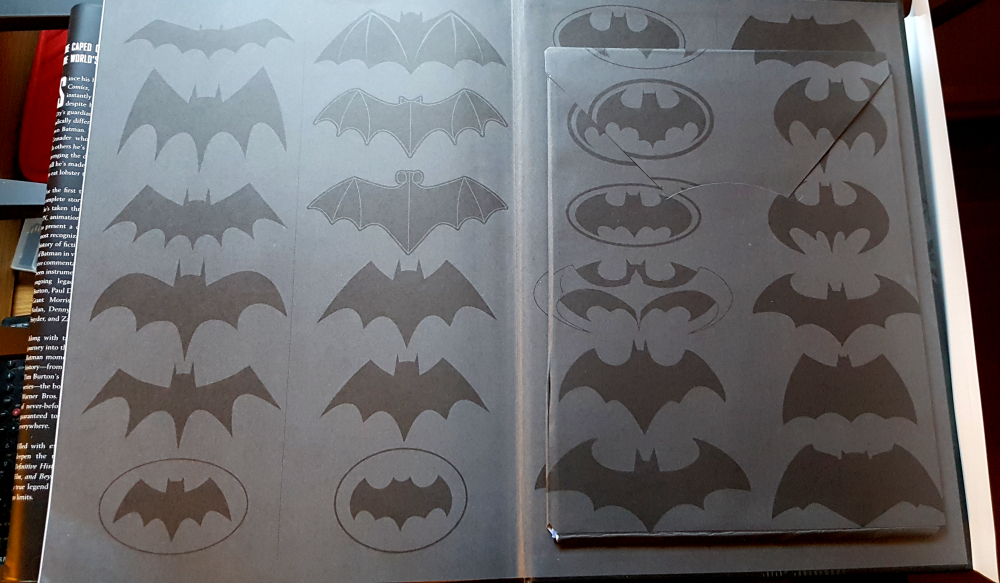 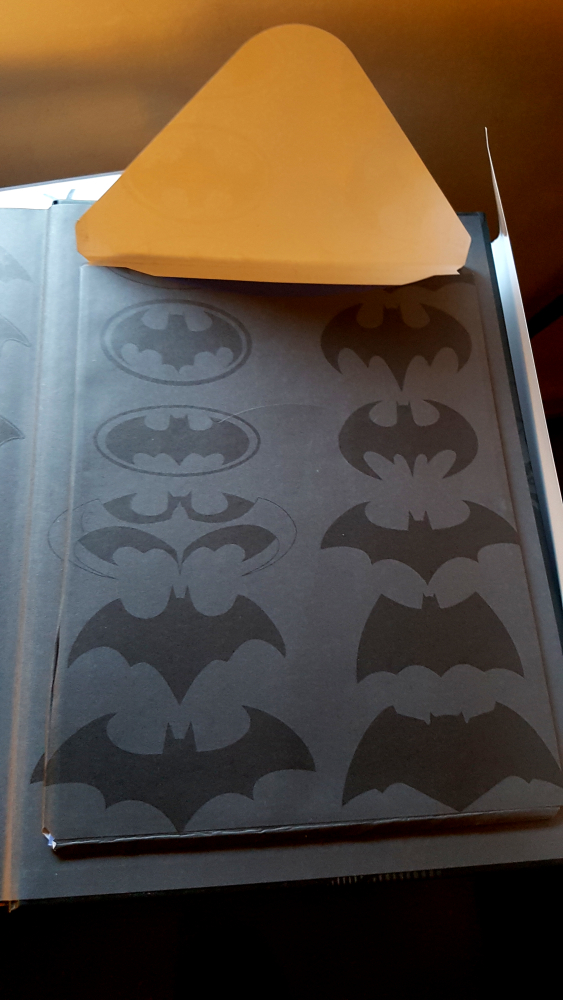 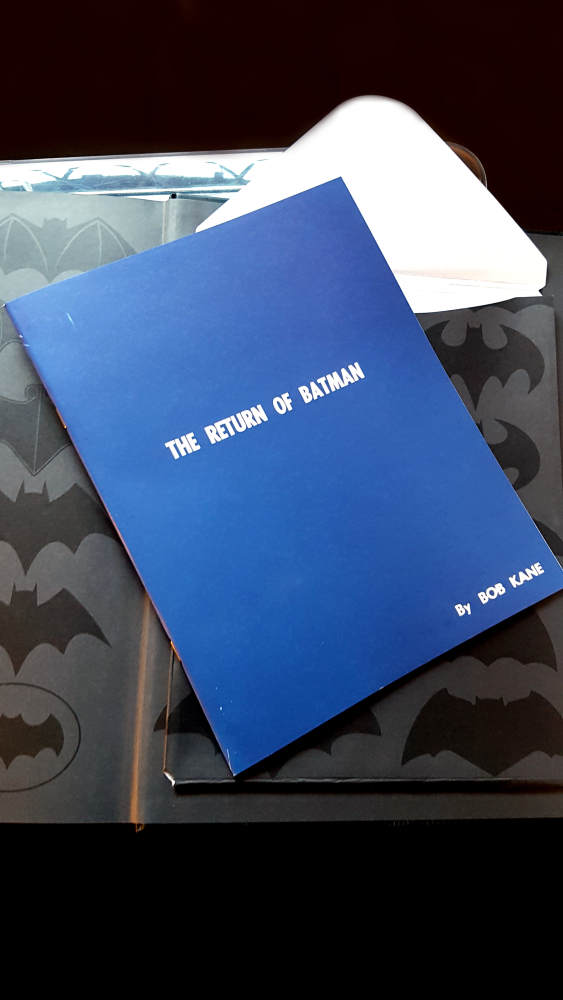 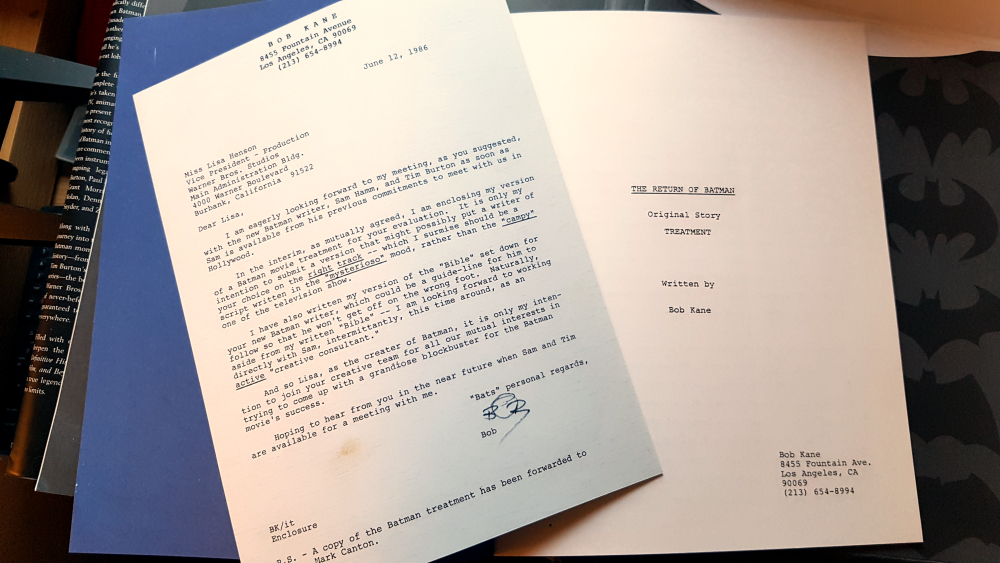 Even when you reach the end of the book, Batman – The Definitive History is the gift that keeps on giving. Hidden right at the back of the volume, in the inside back cover, is a Bat-Logo festooned envelope. What’s hidden inside almost blew my Dark Knight mind!

What more could any Bat-Fan ask for than a movie treatment written by Batman’s co-creator, Bob Kane?!? Inside this script is a faithful reproduction of Kane’s letter to Warner Bros. and Tim Burton, complete with coffee stains and a signature. Andrew Farago claims that each stain was individually applied to every single edition. Now, I don’t know whether that’s true or not… and I honestly don’t care. It sounds true, and makes for one hell of an anecdote.

I love this heavyweight, oversized monster of a book. The people that Andrew Farago and Gina McIntyre have spoken to and the stories they’ve told make it a must-read. The artwork is phenomenal, the design is stunning and the content incredible. Batman – The Definitive History isn’t cheap, and it’s not something you can easily carry around, or read on a commute. What it is, though, is an unmissable collectible that no true Bat-fan should be without. You honestly get what you pay for, and it’s worth every penny.

If you’ve got the cash and still need a last minute Christmas gift, aren’t seeing the family ’til the New Year, or if you’re a Bat-Maniac after something extra special, then this is the book for you!

Huge thanks to Eric Chang and Insight Editions for the review copy. Please check out Insight’s other amazing Batman related volume “Anatomy Of A Metahuman” and the wonderful art-book “Masters Of Comics”. I promise that you’ll love them!