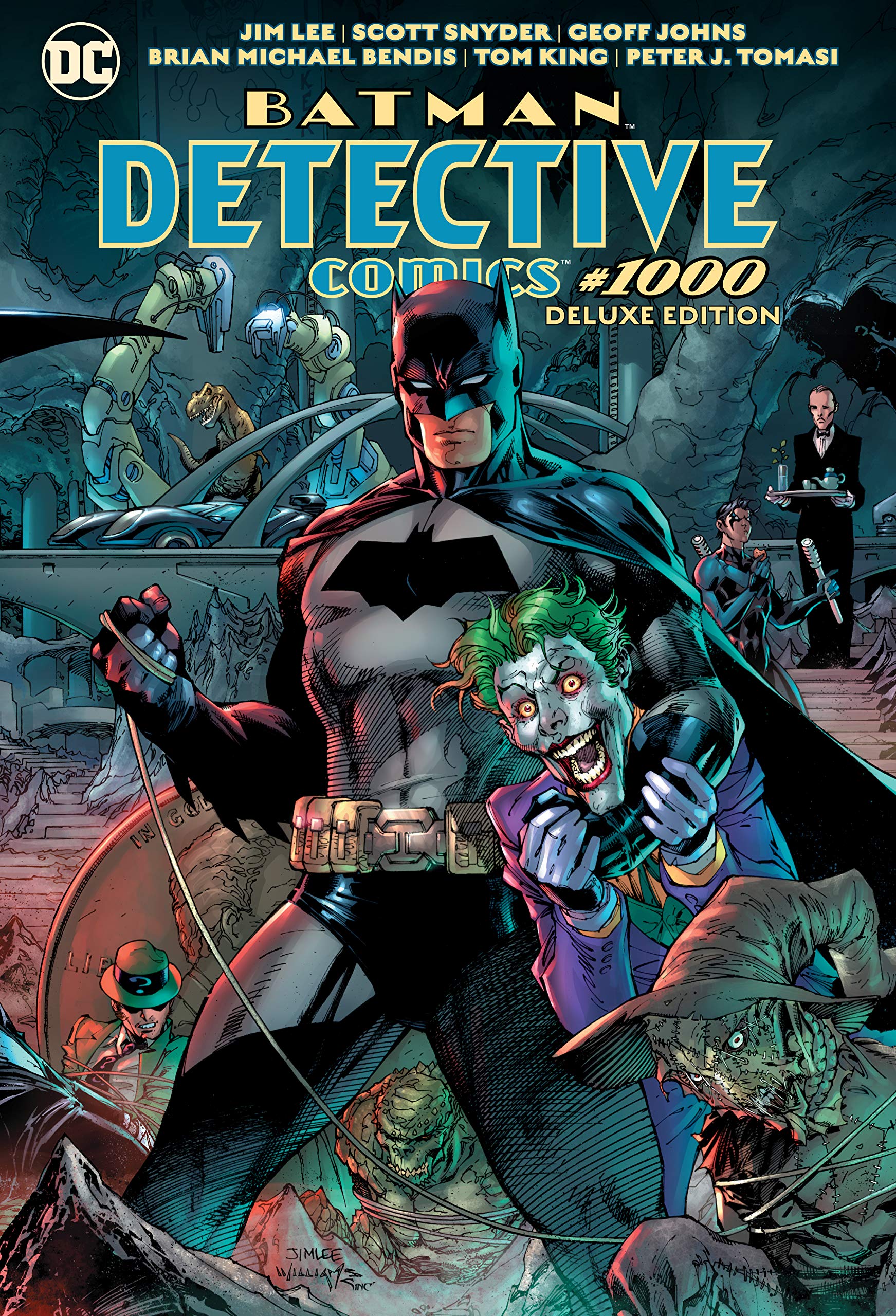 How do you improve on perfection? Detective Comics #1000 The Deluxe Edition answers that question. When we received news that this magnificent comic was going to receive the hardback treatment, collecting the original issue, a ton of the amazing alternate covers and TWO brand new stories my gast was well and truly flabbered. Having purchased and devoured this terrific tome (worth every penny), my gast has been phantasmagorically flabbered.

The best has, indeed, gotten even better. 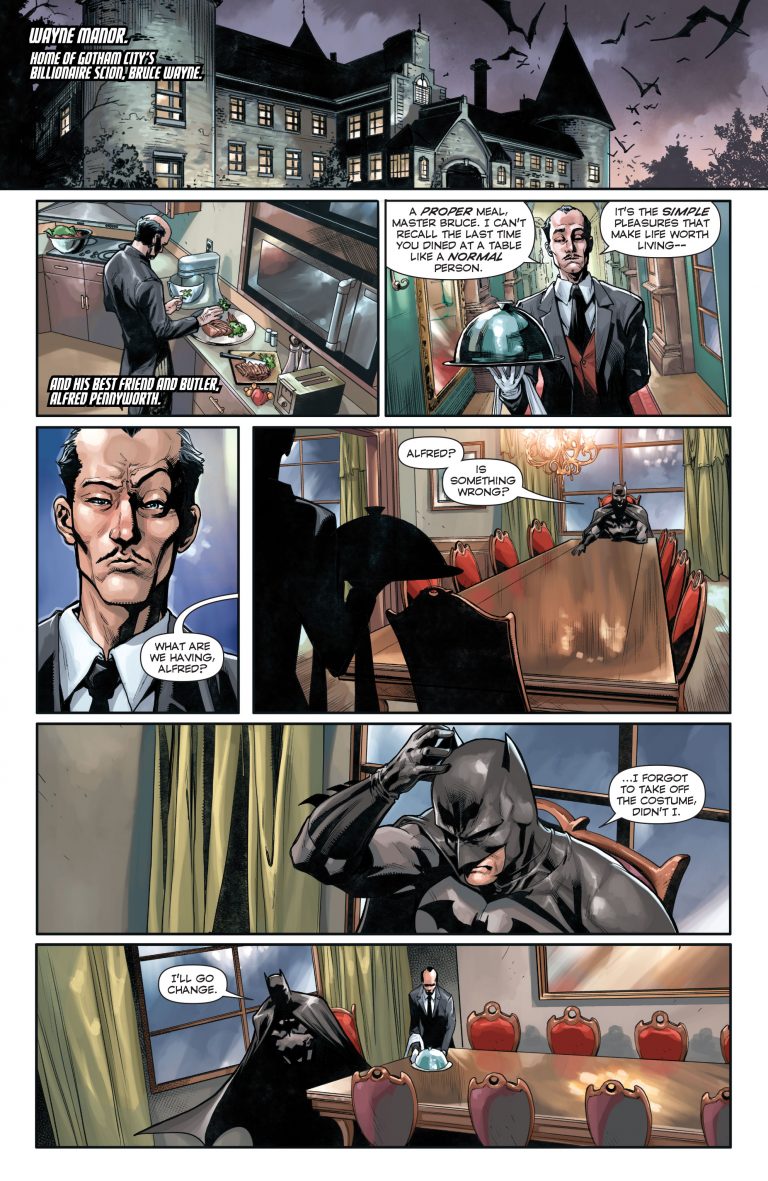 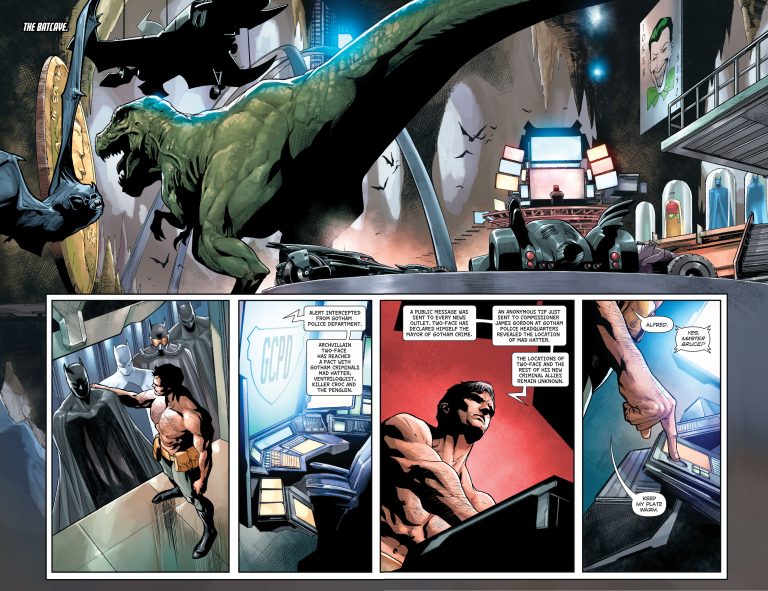 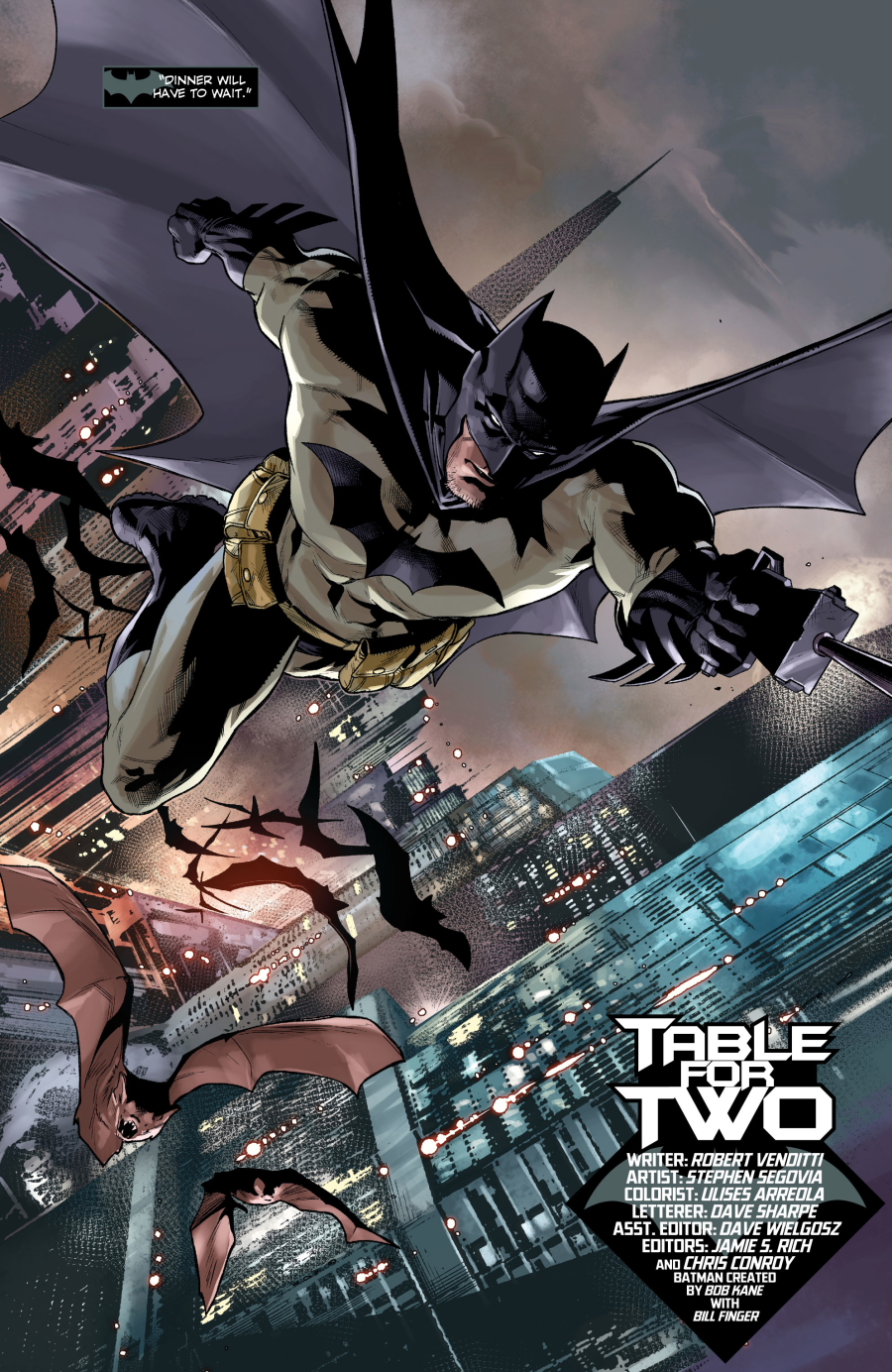 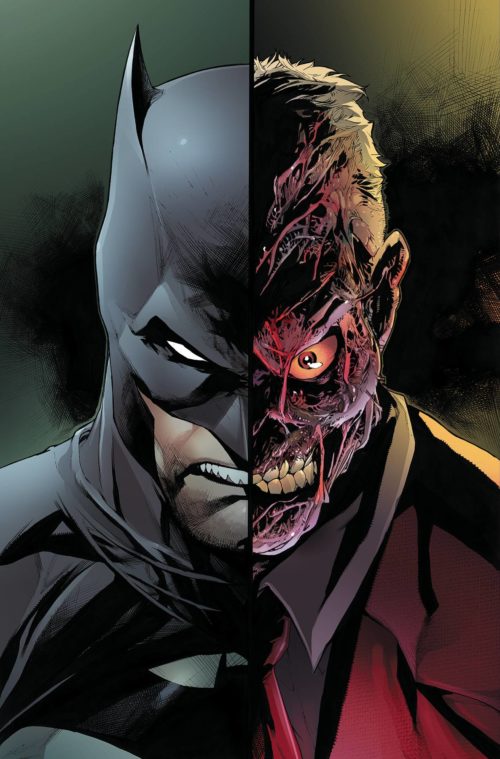 Why aren’t more people talking about Robert Venditti? Here is a writer who clearly knows his stuff; he can write an ongoing saga (you MUST check out his brilliant work on Hawkman) self contained mini-series (if you’re not reading his work on Freedom Fighters, then you’re really missing out) and he can write short stories… “Table For Two” is a prime example.

This guy didn’t just get the brief, he really got the brief. This gorgeous little story is a standalone, action packed, mini masterpiece. It’s a terrific detective story, a love letter to the Batman/Alfred relationship and a fantastic Two-Face tale to boot. Fitting all that into just 12 pages is pretty darned impressive.

Speaking of impressive, Stephen Segovia’s art grows in leaps and bounds every time I see it. His art in the recent “Deface The Face” story arc in ‘Tec was one of the few things I enjoyed about the story. Once again he has given us a brilliant Batman, some great character moments, action, bullets and comic book carnage. This man is well on his way to becoming a megastar.

Ulises Arreola’s color art and Dave Sharpe’s lettering are the polish on this flawless little diamond. Arreola makes Segovia’s already gorgeous line art really pop and the pages a joy to behold. Sharpe is one of the finest letterers in the game and has given us a story that’s easy to read and experience. I love his use of the classic Batman logo font from the 90s on his title and credits. Lovely stuff. 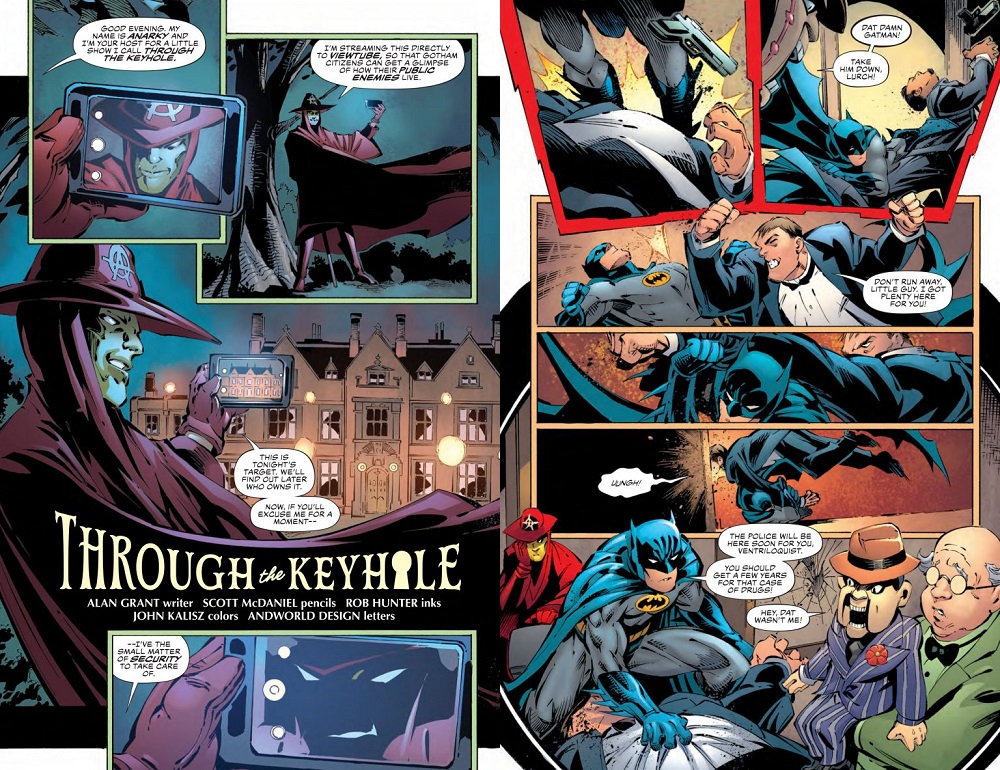 Alan Grant’s importance, and his influence on Batman’s world cannot be overstated. This is the man who gave us the brilliant, psychological series Batman: Shadow Of The Bat and created some of the most incredible Bat Baddies of the time: The Ratcatcher, Victor Szasz, Anarky and, of course, The Ventriloquist and Scarface.

Reading “Through The Keyhole” feels like stepping into a time machine and going back to the 1990s. Anyone who was reading comic-books at the time will know that this was a fantastic time to be a comics fan. We had “Knightfall”, the death and return of Superman, oh… and Detective Comics by Alan Grant and Norm Breyfogle, and Nightwing, drawn by Scott McDaniel.

This story feels just like one of those action packed 90s romps. Scott McDaniel has not only produced some vintage work in this issue, but he, and inker Rob Hunter, have also managed to beautifully channel the late, lamented and sorely missed Norm Breyfogle. Scott McDaniel’s art has always been some of the most kinetic and fun ever, but the way that this version of Anarky feels so Breyfogle-ish really touched my heart. Thanks, guys.

John Kalisz and AndWorld Design also add a whole ton of talent to this time-warp. Kalisz’s color art is very reminiscent of those wonderful 90s books, and the larger dialogue balloons and lettering style from AndWorld Design complete the illusion beautifully. 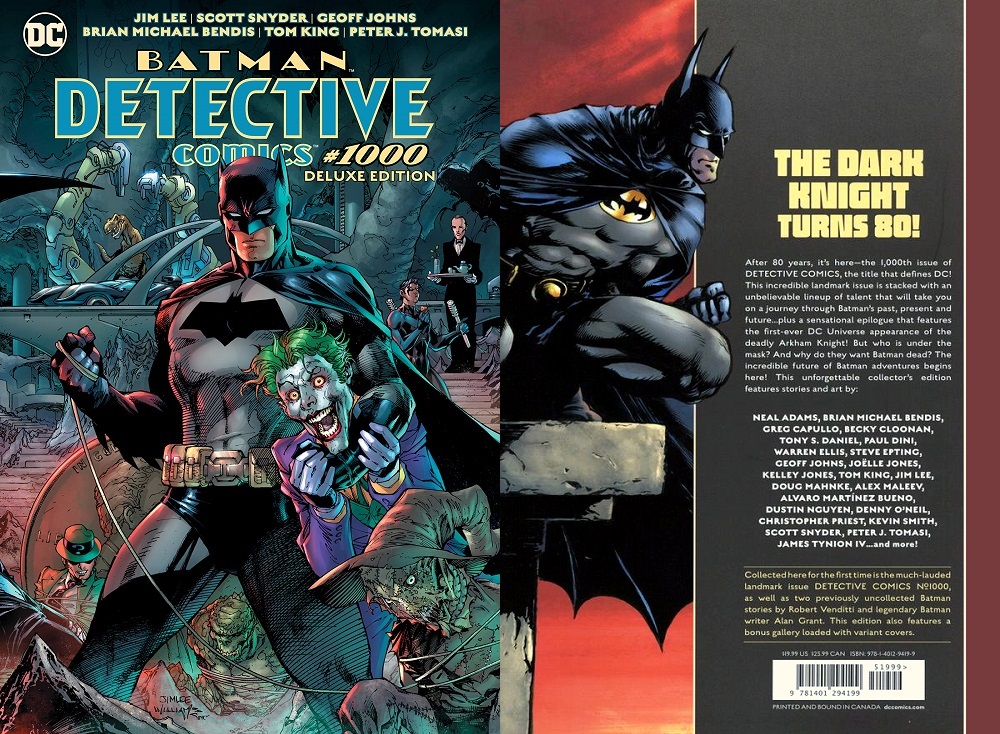 It’s a shame I can’t give a higher score than 10/10. If you’ve enjoyed this review and would like to read my dissertation on the the rest of Detective Comics #1000, it can be found on this very website.

If you don’t own a copy of the original book, then this beautiful deluxe version should go on your must buy list. Even if you do already have the softcover version, the new stories, lavish dust jacket, more durable presentation and the wealth of additional art and alternate covers make this edition worth picking up.

This book is a joy.