“The Riddler: Year of the Villain” 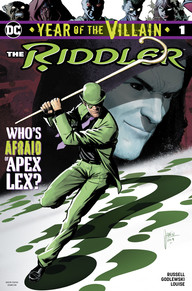 Lex Luthor has presented dark gifts to super-villains across the DC Universe, setting off what can only be called the Year of the Villain. Unfortunately, resources are limited, so not everyone got something. The Riddler was one such person, and in The Riddler: Year of the Villain, he’s most displeased about it.

Was this merely an oversight or a deliberate slight? Mr. Nigma is determined to find out which… and you should be too!

The Riddler has a meal with King Tut (so I can’t get Frank Gorshin and Victor Buono from the classic 1960s series out of my mind) and the Riddler basically poses the question “Why not me?” Luthor has been passing out powers beyond belief lately to heroes and villains alike, and The Riddler wants his!

Writer Mark Russell really gets that the joke’s on us, the audience, as King Tut only ever appeared in the classic television series. Here we are at the Riddler’s expense, wondering what kind of villain or farce he is. Russell’s exploration of the Riddler isn’t dark, but one of those Tom Cruise manifesto movies where the protagonist says “How did I get here… and why?” 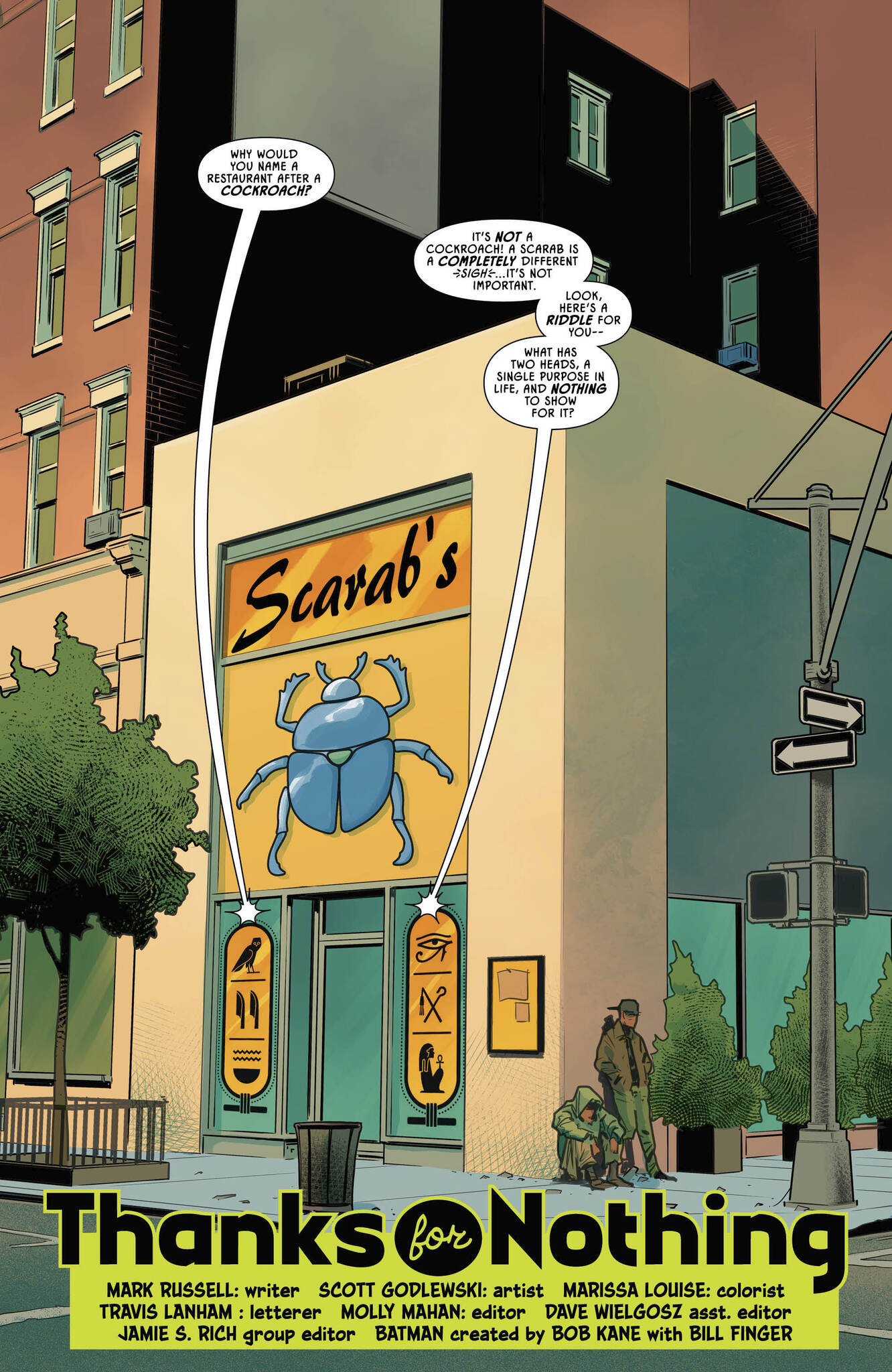 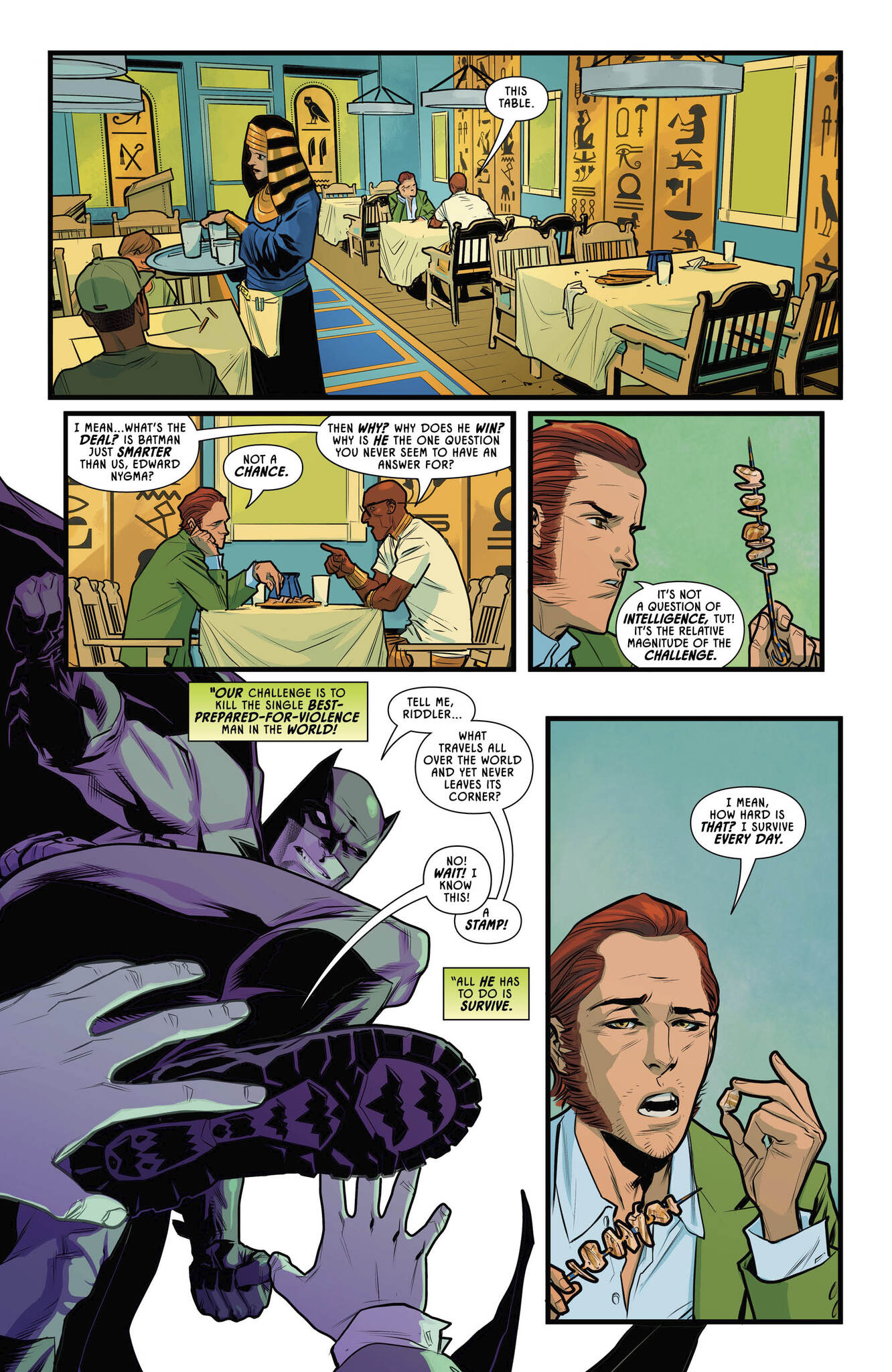 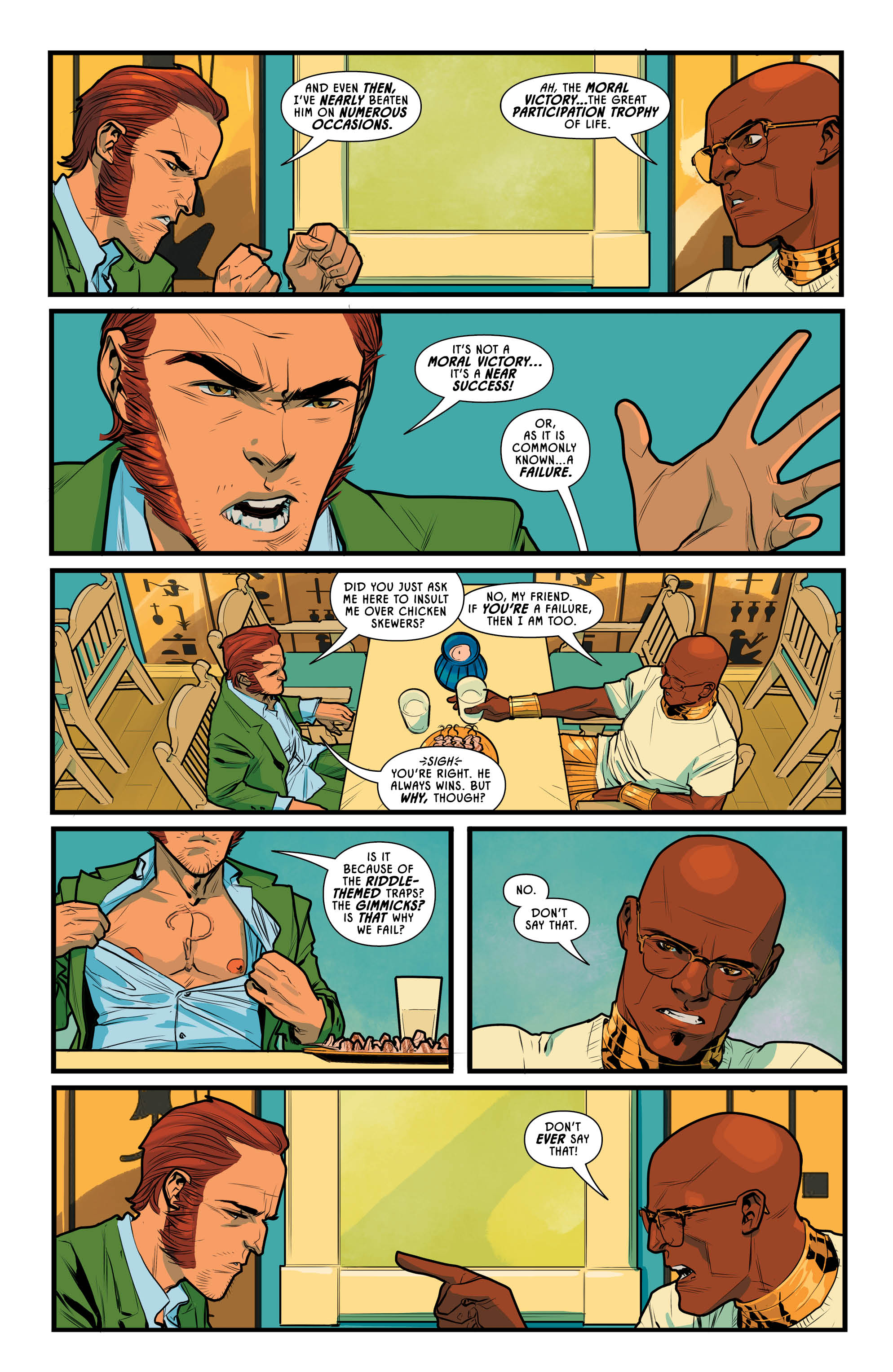 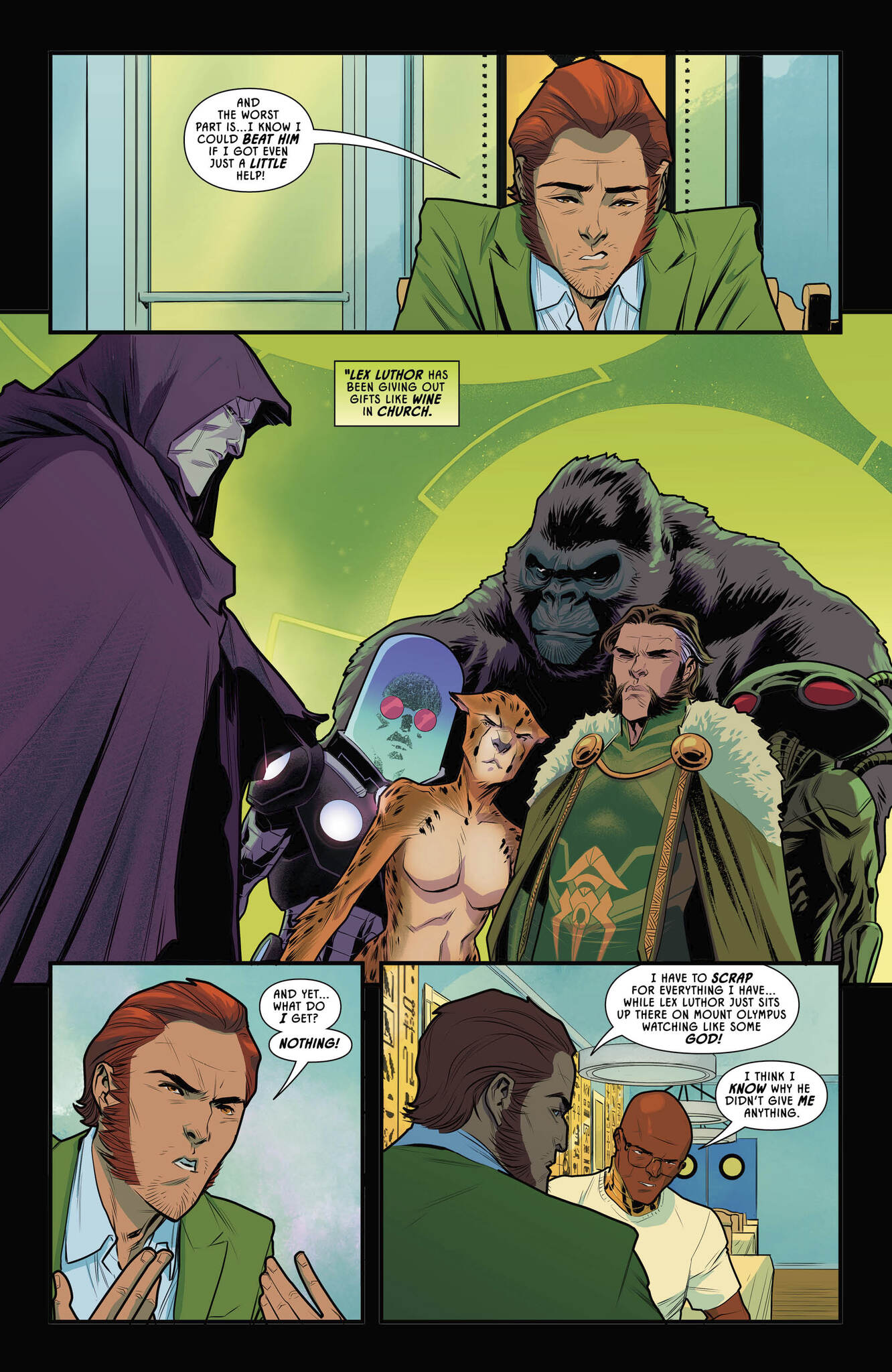 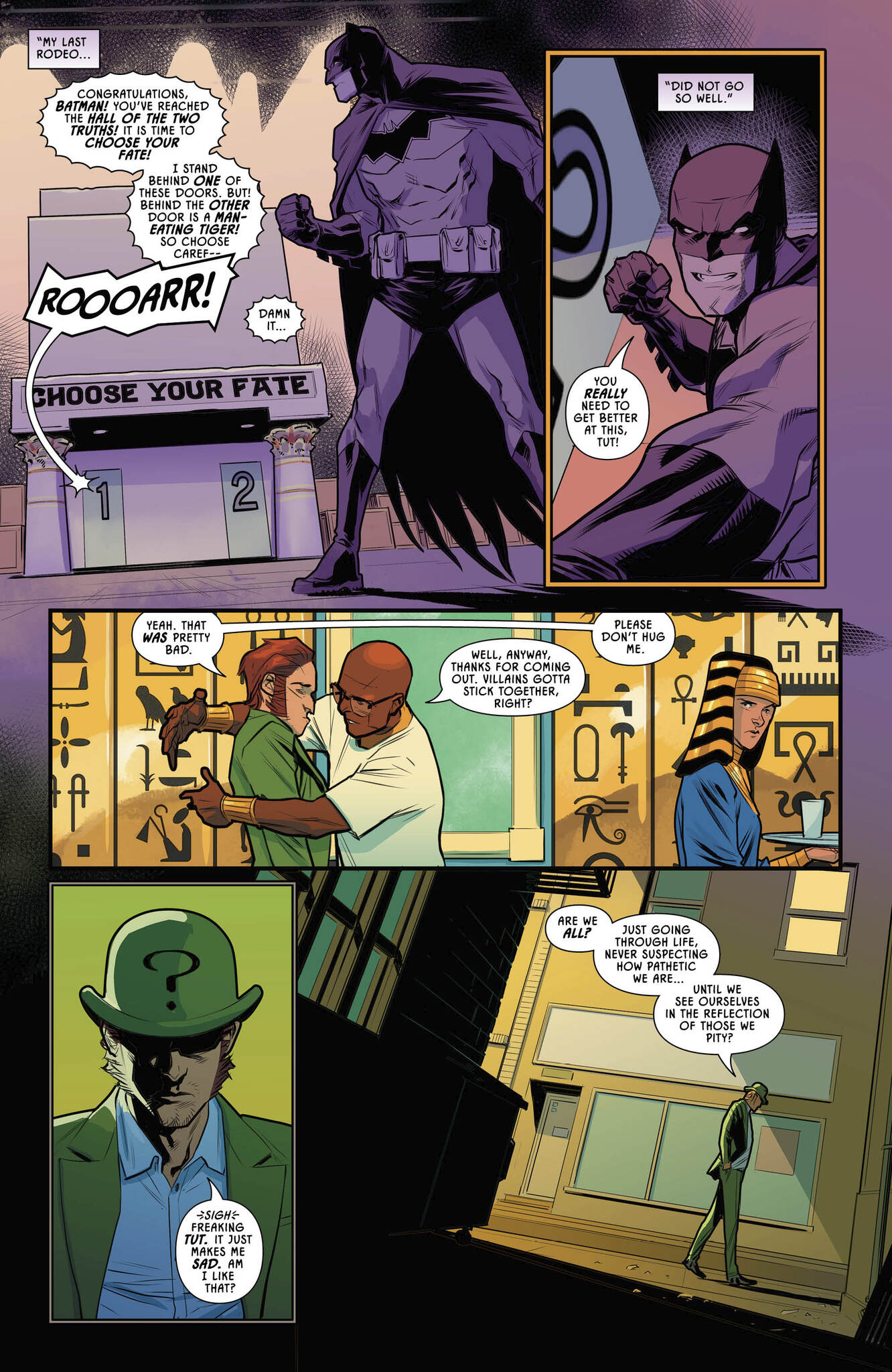 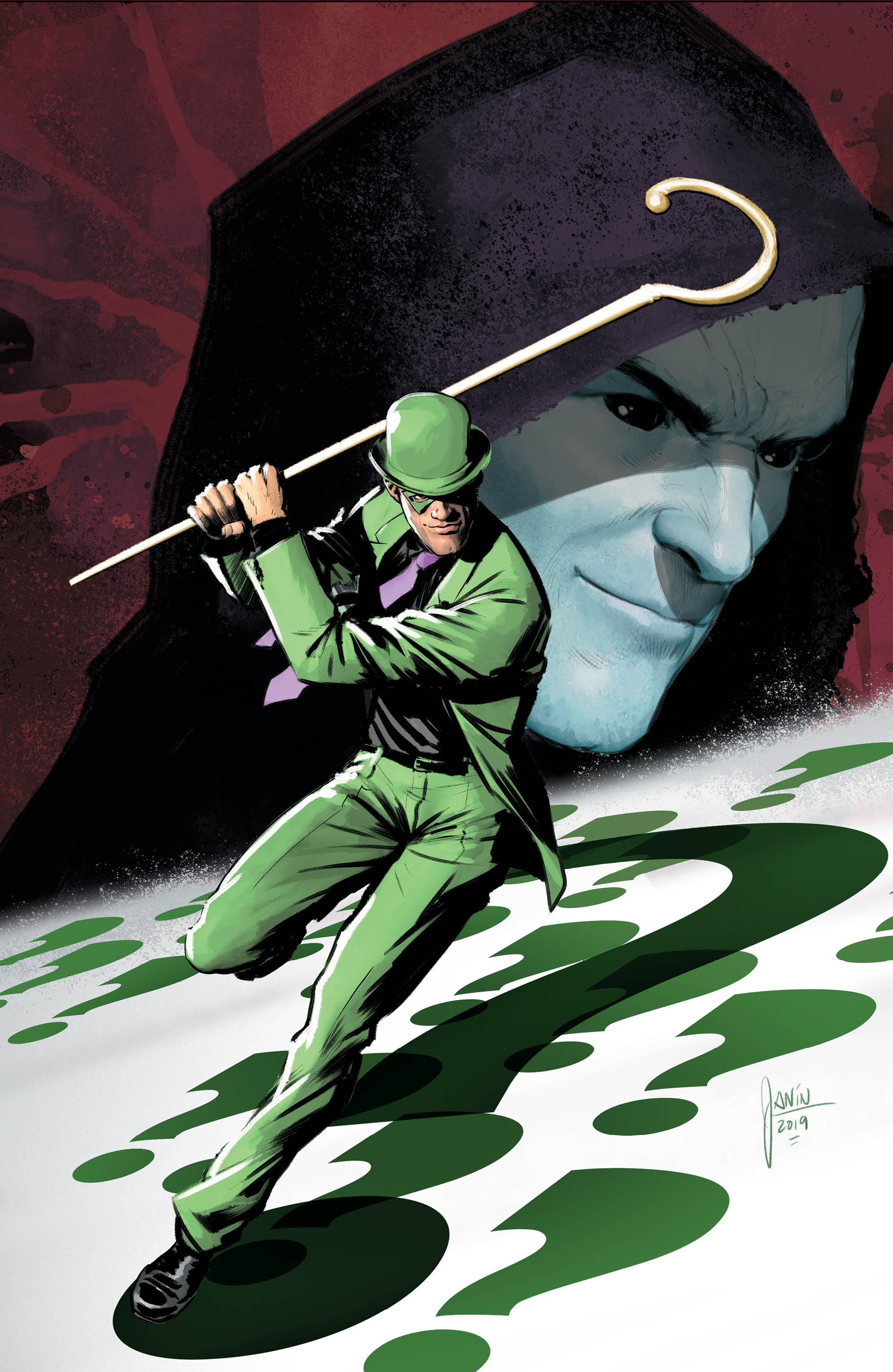 Cue the Garth Brooks theme of “Unanswered Prayers” as Lex himself appears to the Riddler and literally indicates that he would love to help, but he needs to know that Edward hasn’t locked himself in a box!

Both Russell and artist Scott Godlewski need to be commended for their humor, as well as for the tongue in cheek approach they’ve taken with King Tut. From the restaurant that Tut and Edward eat in, to the suburban house that Tut inhabits (it literally screams,”This is a lair… I’m a super-villain… come arrest me!” The notion that Tut spent his inheritance to make this ridiculous trap to catch Batman is comic genius, but it’s also a great way to prod the Riddler into asking, “Is this who I am?”

The villains The Wonder Twins encounter in their title are more threatening at this point than both Tut and Riddler, and that’s what Russell is leading us to.  Far be it of me to give away the ending, but this is an new chapter for Edward Nigma.

I wonder what fans will say…

Mark Russell provides even the most seasoned Batman fan with a story that really examines what it’s like to be a villain. Are they truly evil, or people that are a bit misguided, or have lost their way? At any rate, it’ll be interesting to see what the future holds for Edward Nigma.

Deathstroke To End With Issue #50