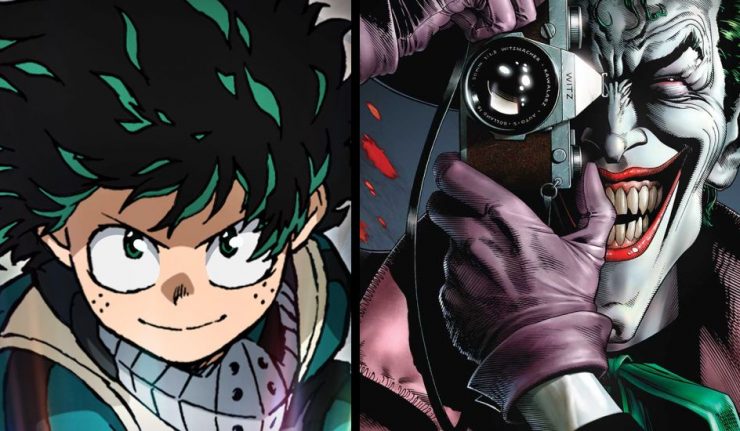 The world-renowned manga, My Hero Academia has given comic fans an easter egg. In a recent chapter, author and artist Kohei Horikoshi left a treat for keen comics fans. Horikoshi is no stranger to the beauty and marvel of American comics, as he has drawn and recreated panels from Batman: The Killing Joke. There is often a beautiful cultural exchange when there two art forms collide.

The manga is based on a school for students with superhero powers. Often, it spoofs and points out issues in superhero franchises. They fight against gender norms, common superhero tropes, and of course insane, remarkable villains. With the upcoming Joaquin Phoenix film, Joker, it’s even better to add more excitement by creating another version of the Clown Prince of Crime.

Love the attention to detail, as even the most subtle of touches or elements can be references to his immense adoration of American comic books!

This is the kinda stuff Horikoshi does that I absolutely adore. pic.twitter.com/pKmP7PtYrh

This must be a treat to fans of “The Killing Joke.” As Horikoshi mimics an exact panel, demonstrating his love and skill for comics art. There is speculation that fans of My Hero Academia may want to look up “The Killing Joke” for any possible hints to the upcoming story arc.

With convention season beginning soon, DKN will be bringing in several pop-culture references, starting by visiting Toronto Comic Con next week and Anime North 2019. Keep an eye open for exclusives and Batman-related news.