WB Contemplating Either Recasting Will Smith Or Replacing Deadshot

Earlier this week, it was reported that Will Smith will not be returning to the role of Deadshot for James Gunn’s upcoming The Suicide Squad, due to scheduling conflicts. It wasn’t specified what project that Smith is working on that would cause the conflict, but The Suicide Squad will be beginning production this fall. The decision was made on amicable terms between the superstar actor and the studio.

Smith, along with Margot Robbie, was the biggest star in Suicide Squad and was a great leading man for the film. Warner Bros. is currently contemplating whether they want to recast the role of Deadshot or find a different character altogether to fill his slot. 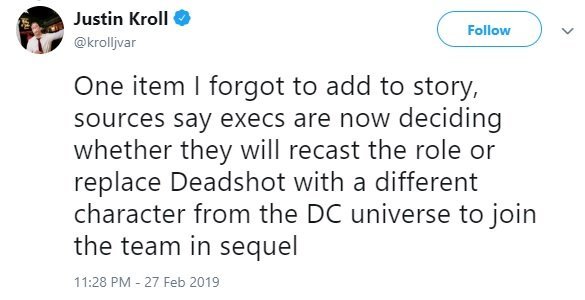 The nature of the project is still a little murky. It’s thought that The Suicide Squad will serve as a soft reboot for James Gunn to do what he wants with Task Force X, but that Margot Robbie will be returning as Harley Quinn and Viola Davis as Amanda Waller, which would indicate that it’s a sequel.

There’s also the whole nature of Batman. We already know that Ben Affleck is out as the Caped Crusader, but his Batman appeared in Suicide Squad and we still don’t know how Matt Reeves’ interpretation will fit in with the rest of the DC Films Universe, if at all.

Even though we don’t know much about the film, The Suicide Squad doesn’t hit theaters until August 6, 2021. Let’s all just sit back, be patient and enjoy the ride. WB is getting back to giving directors control of these films, so let’s give them the time they need to develop and make them. The product will ultimately be better in the end.

Are you sad to see Will Smith’s Deadshot leave Task Force X? Personally, I enjoyed him in the role and would’ve liked to see him back, but would prefer they replace the character instead of the actor.

If I could give a suggestion for a new character, we’ve been waiting for Joe Manganiello as Deathstroke for years now. Let’s finally let the Terminator loose.