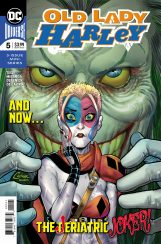 Here we are guys and gals, the final issue of the Old Lady Harley series. I’m here to tell you that this team has given us one heck of a rollercoaster ride! That could easily be said of this issue alone, with all the gifts it brings us.

We’ve had such a beautiful build up and to know that this is the issue is the big finale, makes me sad. This has been such a wonderful jaunt into a world that’s so unlike ANYTHING I have read in comics, and it’s refreshing.

When we last left Old Lady Harley, the debate was whether or not the Joker was truly dead. Ms. Quinn traveled to find Arthur Curry to see if he could give the team any insight, since he was the one there when the Joker was killed. Greeted by killer sea creatures, carrying quite the familiar smile in all the confusion, Harley was kidnapped by the goons that bore Joker likenesses. We ended the last issue, and begin this one, with Harley face to face with her former Puddin’. 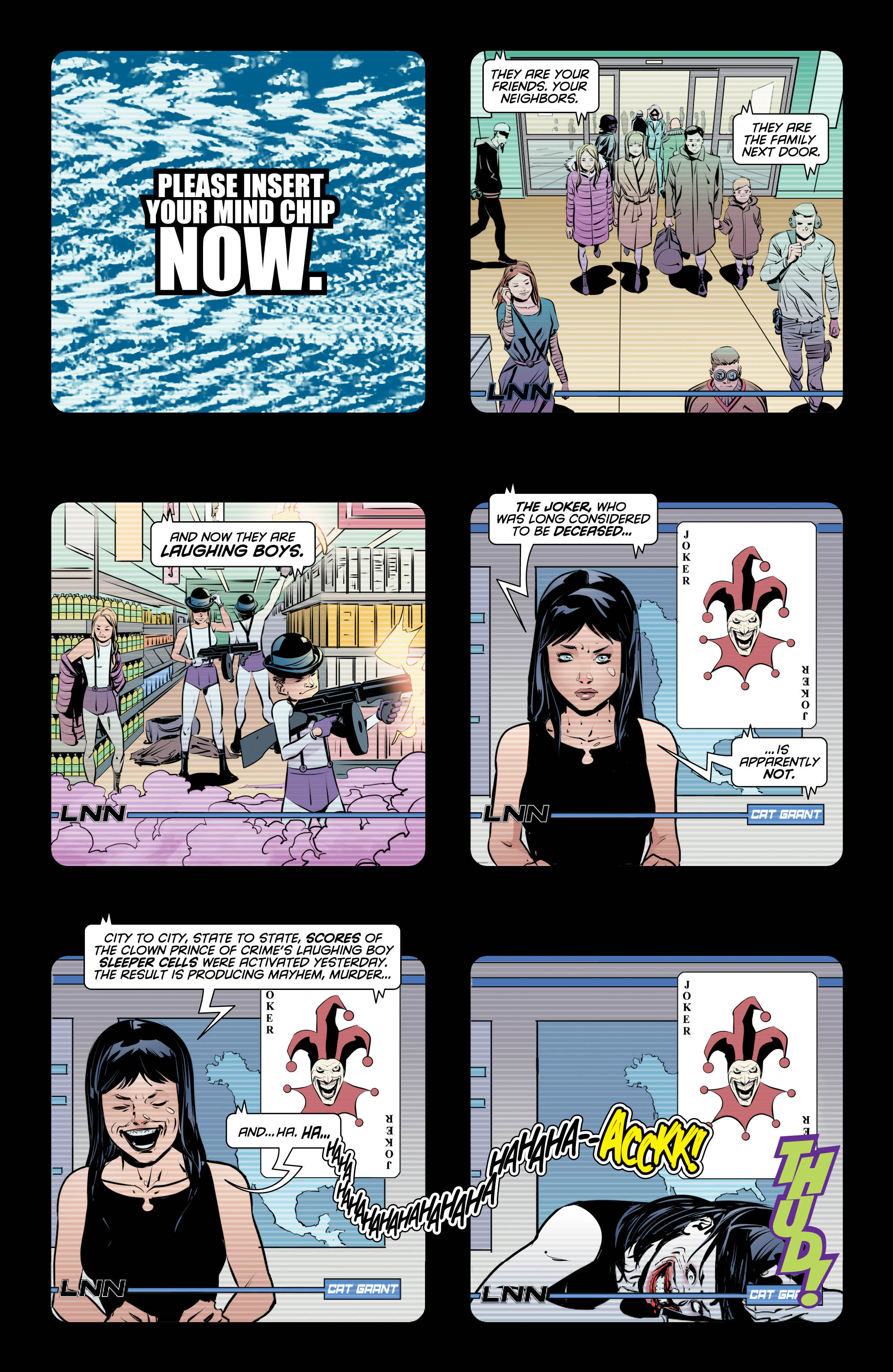 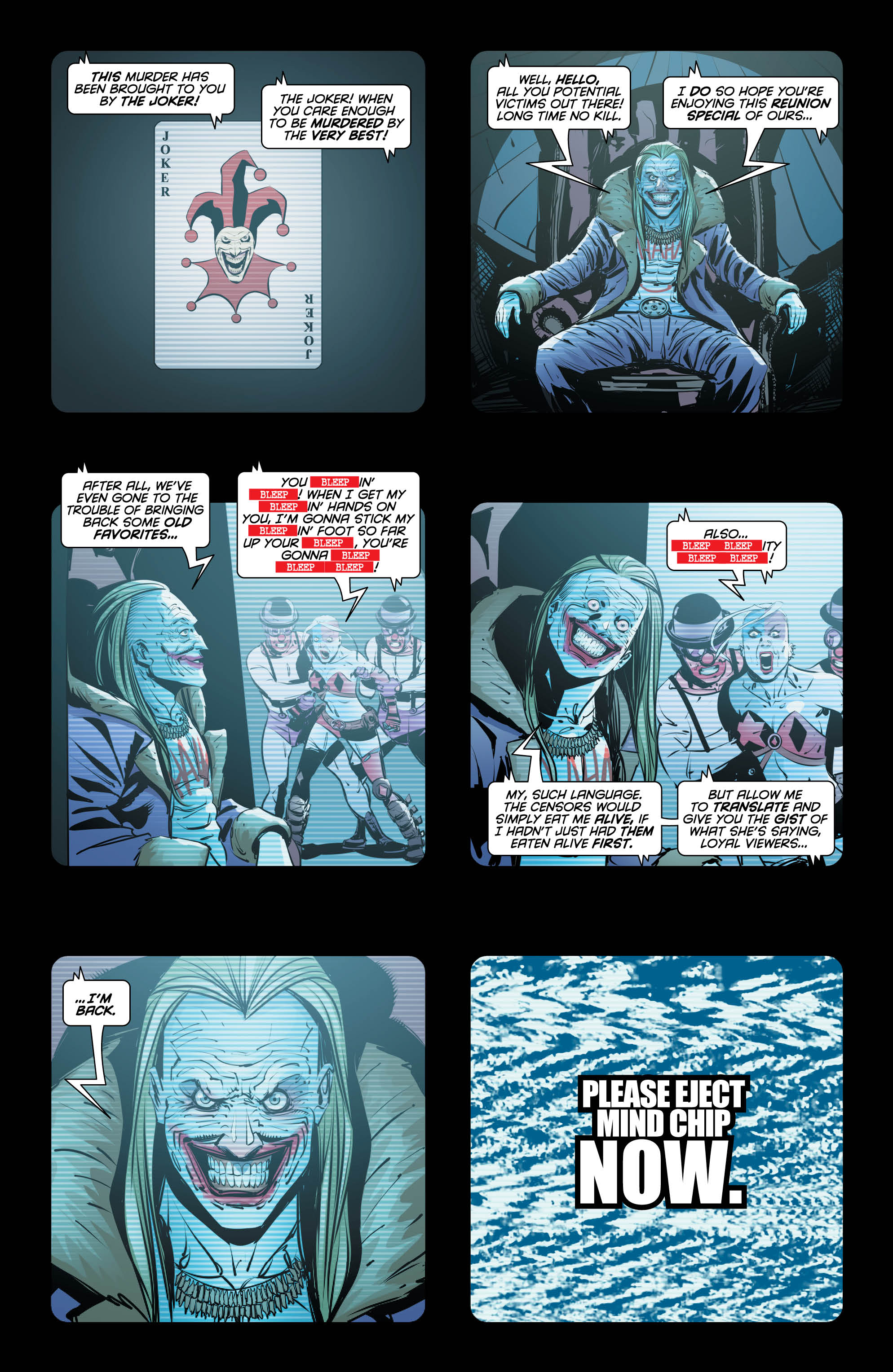 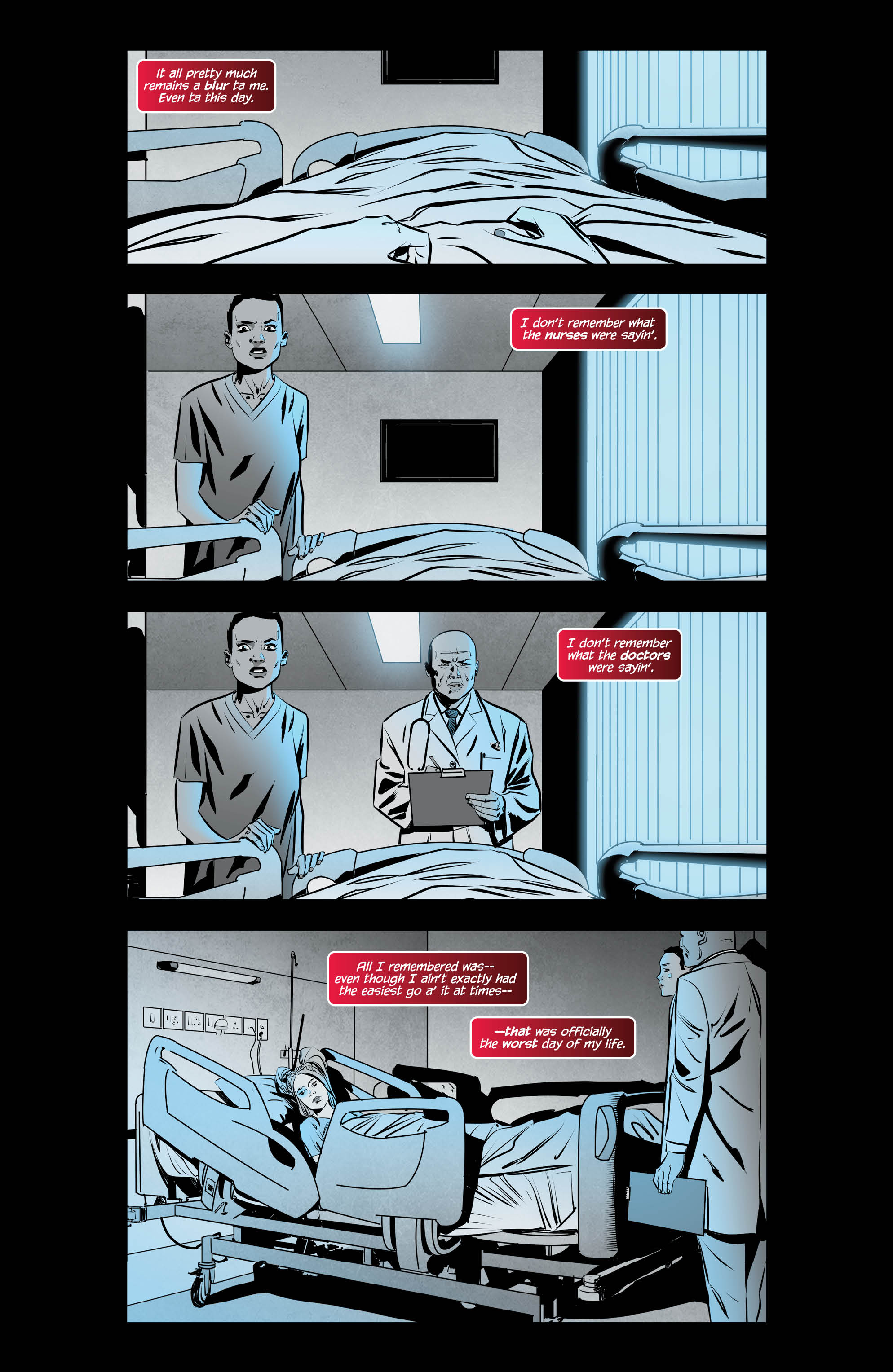 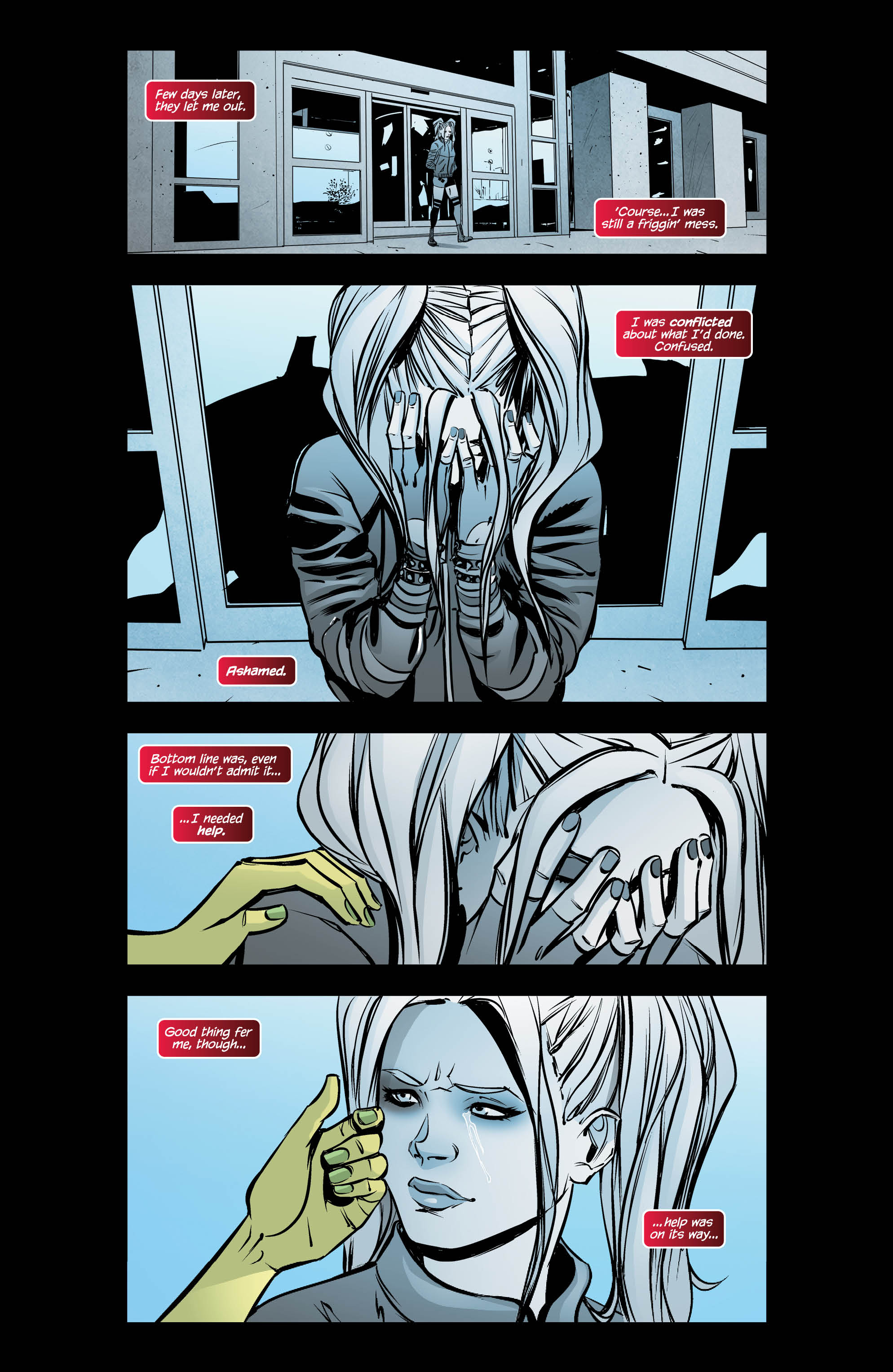 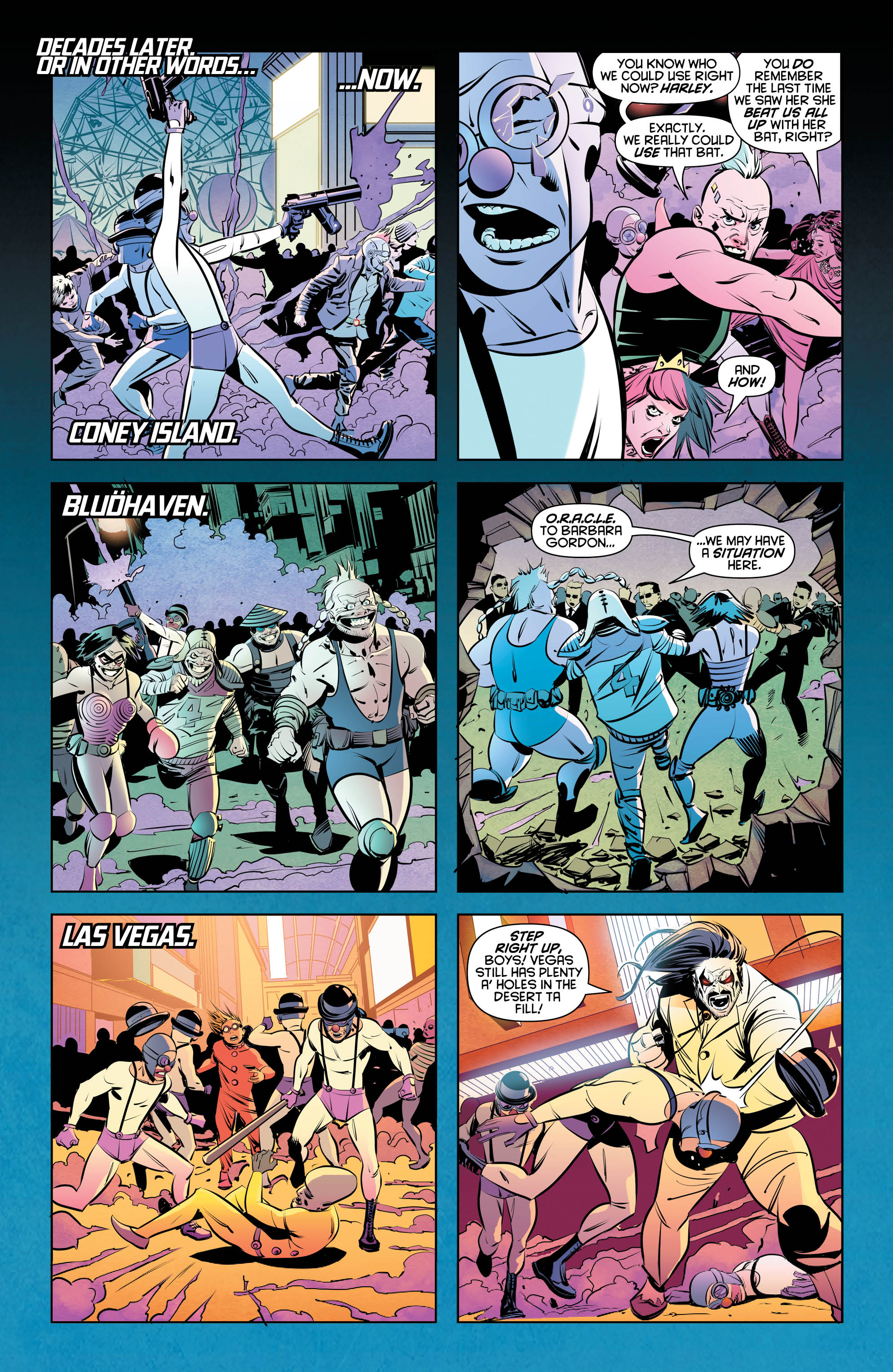 In this issue all of our chickens have come home to roost. Coney Island, Bludhaven, Las Vegas, and Gotham all have riots coursing through their streets. Chaos and panic have taken over and in the middle of it all stands our warrior, Old Lady Harley, still looking for answers. Answers to the questions of Joker’s Death, what happened to her, all those years ago, and what Batcavatron is, are answered in this issue.

The end of the line is in sight and Harley faces both her past and her present all at the same time… but not in the way you might expect. Even in this final issue there are curveballs aplenty being thrown. It’s not lacking in shocking moments as well, that even caused me to take a step back and ponder at just how much has thrown into the mix.

At the close of this issue and sadly the end of this series, it’s important for me to say how much of a thrill it has been watching this team do their thing. Their vibe has been inspired, to say the least, and we, the readers, got to enjoy every benefit of pop culture love and movie references along the way.

The writing of Frank Tieri has been a joy to read and the story he has crafted was a wicked adventure, contain huge laughs and moments of deep sorrow. Iñaki Miranda brought these emotions into being and made us able to see the story with a level craft that in some areas made me stop in my tracks.

Issue #4 with the Joker whale is STILL one of my favorite parts, aside from the Bane twins in Thunderdome.

Eva De La Cruz gave us such a spectrum of beautiful and fitting colors, that made the story, whether in the past or the present, that much better.

Dave Sharpe, while doing an amazing job with normal speech bubbles, made me giggle several times whenever Red Tool would speak. Genius. That is the word to describe this team.

This has been one of my favorite “Elseworld” stories since ThrillKiller, and that from me is high praise. I have loved reading every part of this crazy ride, that honestly suited Harley so well. The team made this a story that, while most questions have been answered, there are many more raised by the open ending. These will be running around my head until an animated series is made, and this team is given the chance to show us more about the lives of our favorite villains and superheroes in the future.

Overall I don’t think anyone could ask for more from this story except for it to continue – I mean that without any bias. Thank you guys for such an amazing arc and my fingers are crossed for more!

WB Contemplating Either Recasting Will Smith Or Replacing Deadshot