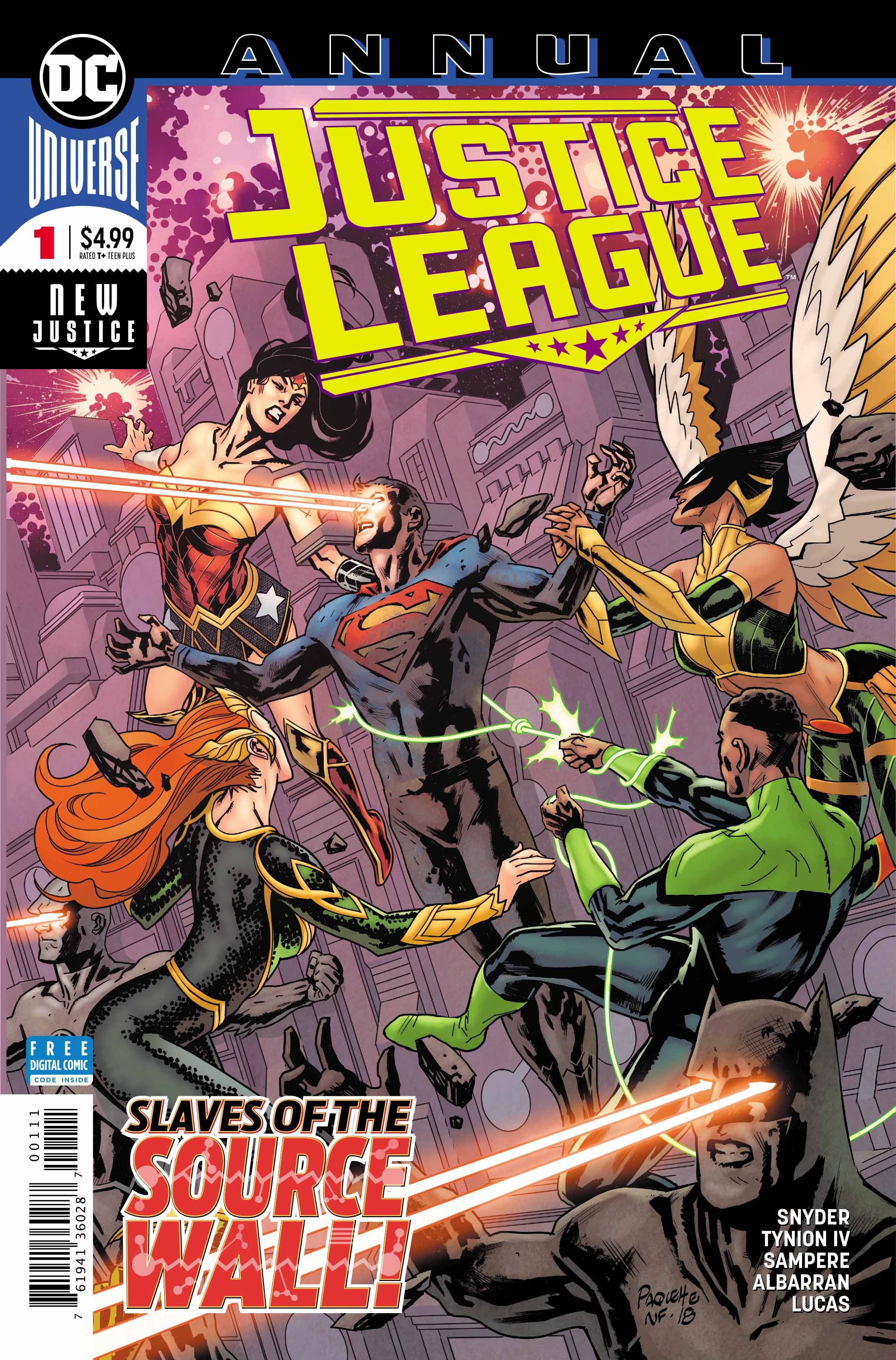 The !#@$% hits the fan in this week’s Justice League Annual #1, as the League has a face-to-face encounter with the mighty Perpetua.

As a result of the battle with Barbatos during Metal, a hole has appeared in the Source Wall, threatening the stability and safety of the Multiverse. The last issue of Justice League revealed that the Source Wall was partly constructed to contain the evil deity, Perpetua.

With the help of Starman, the League has formulated a plan to seal the hole by sacrificing Hawkgirl and the remaining Omega Titans, while the Legion of Doom wants to use this breach to summon Perpetua. Things don’t quite go as planned for the League, leaving the fate of the multiverse in question.

As predicted in the my last review, Snyder and Tynion’s story is massive. The stakes could not be higher, as the entire multiverse is experiencing eminent destruction. In the DCU such stakes are often accompanied by complex, high concepts. Such concepts often overshadow, and thereby diminish, the story, as plot beats are often lost amidst the mind-bending ideas. When Snyder was the sole writer on the title, critics and fans levelled similar critiques at the first arc of this run.

However, for the past few issues, Snyder has only been credited for the story. Whereas, Tynion has been credited for the actual script. This dynamic has truly made a difference in the overall quality of the writing. While his concepts are often brilliant, Snyder’s prose can at times be laborious in its detail. Tynion brings a certain streamlining talent to the title which is desperately needed in a story as large as this one. 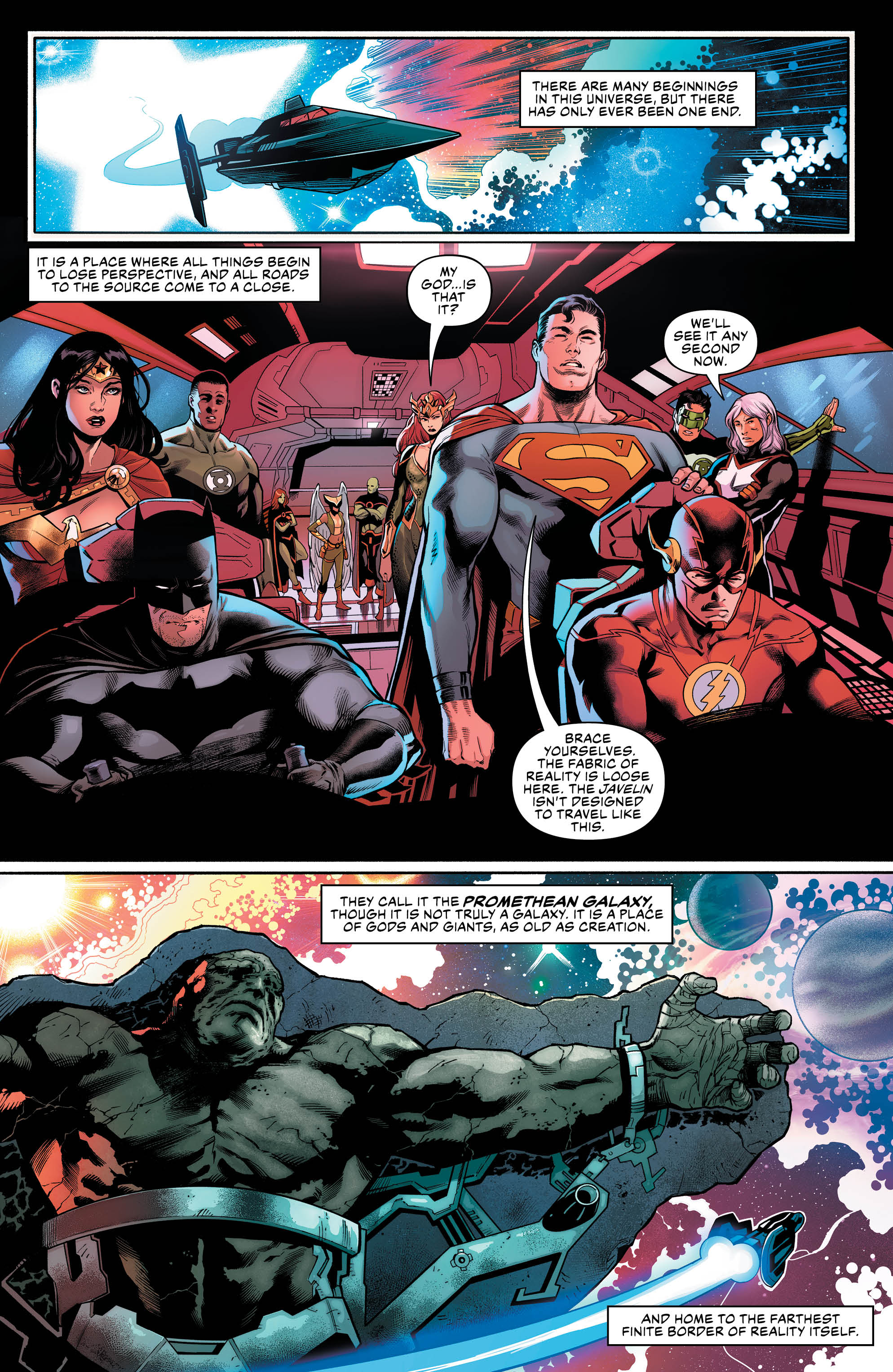 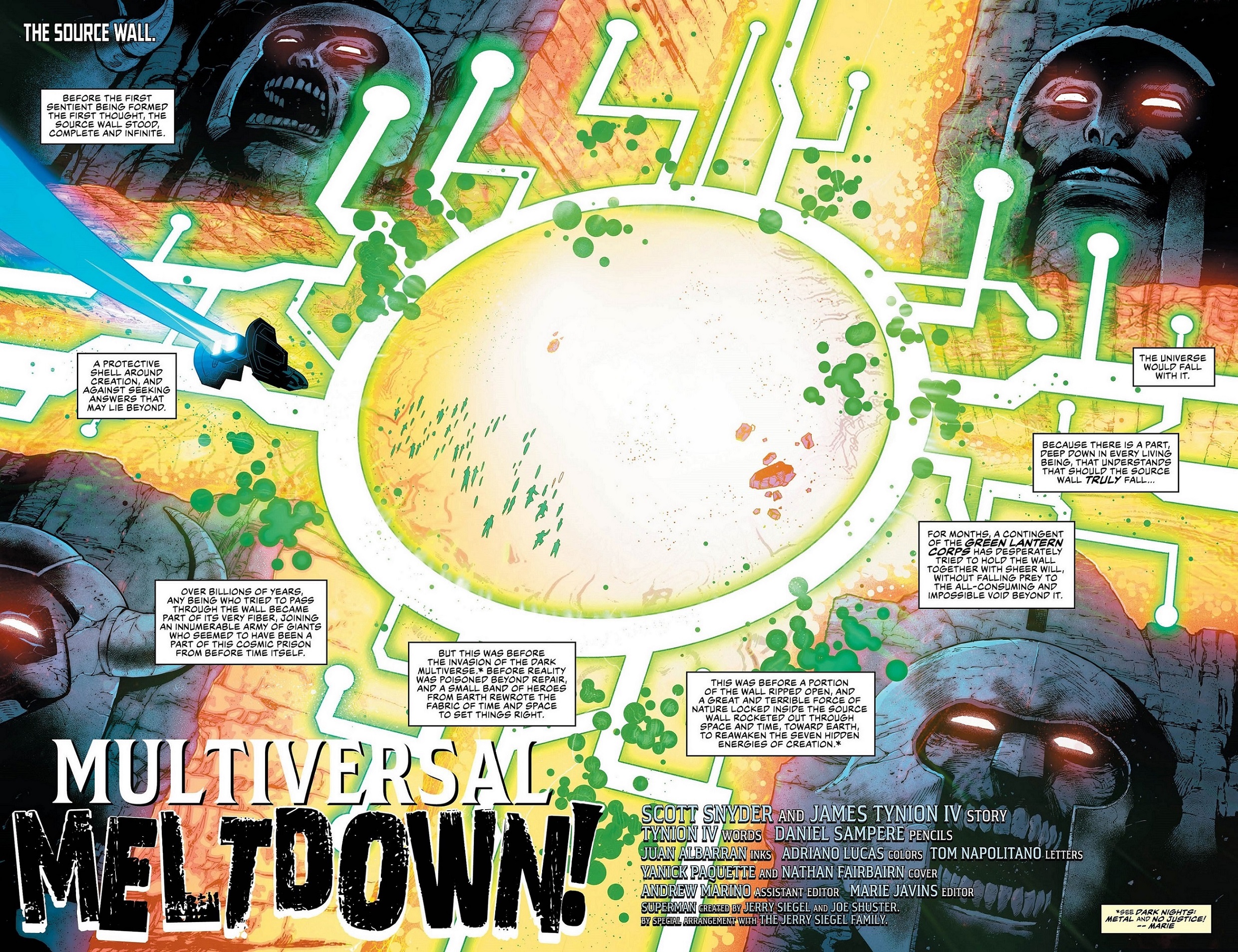 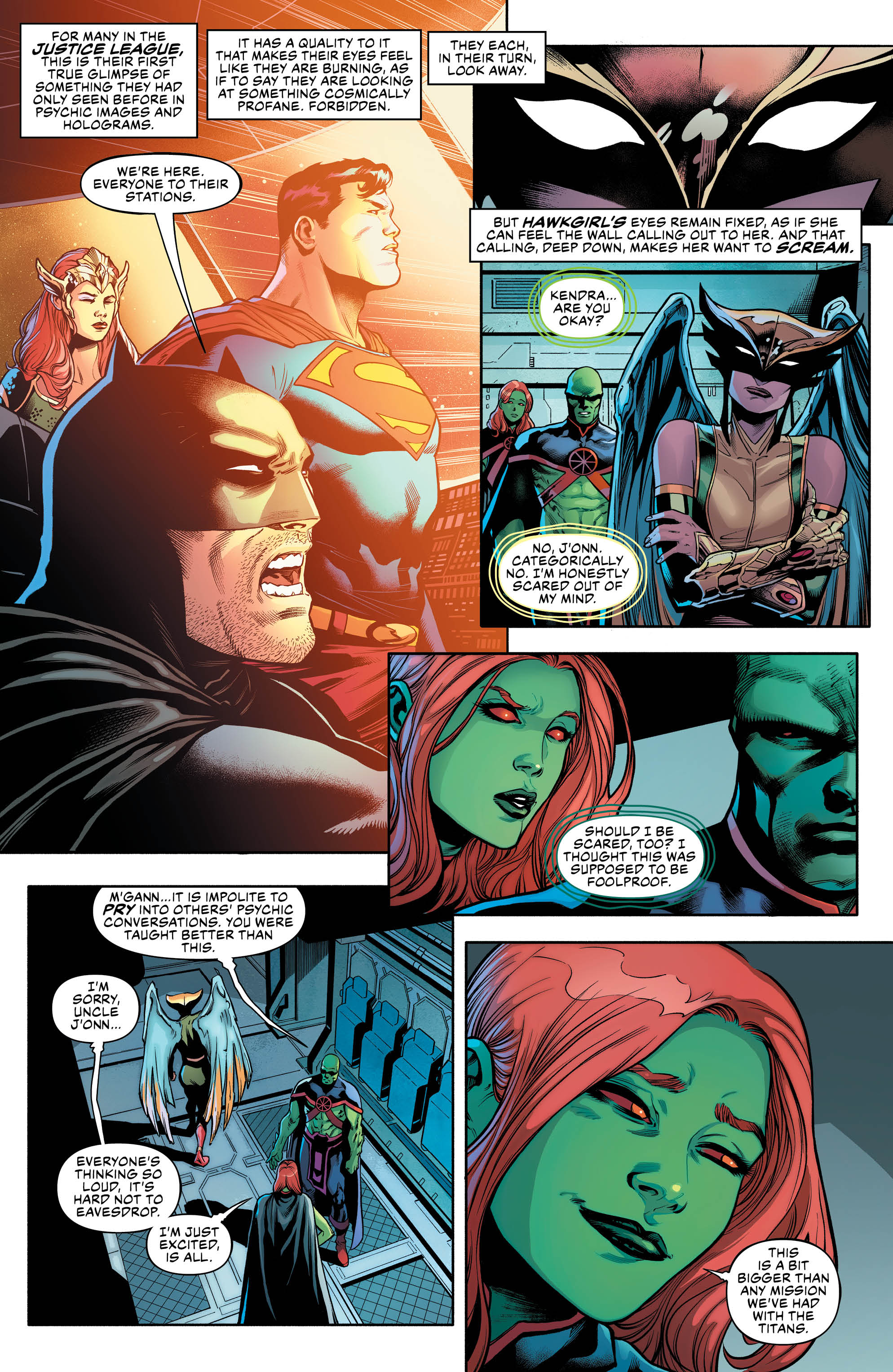 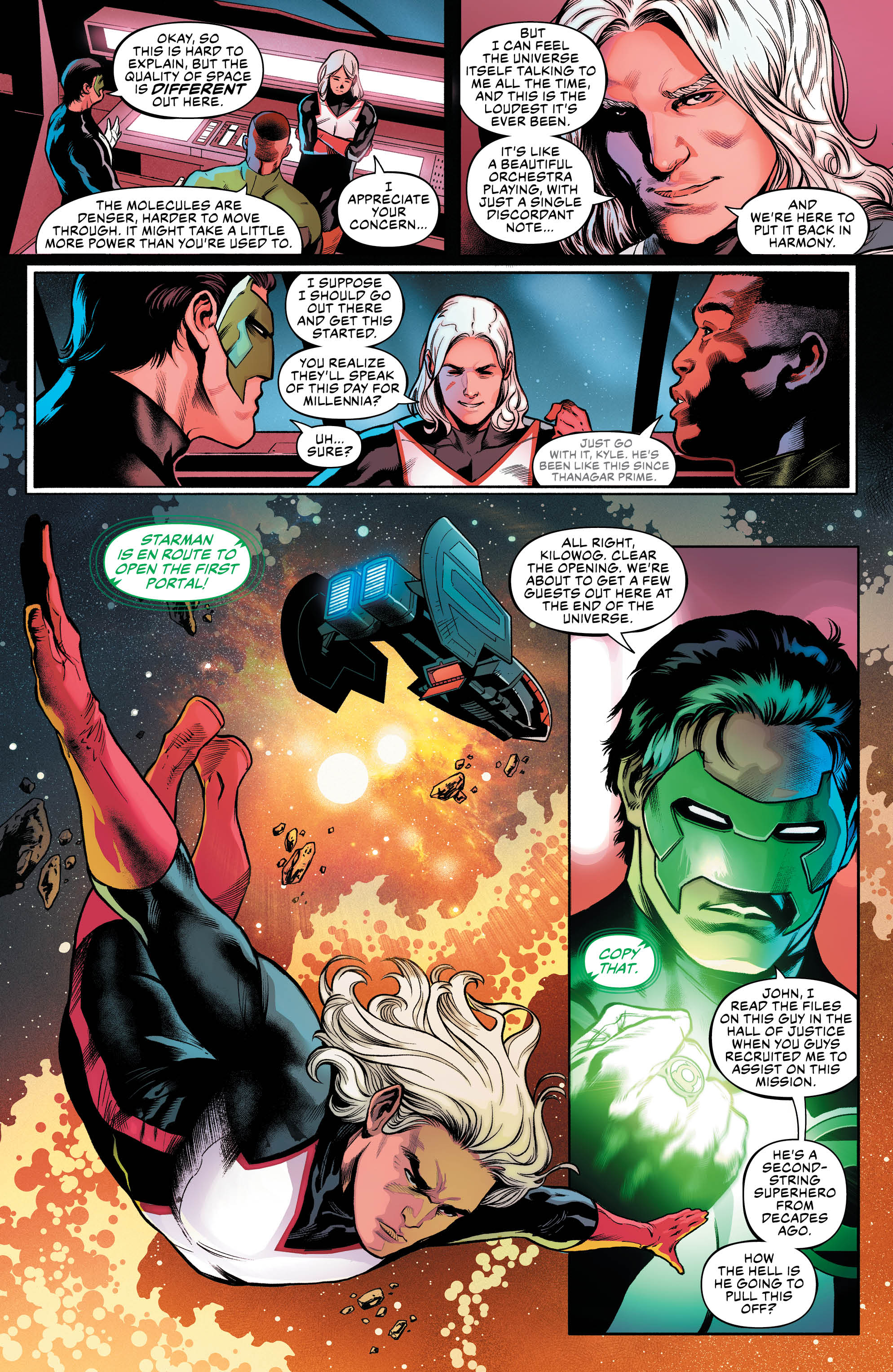 Will the Real Bryan Hitch Please Stand Up

Daniel Sampere’s pencils are beautiful. They are rich in detail, dynamic in action, and massive in scope. His work is incredibly reminiscent of the fan-favorite, Bryan Hitch – widescreen action sequences abound in this issue. Although Sampere has worked for DC since roughly 2011, he’s kept a relatively low profile. This issue is A-list work and will undoubtedly boost his reputation.

Justice League Annual #1 is an ambitious issue, delivering a story as large and as complicated as any one of DC’s myriad of Crises. Snyder and Tynion’s story is engaging, creating a real sense of peril for the League. Sampere’s work is grand, which only reinforces the scope and size of this story. This is a great issue in a great run. In short, it’s worth both your money and your time.