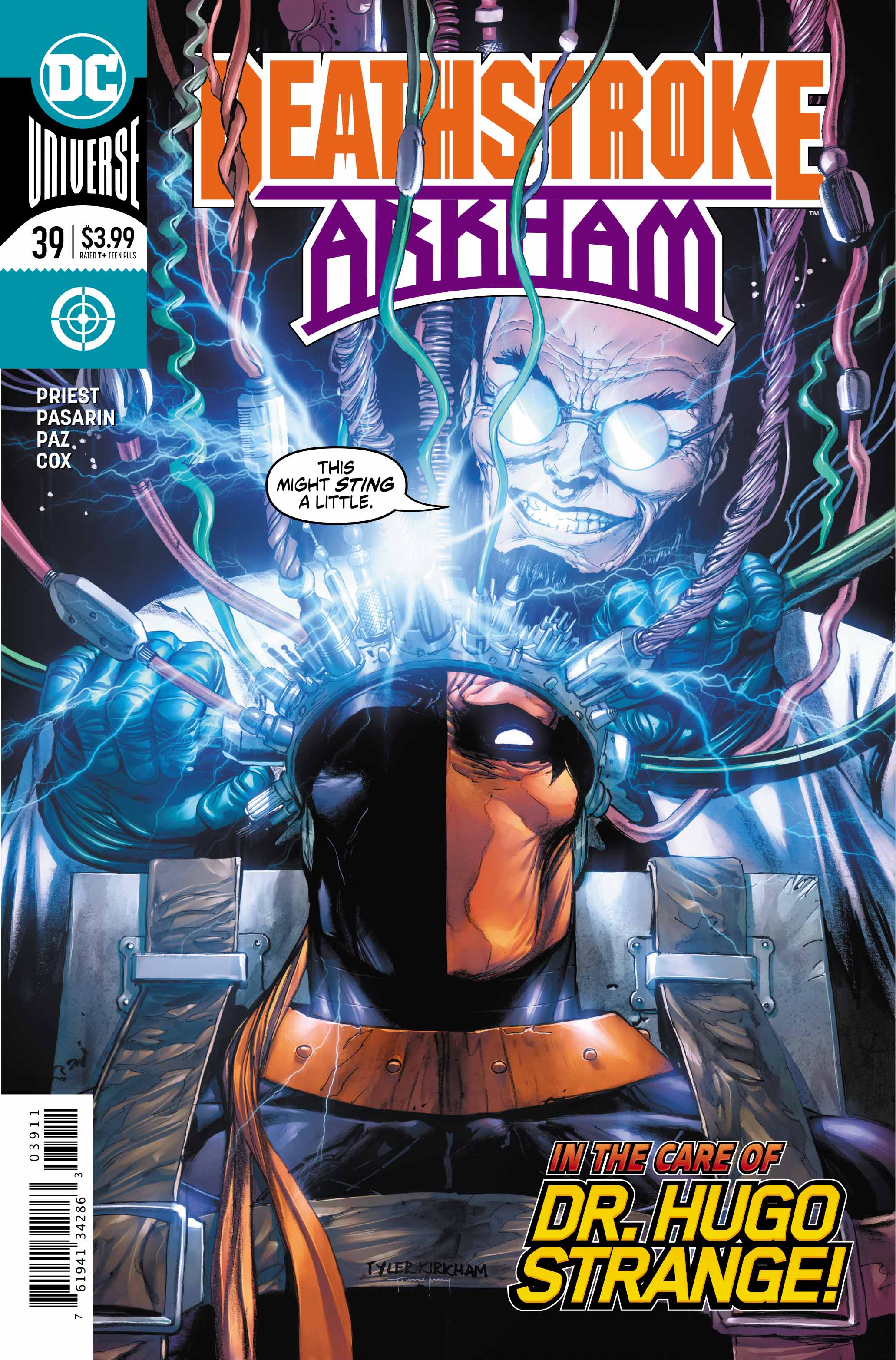 Things take a turn toward the absurd in this week’s surreal Deathstroke #39, as Slade’s time in Arkham Asylum comes to a close.

Driven to the brink of madness, Deathstroke continues to face the grim (un)reality of life in a loony bin. Last issue revealed that Slade is not in fact crazy. Nevertheless, Deathstroke’s mental and physical faculties are under assault from the mad scientist, Hugo Strange. Lucky for Slade, his son, Jericho, has a plan to spring his father.

The issue opens with Devon (aka Death Masque) recounting to Hosun his and Slade’s encounter with the Pulorians – an alien race hellbent on invading Earth. Hosun, who seems highly skeptical of Devon’s story, listens with bemusement. Hilarity ensues as both end up in the back of a cop car, thanks to Devon’s ninja costume.

Deathstroke #39 also chronicles the adventures of Ravager and Two-Face, as they navigate rural Vietnam in search of an answer to her dual-personality problem.

What makes Deathstroke #39 particularly interesting is the character, Devon. Essentially, Devon is a nod to Marvel’s Deadpool. The similarities are striking; both characters lack mental stability, break the fourth wall, and have a ninja-esque character design. Undoubtedly, Priest is making a reference to the fact that Deathstroke was the prototype for Rob Liefeld’s creation.

Death Masque brings a comedic touch to the script which, as the vast majority of Priest’s run has been quite dour in its tonal disposition. Devon and the zany alien invasion storyline make for a wonderfully bizarre read. 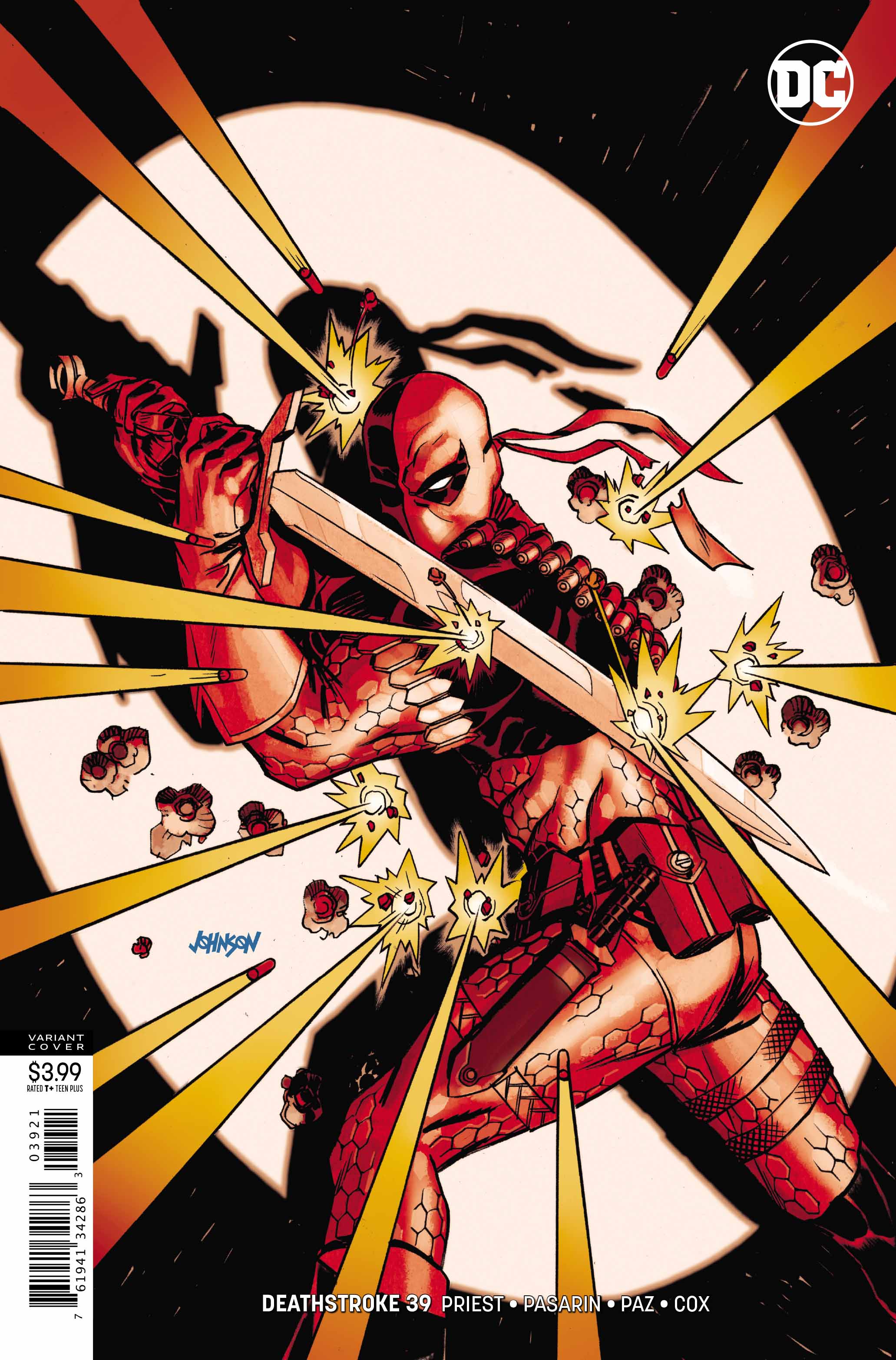 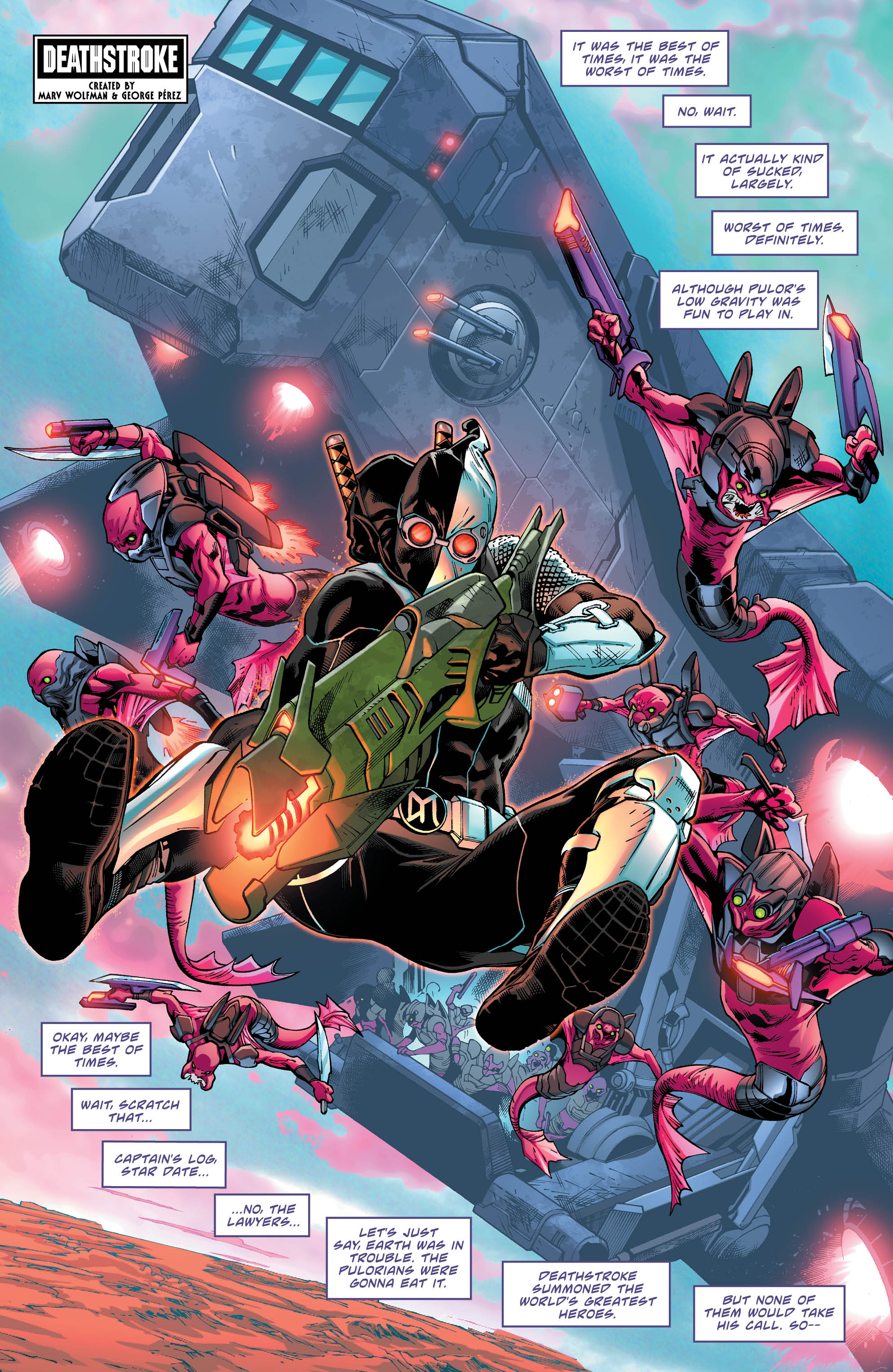 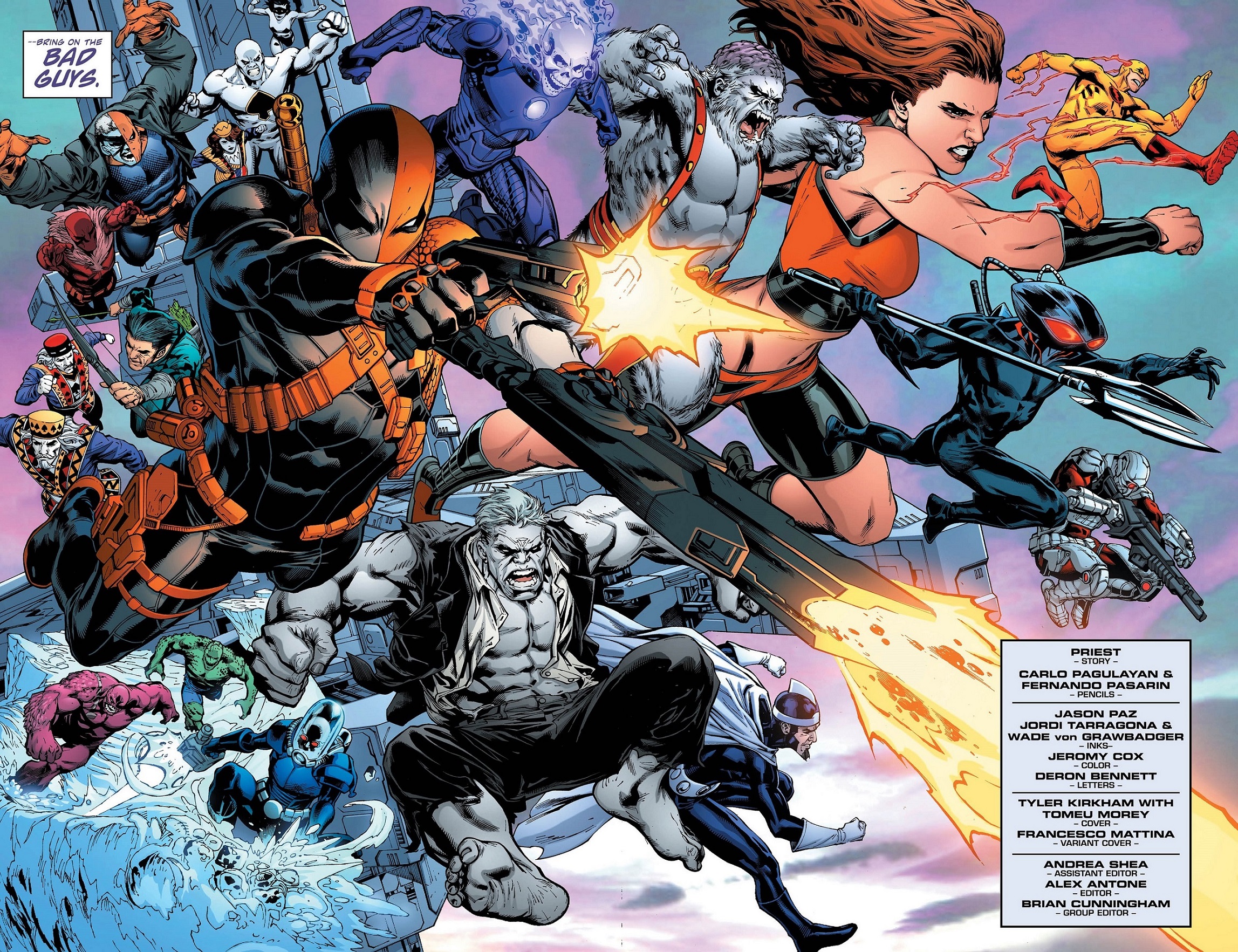 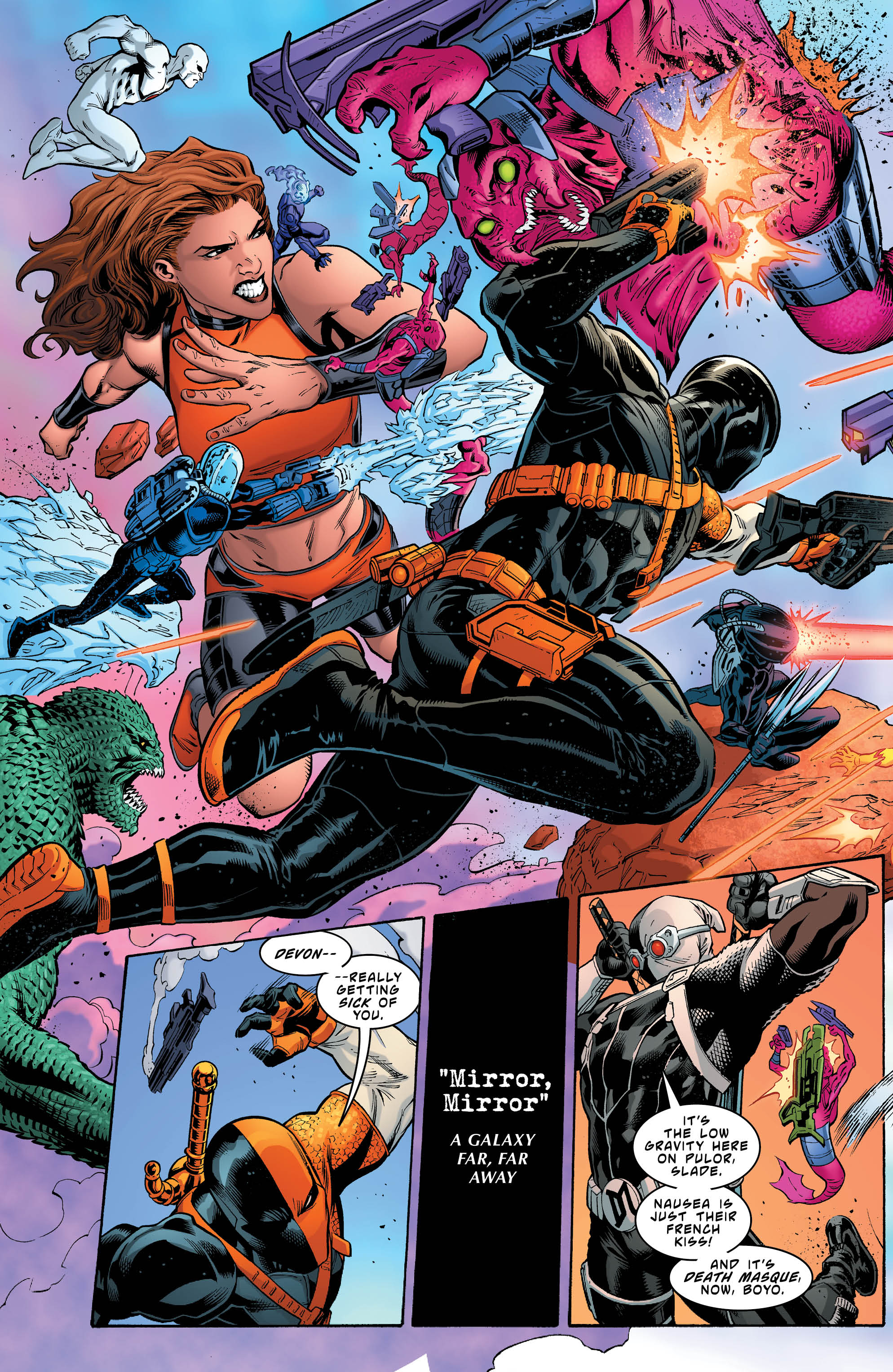 Return Of The Pagulayan

Carlo Pagulayan once again joins Fernando Pasarin on pencilling duties. Pagulayan hasn’t worked on this title since the end of the “Deathstroke Verses Batman” storyline. To be honest, it’s hard to distinguish the difference between Pagulayan and Pasarin’s work. While Pasarin’s art may be a bit more grungy in tone, both artists come from the Jim Lee school of glorified realism – a school that has dominated DC for the last decade or so. Overall, the issue looks great, as this style suits the title as well as this specific chapter.

Deathstroke #39 is fun in a different way from previous issues: it maintains the sensibility of a thinking man’s comic while leaning into the absurdity of the “Arkham” plotline. From alien invasions, to questions about reality, to dual identities; the “Arkham” story arc has been a wild, mind-bending trip, excellently executed by its artistic team. Deathstroke is a title that consistently delivers thought-provoking stories with Class A art. This one’s worth a read.

Penguin May Be the Villain In Matt Reeves’ ‘The Batman’