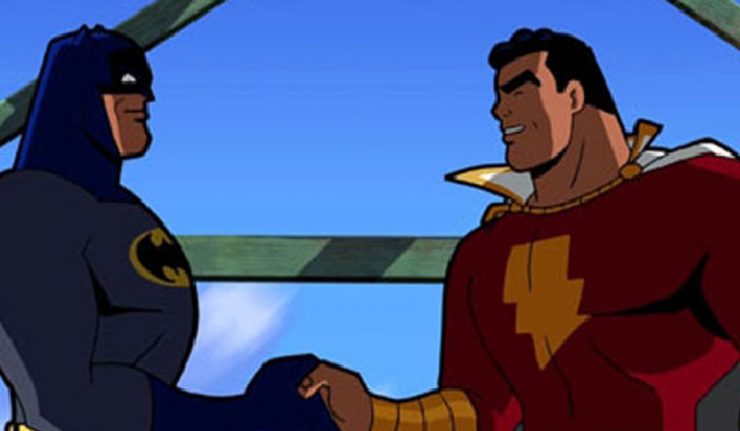 With Aquaman blowing expectations out of the water, things are really looking up for the DCEU.

Shazam! is the next new jump into the ever expanding world of the DCEU. With a new trailer potentially dropping mid-January, Billy Batson and his alter ego are set to bring a bit of light-heartedness to the big screen.

How will you know that it’s a part of the dark, gritty DCEU? I hear you ask.

A Nod To The World’s Finest

Here’s a sneak peek preview at what the new trailer is rumoured to be about. Courtesy of SuperBroMovies;

The trailer kicks off with Billy eating dinner with his foster family, where Cooper Andrews’ Victor Vazquez reveals a costumed hero has appeared in Philidelphia. We then cut to a montage of clips from the first trailer before the WB, New Line, and DC logos grace the screen.

From there we go back to dinner and are introduced to Darla Dudley and Pedro Peña, the latter of which makes fun of Shazam’s costume. Next, we revisit the Wizard’s lair, where we see Billy, once again, acquire his powers.

Freddy and Billy then begin brainstorming hero names, without much success. Cut to Billy attempting to fly from above the clouds. As he begins to fall at an accelerated rate, our titular hero begins to channel Superman and catches himself right before crashing back to earth. Shazam then realizes that he can indeed fly.

To follow up that incredible clip, Mark Strong’s Dr. Sivana finally makes his debut in the trailer. He and Shazam begin to fight mid-air, as we cut to a child playing with Superman and Batman action figures. The two heavyweights collide as the toys do the same, and might I add, the kid was humming the 1978 Superman theme, which was a highlight of the trailer.

Another montage of scenes from the first trailer ensues before we cut to Freddy and Shazam at a real estate office, where they are attempting to find a “lair.” They are asking if there are any castles available, preferably overlooking some water. To conclude the trailer, we get a look at the Marvel Family (depowered) confronting Billy about him being Shazam intercut with some action clips.

Right before the logo hits, we see Sivana ask Shazam how old he is, to which Billy replies ‘basically 15.’ We then see a new shot of Billy transforming into the titular hero while jumping off a building.

Finally, what you’ve all been waiting for, the stinger. It starts off with Sivana tackling Shazam into a toy store. Billy then proceeds to throw a large Batman toy at the villain, which misses to great comedic effect. Shazam then ends up on a large scale piano as the two fight, which is obviously an homage to Big, which this movie took inspiration from.

Now I know that can be a little daunting to imagine, a lot is happening in this short two minute trailer. I can just picture a young Billy Batson throwing a Batman toy at the villain, as well as Shazam trying to fly like Superman.

So far the first spot, and description of the rumoured second trailer are doing a lot to sell this production. Will you be rushing off to see this high flying superhero land on the big screen?

Let us know in the comments.