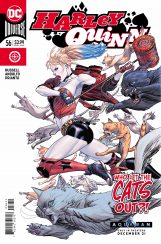 Welcome back to the Harleyverse readers. This issue not only do we have a guest writer but also a guest artist on board. We join Harley Quinn in a story about the joys of finding homes for animals, but are also presented with the idea of old and how they affect us in a satirical way. Let’s settle in.

Pepto Dogs Are A No Go

We join back up with Harley as she is dealing with an allergic reaction to a tenants cat army in her building. We are introduced to a cat burglar by the name of Ferrell Katz. He is a trainer of criminal cats who have become his family. Sadly the amount of cats are driving Harl’s allergies haywire and she sets out to help find good homes for the precious kitties. Unfortunately as Harley sets out she soon discovers this won’t be all catnip and kitty treats. 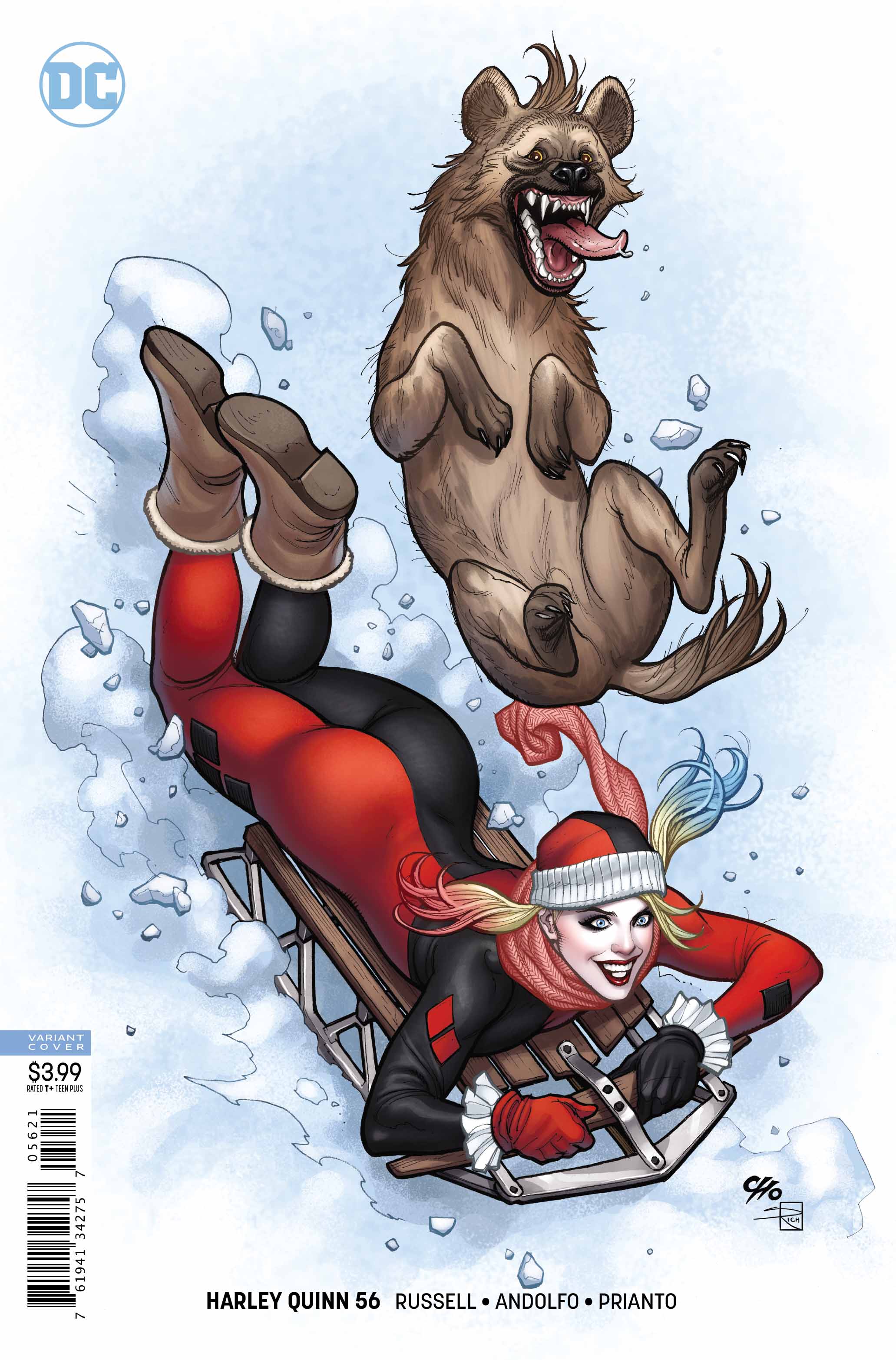 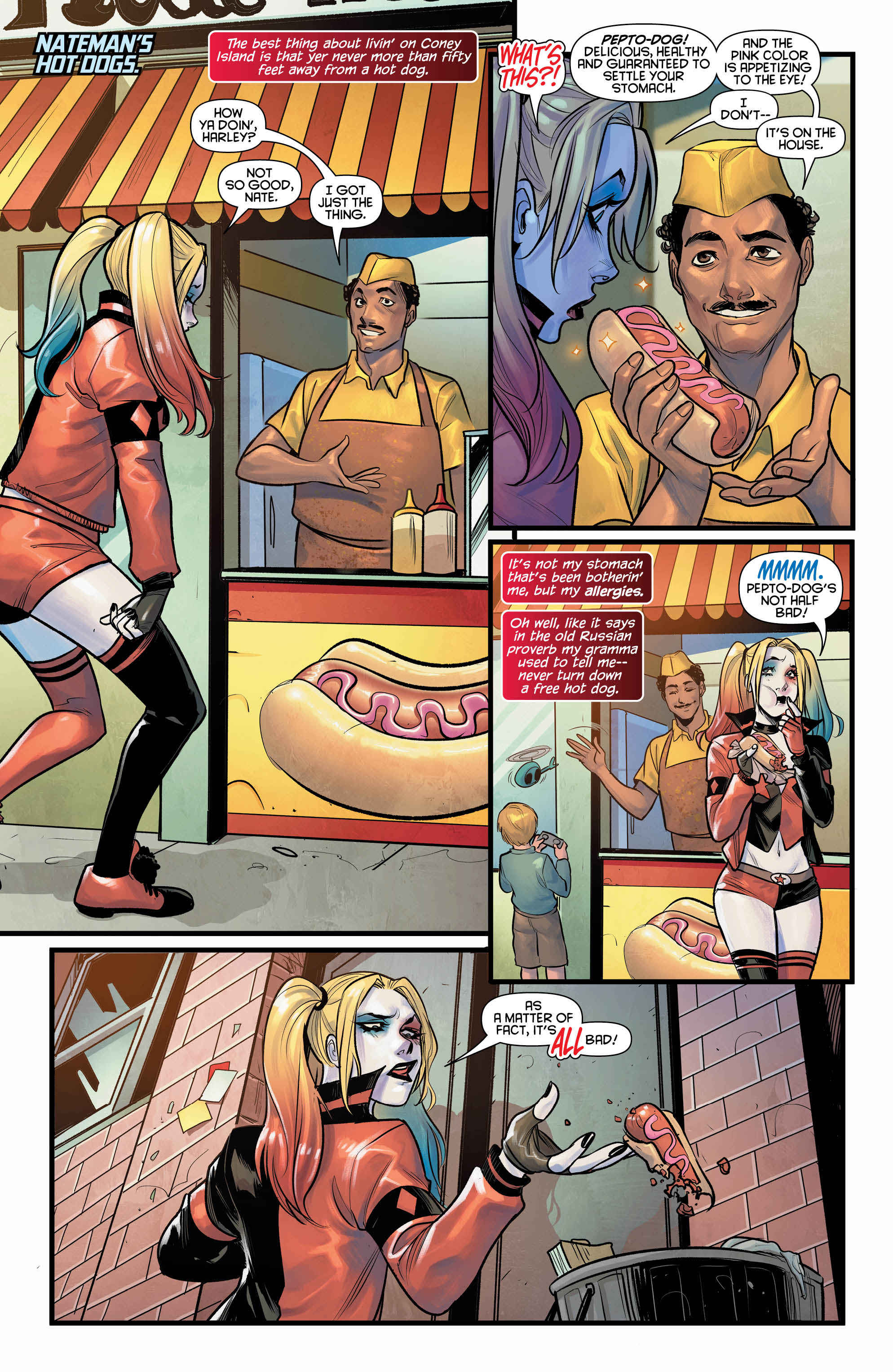 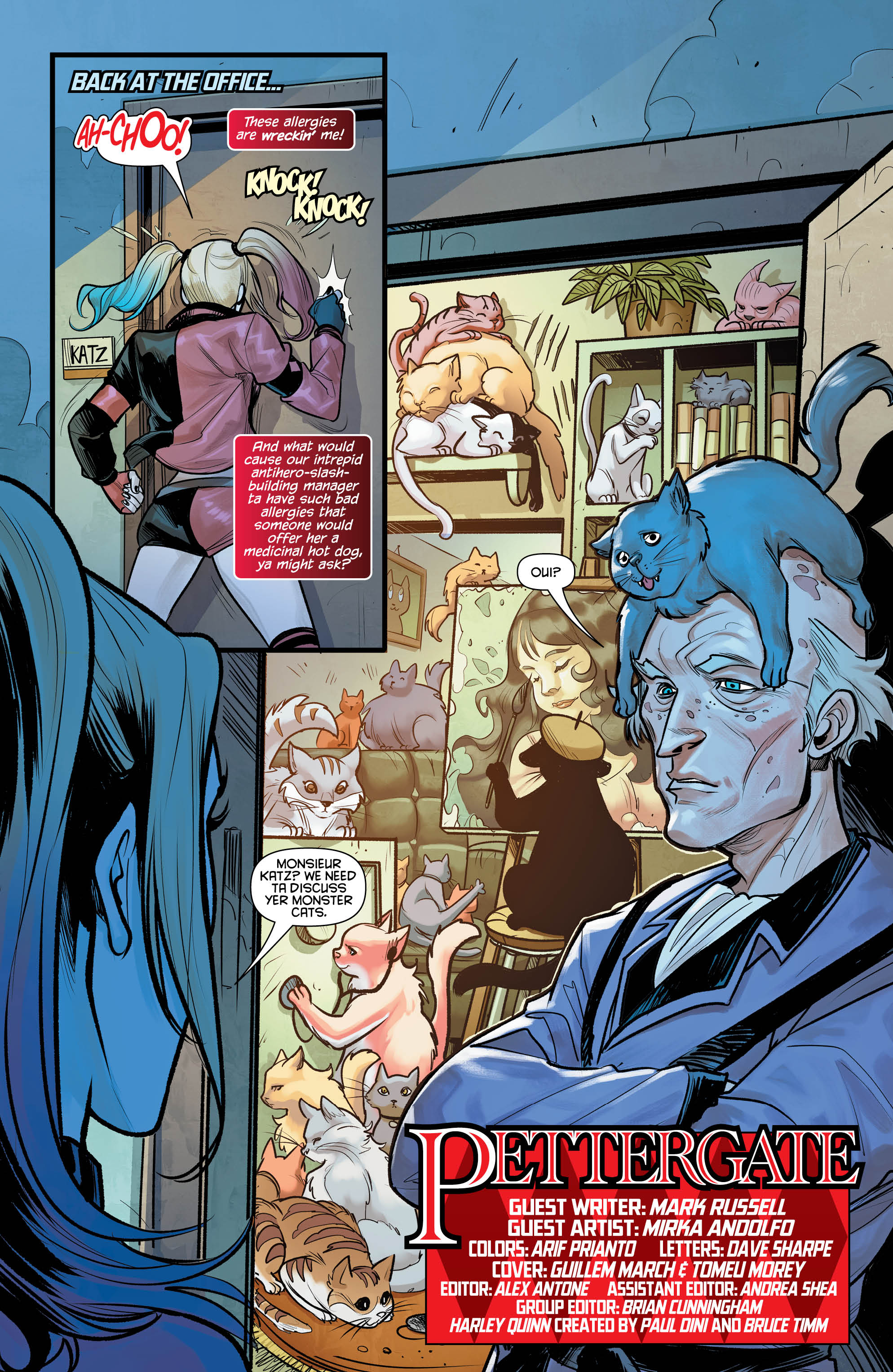 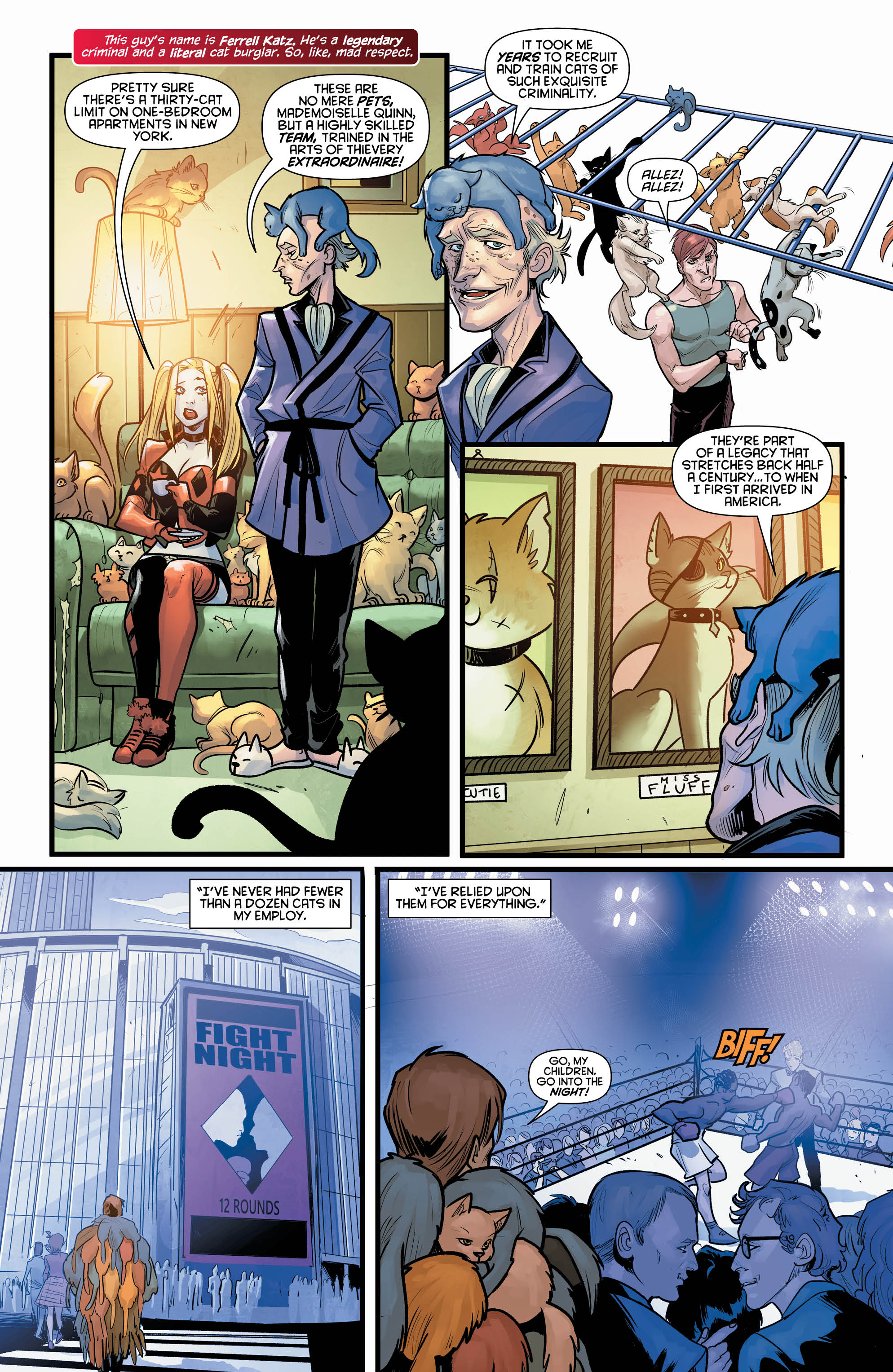 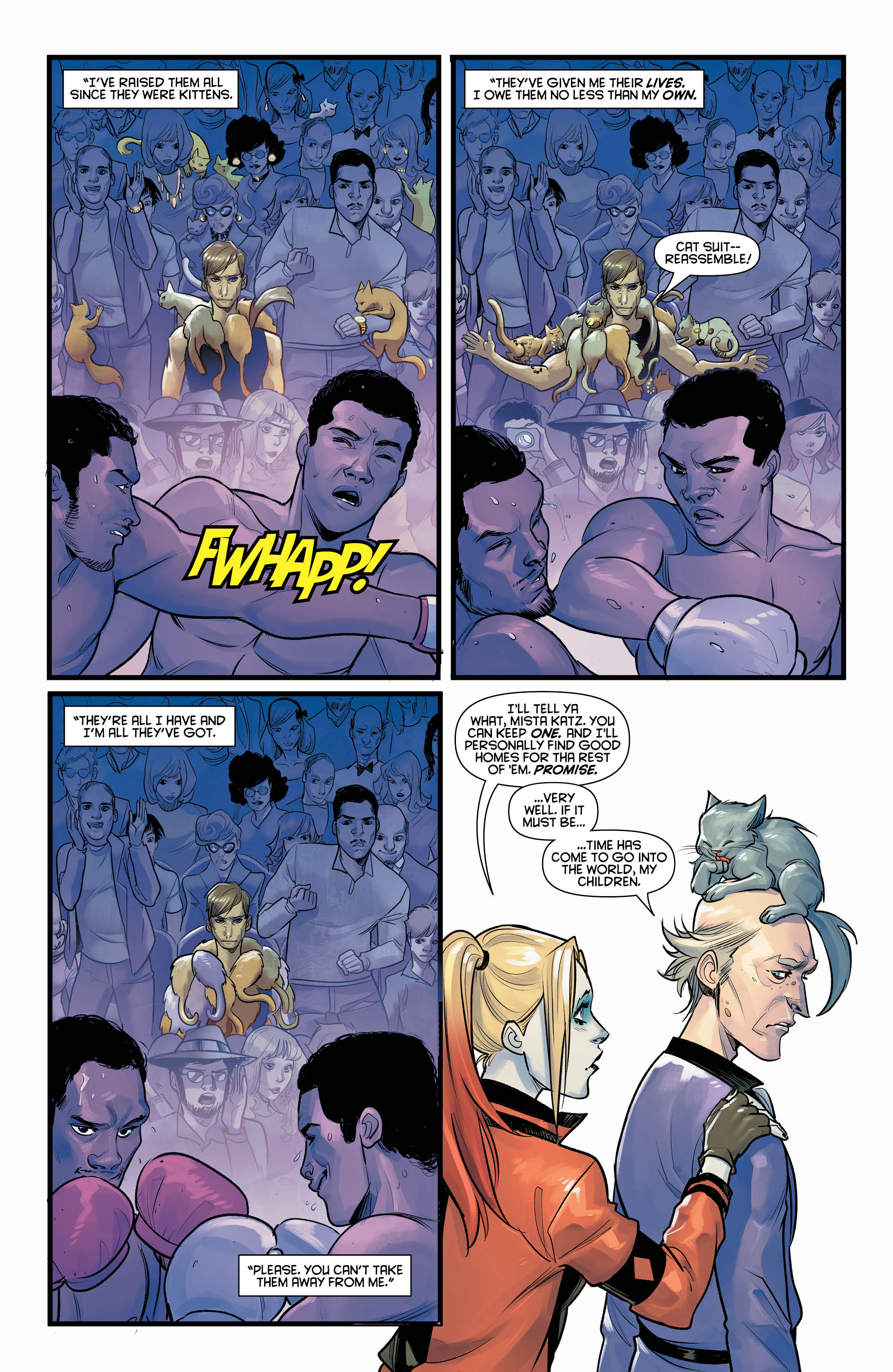 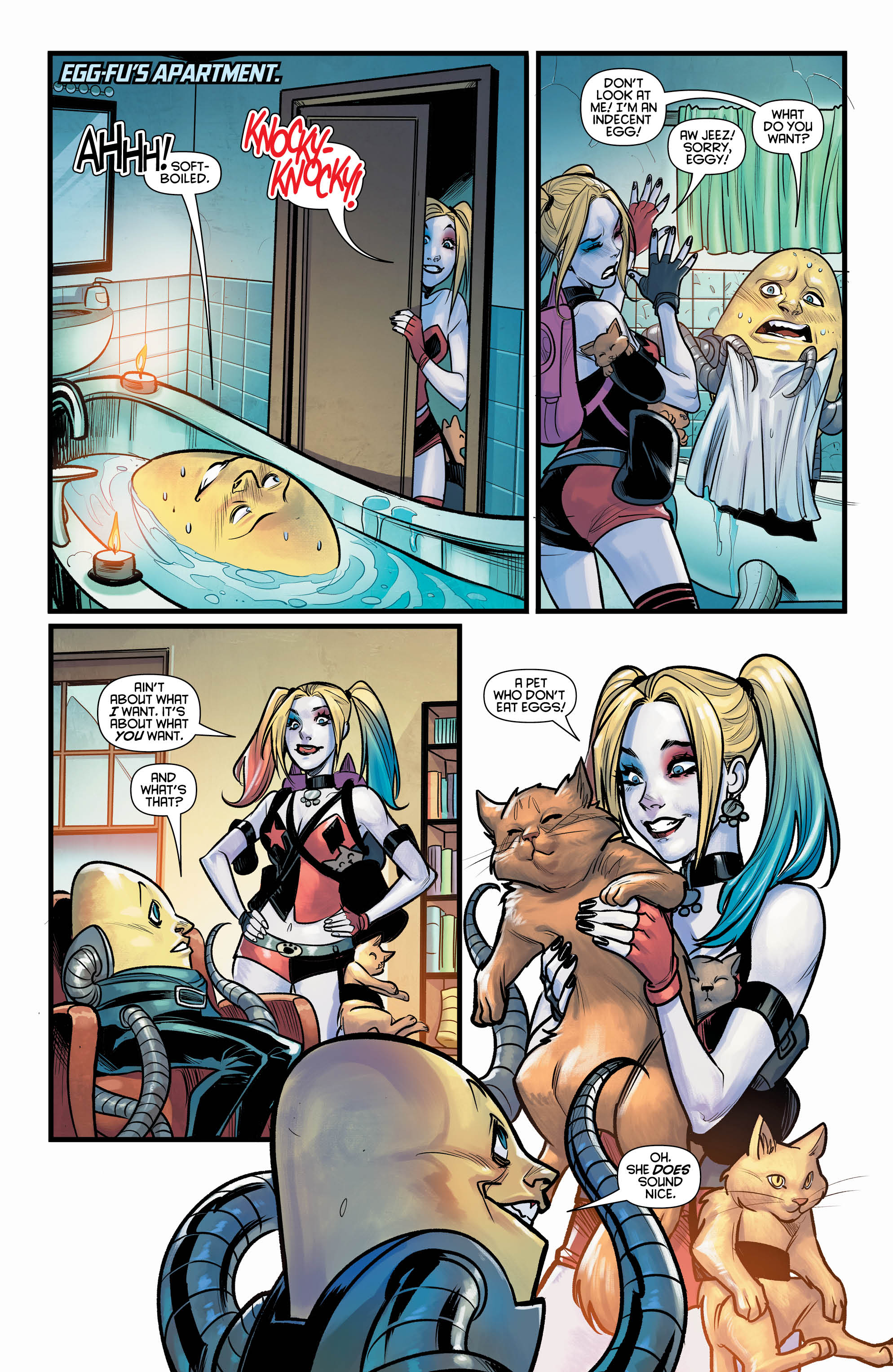 This one is probably the first issue of Harley that I have had any sort of issue with. While there is a decent story in the familiar faces we see, and Nateman’s Hot Dogs always make me giggle, this one doesn’t feel the same. It has a completely different vibe from the other books and, while yes this could be due to a different writer stepping into Sam Humphries’ shoes, moments in the book that should’ve come off fluid feel forced. This isn’t to say that the issue doesn’t have good moments; one of my favorites is a scene involving Catwoman and Harley discussing the ideals and their effects as a whole. Mark Russell gave great effort, it just didn’t quite click for me.

This is the first time I haven’t been fully pulled in by an issue so far. The story itself felt almost like this was a throw away piece and that has been so different from the rides Harley Quinn’s series has given us so far. I don’t honestly think this would be one I would read again, but I do like some of the messages. It’s just a hard jolt after what we learned in the last issue, which was a huge shock.

I’m really looking forward to the next chapter.

Until then, what are your thoughts? What do you think of the newest issue of Harley Quinn? Let us know in the comments below.