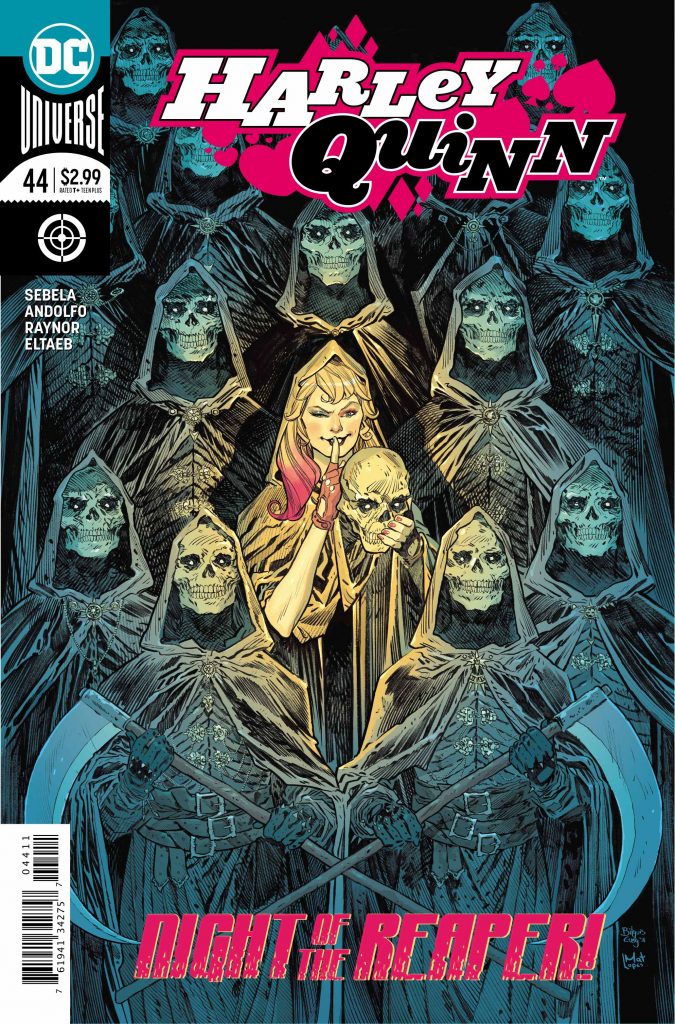 Harley Quinn #44 opens with Harley still chasing down those out to hurt her. From the last issue, she is watching over a new companion “Frank,” who escaped the clutches of Professor Pyg. This issue builds well and gives readers a few twists and turns.

The narrative is fairly straight-forward in this issue. The wounded and mentally unstable Harley seems to attract other wounded people to her. While known for a volatile relationship, Harley seems to bring people together and exhibits an uncommon loyalty. Here, readers see an unlikely romance develop and friends return.

There are a few areas where Harley Quinn #44 derails a bit. Some characters arrived that were assumed readers would recognize. As a new reader of the Harley Quinn title, I had no idea who these characters were. While anticipating some learning curve with a new title, I was thrown off a bit by this. However, the end of the story seems to indicate more to come from these friends. The conflict resolves rather quickly and without much depth. Still, as a two-part story, Harley Quinn #44 delivers an interesting, compact adventure.

I found the panels depicting Harley “facing her demons” to be both visually stunning and emotionally poignant. Voices in her head declaring all the reasons she’s unloveable was tough to read. It was an artistic way to showcase visually what many people experience regularly and often silently. This was a highlight of the issue for me. I hope it gives someone comfort to see these feelings visually and that it helps someone struggling with similar thoughts and feelings. 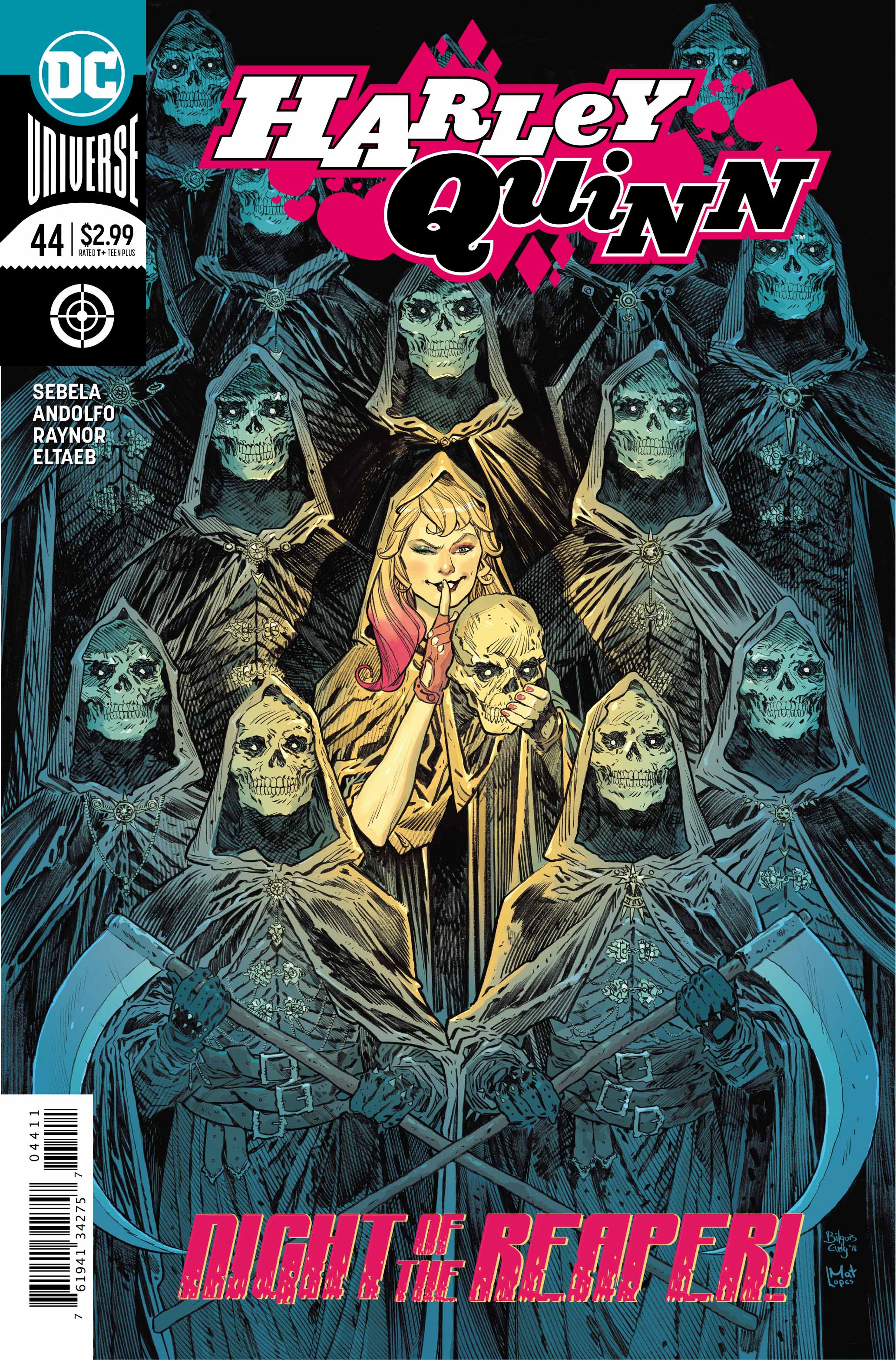 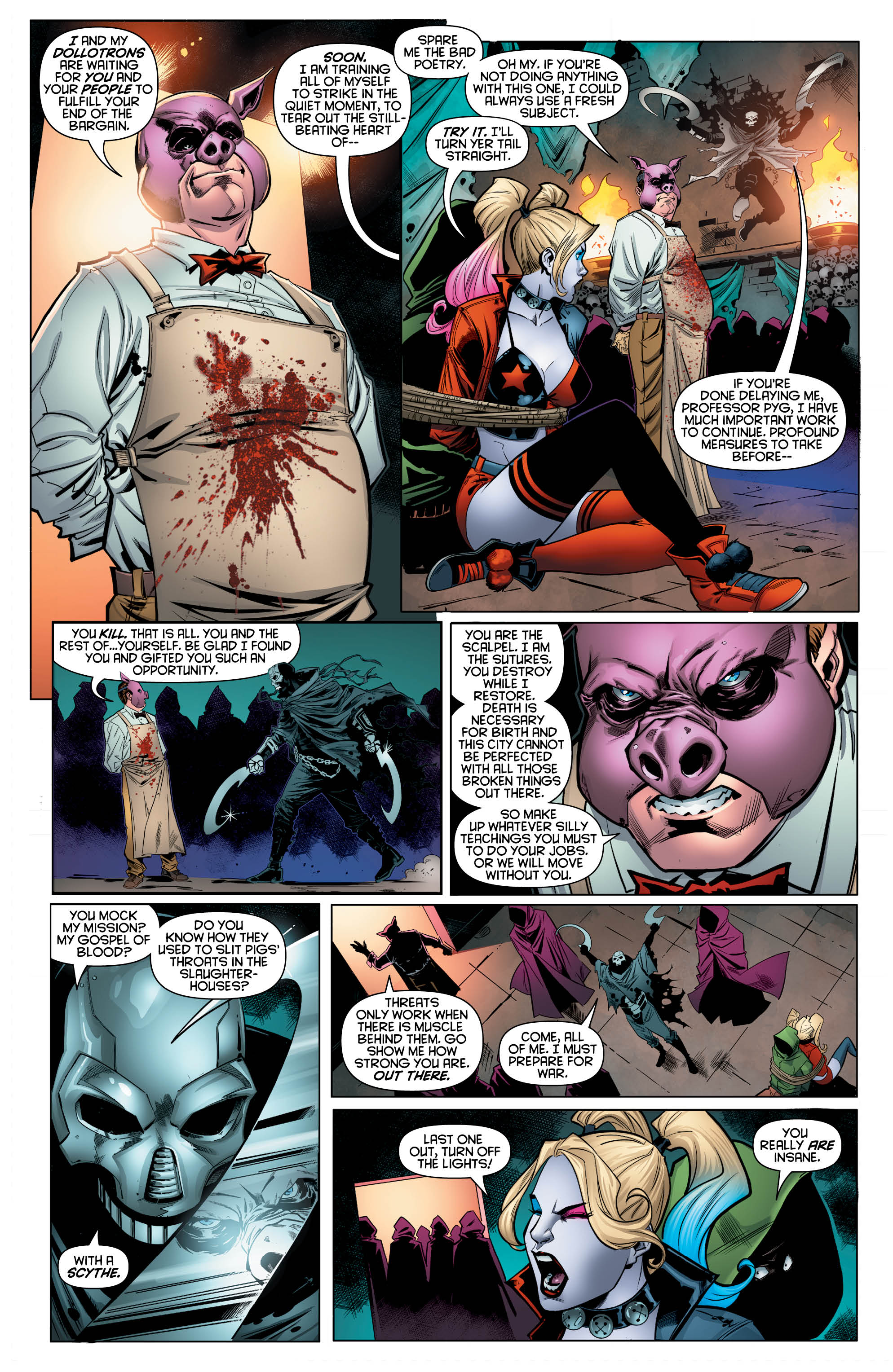 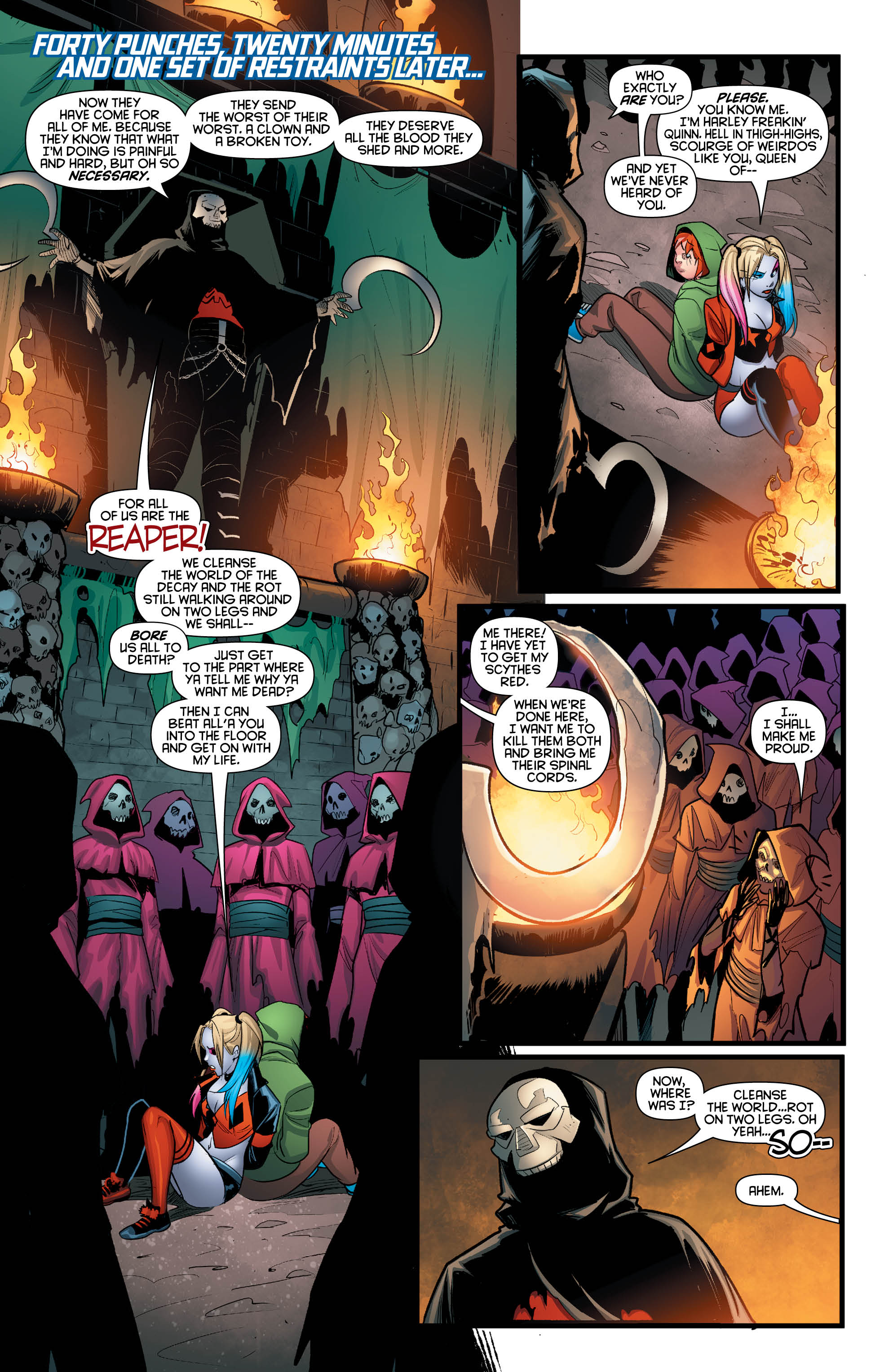 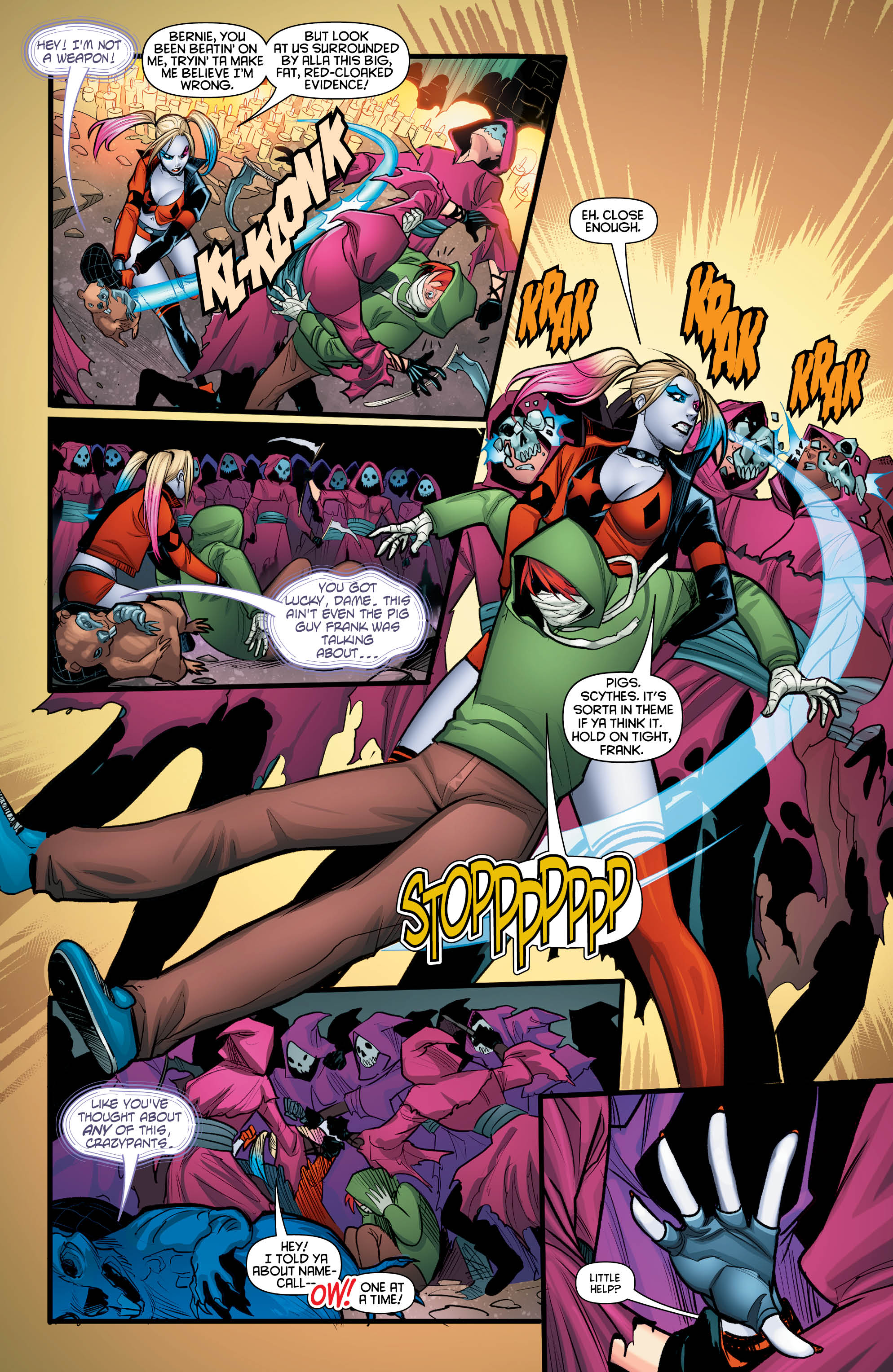 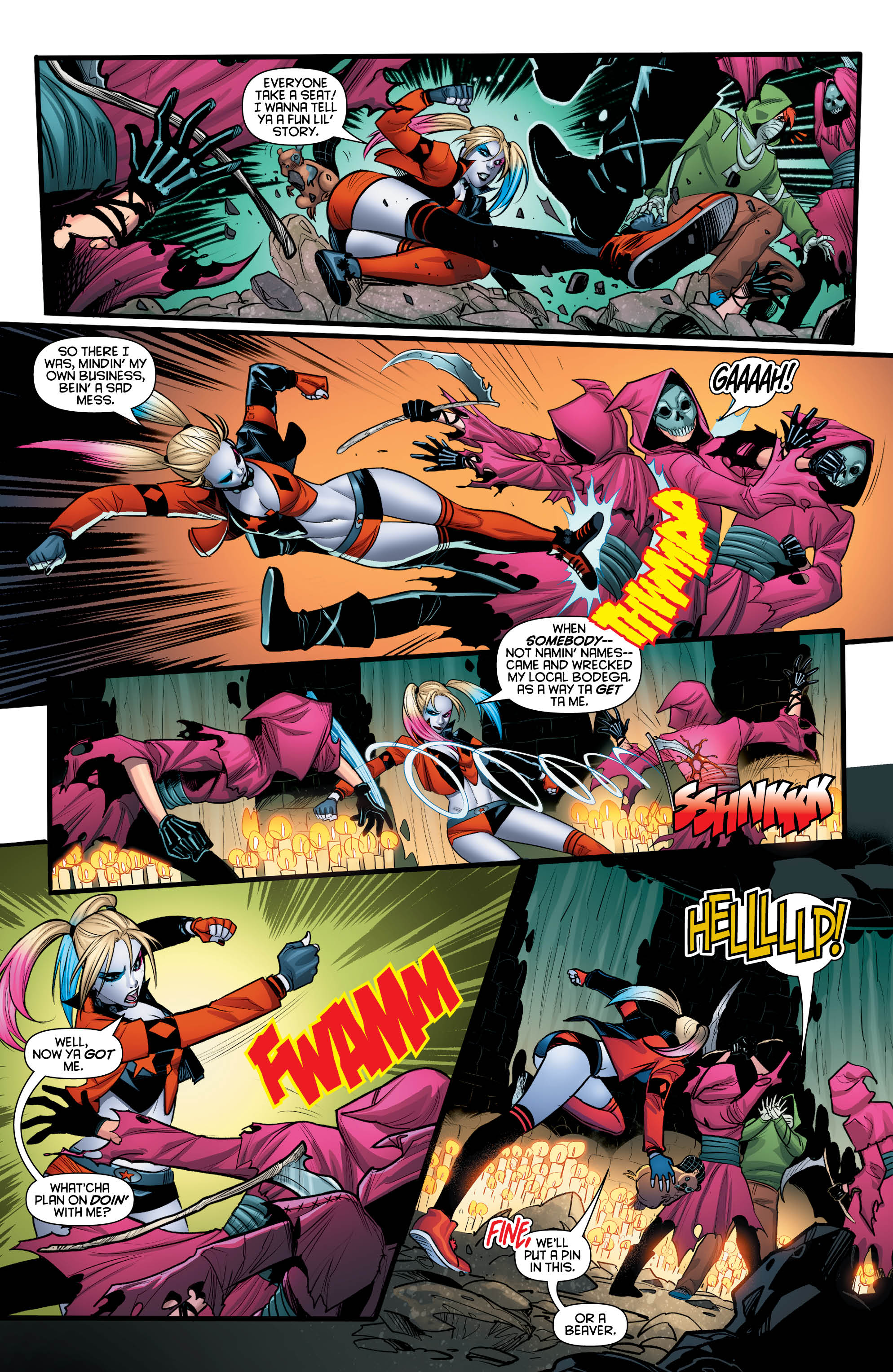 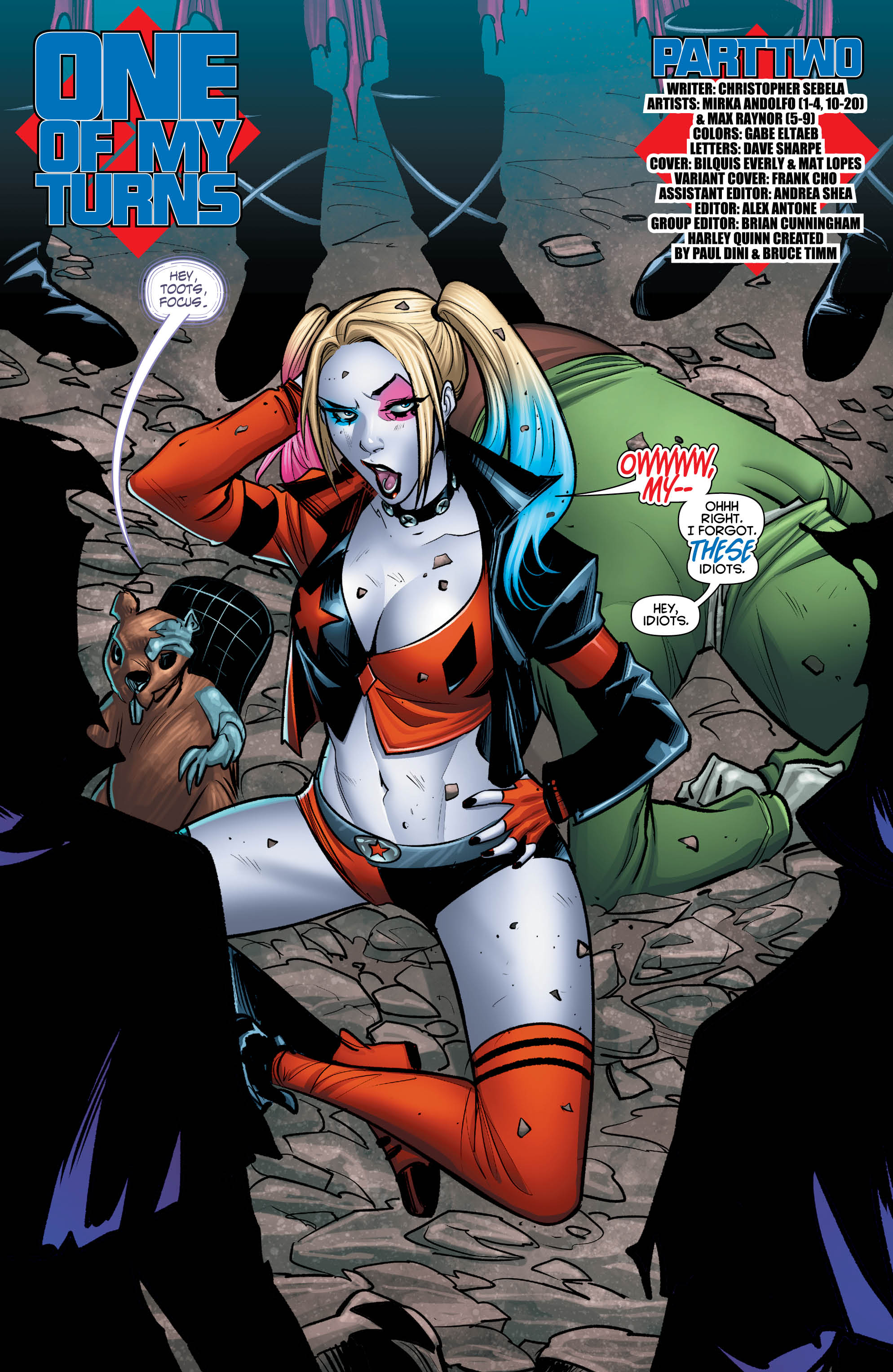 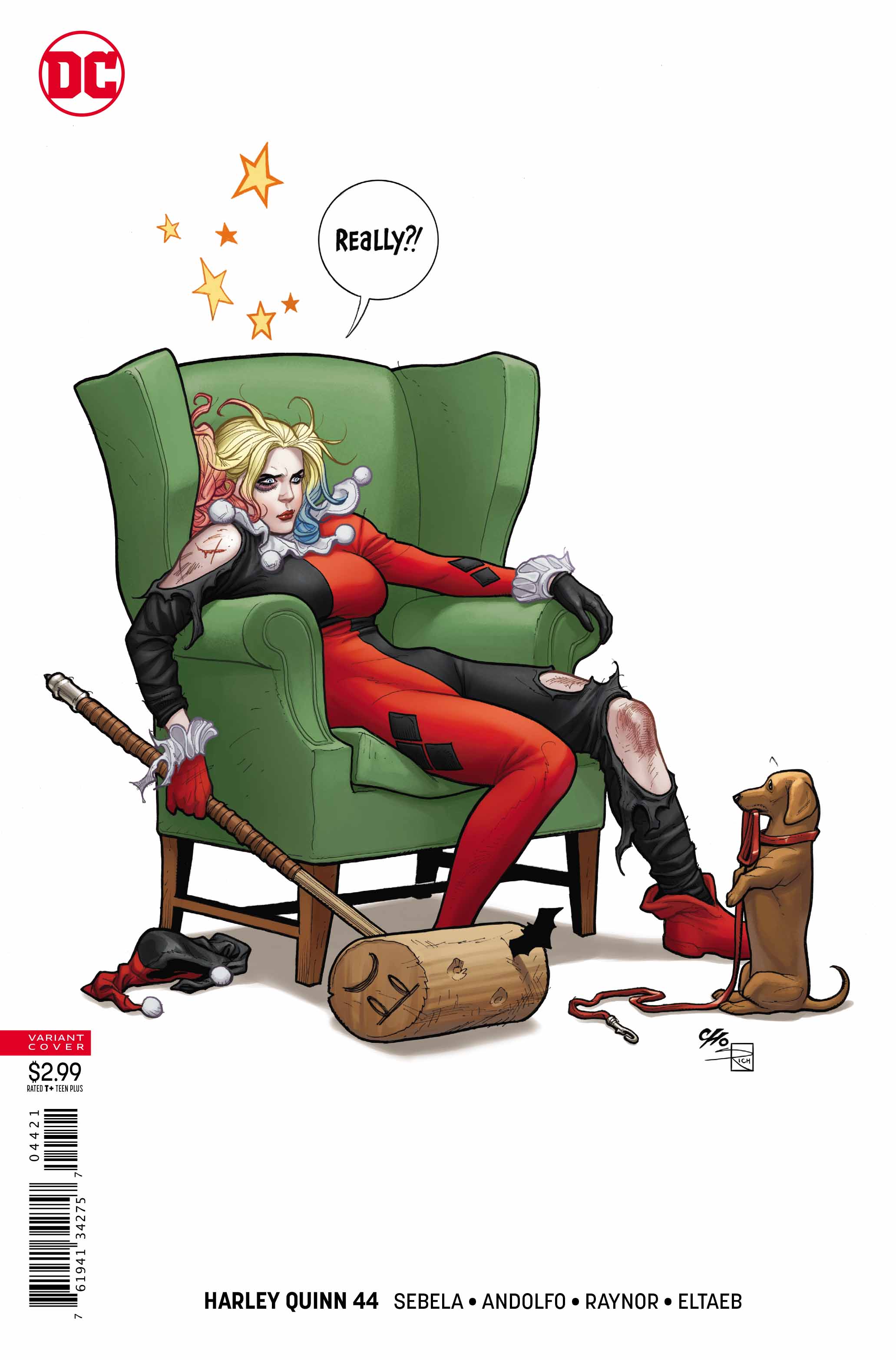 Harley Quinn #44 was visually pleasing. The hues added contrast and depth. Use of shadows was especially good. I found the detail work on the masks of The Reaper’s brood to be exquisite. And, that cover? Fantastic! Bilquis Everly and Mat Lopes outdid themselves. Harley fans may well pick up this edition for the cover art alone. It’s stand-alone beautiful and tells the story of the arch in a singular image. So good!

Professor Pyg looked menacing in the issue, as well. Pyg is such an interesting and enigmatic character and this depiction adds to the lore. The lettering gave significance to Harley’s outbursts. Additionally, it broke up the dialogue to make reading easier. I found the variety of shapes and sizes of the panels to be appealing. I liked the splash pages, in particular.

Harley Quinn #44 was a tidy wrap up to the two-part story. The narrative was clean and felt tighter than the previous issue. The conflict resolves fairly quickly but builds well and delivers a satisfying conclusion. At least one of the villains feels sinister and threatening. Relationships shine through and Harley Quinn #44 delivers some poignant moments. The issue was well rendered with vibrant colors, detail, and depth. And, that cover? Exquisite! Harley Quinn #44 was a solid issue, particularly when read as the conclusion of the two-part story.