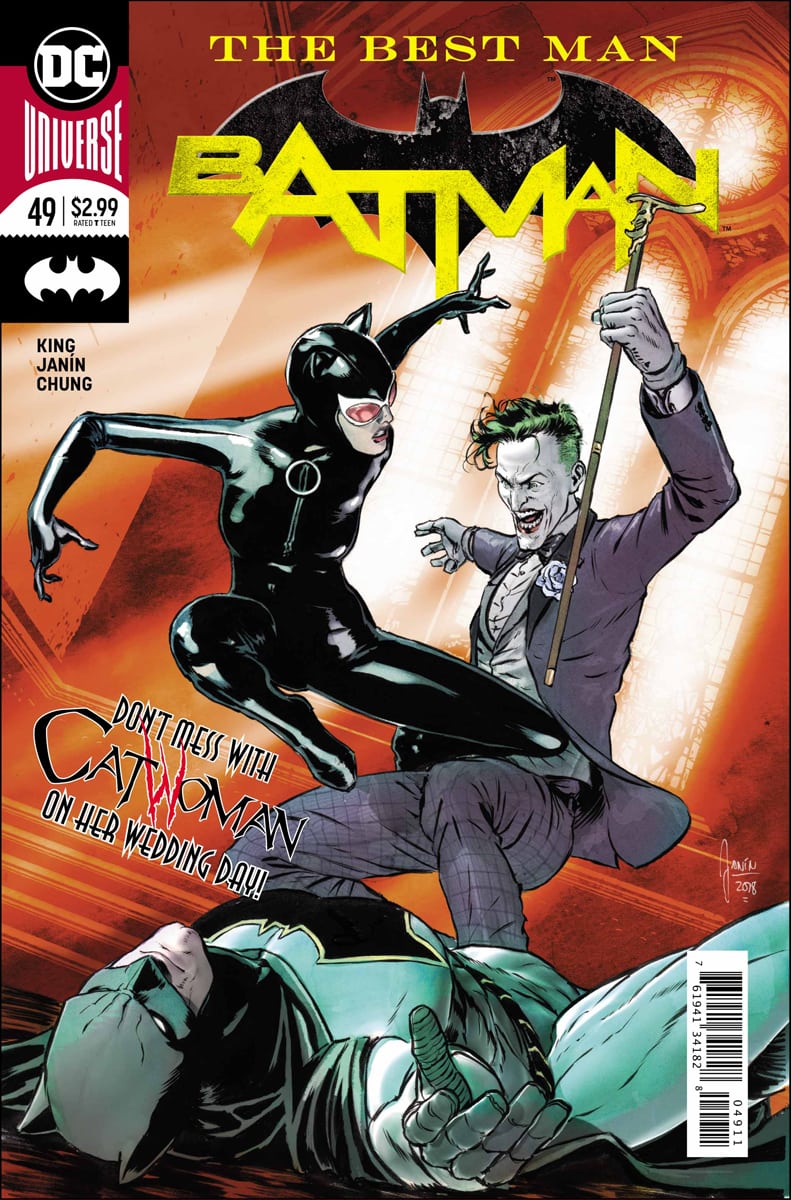 The Joker and Catwoman have a surprisingly intimate conversation as both of their lives hang in the balance in this flawed tale by Tom King and Mikel Janin.

This issue is probably one of King’s more idiosyncratic comics in a while. His preference to highlight the side-drama instead of traditional superhero action is in full-force here. This technique was highly annoying in his War of Jokes and Riddles story arc, but it is better utilized here. This is due to the fact that this confrontation is a more personable affair. It is essentially a compare and contrast between Catwoman and the Joker.

King does get a lot of mileage out of this dynamic. As Bat-fans know, the Joker’s antagonism towards Batman is more of a twisted love manifesting in murder. King shows that up next to Catwoman’s more traditional – though dysfunctional – love for Batman. Joker is having an existential crisis: If Catwoman can make Batman genuinely happy, will Batman need to even be Batman anymore? More pertinently, when he is married, will Batman need the Joker anymore? 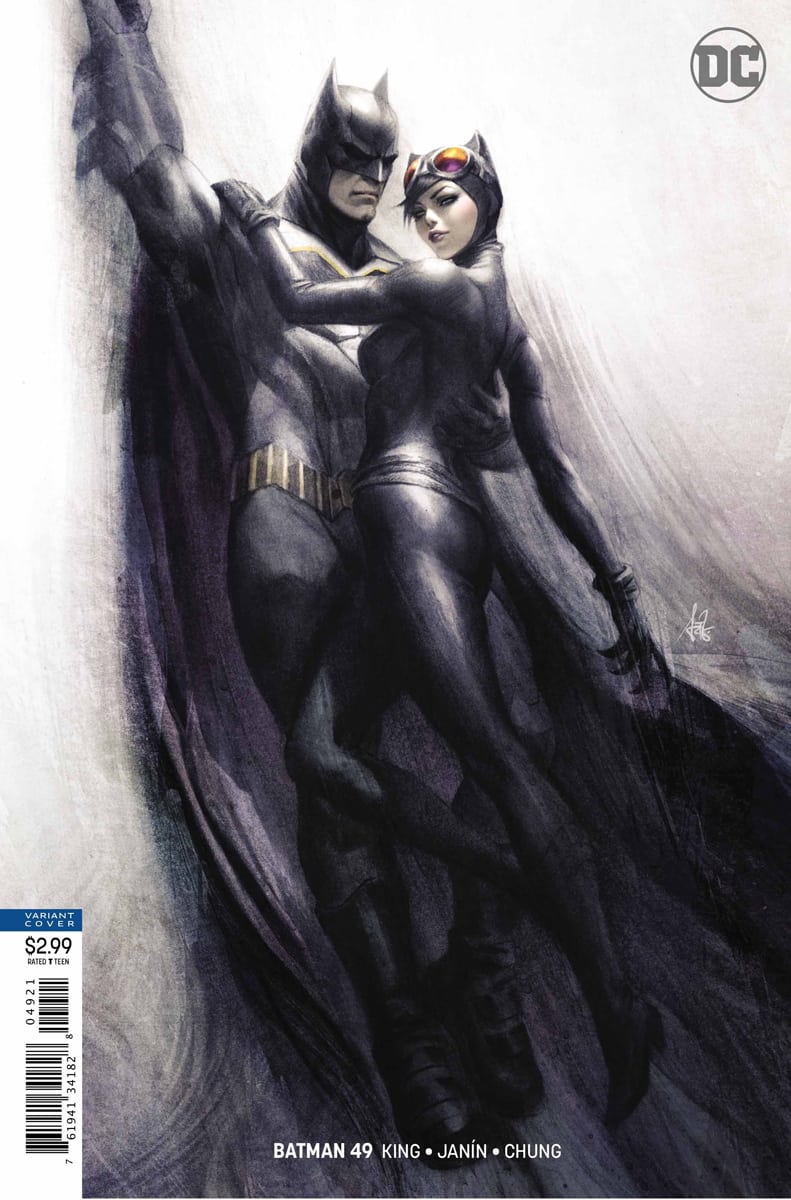 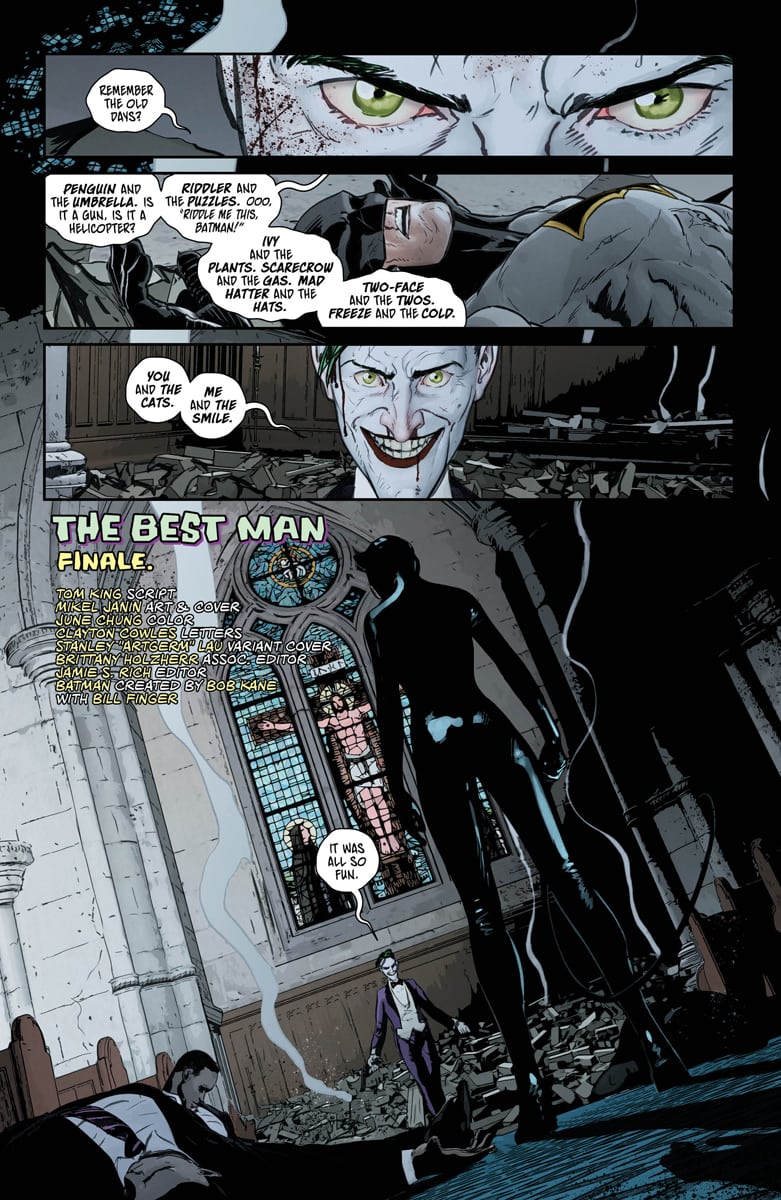 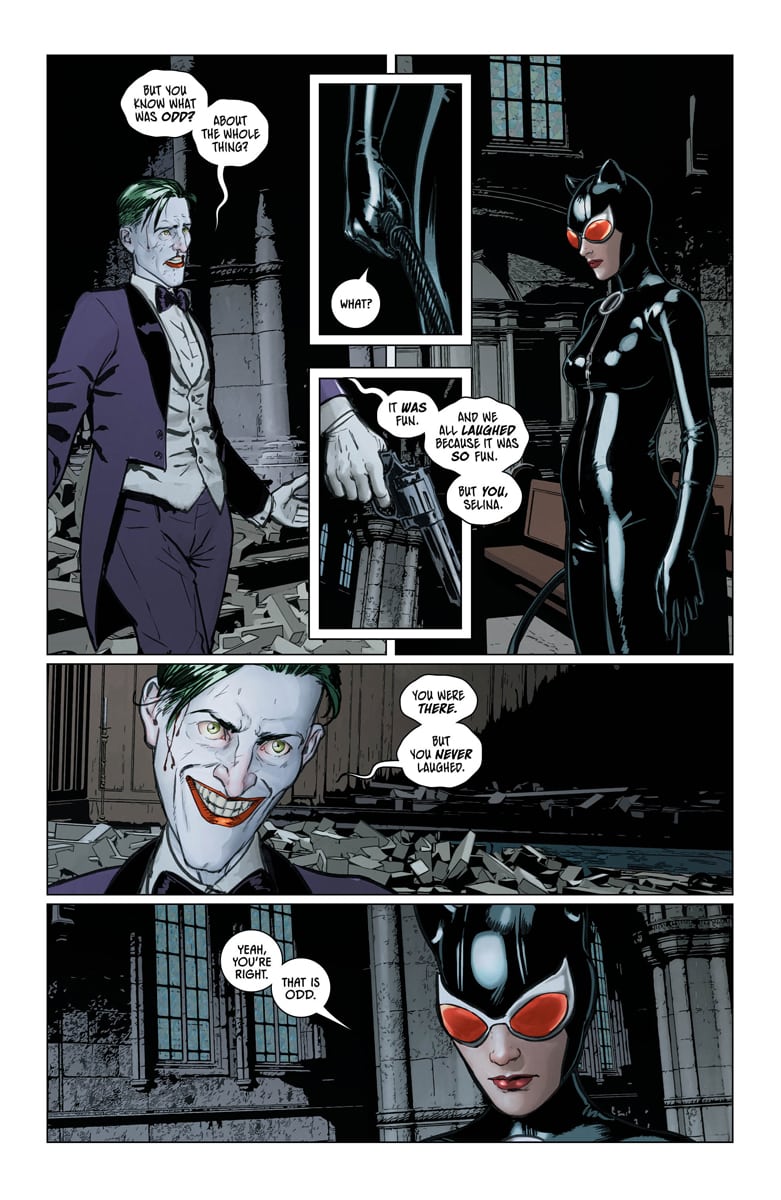 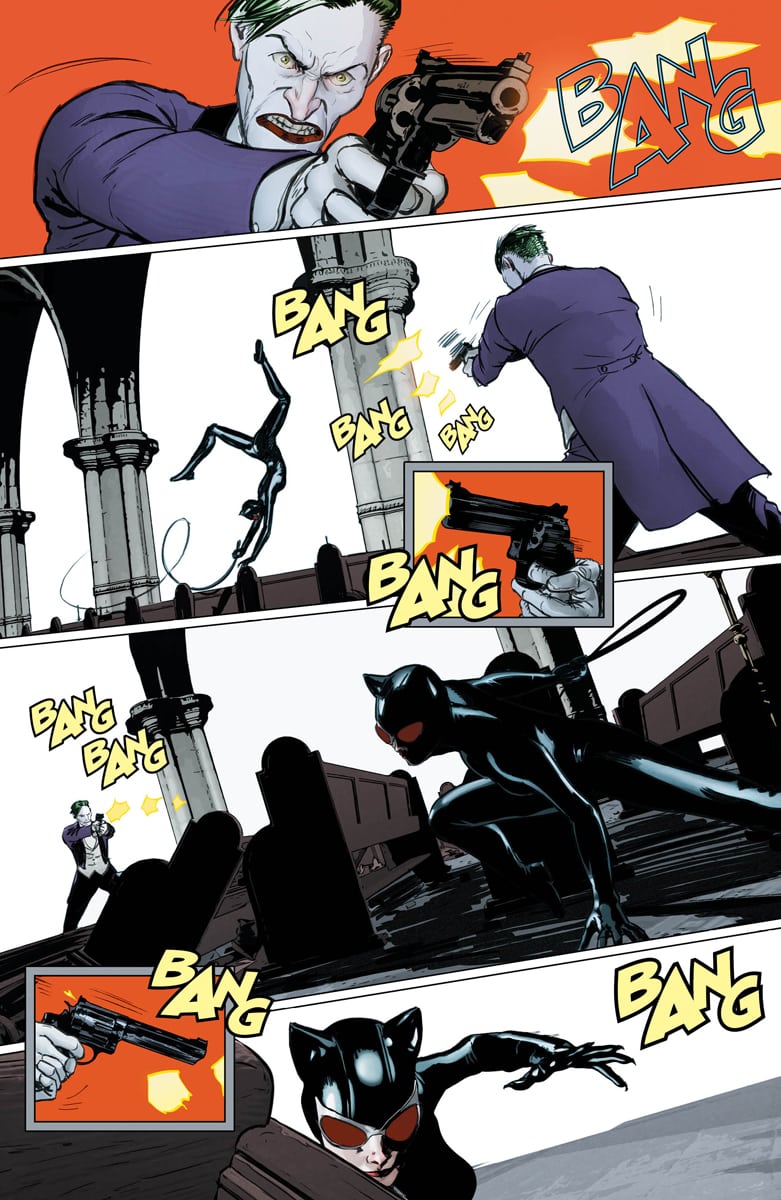 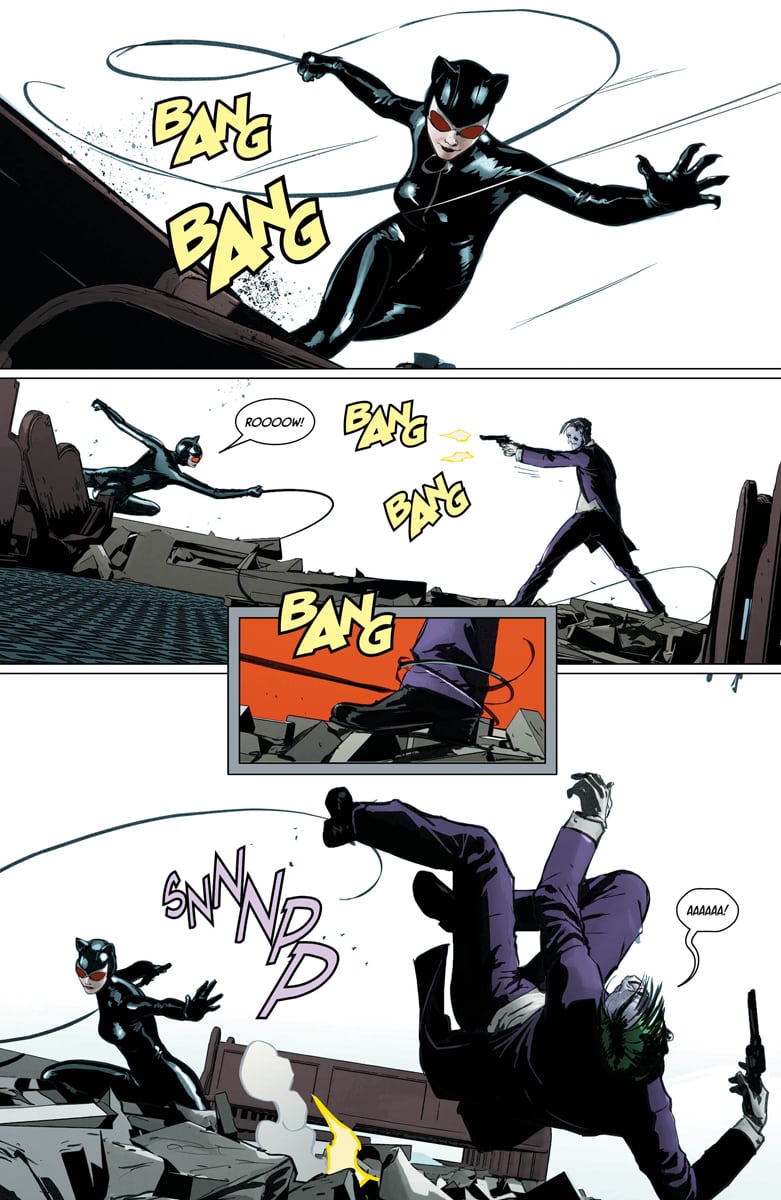 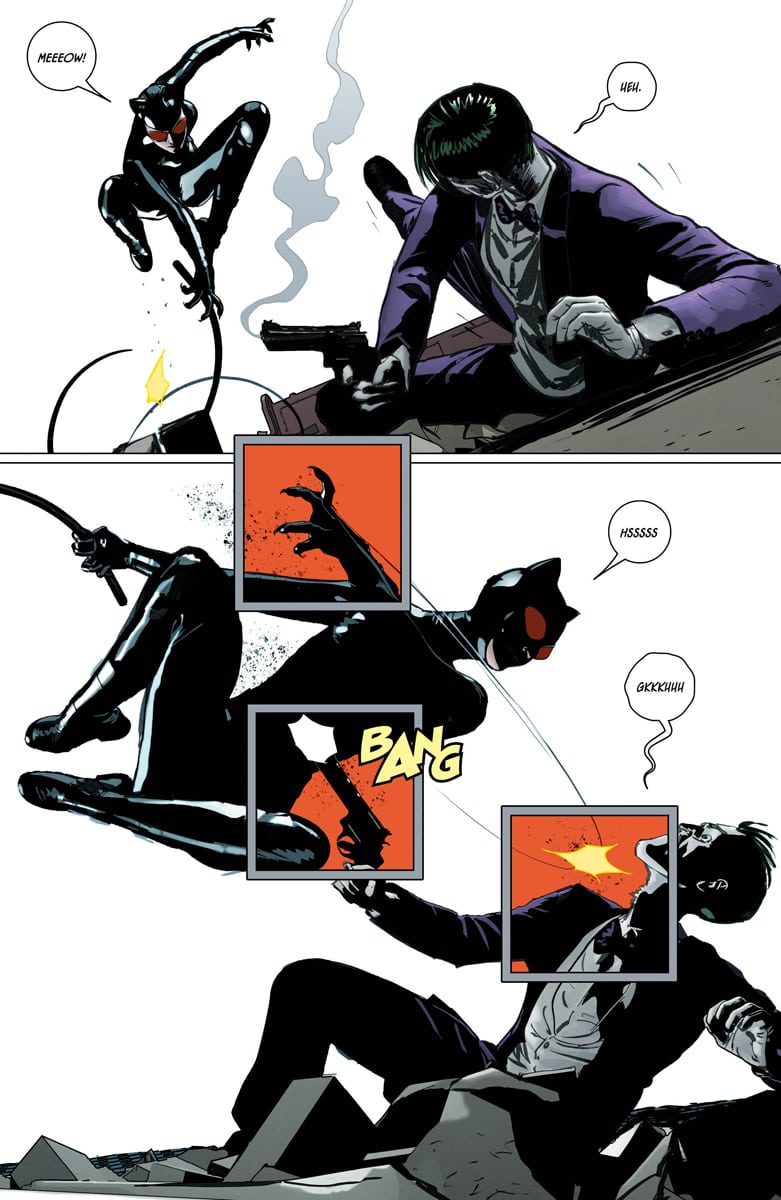 That is a cool examination that rises above the typical Joker/Batman dynamic. Catwoman is a threat to the Joker. Not just physically, but also because of how she will shake up Batman’s status quo. King raises some genuinely intriguing questions.

Furthermore, Janin’s beautiful art helps dictate the drama of the conflict. The majority of the issue is Catwoman and Joker just talking. There is a physical danger that looms over the characters as well. Janin’s subtle expressions and body language reminds readers of that without hitting them over the head with it.

With that being said, illogical actions and stupidity dictate the plot. Catwoman and Joker reach something of a stalemate early on. But they literally lay there for the rest of the issue, not doing anything. Additionally, Batman is depicted as an impotent boob. He literally does nothing. Also, in light of the revelations between Catwoman and Joker, his dialogue comes off as  hilariously oblivious. He does not even appear on-panel. Furthermore, a bomb went off in the church last issue, but no police ever responded. Are the GCPD that incompetent?

The worst part is that the whole premise of this issue is predicated on Batman’s rogues gallery being somewhat friendly with each other. This is a really strange idea. It is never mentioned before and is out-of-character for an normally unfriendly Joker to pal around with, say, Two-Face. They are not like the Flash’s Rogues. They do not typically work as a team or hang out, since they all have wildly different agendas. It simply does not work.

It is clear that King and Janin have volumes to say about the Joker and Catwoman. These are great motifs that spin-off from the conventional “Joker secretly loves Batman” idea. But King forces the characters to jump through a lot of plot hoops to get there. It takes them out-of-character and, worse, makes them idiotic. This issue is profound, but highly flawed.