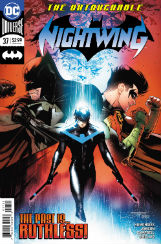 Holy Bat Story! This was one darn good issue! Nightwing #37 is my favourite issue in “The Untouchable” story arc so far. This issue finally done what I’ve been waiting for; elaborated The Judge’s connection with Nightwing.

In Nightwing#37 we journey back to the early, early days of Nightwing’s crimefighting career. Back when he was still Robin. The story begins with our titular hero meeting with an old ally, Ms Lucy Weatherton. Before she became a successful businesswoman, Ms Weatherton herself protected the streets of Bludhaven as the baseball bat wielding vigilante, Baby Ruthless.

Flashback several years; Baby Ruthless and the Dynamic Duo work together to defeat the half-shark, half-man thug, King Sturgeon. Who also happens to be Guppy’s father. The Dynamic Duo were able to locate The Judge to a nearby harbour, with the help of Baby Ruthless.

The usual happens: fists are thrown, Robin performs a daring stunt, the Dynamic Duo and Baby Ruthless engage in an all-out brawl with The Judge’s henchman. Which, unfortunately culminates with The Judge escaping from Robins’ grasp.

That day has haunted Nightwing ever since, unless that murderous maniac is brought to justice. 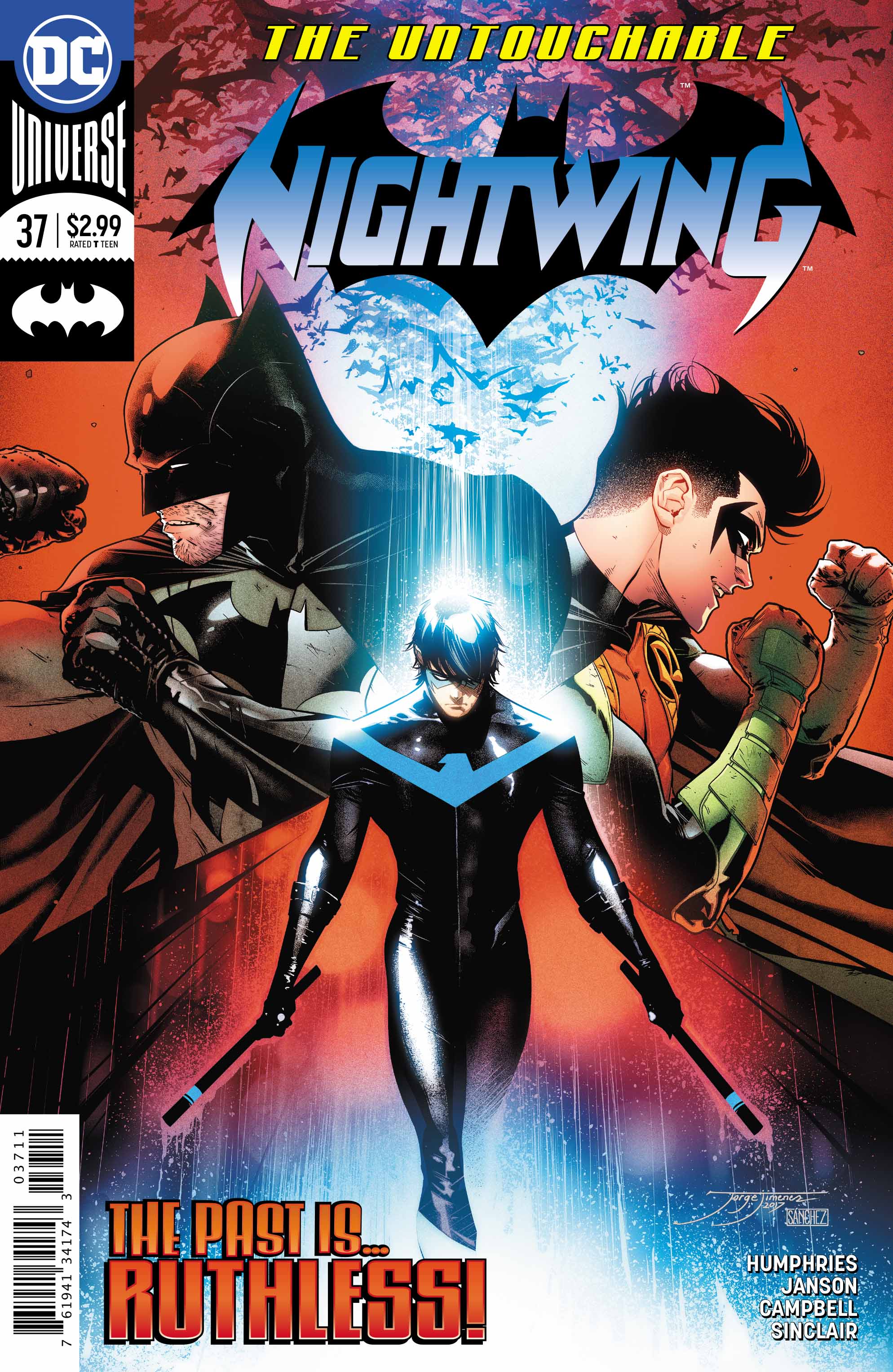 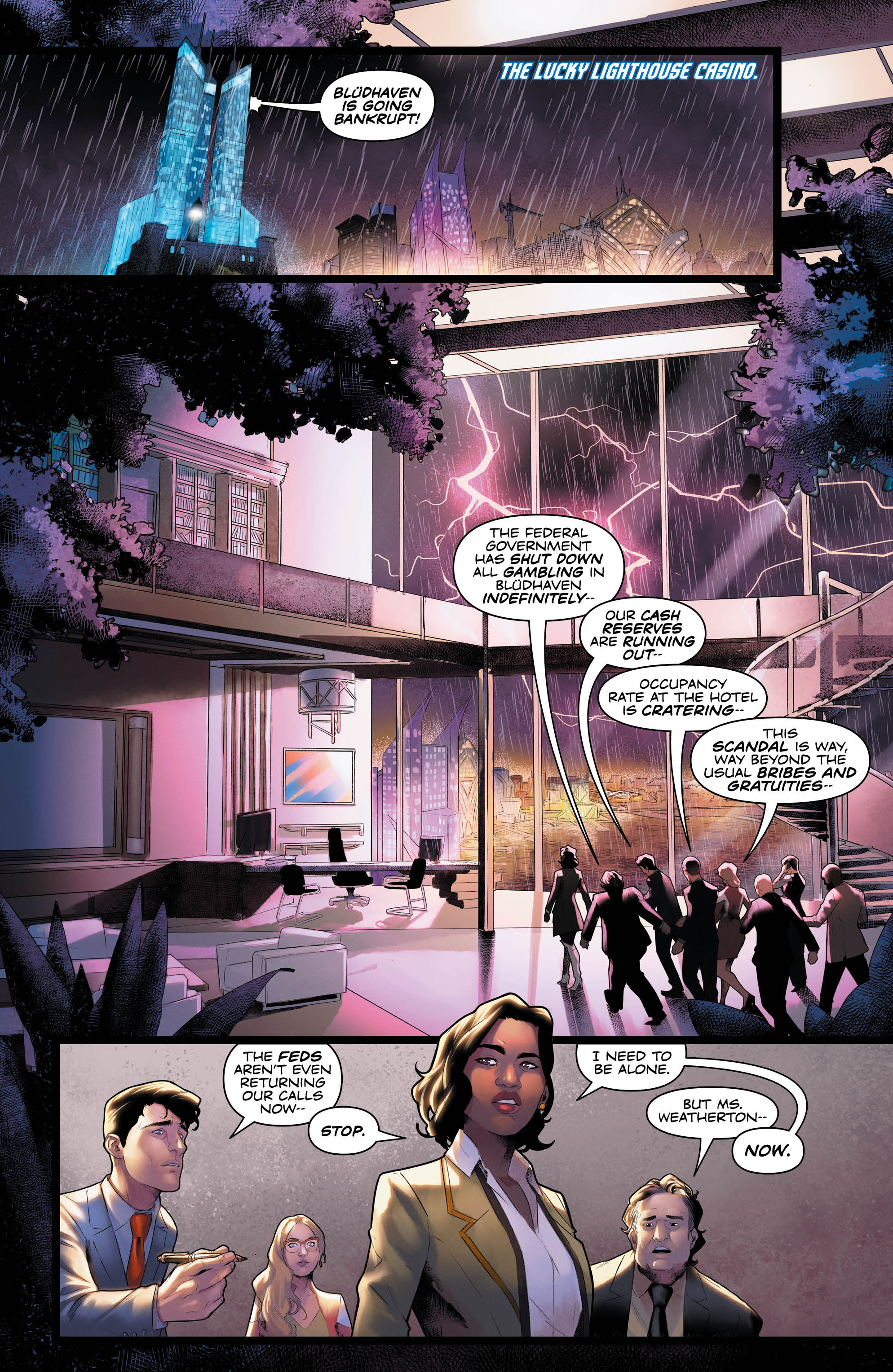 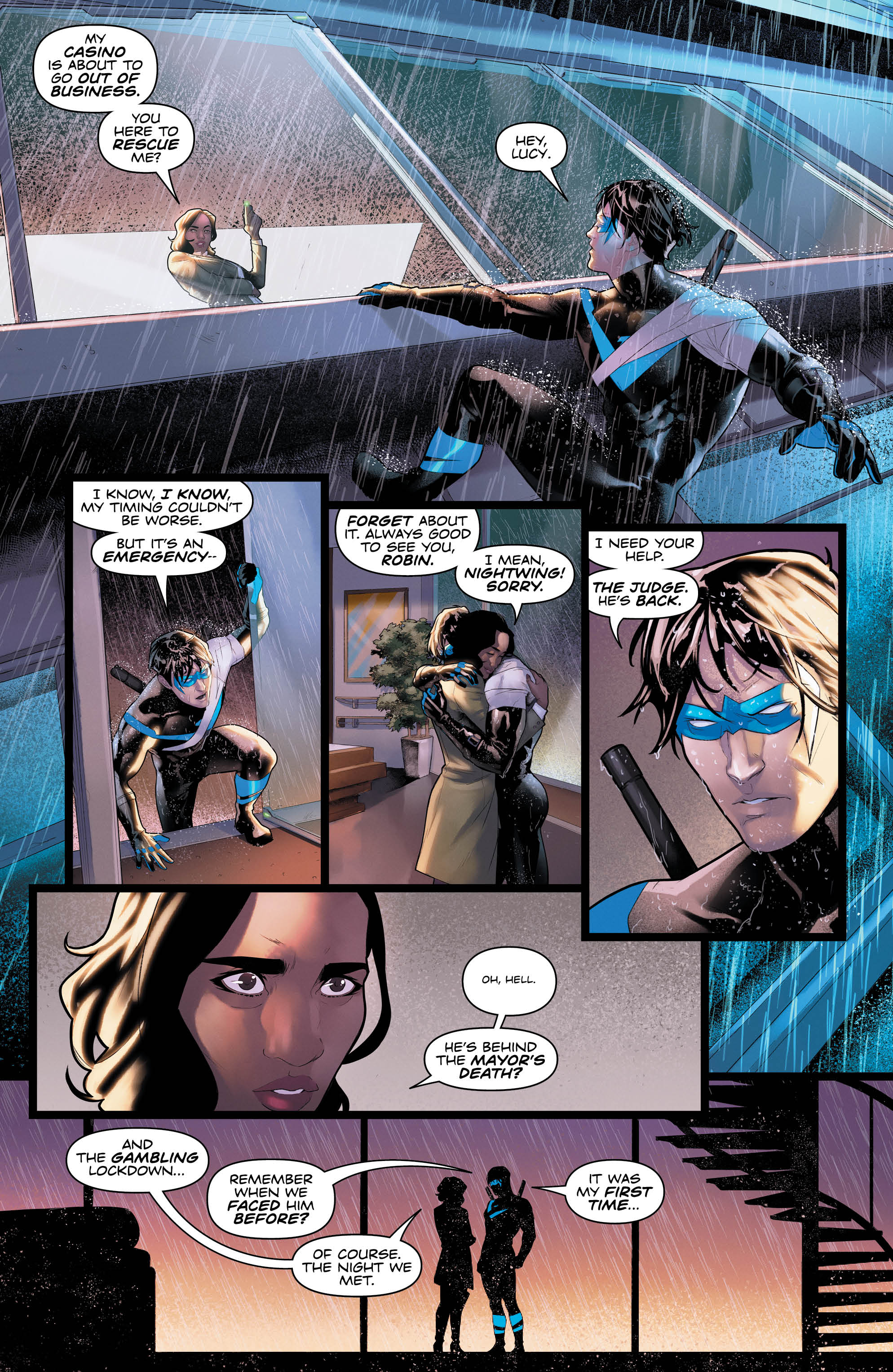 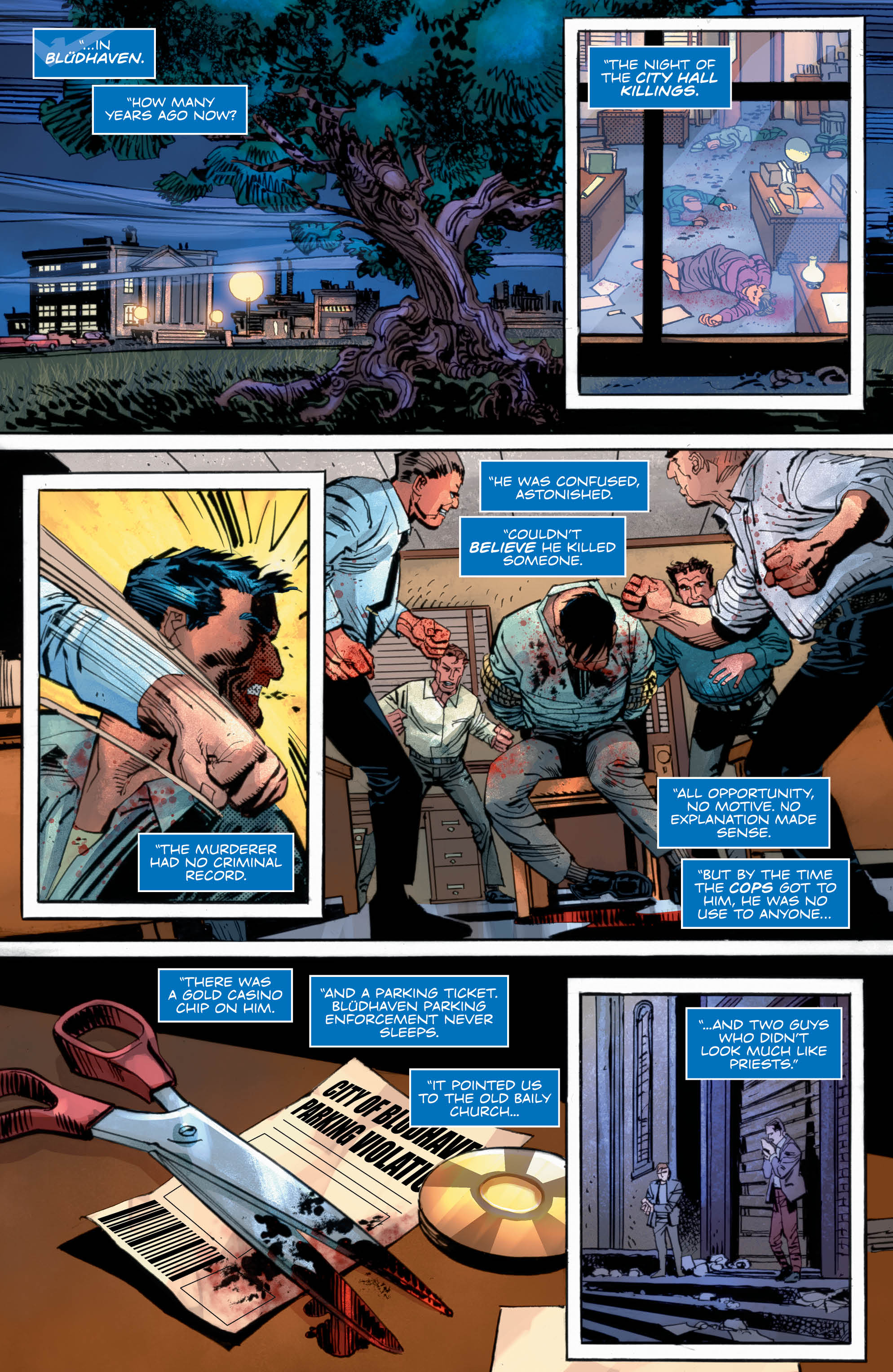 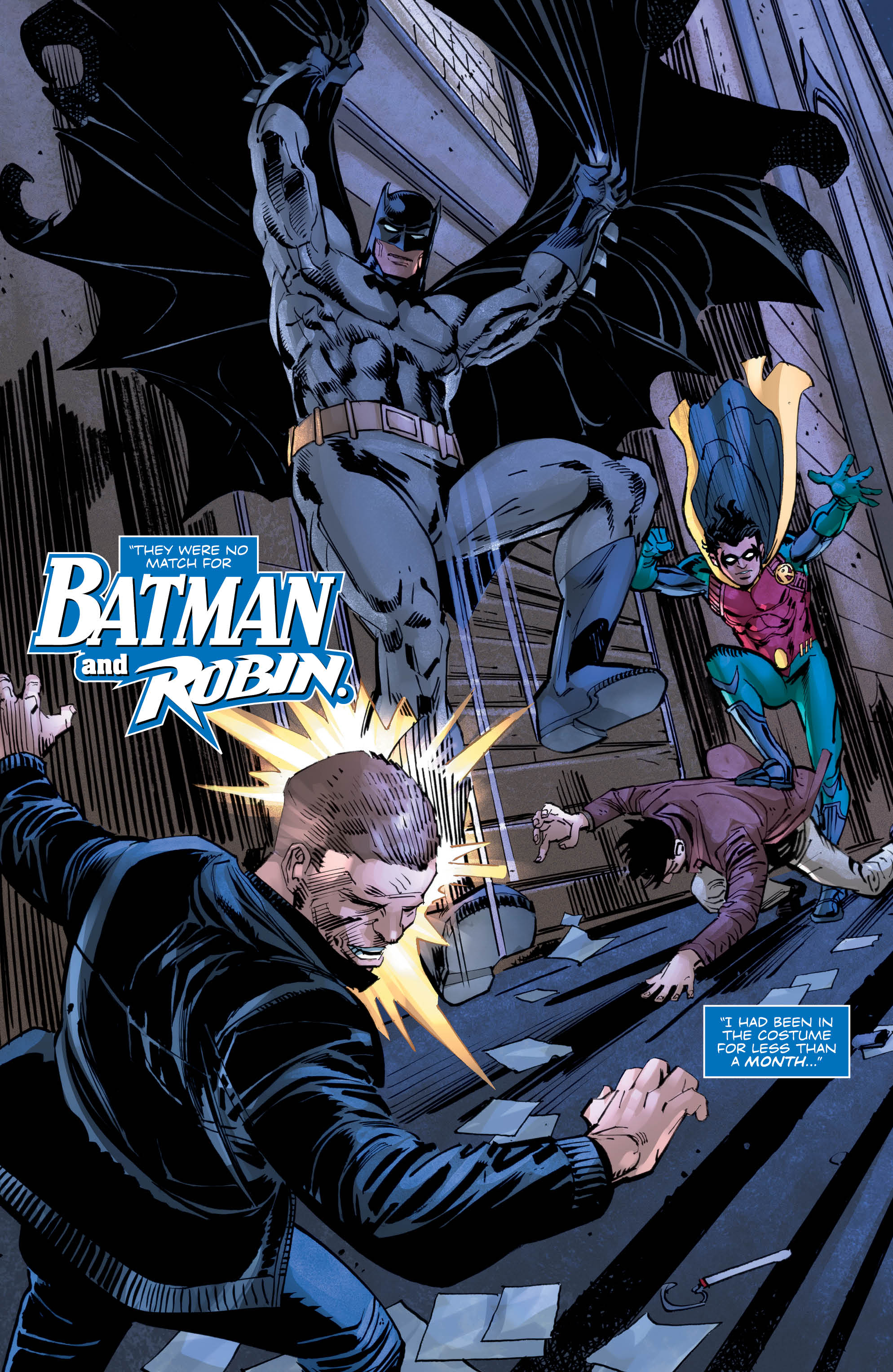 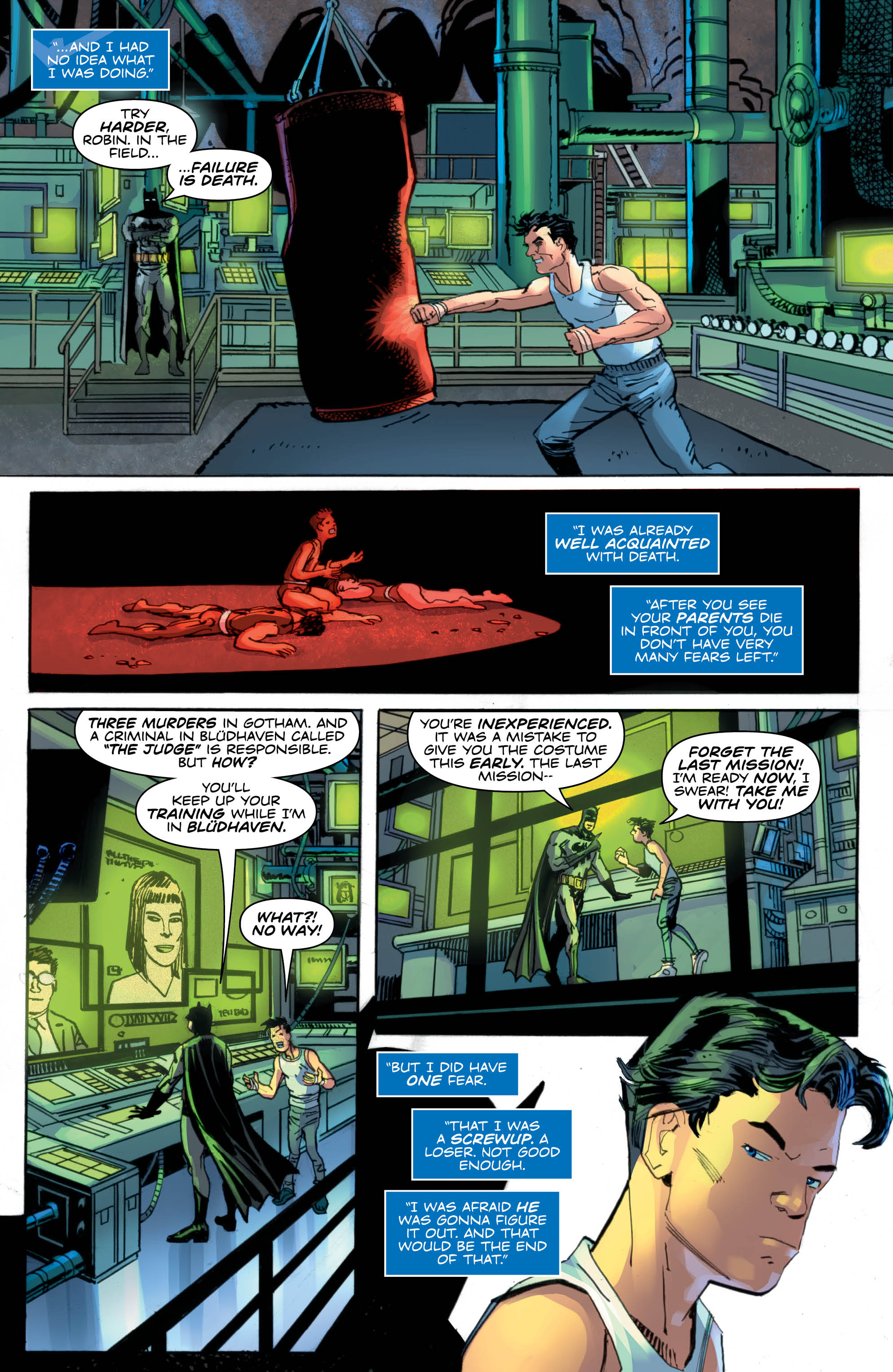 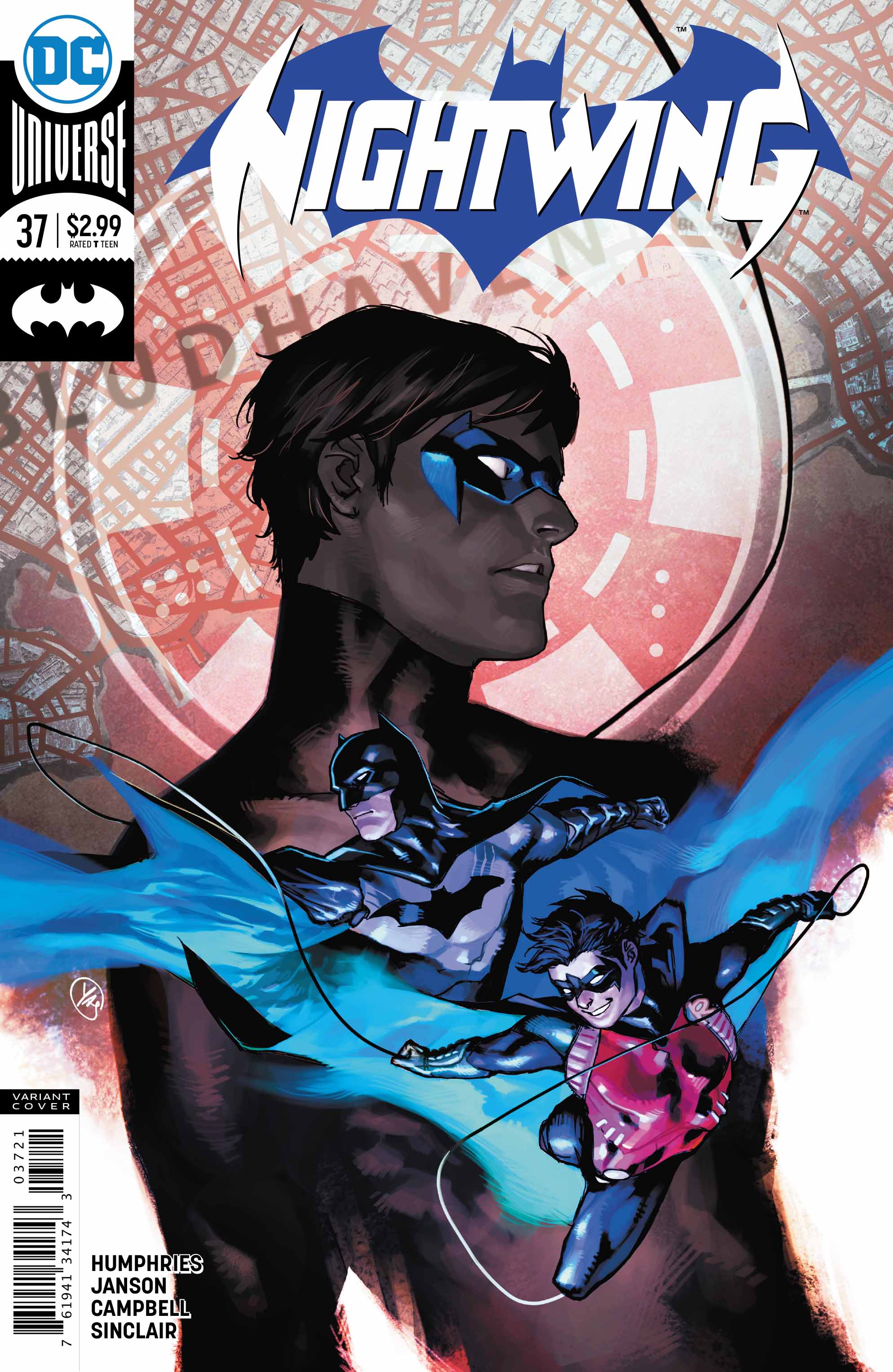 What really gripped me about this issue was the heavy emotional weight of the story. Robin’s first encounter with The Judge occurred in a very turbulent period in his life. Their initial meeting happened in the early stages of Dick Grayson’s career (he’s only donned the costume for less than a month), and shortly after he lost his parents.

Robin resorted to using crimefighting as an outlet for his grief, despite his minor experience. He was also desperate to prove himself to Batman and hoped by catching the villain his pain subside. Consequently, his desperation and feelings made him reckless, very reckless. Robin’s recklessness resulted in The Judge escaping.

I honestly found Robin’s emotional turmoil was a much more compelling story than whatever the heck The Judge’s plans were. I respected how Sam Humphries took a thoughtful approach to sensitive themes like loss and coping. It was heartbreaking witnessing our hero endure so much anguish. After all, he’s still just a kid, and now an orphan. One of the most heart-wrenching moments in the comic, was when Robin faced the dilemma that Batman would abandon him, due to his failure.

“Easy, Robin. Next time…you’ll do better.”

Is that a teardrop on my keyboard?

Nightwing #37 is a special issue as it features two artists. The flashback sequence is illustrated by Klaus Janson. While the present day sections are illustrated by Jamal Campbell, who was also the artist for Justice League of America #7. I reviewed Justice League of America #7 and the artwork was my absolute favourite aspect of that issue. I stared in awe at the artwork throughout my read through. I was overjoyed when I learned Jamal Campbell would illustrate issue #37. But, saddened that his segments were only 4 pages long.

Also, how could I not mention the stunning cover art by the ever talented Jorge Jimenez and Alejandro Sanchez! I’ve been following Jorge Jimenez on Instagram and I’m really impressed with his artistic abilities. Hopefully he may even illustrate the series one day.