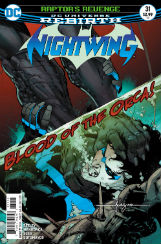 Ok. I’m going to be honest. I found this issue to be very underwhelming, especially after the game-changing ultimatum Nightwing placed upon himself at issue #30’s conclusion. I was really hoping that issue #31 would craft a story upon that same ultimatum. Instead, it feels like this issue completely forgot about the ultimatum altogether.

Here’s a quick recap of issue #30 and what lead to said ultimatum.

After freeing Spyral from the clutches of a dangerous A.I, Nightwing returns to Bludhaven to resume his fight against crime. Many things happen since his return, good and bad.

He begins a relationship with Huntress (Helena Bertinelli).

Saved some innocent hostages from a group of mutant fishmen.

….And an old friend and former mentor of his remerges from the past, the deadly assassin- Raptor.

Knowing full well how much of a threat Raptor poses for Bludhaven and it’s citizens, our hero presents the hulking villain Blockbuster with an ultimatum: 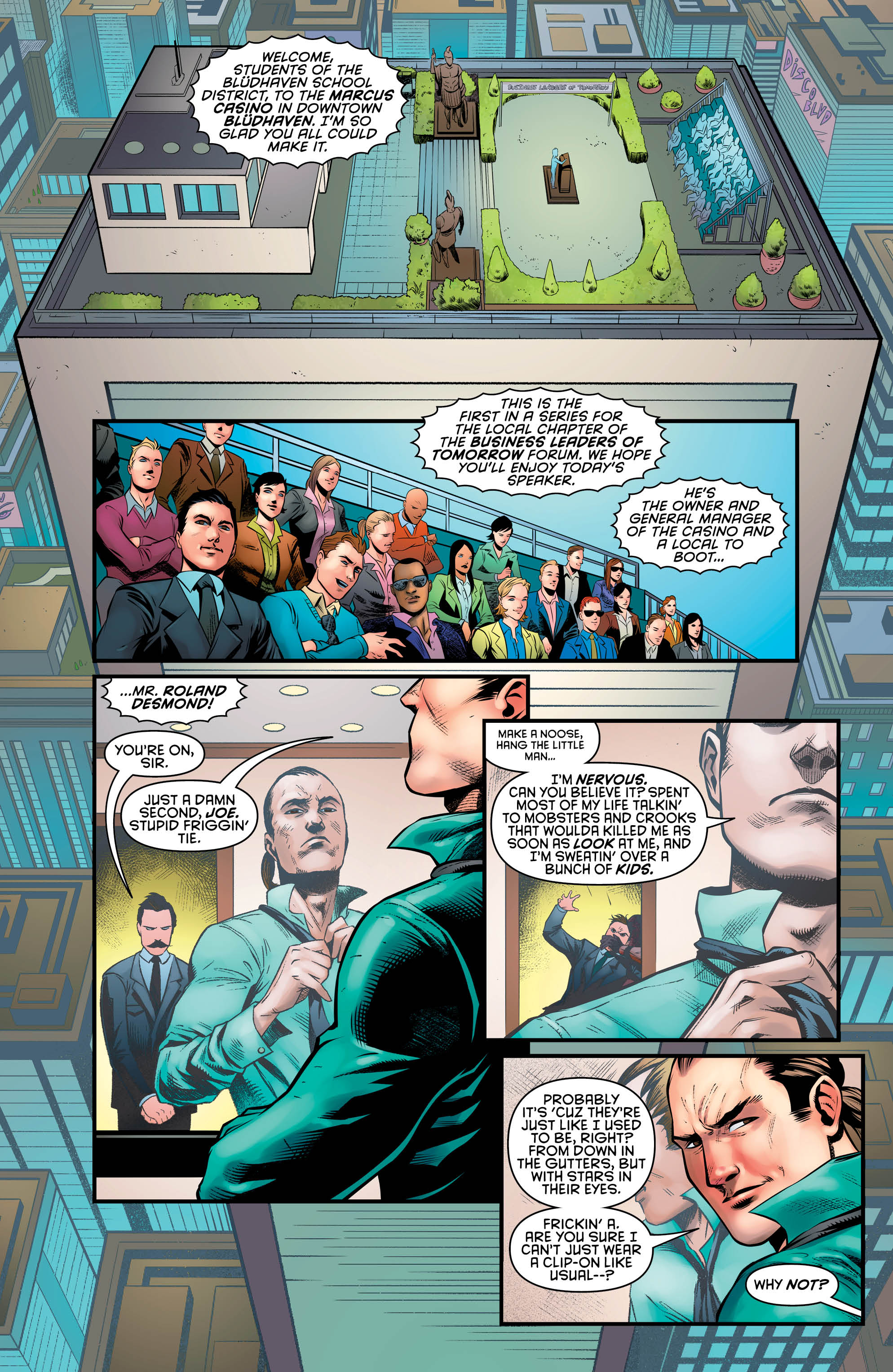 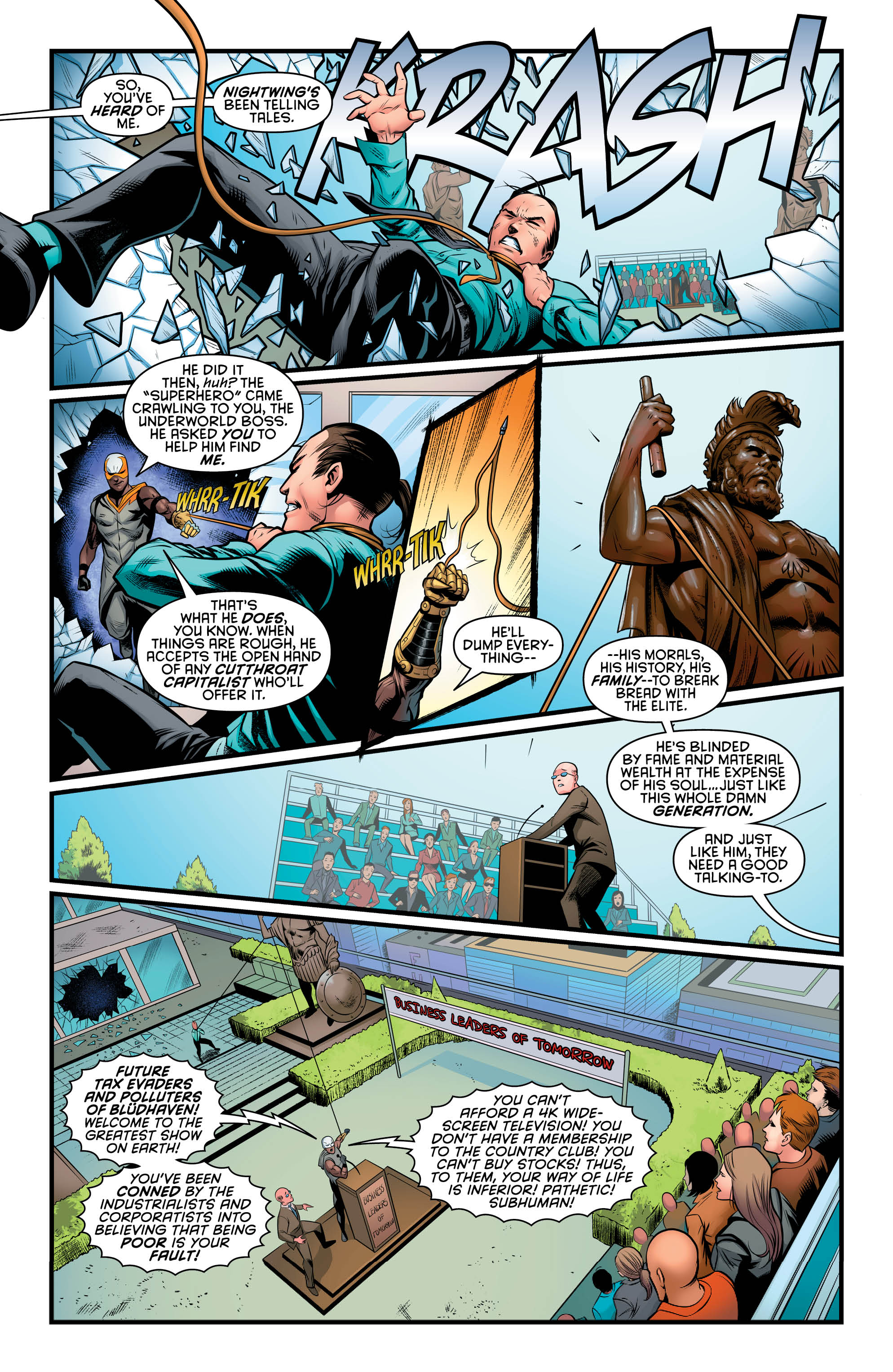 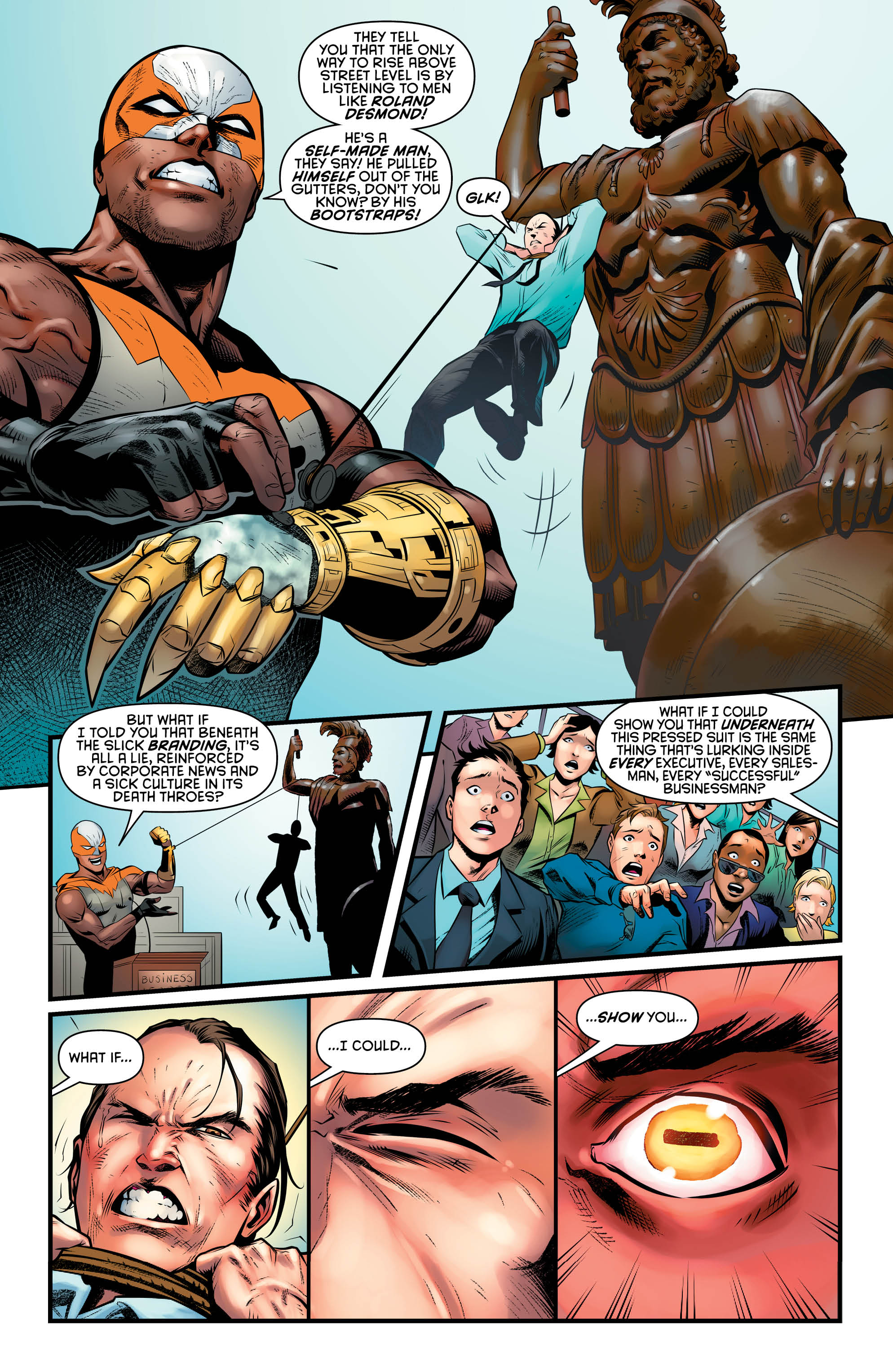 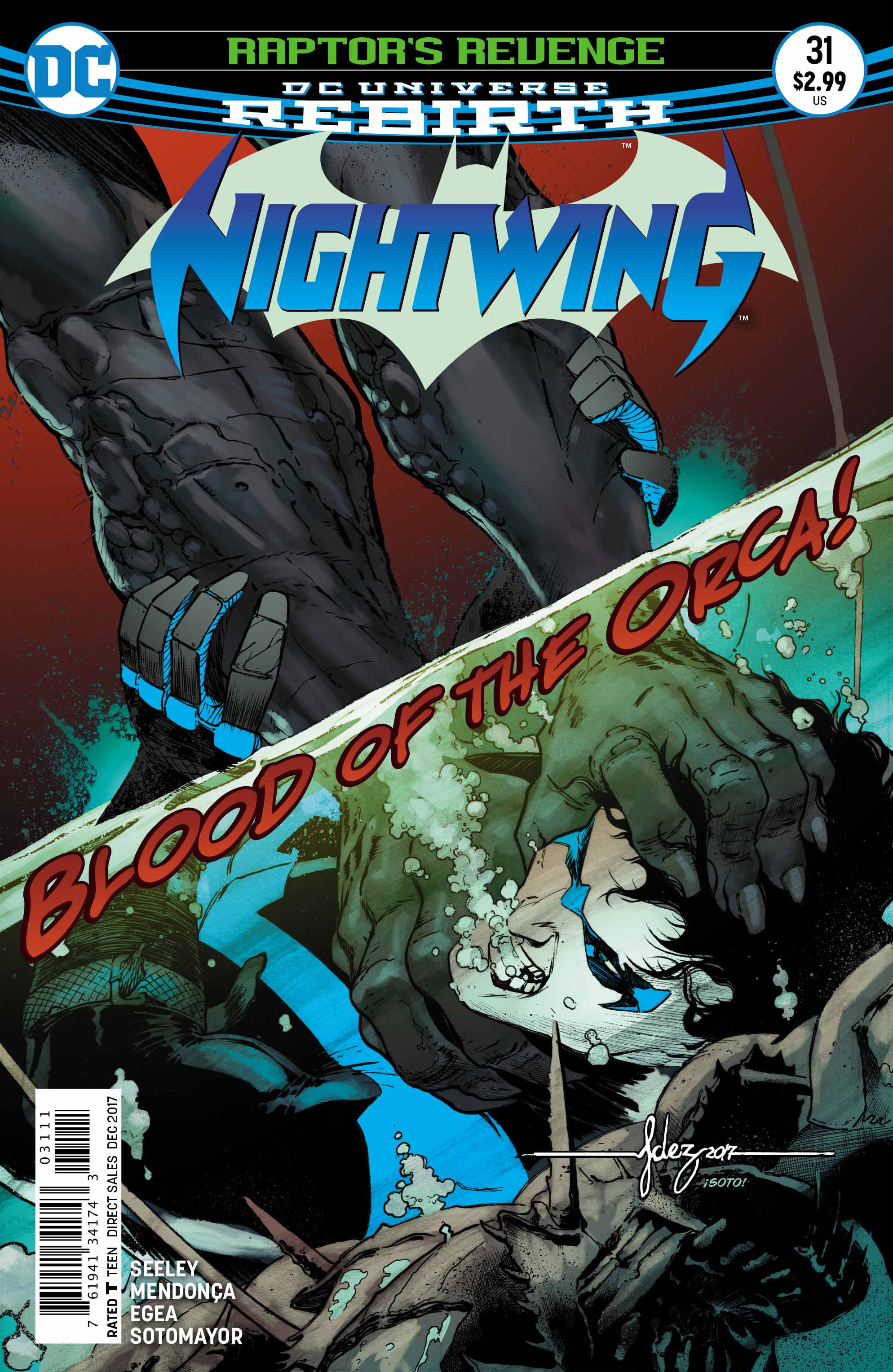 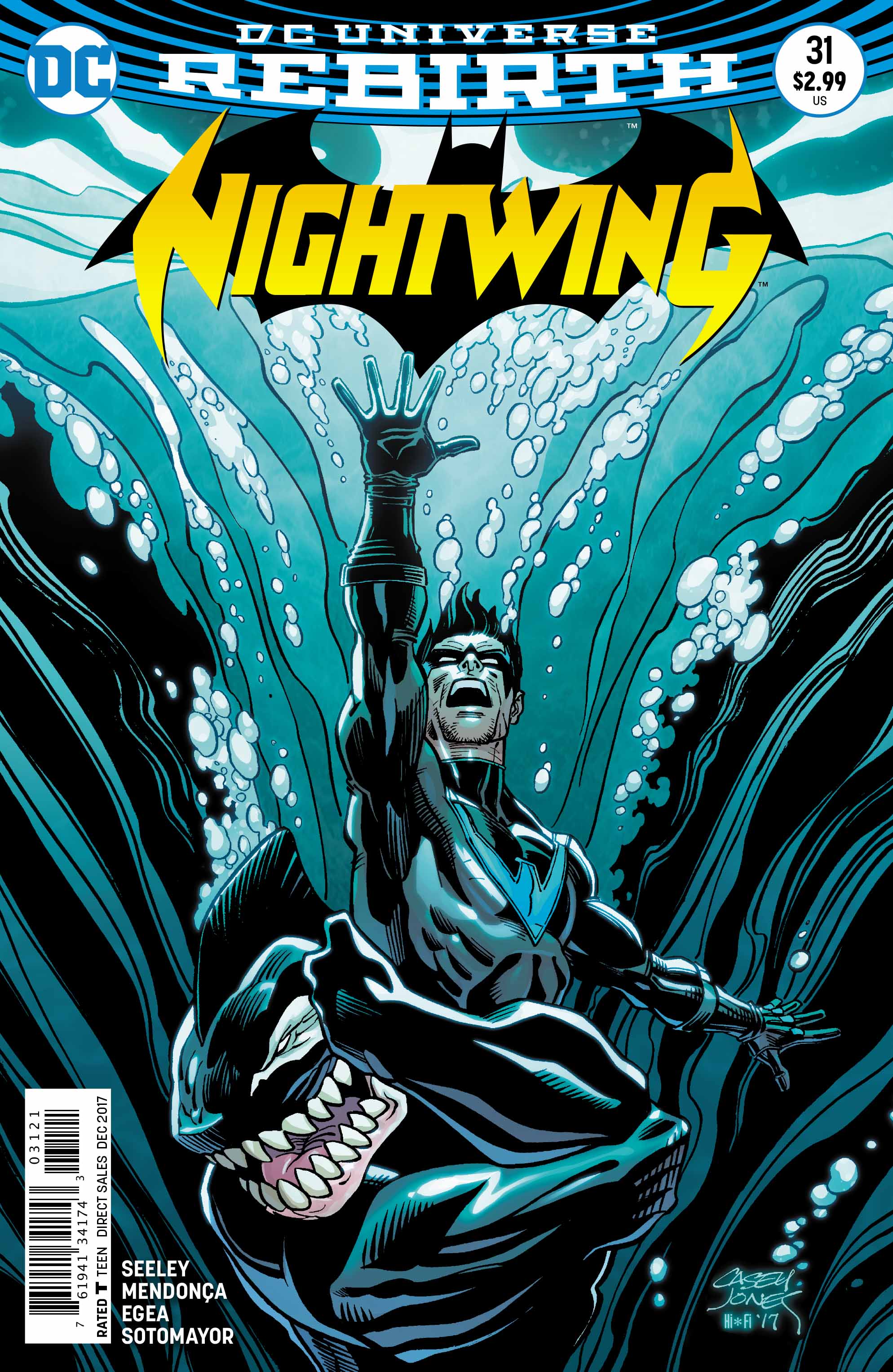 This is the main gripe I have with issue #31. The comic completely forgets about the ultimatum so much that it feels like Nightwing never made it in the first place. Consequently, the stakes never feel high and the story ultimately falls flat. Barely anything happens that affects the story significantly. I can only think of one game-changing story event.

However, this one’s quite a shocker.

Shawn Tsang, leader of the Run-Offs and Nightwing’s old flame, uncovers a shocking discovery. She discovers that one of her own, Pigeon, is working with Raptor!

While the plot was honestly very disappointing, one thing that still captivates me with every issue is Tim Seeley’s writing. Which is made even more impressive considering he’s been the series writer since issue #1 and not to mention the popular Grayson series. My friend and former Nightwing reviewer, Tyler, spoke highly of Tim Seeley’s writing and praised him for making the series so fun to read. I always enjoy reading Nightwing’s internal monologues and his interactions with Huntress were, at times, quite hilarious. Tim Seeley has consistently proven he can faithfully realise this iconic character.

Although I adored Tim Seeley’s writing; the real winner here is the artwork. The artwork has improved phenomenally since the previous story arc! This is all thanks to the combined talents of Miguel Mendonca, Chris Sotomayor and Diana Egea. I’ve said this before and I’ll say it again, Nightwing and Huntress are the best drawn, coloured and inked characters in the whole comic. Miguel Mendonca has brilliantly captured the distinct athleticism of these characters. Watching Nightwing perform his acrobatic manoeuvres and land in his poses are always a sight to behold. The colouring amazingly breathed life into the characters. This is the best the artwork has been in the series yet.

The excellent artwork and Tim Seeley’s writing more than made up for the disappointing plot. I really hope in the next issue we finally learn Raptor’s motivations.