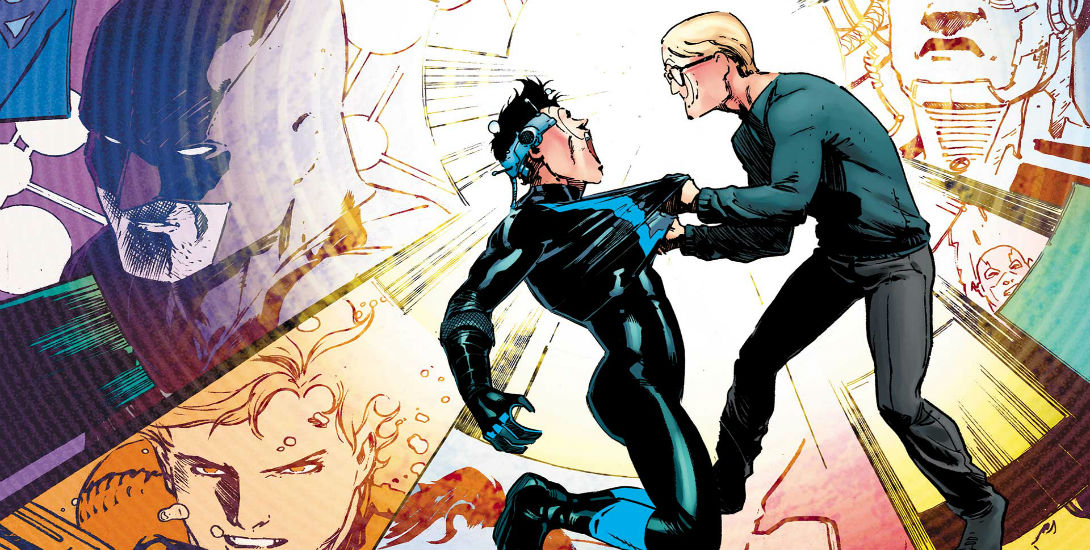 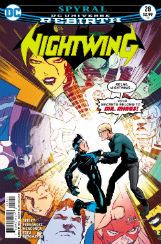 Well… that was unexpected. For a Nightwing newcomer like myself this issue went down a completely unexpected road.

Nightwing #28 starts off immediately where it’s predecessor finished- with our young hero encountering two Tigers. Yes, two Tigers. Nightwing is immediately, and visibly shocked by who- or what- is standing before me. It’s soon revealed that the second Tiger is actually the digital supervillian- Mister Minos. Mister Minos can somewhat be described as an A.I which has taken the form of Tiger via solid holograms. It’s also revealed that Mister Minos is the main mastermind and he’s been manipulating the Spyral agents the whole time.Mister Minos proceeds to ensnare Nightwing and extract his memories in order to learn his and his fellow superhero comrades’ identities. Including Batman.

Fortunately, with help from Huntress and the real Tiger, Nightwing was able to defeat Mister Minos and stop him before he learns any secret identities. The A.I’s solid, holographic construct gradually dissolves into a cybernetic skeleton and ultimately, nothing. With Mister Minos gone and the Spyral learning of his manipulation, Nightwing and Huntress return to Bludhaven together. Emphasis on the together.

Meanwhile, one of the members of Run-Off, Mouse, has gone rogue and is now trying to kill the person behind her friend Giz’s death.

However just as Blockbuster transforms, Run-Offs member Shawn Tsang intervenes and rescues her friend just in time. Shawn brings Mouse back to join the rest of the Run-Offs to mourn their fallen friend together. 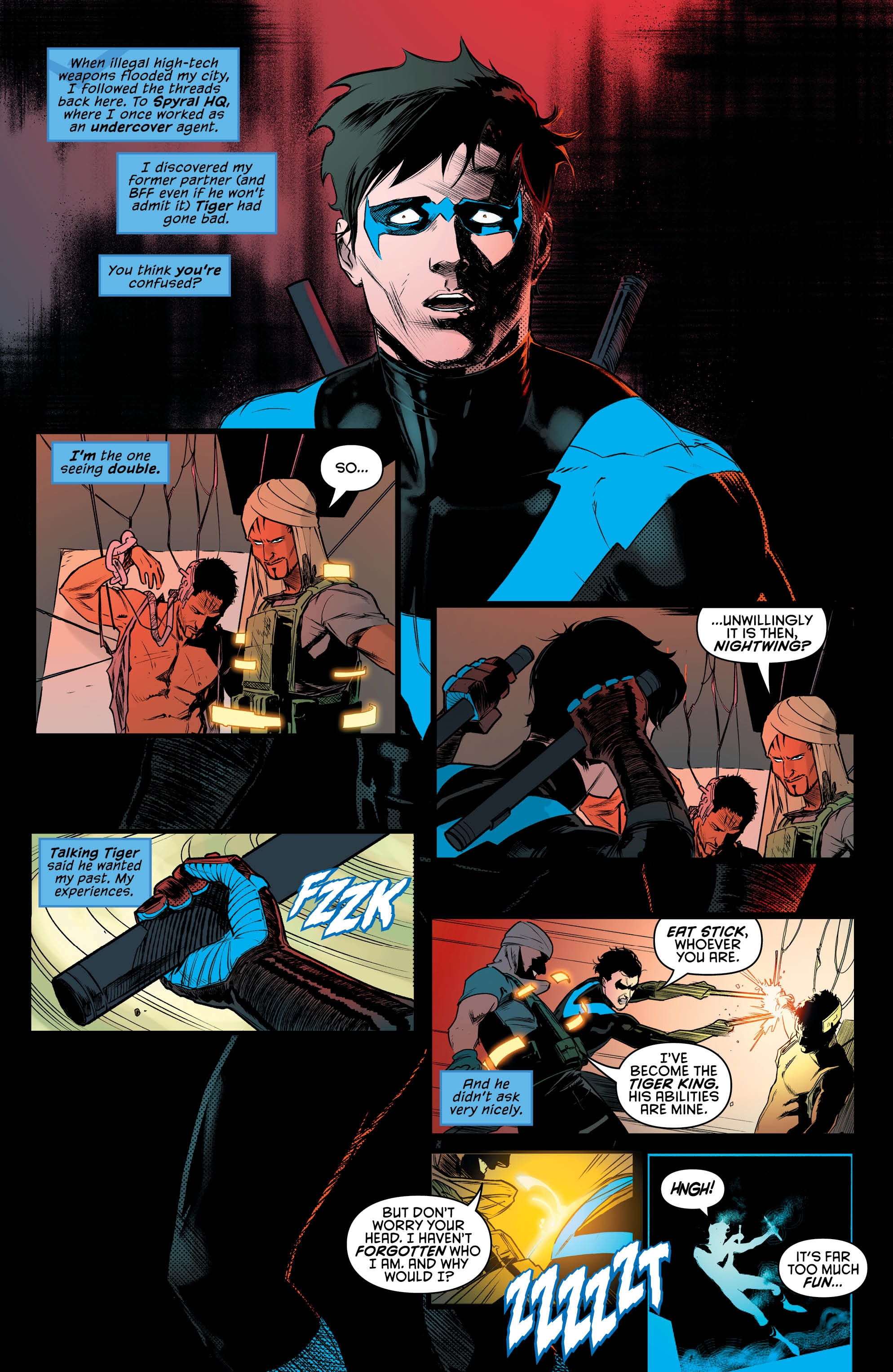 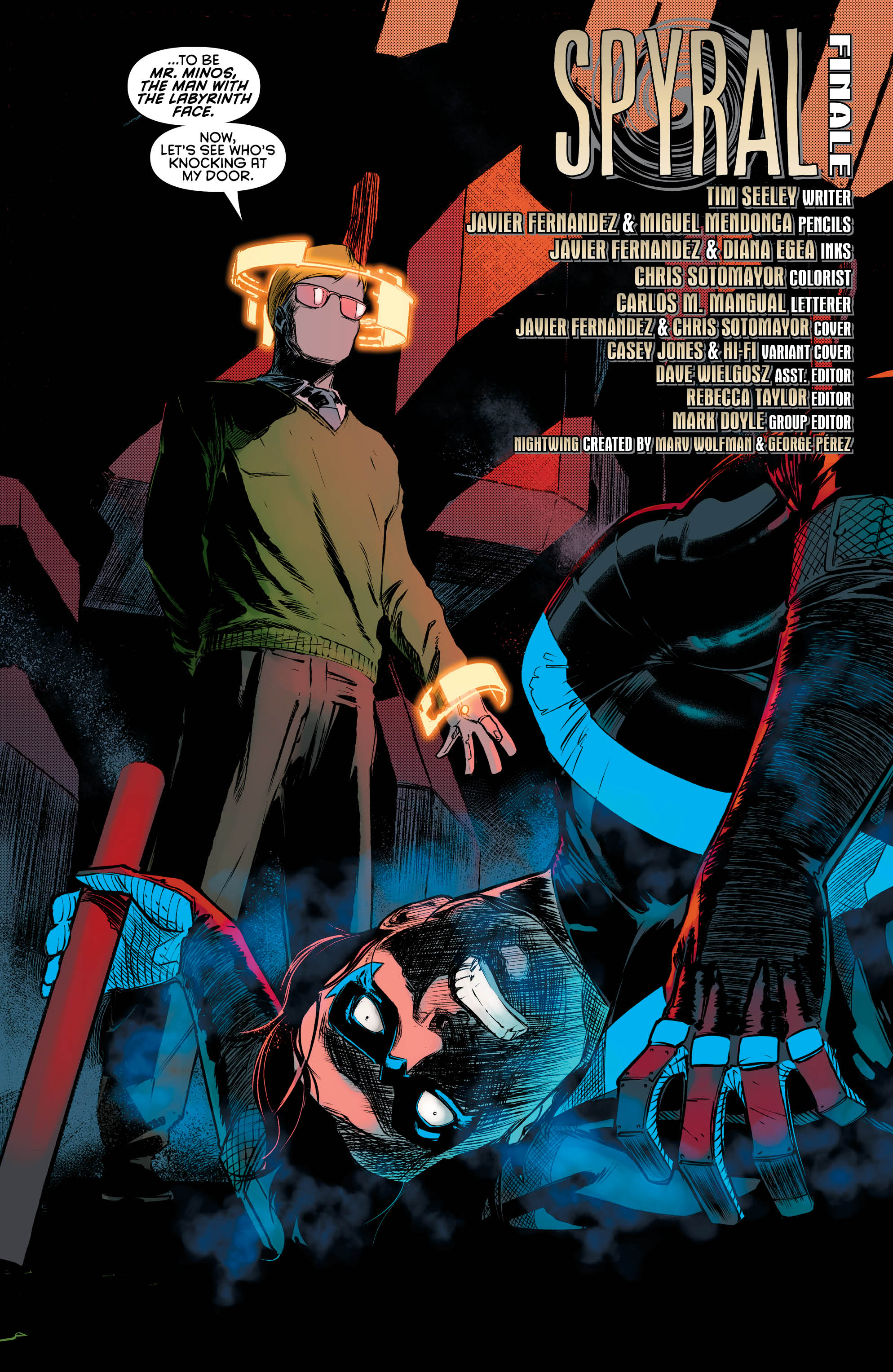 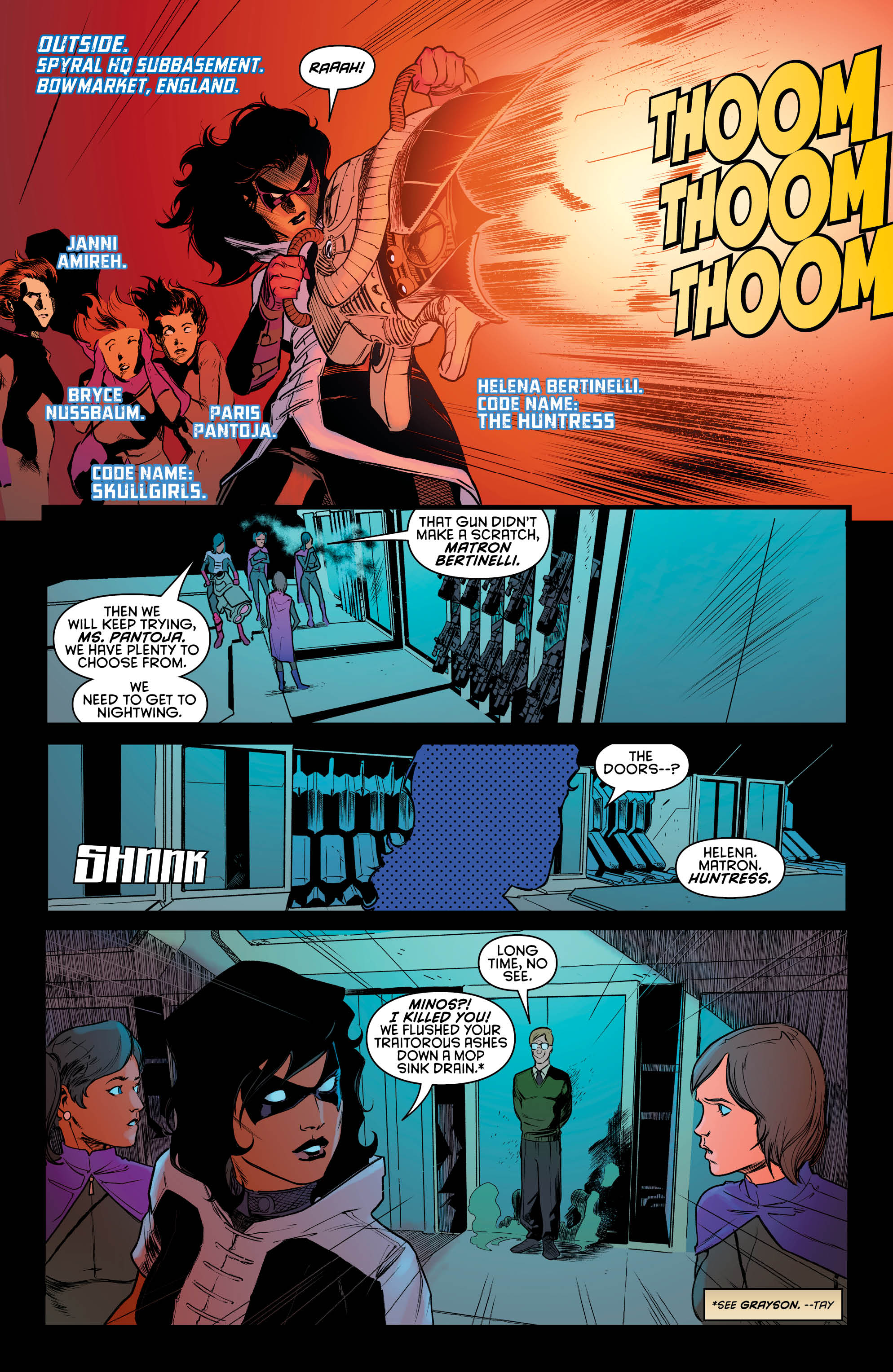 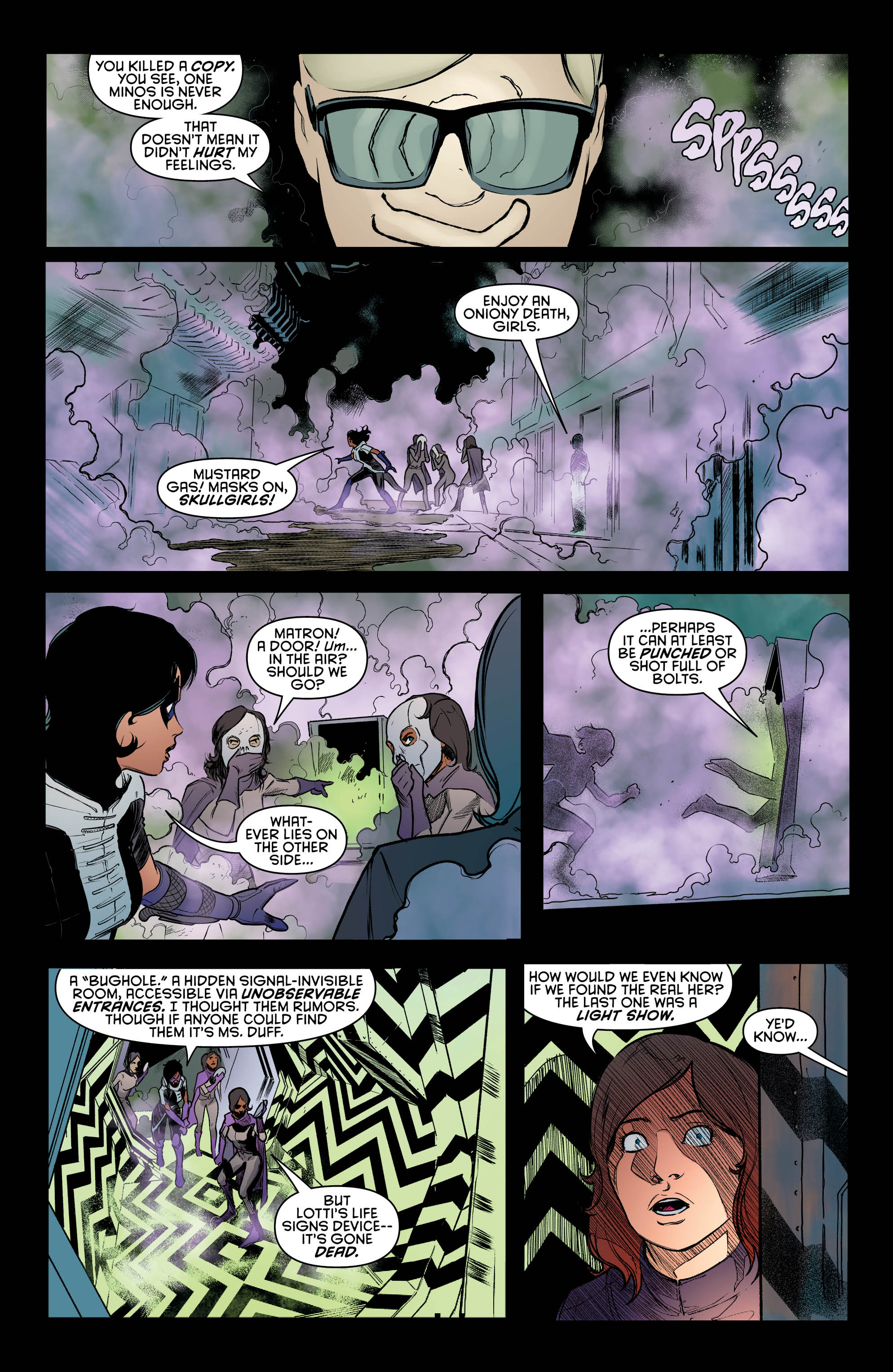 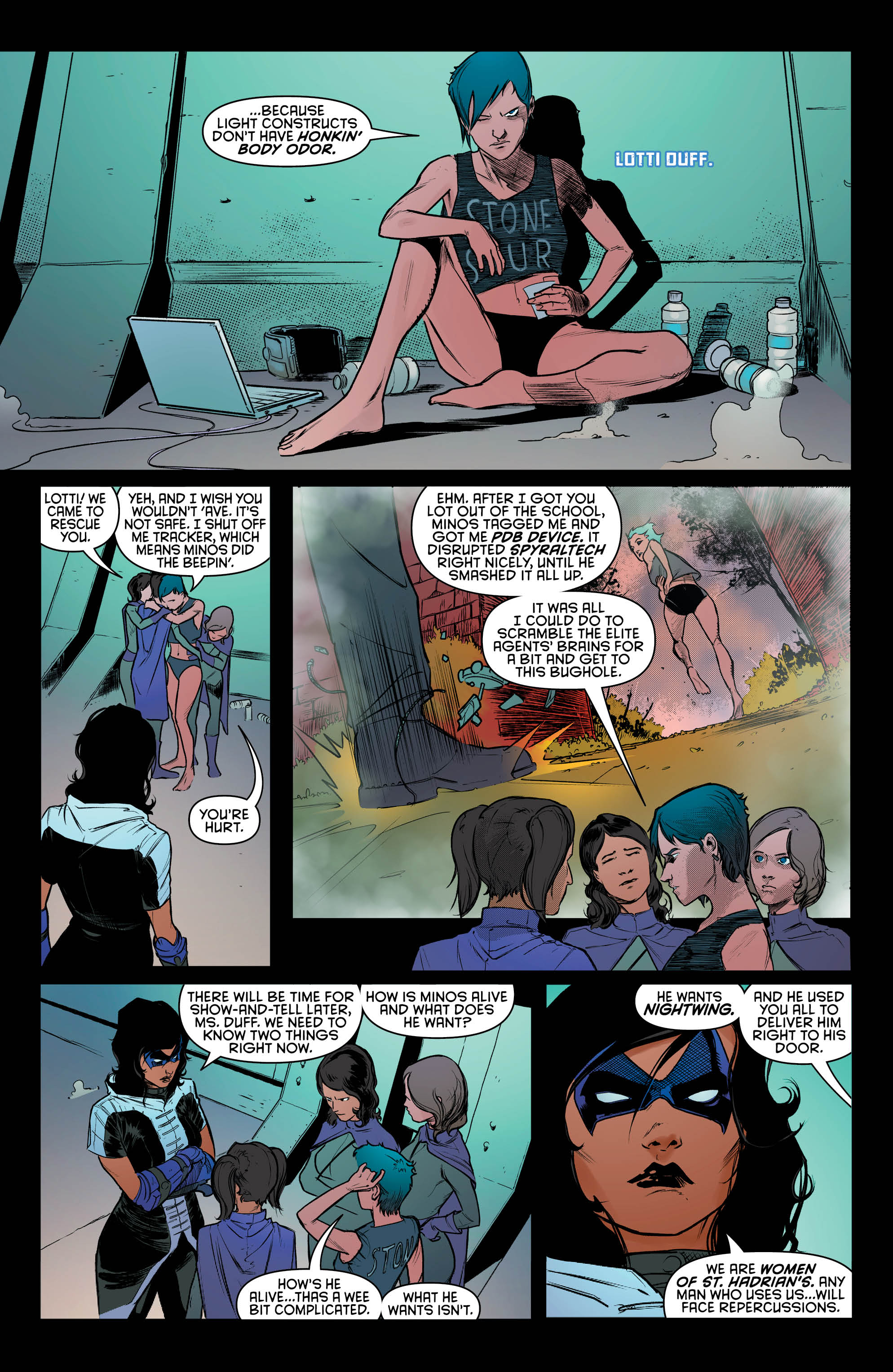 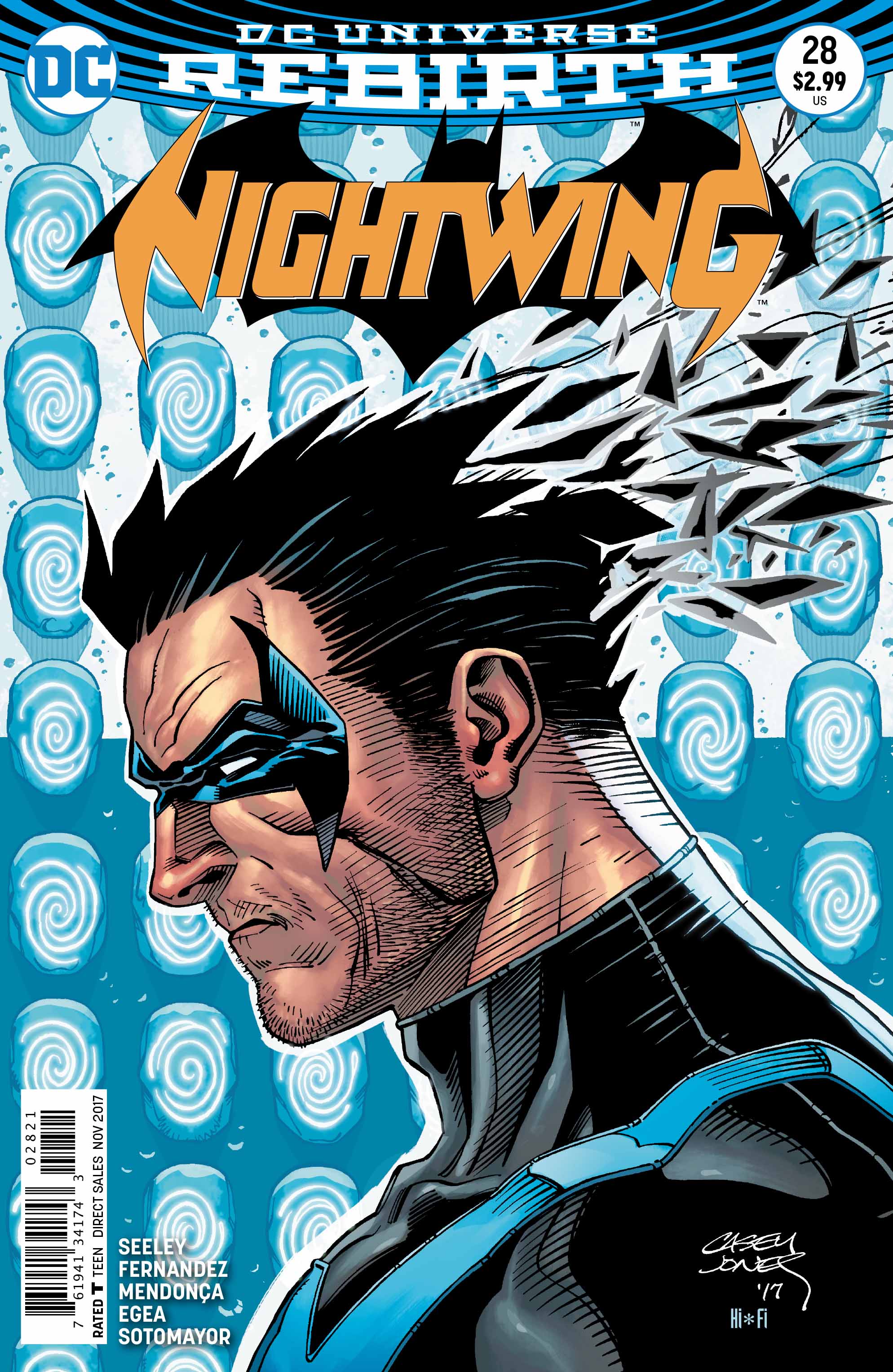 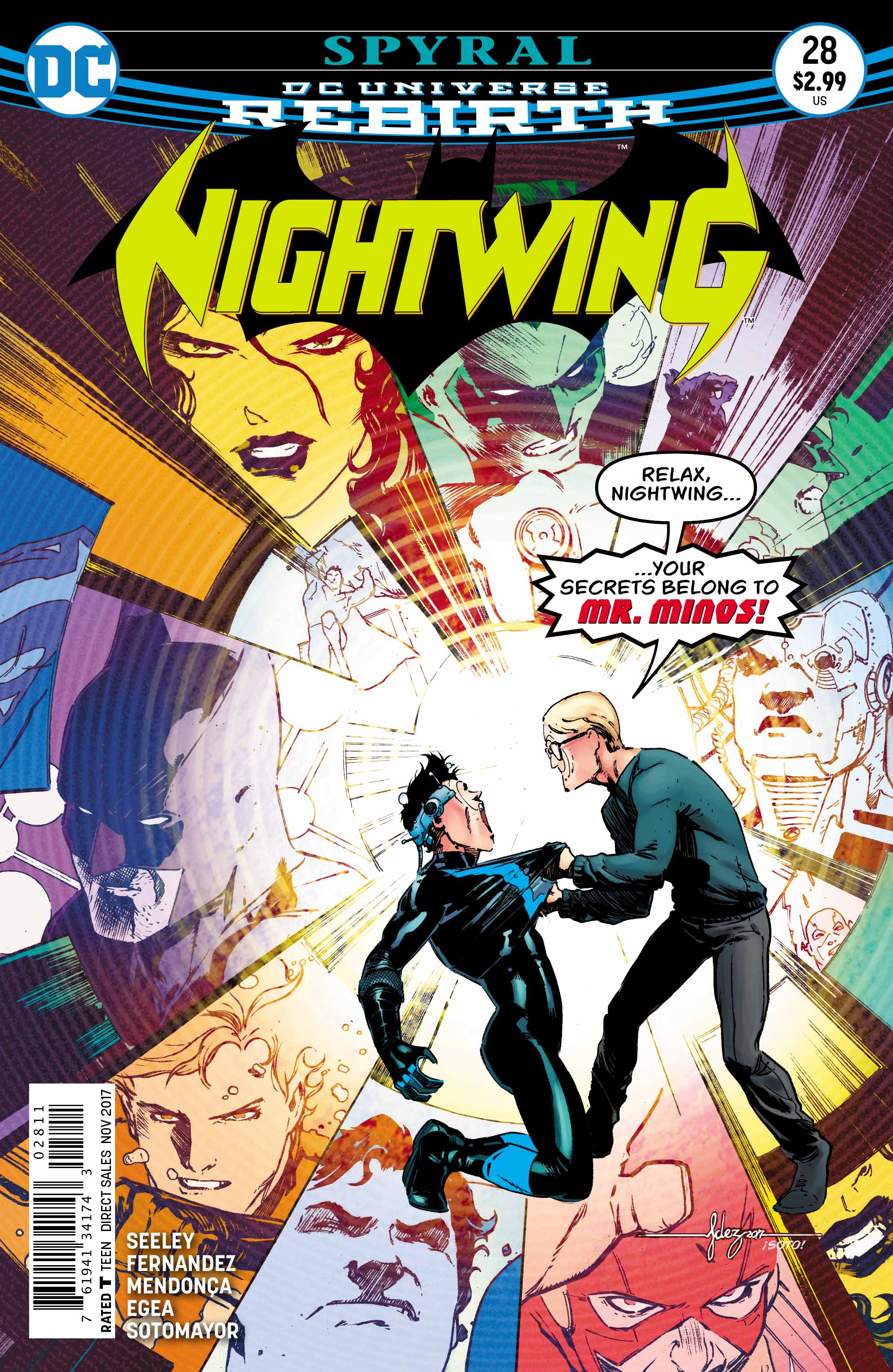 MISTER MEH AND THE STORY

I found the weakest aspect of issue #28 was Mister Minos himself. His motivations were dull and it felt like he was just thrown in because the story needed a villain. Also, since he’s featured so very little throughout the comic it made his ‘demise’ lacking the emotional impact the comic obviously sought for.

As I’m still very much a newcomer to the Nightwing series I found the story to be, at times, hard to follow. I highly recommend reading a few previous issues to grasp the story and characters. Despite that, I actually found issue #28 to be easier to understand than it’s predecessor. I commend Tim Seeley for providing some well needed context to Spyral and Nightwing and Huntress’s connection to the elusive spy group.

Speaking of the artwork, I’m really digging it. At times I found it simply stunning. Artist duo Javier Fernandez & Miguel Mendonca have both done a brilliant job in translating the emotions of Tim Seeley’s writing onto page and portraying it on the characters’ faces. The whole series looks and feels like it has it’s own identity. The artwork was elevated even further thanks to Chris Sotomayor fantastic coloring.

Despite the less than stellar shoehorned villain, Nightwing #28 still offers a solid amount of action, great dialogue and wonderful artwork. Tim Seeley has proven once again that he knows how to write the beloved eponymous character.