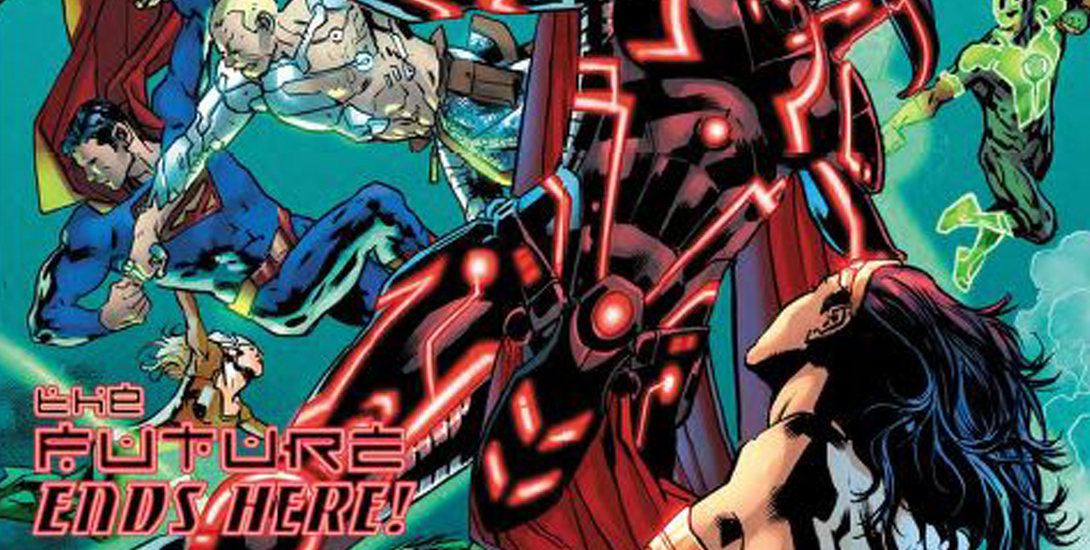 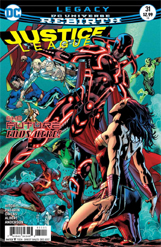 In this issue, the Justice League and their future children must face off against The Darkness in order to change the horrific future they will all face. With the League under the control of The Darkness, it appears that all is lost.

This is Bryan Hitch’s final issue on this run of Justice League. He has an amazing track record and is one of today’s best creators. His writing and art is up there with the best talent in the business. I look forward to his future projects and will pick up whatever comes next.

However, this last issue of “Legacy” is a total trainwreck.

There are so many concepts being thrown around, so many loose ends are being tied up and the forced neat little bow at the end with the League standing around as a group while saying farewell to the camera as it pans away from Hitch’s last shot is just unsatisfying.

This issue is a jumbled mess and it finishes by basically saying none of it mattered:

“Everything we fought for, everything we sacrificed… none of that will matter. Except if it does later, maybe. If it needs to at some point…. but it might not. We don’t know”

This is one of the worst issues of Justice League I have read in a long time and I have been reading since the “Detroit” days.

I’m not bashing this for the sake of it, I can point out flaws throughout this issue starting with the convenience that EVERY Leaguer is paired up vs their kid? Not a single one mixes it up? Batman is left open though, no kid for him. That leaves him free to drop in with the weapon that will take out Superman.

Honestly, can we get past this thing where Superman is constantly being taken out by Batman once every few months? Can we reverse that once in a while and have Superman take him down? Elevating Batman in this way is cool, but doing it all the time comes at a great cost to the DCU. It makes Superman look weak. Taking out the Man of Steel needs to be an ‘OMG’ moment, but now it’s just a Tuesday. It is so overdone at this point it’s not even fun to see anymore. 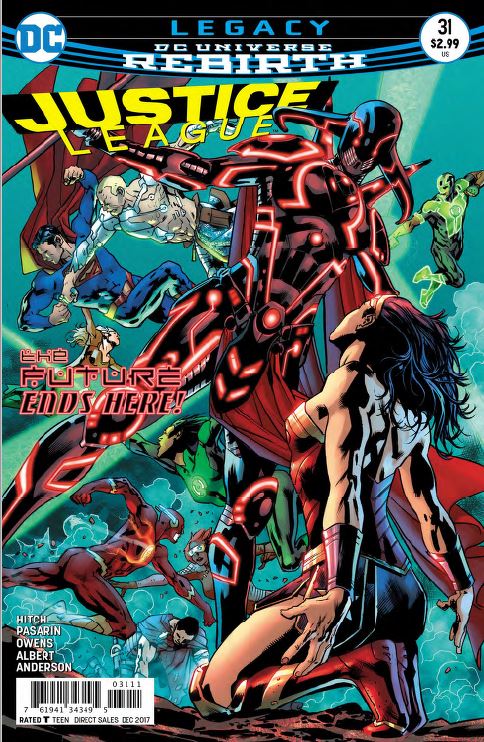 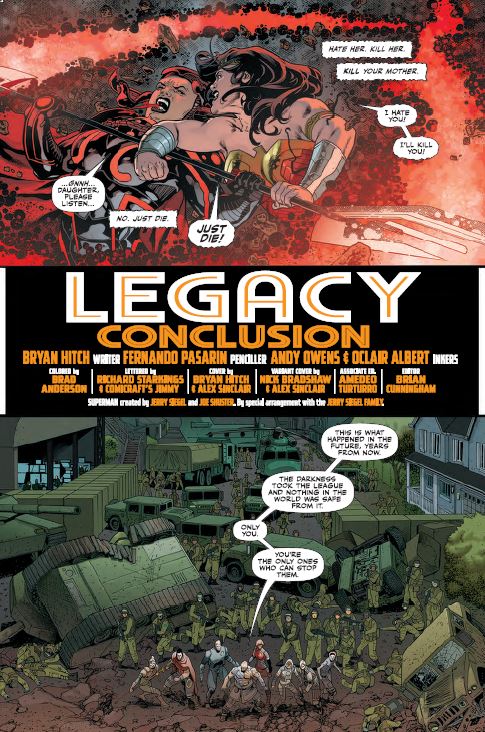 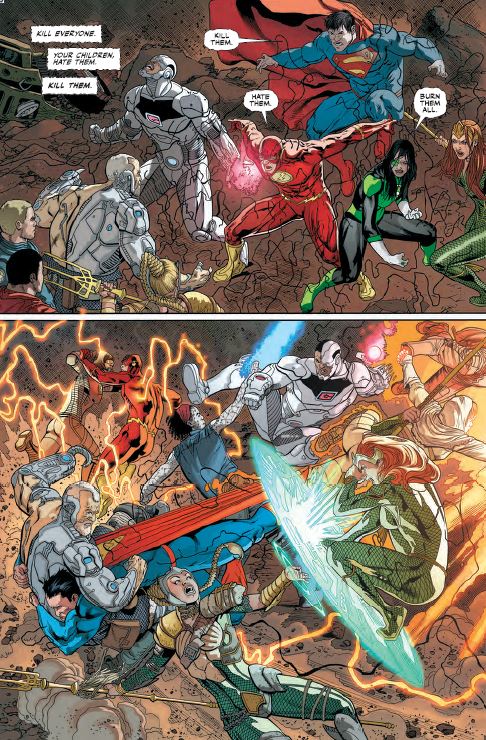 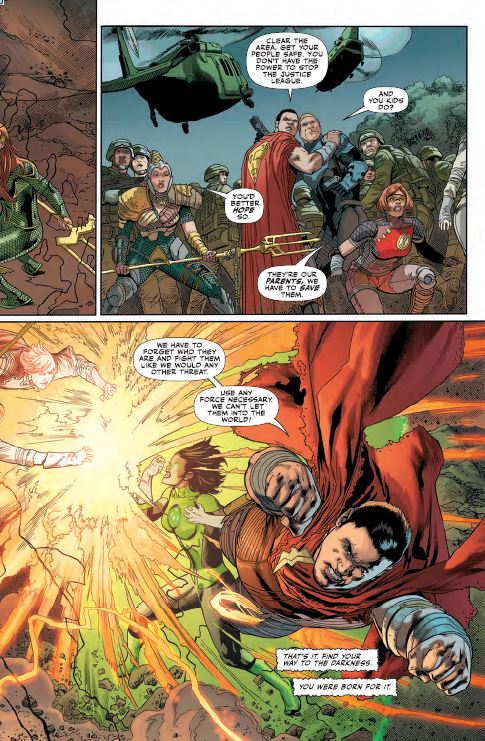 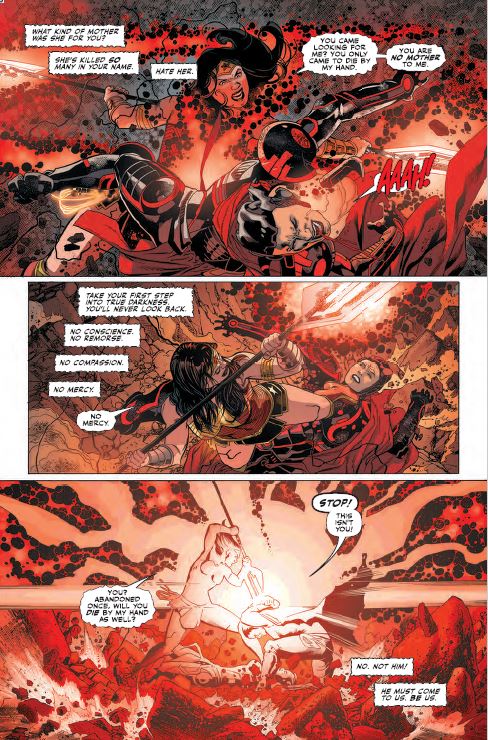 Fernando Pasarin does his best to make this story work. He is asked to juggle a lot in this issue and he does his part. This issue shows some of his best work and the battle scenes really do look amazing. He does his best to pull it all together, however even his pencils can’t save this story, but I have to give Pasarin full credit for his work here.

This is one of the worst time travel stories I have read. The conclusion is lazy, sloppy and serves nothing. These characters from the future were dull and couldn’t stand outside the basic concept so they ended up just being bland and uninteresting.

A terrible final issue from a creator who is better than this. “Legacy” had the makings of a fantastic story but in the end it feels like Bryan Hitch thought of the name and said to himself :

“That is a great name for my final arc, Legacy… now, how do I make it work?”