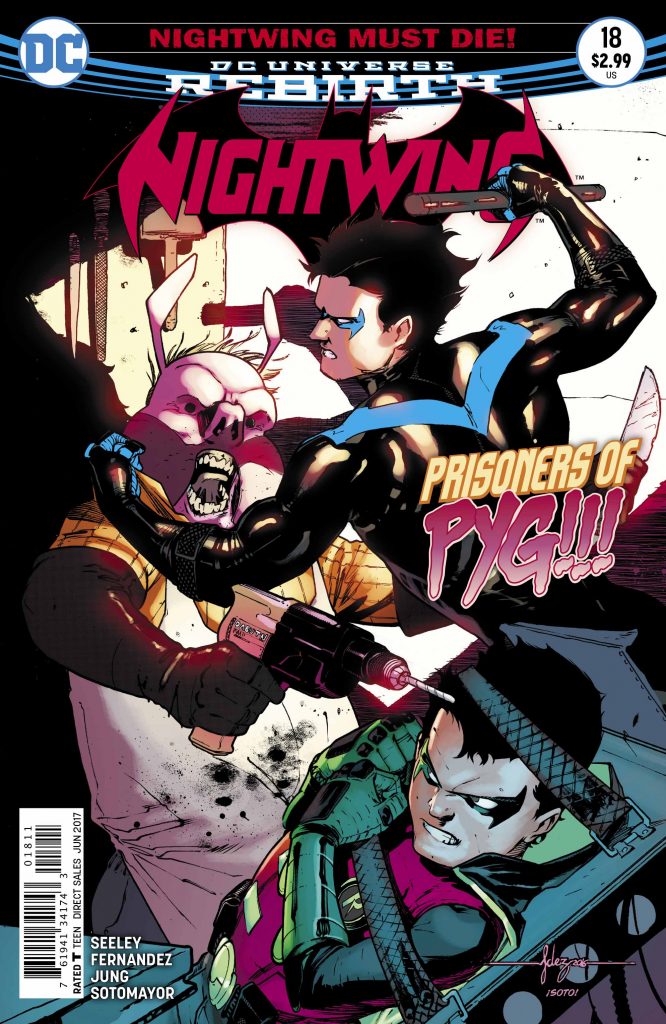 Major Spoilers – and history lesson – ahead

Tim Seeley – you’ve done it again. You’ve surprised and excited me. Allow me to explain. This current arc – entitled “Nightwing Must Die!” – is turning into what feels like an extension of the Grant Morrison Batman and Robin series which ran from 2009-2011, and I love it. So the inclusion of Professor Pyg in this current arc got me excited, considering he was created by Grant Morrison and featured in this Batman and Robin series. During this run, we saw Pyg appear in an arc entitled “Batman and Robin Must Die!” where he was working with another villain – Doctor Simon Hurt. Many fans may remember Hurt as the man who shot Dick in the back of the head to get Damian to work with him.If you’re following where this is going, I salute you.

Doctor Hurt had appeared prior to this arc, and made his unnamed debut in 1963’s Batman #156, but was revived by Morrison and became the main antagonist of all of his Batman titles from 2007 to 2011. This first unnamed appearance was in a two-part story entitled “Robin Dies at Dawn,” so you can imagine my surprise and excitement when I saw a stranger walk down an alley towards the Deathwing Dollotron, shoot Damian in the back of the head and utter those four words. All of this to say – I am mad at myself for not making these clever connections earlier! The title of the arc and the inclusion of Pyg and Damian should have been a dead giveaway! Simon Hurt is back! 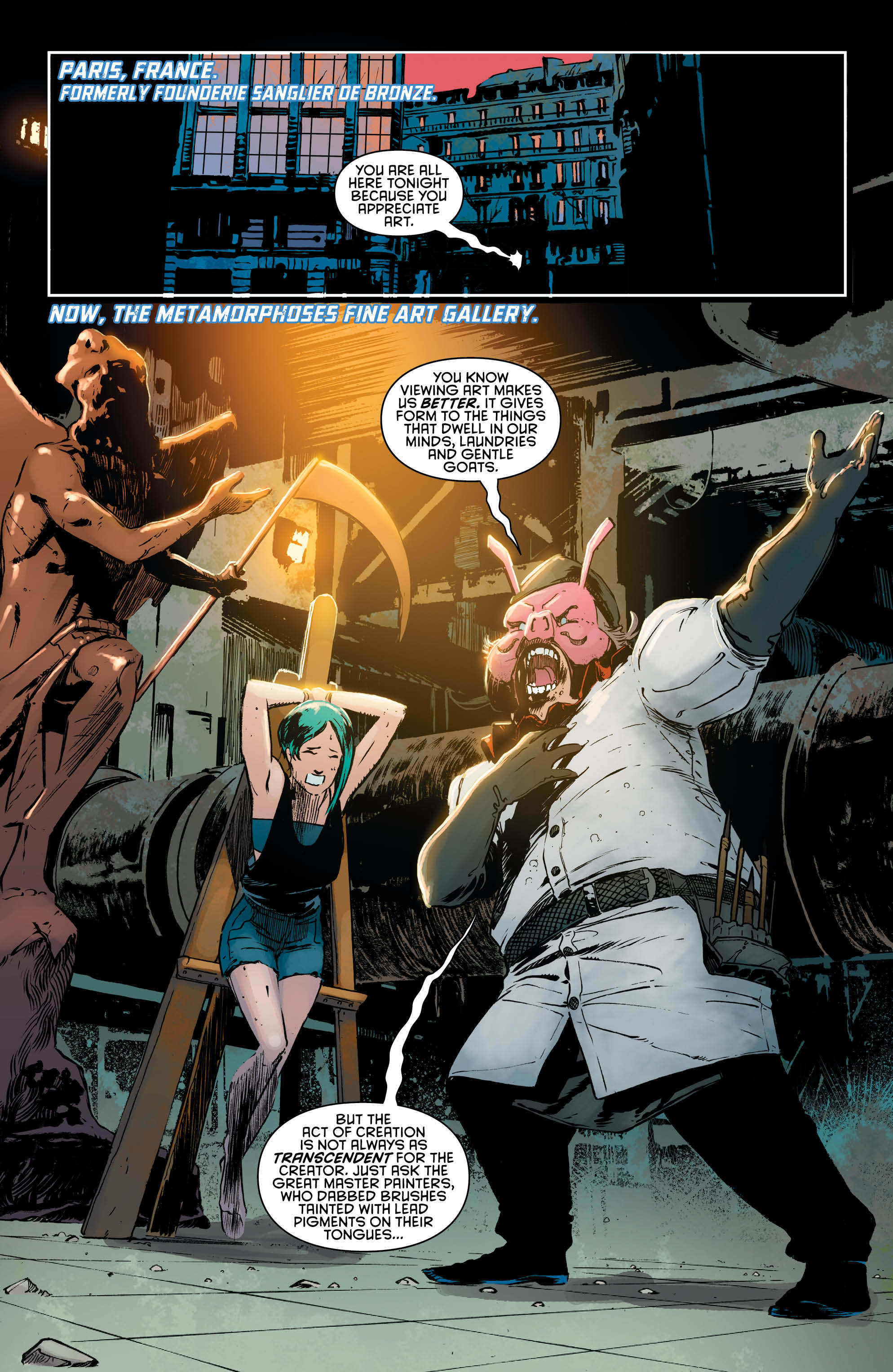 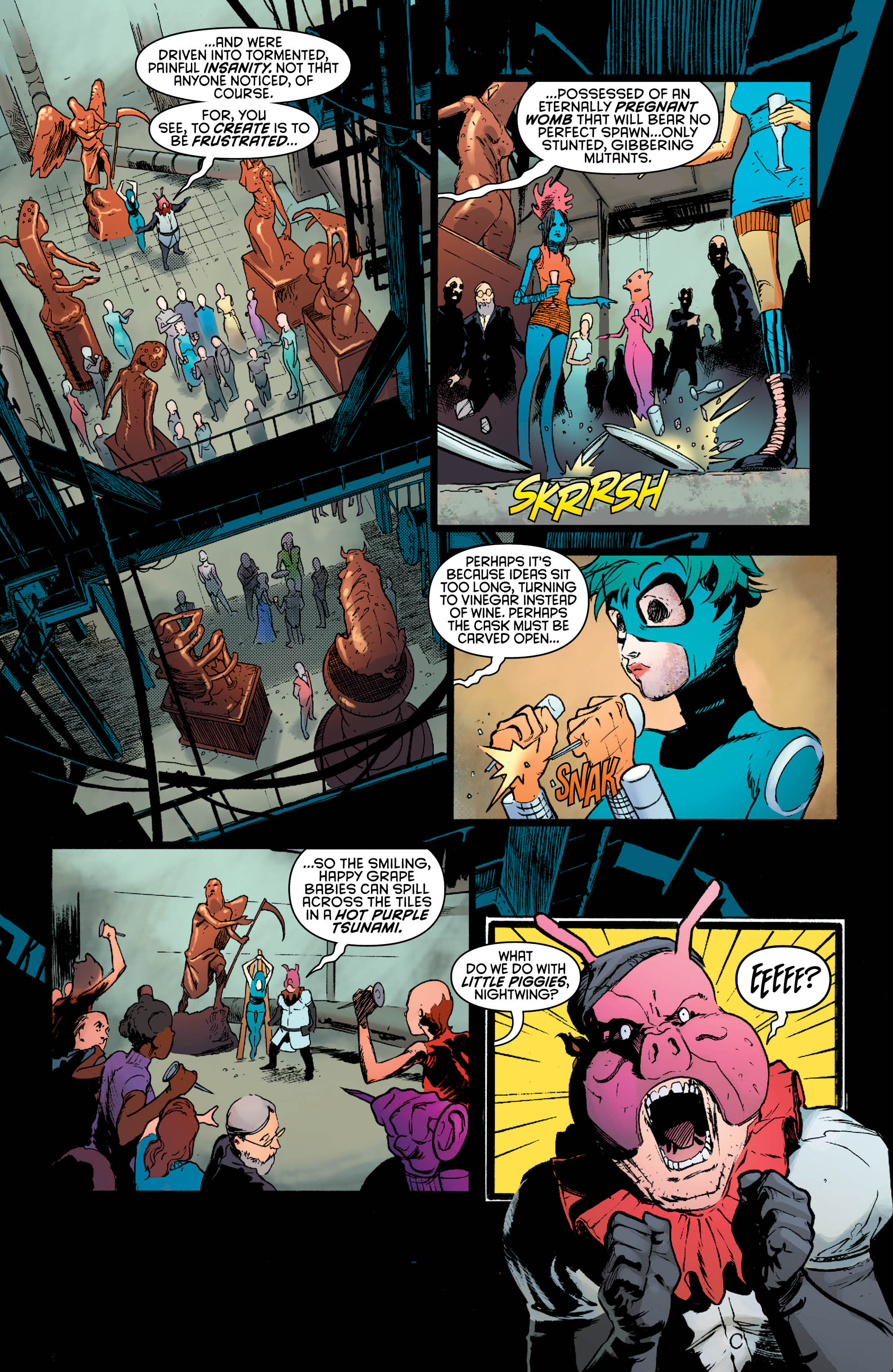 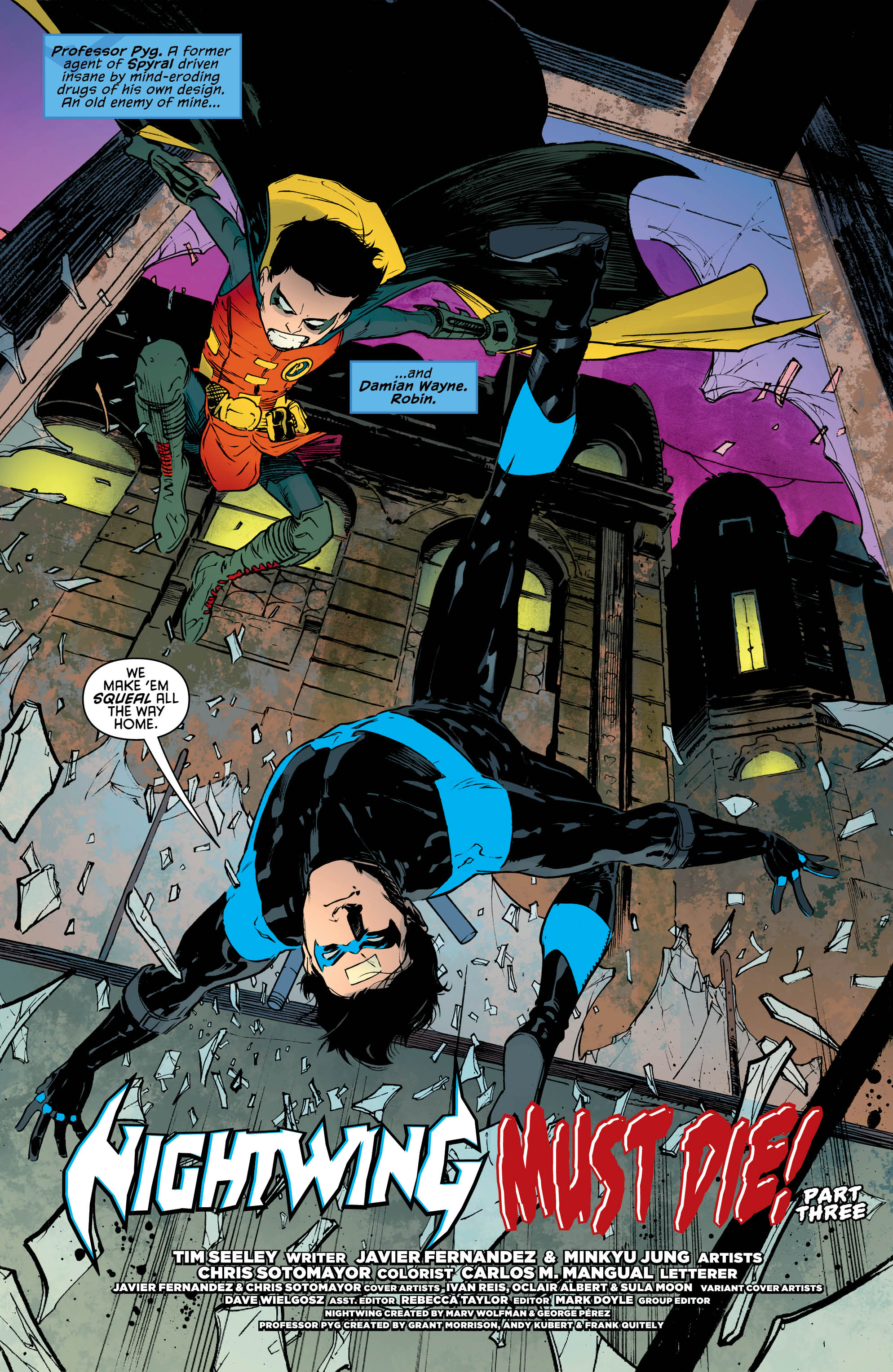 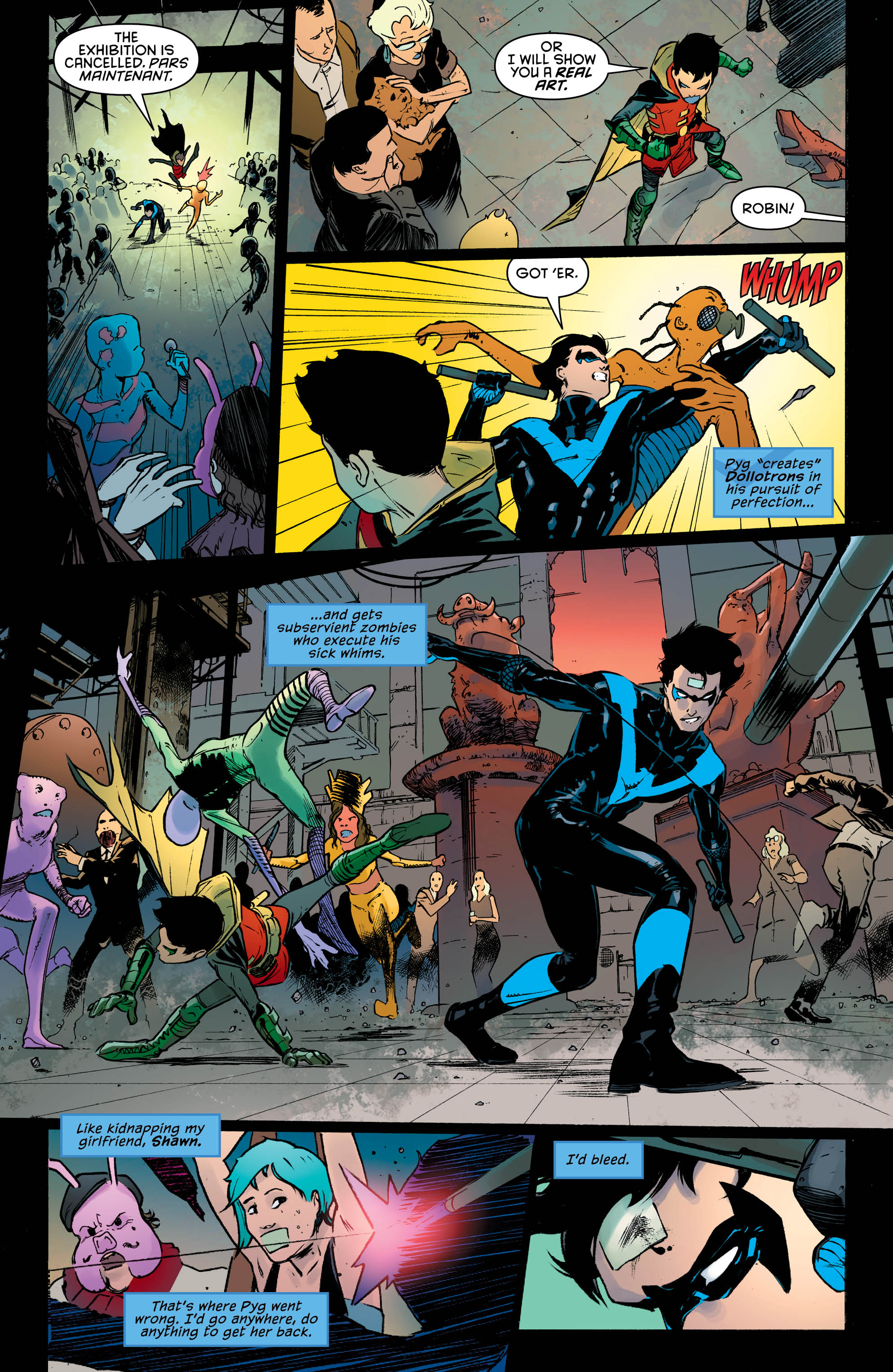 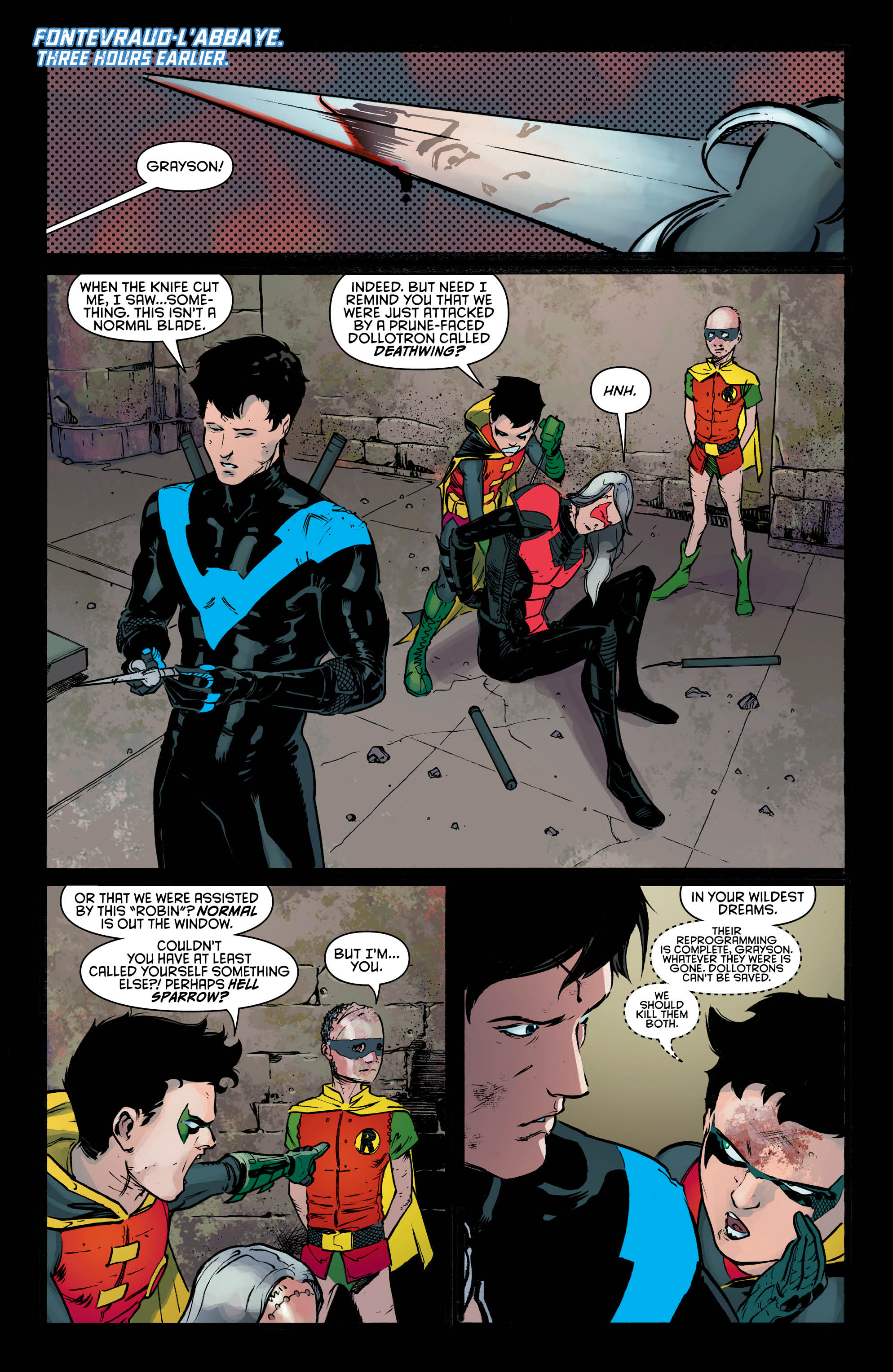 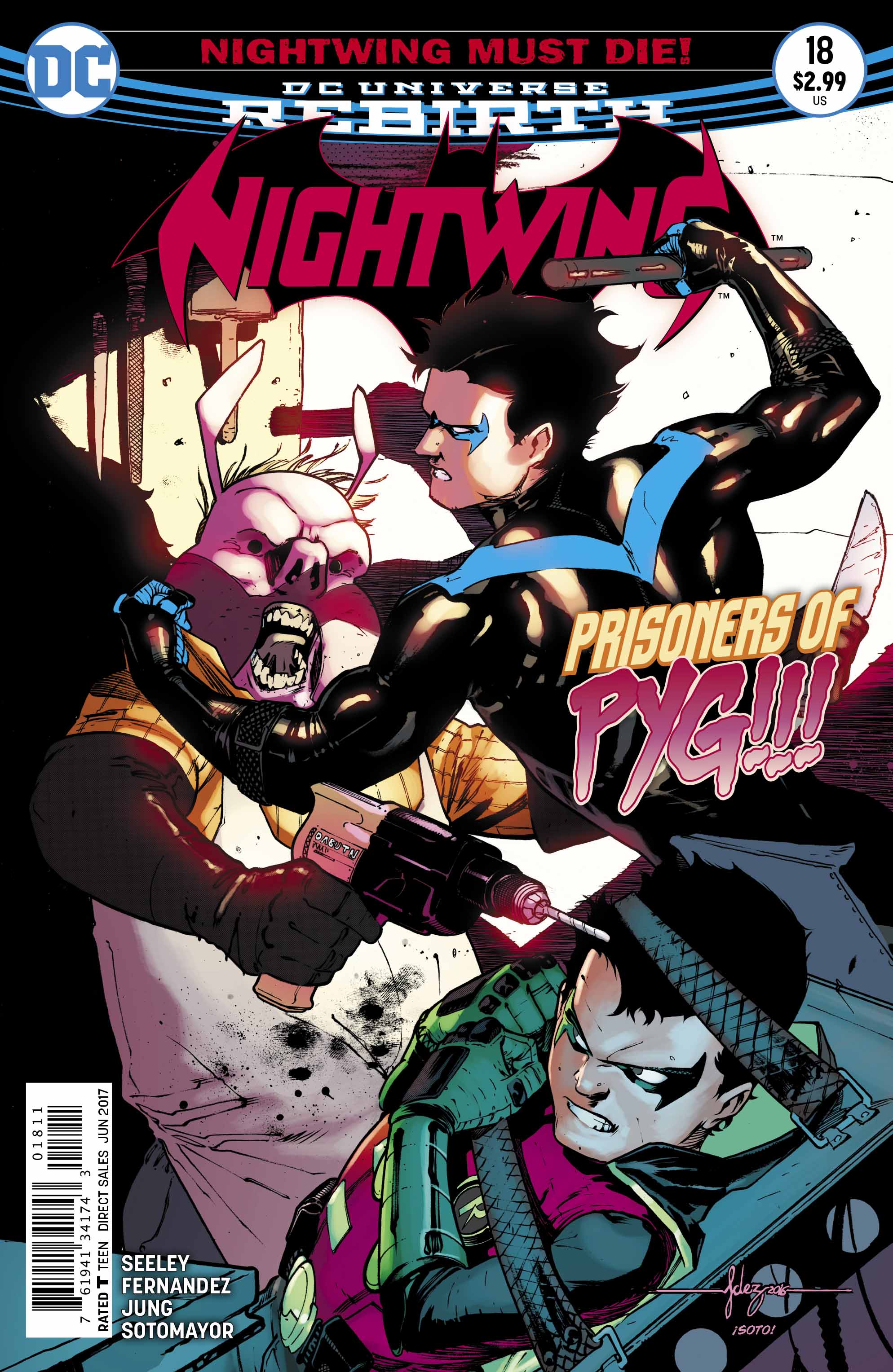 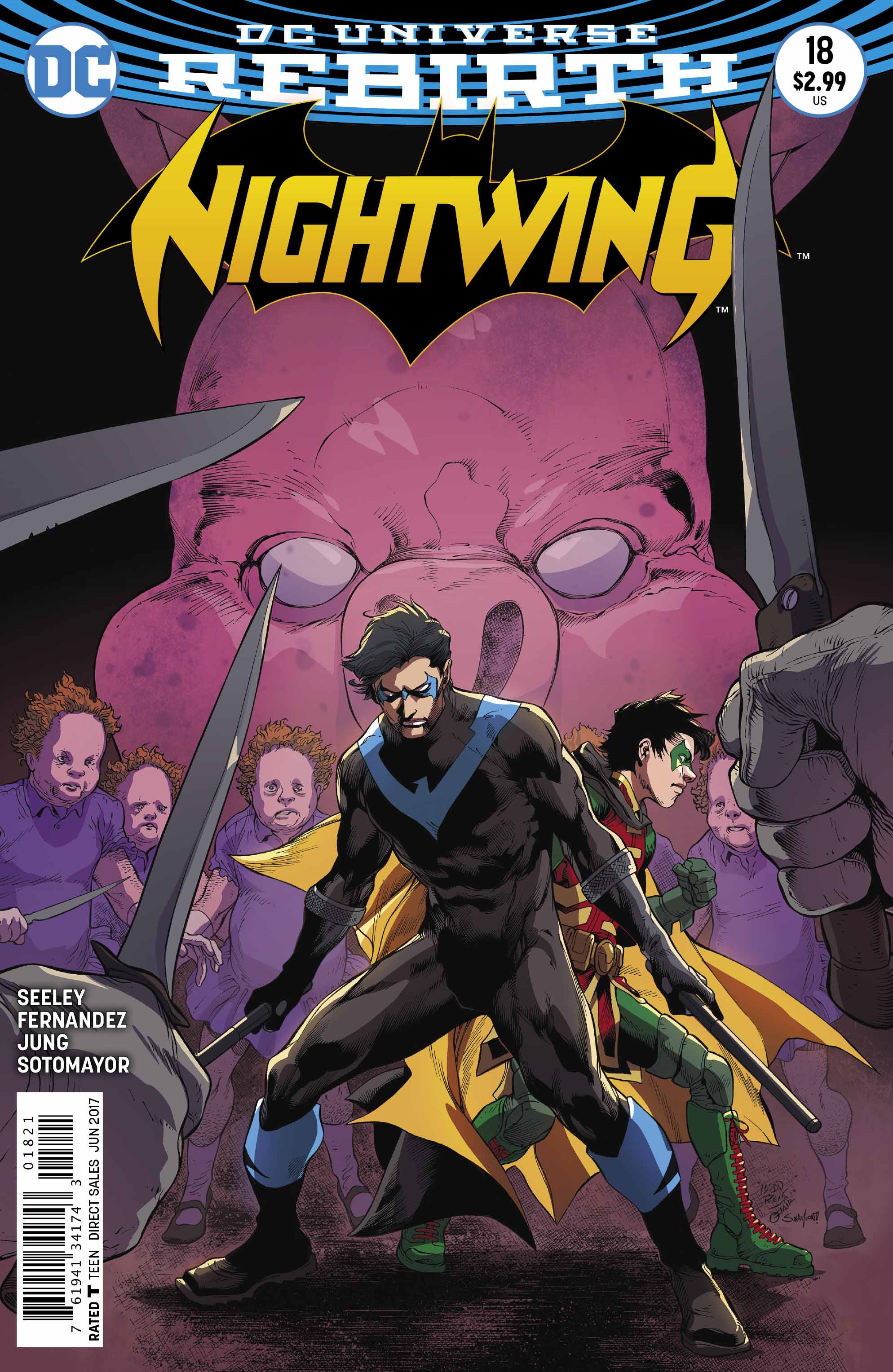 Now, with all of that history out of the way, let’s move onto the actual issue of Nightwing at hand. This issue saw Dick and Damian take down Pyg and rescue Shawn. We also saw (kind of) Deathwing kill the Dollotron Damian, which was pretty heartbreaking, I have to say. Damian got lured out into an alley way, where he was then taken out by a man who is revealed to be Dr. Simon Hurt, but you knew that already. Pyg revealed that he’s been working for Hurt, and honestly I’m just so mad I didn’t see this coming. Seeley has been crafting some wonderful stories for Dick over the course of this run, but this one is beginning to creep up on my love for the “Blüdhaven” arc. The respect to the work of the writers who came before him – but especially Grant Morrison – is incredible and honestly, I take my hat off to you, Tim Seeley. You’ve amazed me yet again.

Can I fault this issue in any way? No. No, I can’t. Not even if I tried my hardest. The art from Javier Fernandez and my ongoing favorite artist Minkyu Jung is as good as ever, as well as colors from Chris Sotomayor and letters from Carlos M. Mangual – what a team! Pyg; the Dollotrons; Simon Hurt – they all look terrifyingly… well, terrifying! It’s incredible. Also special mention to the wicked variant cover by Ivan Reis, Oclair Albert and Sula Moon – it looks insanely cool! Honestly, this issue – much like many of the ones before this – made me smile so much. The actual excitement I felt when I knew what was coming on the final page was unreal. All I do is sing praises for this series, and if you haven’t read it yet, firstly why are you reading this review? But also you should do yourself a favor and pick up this incredible book.

I feel as though you already know my conclusion. Get this book. Get all of this series. Wait for the trades, or collect them as they come. Do anything you can to read this book. I wish my excitement and love could come across even stronger on paper (“paper”), but it really can’t. Bless this creative team.