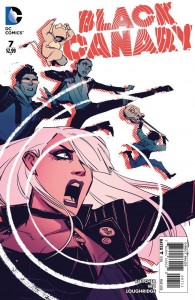 Whenever I read an issue of the new Black Canary series, I find myself silently asking “why?” I’ve said it before and I’ll say it again: when this character is enjoying mainstream popularity on the hit show Arrow, it probably would have been best to launch a series that was more urban with the focus on superheroics, not a book for hipsters.

While Brenden Fletcher did pen some decent dialogue and construct nice interpersonal relationships among the characters included, the book ultimately falls flat. The DNA for a good sci-fi superhero story is there, but it’s stymied by the “Black Canary is in a rock band” nonsense. Sure, they do cap things off with a disorienting fight against The Quietus, but it ends rather anticlimactically. On the plus side, I can’t hear the music, which is probably some sort of indie rock that would make this fan of Scandinavian metal cringe.

As for the artwork, it’s kind of a mixed bag. Annie Wu’s grids and layouts provide for some great visual storytelling and would make the likes of Yanick Paquette and JH Williams III proud. Her penciling, however, is wildly inconsistent. Some images are rather striking and then others are not very pleasing to the eye at all. Lee Loughridge’s colors are once again the saving grace.

My hope is that if Black Canary continues to have comic book adventures throughout 2016, a new creative team brings a new direction sometime soon. You can’t entirely disagree with my saying synergizing with Arrow would be of great benefit.

Two DC Titles Are Among The Latest GLAAD Award Nominees