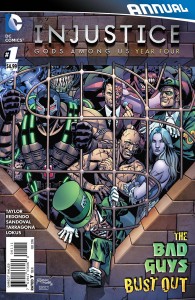 When the hit video game Injustice: Gods Among Us arrived in 2013, a prequel comic was launched in conjunction with it and became quite the sleeper hit. In fact, the series became so beloved that DC is about to fully flesh out the five years that preceded the events of the game. While I did enjoy some of the earlier issues, I confess that I didn’t keep up with the series because I didn’t care for the game.

This Annual, which wraps Year Four, sees the return of the man who scripted most of the comics in the series, Tom Taylor. The super scribe surprises us all by delivering a wild ride that centers on Plastic Man of all characters.

You see, Plastic Man’s son was part of a “terrorist” group that blew up a statue of dictator Superman, so this oversized issue sees the shapeshifting hero embark on a quest to free his incarcerated offspring. In the process, he becomes a thorn in the side of Superman’s regime and offers a humorous perspective on how far this world’s Justice League has deviated from the heroic path they once walked. On that note, we are granted some subtle looks at how terrifying a corrupted Man of Steel can be.

Lots of ingenious uses for Plastic Man’s powers are to be witnessed. When he finally does infiltrate the Trench facility to spring his son, the skit really hits the fan. As you can gather from the cover art, many cool cameos are included. I’ll just say the third act will make your inner geek cheer.

While this is part of a massive saga, it’s quite easy for the uninitiated to enjoy and you have to admit that not too many stories centered on Plastic Man come around these days. If you happen to be a fan of his, drink it in. The ending sets up Year Five, which kicks off next week.