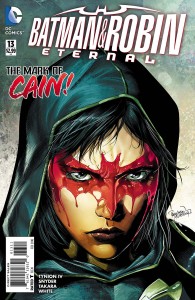 This week in the pages of Batman & Robin Eternal, Cassandra Cain takes center stage. Considering this is the series that introduced her into current continuity, it stood to reason that she would be the central focus of an issue at some point. There are nods to her pre-New 52 days as Batgirl throughout, but part of me still thinks this version of the character will adopt the Black Bat moniker.

The series has had its share of dynamic action pieces and this issue doesn’t disappoint in that regard as Cass fearlessly drops into Mother’s Nursery as we the readers join her on her quest.  We do learn more about her childhood, as well as more about Mother’s conditioning process, via some cool looking grainy flashbacks courtesy of artist Marcio Takara.

We are also treated to a more traditional flashback that sees Cass secretly meet with Batman during the events of Endgame. It seems that he was actually able to get through to her and served as somewhat of an inspiration. That sounds like Batman to me.

While this did turn out to be the Cassandra Cain Hour, Dick Grayson and Harper Row show up at the very end, just in time for an explosive cliffhanger to mark the halfway point of the series. Anytime James Tynion IV handles scripting duties, we end up with a rather good read. While this issue won’t receive the highest rating from me, I do believe it’s well worth your money.