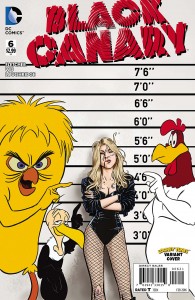 This really isn’t what you would expect from a Black Canary comic, especially when the character is enjoying mainstream popularity on the hit TV series Arrow. I’m not sure how many fans were clamoring for Black Canary to get “Batgirled” and front her own rock band, but it’s what we got.

Speaking of the current Batgirl series, the artwork is somewhat akin to it, although not as pleasing to my eyes. While I wasn’t a fan of Annie Wu’s pencils, I did enjoy Lee Loughridge’s colors. In short, the art isn’t for everybody.

There is some intrigue to be had as an element of espionage is blended with the musical element. Just as I think my interest is about to be captured, we get a literal battle of the bands that makes the aforementioned qualities complement each other like oil and water. If you are a fan of this series, you will be treated to a big reveal at the end.

My advice to most Batfans is to skip this one. If you’re looking to pick up a hot new series, go with something like Titans Hunt instead.