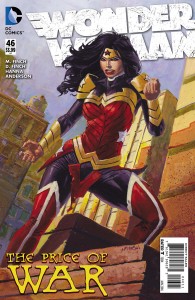 Wonder Woman by way of the Finches marches on and I must say it was actually a rather satisfying issue. It’s one of the best written and most well-focused installments of their run to date. The interior art is stellar as usual and the cover art alone may warrant a purchase; it kind of reminds me of David’s cover for Batman: The Dark Knight #1 (Pre-New 52).

Speaking of appearances, this is the first issue that I’ve reviewed since the debut of Diana’s new suit, so I figure now may be a good time to lend my opinion. While I’m lukewarm when it comes to many costumes introduced by the DC You launch, Wonder Woman’s new threads happen to be my favorite. The classic color scheme remains intact, while giving her a more warlike appearance. Redesigns can’t get much better.

Speaking of war, that very topic is what this issue is all about. Eirene berates Diana, telling her she is in no way qualified to be the God of War. It results in an interesting meditation on the balancing of war and peace. While the dialog and philosophical waxing is intriguing, the argument gets somewhat circular. At least Diana’s compassion and wisdom are as strong as ever… as are her fists.

If you missed the gods and supporting characters from Brian Azzarello’s run, you will be pleased to know that they have returned to the title in recent months. On that note, a major status quo change happens in this issue and can’t be missed. If you have taken some time off from this title, now may be the time to come back.