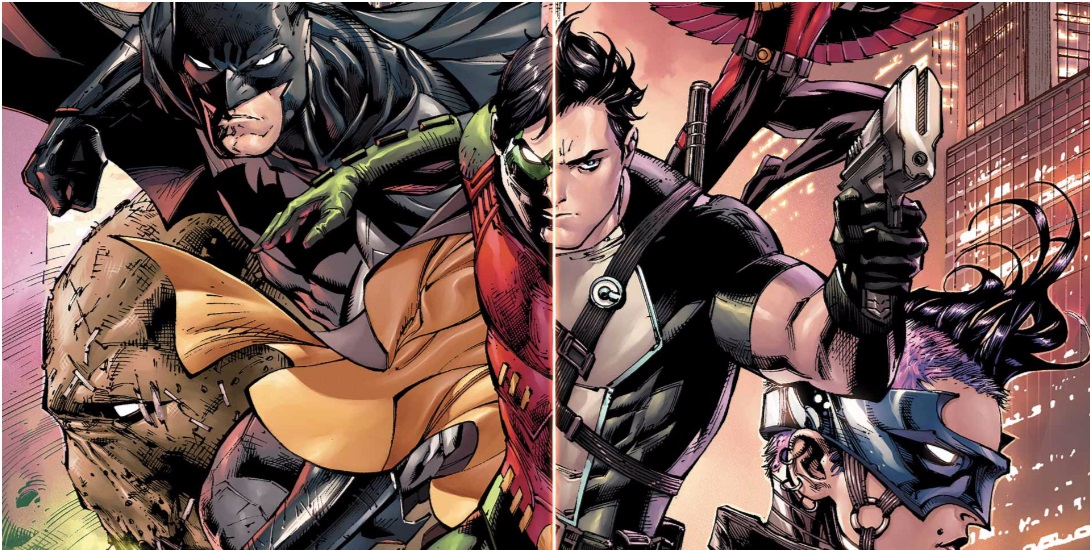 The Eternal title is back. After last year’s successful 52-issue series Batman: Eternal, you know a follow-up was in the works. The result? Make the run half as long and add a Robin… or in this case, three of them.

Issue #1 kicks off with an all-too familiar scene of a boy leaving a theater with his parents, when they are both suddenly shot and killed before his eyes. The only difference is this happened in Egypt, and obviously isn’t Bruce Wayne. We then get caught up with Dick Grayson, who is back in Gotham in hot pursuit of a thug operating a bike with his head (what?!). Soon, Red Hood (a.k.a. Jason Todd) joins the party, followed by Red Robin (Tim Drake). DC really isn’t lying to us, Robin is in this title in every way shape or form (minus Damian, thankfully). As always, the bad guy is taken out and Dick continues on his mission to a grand opening of a popular Gotham attraction. Apparently, the kids aren’t alright and are packing heat. They start shooting at Dick who presses his luck by jumping out of a third (fourth? fifth?) story window, running to the van where his ally is waiting. But hold up, she too turns on him, firing at him while he hops on his bike and takes off to the Batcave. He’s then stopped to receive a beating firsthand from Cassandra Cain…who then gives him a nifty flash drive with the Batsymbol on it.

Meanwhile, Batman (Jim Gordon) tracks down Bluebird (Harper Row) to puff his chest and get her to stop playing dress up. Bluebird makes her way back home to her brother, an avid gamer who also finds time to be worried about his sister when she hits the town. Surprisingly, they aren’t the only ones in the apartment and Harper walks in on an unexpected guest.

A lot is happening in this issue. Egypt flashbacks, Dick double-crosses, crazy kids, Scarecrow flashbacks, a creepy Orphan and Mother… whoever that happens to be. If that sounds like too much, it’s not. Snyder and Tynion IV are master storytellers and know how to give us a lot without it being overwhelming. In a way, I think it was a better setup than last year’s Eternal debut. Though we are adding Robin in here, and apparently every Robin, they will all be playing a big role… especially Dick who is the saving grace. He’s the star of the show (hopefully the title) but isn’t too much to handle. Batman doesn’t show up on too many pages, but his presence is always felt. Trust me, this may be Dick’s story but Bruce is going to play a big part of it. A great trend in Batman: Eternal that I hope carries over to Batman & Robin Eternal is the consistently great artwork and what better way to kick off a series than to bring Tony Daniel aboard. The dude is money and nails every single panel in this issue. He’s not returning for issue #2, but at least has the cover. I’m looking forward to the art on this series.

Overall, a great start for the 26-issue run. It’s fun, a great setup and is great to look at.