We Got Trolled By Michael Shannon and His “Flippers”

Many of us have seen Man of Steel, and thus, weren’t expecting Michael Shannon to reprise his role as General Zod in the upcoming Batman v Superman: Dawn of Justice.  However, the passing of time gave way to news that he might actually return as General Zod, and in an interview with Vulture, Shannon revealed that his BvS costume included some sort of flipper hands, implying a grisly transformation of the character.  Indeed, such an idea seems more than absolutely ludicrous, and if you were someone that felt that way about it, then you certainly had your mind in the right place — particularly because actor Michael Shannon has trolled us all with his flipper hands claim, which he made in jest.

Here’s what he said about the flipper hands, in case you missed out on the news:

I was in my costume, and I couldn’t use my fingers because in the sequel I have flippers instead of hands.  So I had these wax flippers on my fingers, and I couldn’t open the door, and I could hear Zack [Snyder] being like, “Where’s Shannon?  Where the f**k is he?” and the whole crew was standing around.  I was like, knocking on the door with my flippers, “Let me out of here!”

Despite all of that, Michael Shannon won’t be physically returning as an actor for Batman v Superman, and regarding the film set, he said, “I wasn’t there.  It was a really awkward situation.  I’m in the trailer for a movie that I didn’t work on.”  Furthermore, he elucidated upon the trailer’s inclusion of General Zod’s corpse by explaining that the character’s film presence may very well be akin to Kurt Russell’s Jor-El ghostly entity, which made an appearance in Man of Steel.

More specifically, regarding his involvement with Batman v Superman, Shannon said, “I went over and did some voice-over stuff because it’s like that ghost thing, but I don’t know if I’m supposed to say that.  I get very nervous.”

Considering all of this information, we can conclude that a) General Zod will not have flipper hands, and b) General Zod’s inclusion in the film may be limited to voice work, unless Shannon’s voice-over work is superimposed onto a digital recreation of his character.  Furthermore, Shannon wasn’t sure if he was supposed to spill the beans on that little detail, so Hollywood guys, please be nice to him, and don’t shoot the messenger.

Overall, I’m sure many of us have mixed feelings about the whole Zod thing in BvS.  Some of us were looking forward to more Zod, some don’t care, and some really wanted to see how those freakin’ flipper hands would have come into play.

Here’s what Shannon said about his little iddy biddy flippers:

Somebody was asking me about this in New York, and I made up some ridiculous bulls*** answer about how my character Zod has flippers, and this [info] went viral on the Internet or something, and people have been asking me about that.  That is so obviously a complete bulls*** story, right?  But people took it seriously.

You got trolled by General Zod. 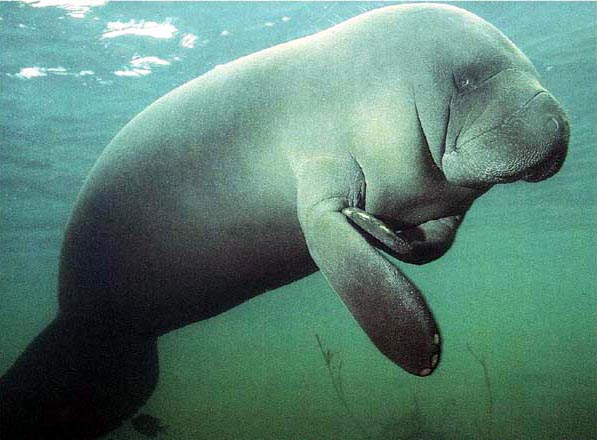 This is a manatee, a herbivorous marine mammal that has cute little flippers. Manatees can weigh up to 1,300lbs.