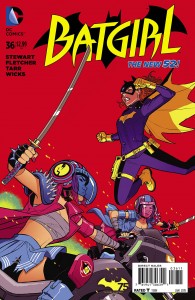 The bold new direction that has captivated readers and already inspired cosplayers continues in the pages of the latest issue of Batgirl. If you thought the last issue was good, you may find yourself enjoying this issue even more. It’s still a pretty dense read, but is a little lighter than the previous issue, which read like a George Perez comic from the ’80s. At least the dialogue is well written and captures the essence of the age group depicted.

Babs Tarr once again knocks it out of the park with her artwork. It has a distinct look when placed among other DC books currently published and the layouts are out of this world. The creative team finds more crafty ways to showcase Barbara’s eidetic memory and there are even some manga influenced action sequences. Those are highly appropriate since she has to deal with motorcycle riding ninjas who are obsessed with anime.

The book balances the dual lives of Barbara Gordon and Batgirl rather well. A possible new love interest is also introduced. I was on the fence with this title even though last month’s issue was pretty good, but now I have much more confidence in it. Give it a chance if you haven’t already. Score: 8.5/10 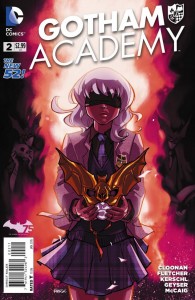 With so many books that take place in Batman’s corner of the DC Universe, it can be hard to find ways to make new titles seem unique. Gotham Academy goes the route of focusing on characters who occupy that world, yet are seemingly unrelated to Batman. What is it like to attend a school in Gotham City? This book is willing to show you.

The book has a great sense of adventurism and is probably the closest you will get to Hogwarts in Gotham. It’s well written and features some downright beautiful manga-style artwork from Karl Kerschl. I was first taken by his work upon seeing his Batman 75 variant cover for an issue of Superman/ Wonder Woman over the summer and I’m glad to see that he’s found steady employment at DC. This issue also sees an appearance from Bookworm, a lesser known villain that fans of the Batman ’66 TV series will recognize.

Although I admit this book was technically good, it wasn’t entirely for me. Perhaps this will be most enjoyed by teenagers or those in their early twenties. Maybe I’m wrong, but I just didn’t find it too relatable. If this book intrigues you even in the slightest, you should at least give it a shot. Score: 7/10 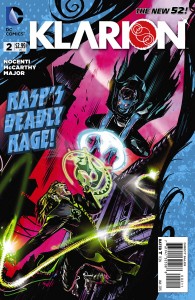 I’m sorry, but I really have a hard time getting into Ann Nocenti’s latest offering. Her runs on Green Arrow and Catwoman were pretty bad and Klarion certainly doesn’t break the mold. After a disappointing first issue, I thought this one had a fighting chance because it started off just fine before going downhill on a rocket powered toboggan around the halfway mark. The book is essentially a ham-fisted marriage between magic and technology that should end in divorce. I’m sorry if this review is a bit brief, but the less I say, the better.