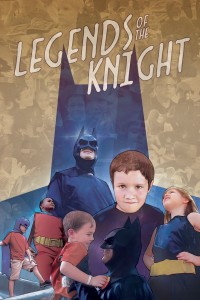 Fans of DKN have no doubt seen our coverage of director Brett Culp’s touching documentary film Legends of the Knight throughout this year. If you unfortunately missed a screening of it in your hometown, or can’t wait to see it again, you will be pleased to know that it will be available on DVD and Video-On-Demand November 18 (cover art can be seen to the left). Much thanks go to Virgil Films for bringing this to the Batcaves of fans everywhere.

The film is described as follows:

LEGENDS OF THE KNIGHT is a documentary film that explores the power of heroic storytelling & the inspirational impact of Batman. Through the deeply personal tales of Batman fans, writers and filmmakers,  this feature-length documentary encourages viewers to find their own uniquely courageous paths. Featured in the documentary are Michael Uslan (executive producer of the Batman films),  legendary comic book writer Denny O’Neil, and Jill Pantozzi (editor-in-chief of the Mary Sue). Comic book fanatic Kevin Smith reviewed the film on his podcast and stated “You will not see a movie emotionally engaging Batman Movie than Legends of the Knight in your entire life.”

I have yet to see it in its entirety myself, but I can certainly relate to the testimonials of the writers and fans featured. Batman has entertained and inspired me just as he has countless fans over the past 75 years. Any character that can not only capture your imagination but also help develop your moral compass is truly remarkable indeed.  It may sound silly to some that a fictional character inspires me to do the right thing, but if you’re visiting this site, something tells me that you can probably relate. It’s the IDEA of Batman and what he stands for that unites us.

If you would like to read a review of the film written by my colleague Adam Poncharoensub, please click here. Below is a trailer you can view as well as links to some social media pages.

Legends of the Knight – Official Trailer from Brett Culp Films on Vimeo.