It may have been out on DVD and Bluray in North America for some time now, but for Canadian television viewers, Justice League: The Flashpoint Paradox will be airing this week on Teletoon for the first time. This highly acclaimed, Batman centric, alternative timeline, animated feature film will be featured as part of the “Teletoon at Night Superfan Movies” block of programming. The Flashpoint Paradox will be shown during Friday, September 26th’s “Superfan Movies” section at 9:00pm (ET/PT).

For those who haven’t seen or heard of this film, it’s based on the comic book mini-series Flashpoint written by Geoff Johns that centres around The Flash and a Batman of an Alternate timeline that The Flash awakens in after a tangle with his arch nemesis, The Reverse Flash. It’s a great story and features a very unique and different Batman than most of us are used to seeing, which is always really cool to check out. Also it’s directed by Jay Oliva, the same man behind the incredible Dark Knight Returns animated flicks. 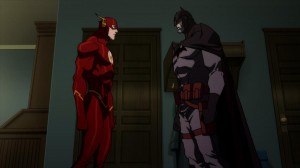 Luckily for my fellow Canadians and I (and probably several US citizens near the northern border) can tune in to Teletoon at Night, tomorrow evening at 9pm (ET/PT), and either check out this action packed adventure for the first time, or relive it’s amazing twists and turns all over again.