Review: The Multiversity: Society of Super-Heroes: Conquerors From The Counter-World #1 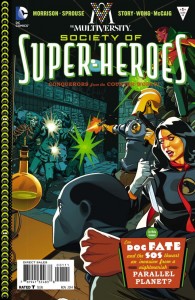 THE MULTIVERSITY: SOCIETY OF SUPER-HEROES: CONQUERORS OF THE COUNTER-WORLD #1 by Grant Morrison and Chris Sprouse

As Grant Morrison’s latest magnum opus The Multiversity rolls on, we come to the first of six one-shots to focus on specific alternate Earths populating the DC Multiverse. If the pulp-style cover had not been your first hint, it won’t take you long to notice that this Earth is a little more retro. You can almost hear big band music emanating from the pages. It’s all brought to life by Chris Sprouse’s spectacular art and I’d be remiss if I didn’t mention Dave McCraig’s colors that shine, literally and figuratively.

Speaking of the retro look, fans of The Rocketeer will likely adore Doc Fate’s costume. This wearer of the Helmet of Nabu is seemingly the leader of this Earth’s super team, the Society of Super-Heroes, or SOS. He and other heroes such as Immortal Man, Green Lantern Abin Sur, Al Pratt, and the Blackhawks go to war with another Earth as both worlds are joined by a bizarre cosmic alignment. The foes they battle include Vandal Savage, Felix Faust, Lady Shiva, Parallax, and even zombies. Yes, you read that correctly. Guess what? It was incredibly well done. Morrison may be the only writer who could pull off something so wildly ambitious.

Grant does such a fantastic job of telling the story of this world in just one issue. It’s completely immersive and these characters could likely sustain an ongoing title. This could be enjoyed simply as a one-shot, but you would be doing yourself a disservice by not reading the rest of the series. It’s hard to think that this issue’s portentous ending wouldn’t leave anyone salivating for more.

We also get a teaser for the next one-shot, “The Just”, before closing the pages. If the next installment is half as entertaining as the tabloid-esque cover looks, it will no doubt be worth the money. In the meantime, read about the adventures of the SOS in the most absurdly entertaining war comic you could buy. Score: 9.5/10