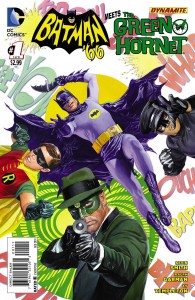 Regardless of your opinion of the Batman TV show from the 1960s, you can’t deny the significance of it when it comes to Batman’s history and how much it contributed to the character’s mythology. Without it the comics would have been cancelled. Last year, DC revived the show in print form with the ongoing Batman ’66 – a series that has received much acclaim. I’ve unfortunately been unable to check out that title, but decided to sample this mini-series because I couldn’t resist the dream team working on it. Who comprises that dream team? Filmmaker Kevin Smith shares writing duties with his Hollywood Babble-On co-host Ralph Garman, with art being provided by Ty Templeton. I’m hoping that Smith manages to complete his trilogy that started with Cacophony and The Widening Gyre, but it’s great to have him on any Batman book, regardless. Oh, Alex Ross provides cover art. Are you sold yet?

This mini-series is essentially a sequel to the crossover the TV series did with Green Hornet nearly 50 years ago. Although I’m a fan of the show, I don’t remember too much about it because I’ve probably seen said crossover one time. It’s important to understand the significance it had at the time. Smith said that it was that period’s equivalent of The Avengers and he’s absolutely right. Speaking of Smith, he and Garman absolutely nail the dialogue in this book. They found the voice of every character; you can hear Adam West, Burt Ward, and even the show’s narrator as your eyes run across each line of dialogue. How Templeton’s art perfectly captures the likenesses the cast is beyond me. Tony Avina’s colors complement his illustrations beautifully.

Fans of the TV show will feel right at home. Colonel Gumm, the villain of the piece, evolves into General Gumm and puts the heroes in a sticky situation of a cliffhanger. Yes, they wisely place narration at the end as well. Even if you didn’t see the Green Hornet’s appearance on the series, this is friendly for any reader to enjoy. It’s probably the most fun you will have reading a Batman comic this year. Score: 9/10