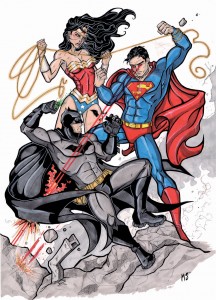 First of all, let’s get this out of the way: if the upcoming 2015 sequel to Man of Steel  is confirmed to feature Batman, Superman, and Wonder Woman, it’s a Trinity feature, the “Holy” trinity of DC Comics if you will, and the fact that no one has started calling it Trinity yet is irksome. And even then, with all of these rumours floating around about the Flash, Nightwing, Green Arrow or even Green Lantern being in it as well (the Flash already having been tentatively confirmed) we really might as well call it Justice League. That being said, we might as well also call it DC’s Rushed Imitation of the Avengers, or  Batman and Robin 2.0, because it’s highly possible that this movie will be uninspiring or at least mediocre. The reason: too many characters.

Yes, yes, you’ve probably already heard the same thing from many other nerds out there: that there’s too many characters, that there will be no time to develop them, and it’ll be rushed and confusing, etc. etc., and that’s because it’s true. When there is crossovers of characters, there is a high potentiality for the whole movie to go wrong. Think of it like a house of cards – the more cards you add, the bigger it gets, and the more disastrous it will be if it collapses. When the creative team of a movie has too many cards to deal with, the movie may fall apart.

Seeing that DC is doing its best to catch up with Marvel after The Avengers, it wouldn’t be a proper argument if I didn’t compare the two movies. So let’s take a quick second to see why The Avengers worked.

Marvel’s success with the Avengers stunned all of us. When you think about it, before that movie came out there were so many variables in it that could easily have gone catastrophically wrong. No one had ever done anything like it before. The Avengers is the first movie of it’s kind. What held it together, however, was the characters who had appeared in previous films and who were already well established. People knew Iron Man, they knew Thor, they knew Captain America, they knew Hulk, Black Widow, Hawkeye, Coulson, Nick Fury and even Loki. All it was down to then was watching these characters come together and beat up an alien army. Character development wasn’t as much of a priority, because it had already been done in the previous movies. That took a significant amount of challenge out of the whole project. All they had to work on character wise was the dynamic between the characters, and thanks to Joss Whedon, that worked out so well that it held the movie together the rest of the way. Because the team had such a wonderful dynamic, it was an incredible movie, to the point where any other inconsistencies in the story (of which there were many) could be easily skimmed over by the viewer.

Granted, DC is not Marvel – their material is darker and more serious and they generally have better villains, whereas Marvel is more lighthearted and puts more focus on its heroes – so they will be catering to a slightly different audience. People walking into Trinity, or as it might even be, Justice League, will be expecting themes that are much different from the fun, action-packed content we get from Marvel. But character dynamic and development is going to be a key part of making this film, simply due to the fact that there are so many characters in it. Were this a simple sequel to Man of Steel, with just Superman/Clark, Lois, Jimmy Olsen (or Jenny Olsen, in this new DCMU) and a villain (Luthor being the most obvious choice), the focus would have to be more on the plot, since we all know these characters from pop mythology and from the previous film. But given that Trinity will have not only the previous cast but also newly introduced Justice Leaguers, whose roles in the Snyderverse have yet to be determined – Wonder Woman, a seventh live-action Batman, the Flash (the casting for whom is not yet known, and if they do decide to cast Grant Gustin from the Arrowverse, they might as well add Arrow himself, Stephen Amell into the mix), rumors of Nightwing and even Green Lantern (Possibly played by Denzel Washington). As if that weren’t wen’t enough, try counting all of the villains that have been rumored. Lex may be the only confirmed one, but there has also been mention of Doomsday, Metallo, and in the case of a Justice League feature, Darkseid. Not to mention the possibility that, along with some of these other heroes being introduced, some of their own villains might come into play as well.

Even though most of the discussion about Trinity these days is just fan speculation, they’re entirely real possibilities, and even the ones who have been confirmed are going to be difficult to both develop and establish a dynamic amongst the other characters. How are Batman, Superman, Wonder Woman and the Flash going to get along? How are they even going to fit in all of these new heroes in such a way that the audience can understand and relate to them? Who is the villain in the first place, if not Lex? And what could he — one puny, non-meta human — really do that would actually cause damage to these four heroes, three of whom are meta and one of whom has the powers of a god? There are so many concepts to juggle with here, and whilst they may, like the Avengers, miraculously succeed in creating a fantastic movie that everyone loves, it’s a one in one hundred possibility. They could create a beautifully structured house of cards, or be left playing “52 Pick Up.” And judging by the quality of Man of Steel, my bet is on the latter.

This brings me to my other point – Man of Steel could really have been better. There are a great number of people out there who like it, and that’s great. It was a good movie. However, it was not a great movie. The quality of Man of Steel was heavily degraded by useless flashbacks, gratuitous and completely unnecessary destruction, and Lois Lane’s mediocre part. Amy Adams did her best with what she was given, and her best is very good, (evidenced by her 4 separate oscar nominations and 5 golden globe nominations) but let’s just face it – the only thing that she and every other female in that movie did was scream their guts out. Not to mention the fact that Zod is a villain who really should have been saved for a sequel, despite the fact that he was the best part of that movie. The politics of pre-catastrophe Krypton are uninteresting and a little more complex than should be expected from the first movie of a franchise. Whilst Michael Shannon’s portrayal of Zod was beautiful and haunting, his performance would have been much more powerful and would have been given much more opportunity to shine had he been in a sequel, wherein the protagonist and other supporting characters would already have been developed. But Man of Steel is what it is, which is to say, not entirely spectacular.

The CG overkill and lack of organization or substance were not only the fatal flaws in this movie, but they were also a part of a pattern that exists in most of Zack Snyder’s other movies – that is, they are all good or ok, but still consist of disorganized plots, characters without substance (one-dimensional women and mostly predictable men), and the most glaring problem of all being CG overload. His movies aren’t necessarily bad, but they’re never outstanding either. They range from good to just “ok.” And that’s the spectrum that Man of Steel found itself in. I don’t think his style of filmmaking fits with a movie on such a grand scale as Trinity or Justice League, character-wise. Knowing that The Avengers was held together simply by the character dynamic, a guy like Snyder, whose characters tend not to have much substance, may not be the right person for the job.

While it’s still possible that Snyder could turn around and amaze us all, since this movie only recently started filming, it’s highly unlikely. DC’s ambitious and seemingly rushed push for a live-action Justice League movie — combined with Zack Snyder’s previous patterns in his films — don’t seem to fit and certainly don’t seem right for the time being. Trinity is cool in theory, but taking all things into consideration, it is not something to be optimistic about.