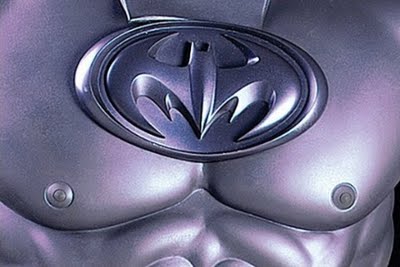 Now, the bat-nipples will be preserved for generations of Americans to see as an eternal part of their country’s history.

The Smithsonian Institution’s National Museum of American History in Washington received a donation from Warner Bros. Pictures of costumes and props, including George Clooney’s Batman cape and cowl, Christopher Reeves’ Superman suit from Superman III, and Halle Berry’s Catwoman suit (which, like the bat-nipples, should have been killed with fire a long time ago). Thank God Night at the Museum isn’t based on a true story.

The museum holds thousands of other film artifacts, such as Dorothy’s ruby slippers and even Kermit the Frog himself, but the latest introduction to the museum’s collection was the Spider-suit from the broadway musical “Spiderman: Turn Off the Dark,” which closes this weekend but might reopen in Las Vegas in 2015.

As of right now, they have an ongoing exhibit entitled “Puppetry in America.”

Opinion: Why “Trinity” (Batman/Superman) IS Something to be (Cautiously) Optimistic About