Greg Berlanti, writer/producer of Arrow, was recently asked about whether or not there are any plans to connect the DC cinematic Universe with Arrow. Of which, he says that he has not had any talks with DC or WB about the subject.

There has been rampant speculation regarding whether or not DC would make some smart upcoming decisions with regard to the start of their cinematic universe. Since Marvel has began expanding their universe to the small screen via Agents of S.H.I.E.L.D., fans have wondered whether DC would go the same route with Arrow. 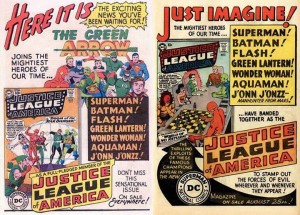 Stephen Amell, himself, has teased as the possibility of him joining the DC cinematic universe by way of posting JLA covers specifically focusing on Green Arrow joining the Justice League. Since then, speculation has only gotten stronger after rumors surfaced that Nightwing will be appearing in Batman vs. Superman while Steven McQueen started posting seemingly simultaneous pictures of himself at the gym with a caption that read “Nightwing training,” while tagging Twitter accounts significant to Arrow. Need more fuel to add to the fire? It was recently announced that the Flash would be appear on Arrow soon, to be spun off into his own standalone TV series, all of which came when more rumors started sprouting that the Flash may make an appearance in Batman vs. Superman. With all these coincidences cropping up between Arrow and Batman vs. Superman, there’s gotta be a plan in place to connect them, right?

Well, according to Arrow writer/producer, Greg Berlanti, he hasn’t spoken to DC or WB about it.

“We haven’t had any of those conversations other than to say, what characters are we allowed to use this year and advocate or request certain ones that are of interest to us. And every now and then, they’ll say, ‘You can’t have that guy.’ They don’t say why, and we figure out why later on.”

It seems that if there are any talks to connect Arrow with the DC cinematic universe, Berlanti ain’t in on it. Though this doesn’t quite put the kibosh on any hopes of seeing them connected, it’s certainly casts a lot of doubt. Berlanti’s pretty integral to Arrow and if DC/WB isn’t telling him about it, it’s unlikely it’s going to happen.

What do you think? Do you think it’s still possible that Arrow and the nascent DC cinematic universe will somehow be connected? Or do you all hope of that expanded DC universe is gone? Are you disappointed? Let me know.