Producer Daniel Alter recently tweeted  some information regarding Batfleck in Batman vs. Superman.

These rumors just keep getting more and more interesting, don’t you agree? Each new rumor seems far more ridiculous than the next, but remember that there’s at least some truth to some rumors. When Affleck’s name came up on a list of potential actors to play Bats, I completely dismissed him and focused on the other actors appearing on the list, never once batting (HA!) an eyelash at Affleck.

A couple weeks ago, a huge rumor popped up that Nightwing was to be featured in Batman vs. Superman. Since then, the Internet has cropped up three potential actors in Adam Driver, Penn Badgley, and Ezra Miller. Obviously, none of this has been confirmed, so for me, it sits comfortably in the rumor pile. The news here, however, is that producer Daniel Alter recently tweeted something quite revealing.

Apparently, it’s not quite Nightwing and it’s not quite Dick Grayson either. Hell, it’s not even confirmed that Robin will physically appear in the movie. Alter simply mentions that Bats is, apparently, not on speaking terms with the Boy Wonder. So it could simply be a plot point to go over when introducing this incarnation of the Dark Knight.

Now, all sidekick talk aside, let us address some of the more significant details in this tweet. Apparently, this Bats will have been semi-retired, feeling so disillusioned with crimefighting that he feels the only efficient way he can maintain order is through controlling androids from some sort of self-imposed exile. Batfans and comic book readers will recognize the storyline from a recent Batman Incorporated by Grant Morrison and Chris Burham and prior to that, it was utilized in the iconic miniseries by Mark Waid and Alex Ross, known as Kingdom Come. 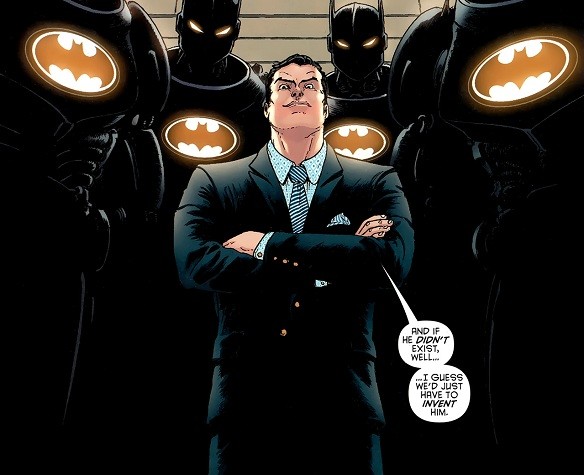 This would obviously be unlike anything we’ve ever seen in the live-action flicks before and if it is in fact true, it’s pretty commendable that Goyer and Snyder are willing to go that far away from convention. Now, I may consider it commendable, but I can imagine other Batfans will be particularly displeased with this new update. There are so many forms of the Bats yet unrealized on the big screen and to go for something this extremely different may not be the right route.

There’s also something very important to consider here. Daniel Alter may be a movie producer, but he has absolutely nothing to do with Batman vs. Superman. In fact, he only has three movie credits to his name, Hitman, The Apparition, and the live-action Kane & Lynch movie that was recently put on hold. Of those movies, only The Apparition was released via WB. So… can you really trust this guy? I remain skeptical. Therefore, I dub this new information a rumor. As always, make sure you’ve got some salt ready.

What do you think? Do you believe him? Do you like the idea that this live-action Bats has sequestered himself in his Batcave, content to control automatons? Let me know.

Infinite Crisis Behind the Voice: Harley Quinn and Catwoman