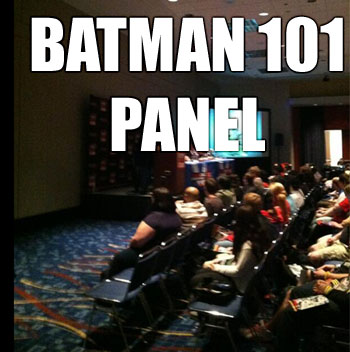 Chicago Comics and Entertainment Expo 2013 has begun with Day 2. The fourth panel of convention is Batman/Superman 101. Click the jump to see more.

Day 2 at C2E2 is already starting off nicely and it’s well on its way to starting off DC Comics just right. The fourth panel of the convention is Batman/Superman 101 featuring Kyle Higgins (writer of Nightwing), Peter J. Tomasi (writer of Batman & Robin), James Tynion IV (writer of Red Hood & the Outlaws and Talon), John Layman (current writer of Detective Comics), Chris Burnham (artist of Batman INC), and Jimmy Palmiotti (current writer of Batwing). Along with these two are the rest of the panel such as SVP-Sales Bob Wayne, Editor-in-Chief Bob Harras, Editorial Director Bobbie Chase, and Kenneth Rocafort (artist of Superman). You can see them from the vine gif below:

Here’s the breakdown of the Batman/Superman 101  panel:

It’s telling the beginnings of Batman in a different and very unexpected way. What I can’t emphasize enough is what Greg and Scott have been doing on Batman, the amazing teamwork. We’ll change a couple things about Batman but remain true to the character and show some challenges as he became Batman.

So, we can say this for sure that we will be seeing Bruce becoming Batman. However, there is no ninja training or going abroad for Bruce in this Zero Year story telling. What one can assume from this is that we will probably see Bruce get the idea of becoming Batman and then see him fail at being Batman in different situations across Gotham City in his beginning days. Some serious writing and artwork there.

Finally, we get to see more of what’s to come for Batwing. Jimmy Palmiotti has been at the forefront of promoting Batwing and representing the character and story since Luke Fox has taken the mantle of Batwing. Here’s what he had to say:

#19 was a changing of the guard. The original Batwing, David, decided it was time for him to not be Batwing anymore. We made Luke Fox, Lucius Fox’s son the new one, and with that comes a lot of problems. A lot of things are going on, including Bruce not telling Lucius that he’s bringing on Luke.

We’re handling Luke as if he’s Bruce Wayne in a superhero suit – so he’s a young, handsome, rich guy who keeps that attitude when he’s in the suit.

He’s dealing with the fact that he’s being looked after by Batman, and Batman is sitting there commenting on everything he’s doing. We’ll see Luke growing into the suit, having to deal with the fact that his dad is involved in everything. We’ll also introduce a new cast of characters and tie in much more closely with the other Bat books. The book has a lot of heart.

It’s good to see Palmiotti dish out about Luke Fox’s character and personality. Hopefully, Justin Gray and Palmiotti haven’t made Fox seem too cocky about being Batwing. From the way, Palmiotti has described the character, Luke Fox will be making many mistakes that will ultimately humble him in the end. Yes?

Chris Burnham (artist of Batman INC) briefly talks about what’s to come in Batman INC #13. However, he does talk about Damian affected him.

I found out about Damian’s fate after my first or second issue, once I  got my exclusive contract and signed with my DNA, I got the plot outline for the second season of Batman Inc. And I said “You’re going to make me draw that?”

Burnham eludes to the issue where he illustrated Damian being killed.

James Tynion IV dishes out about when Cheshire will be appearing and the Red Hood & the Outlaws Annual #1. He states this about the outlaws’ new challenges and struggles:

This one again, I wanted to get to the heart of our three main characters, Starfire, Red Hood, and Arsenal. I threw a big wrench in their group dynamic in #19, and it will make them reevaluate who they are, what they have to do to stay together as a team, and if they should.

In the annual next month, we’ll see the first appearance of Cheshire, and the first real interaction between Green Arrow and Roy Harper that we’ve seen so far.

We’ll also deal with why Talia had a special interest in Jason Todd. We’re going to be exploring that a little.

As far as Cheshire is concerned, this character is going to be sick. She can become a new element for the outlaws to struggle with. Hopefully, Tynion will not introduce a love triangle between Starfire and Roy Harper. It would be a bit tacky. But, we’re glad to see Cheshire in The New 52.

Tynion is doing wonders with Bane, whether or not he brought Bane back due to high demand or for his storytelling. It seems that Tynion knows how to write this character and get to the heart of him all at the same time.

Bane came into Talon, I get to the heart of Bane, and bring him back to his roots. The story will go back to the island he (Bane) was born and raised on, and building up a new cast of characters around him to lead to big things to come. Pulling the rug out from under our readers with a big twist in Talon #6, it seemed like we were building in one direction and now we’re veering in a dramatic fashion. There’s really fun big stuff coming up in the book.

Bane will be extremely relevant again in comics.

John Layman talks about the new anti-Batman and states that the Emperor Penguin story arc will be ending with a satisfying conclusion.

This is Detective Comics. This is the job, I don’t care about his love interest or his personal

life. I’m making them very self-contained, with a beginning, middle, and end in every issue. The Emperor Penguin story arc,  has a really satisfying conclusion. What’s coming up is a 3-parter starring The Wrath, who’s getting the New 52 treatment. He’s a more obscure villain, and he’s the anti-Batman. He’s a rich playboy with a lot of money, gadgets, and cars, and guns. And he hates cops. It’s the battle of the rich boys.

Layman has been doing a decent job with Detective Comics providing a one-shot story for each issue so that anyone can jump into the comic book title and not feel lost. It’s exciting to see him create a concept around characters and develop a wonderful story instantaneously. Good job, Layman!

Q1 : Excited to see Azrael return, is that permanent?

A1: Yes, he’s in the DC Universe and part of the Batman family in the New 52. Unless we kill him.

A3: Keep reading. I wonder if something like that would come up in Batman Zero Year…

Q4: The process of designing the new Batwing?

A4: We took a lot of time. Obviously, Batman Beyond was a big inspiration. The armor and all that, might not be good for the fighter. We took it more like Apple, where everything is streamlined. More sleek, slim. And Luke will continue to tweak it and fine-tune it all the time as it goes on.