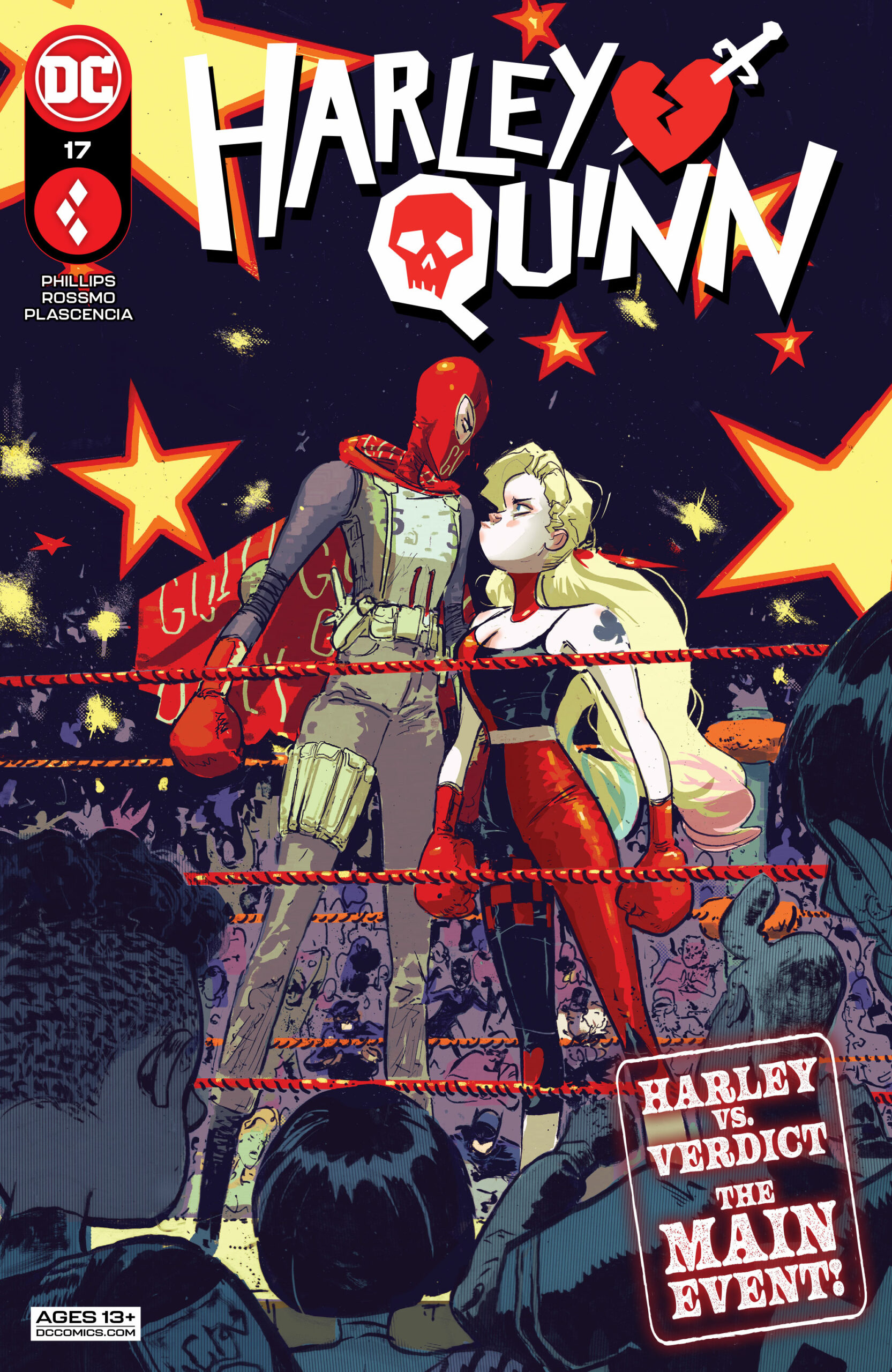 Harley Quinn #17 delivers the conclusion of “The Verdict” storyline. All the cards are on the table and, when we last left our crew of Sam, Kevin, and Harley Quinn, things were not on the most friendly of terms.

With everything in the open, it’s time to see just where everything will fall. We’re also graced with covers from Riley Rossmo and Derrick Chew to choose from, plus a stunning Ratio Variant from Leirix as well. 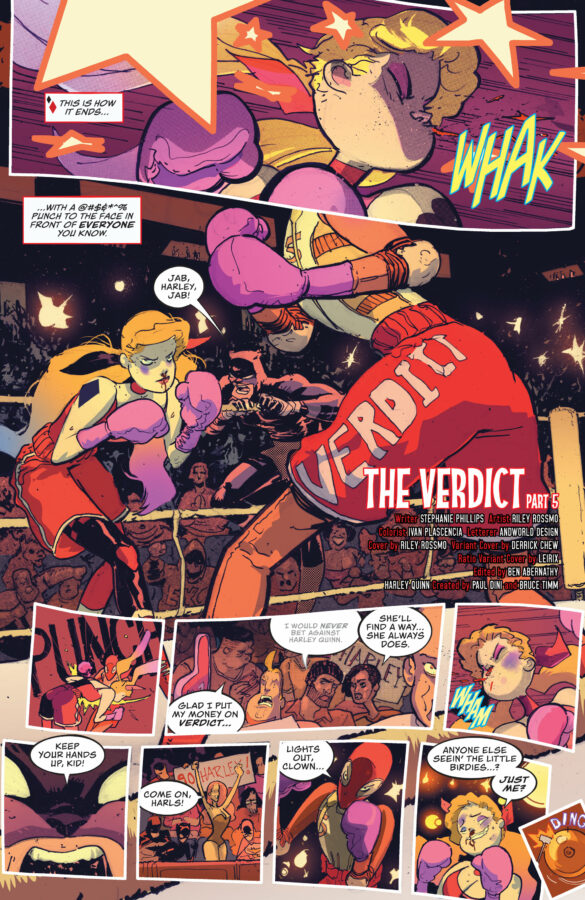 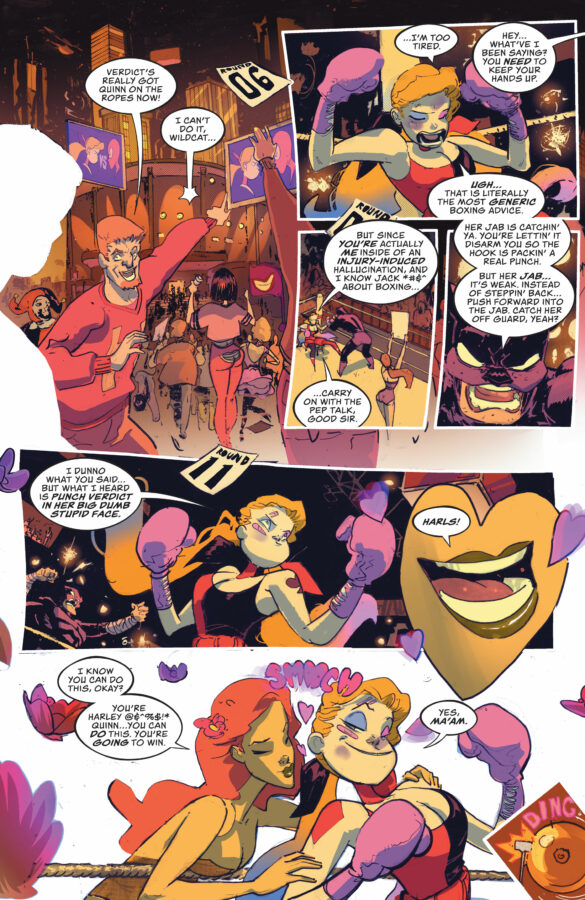 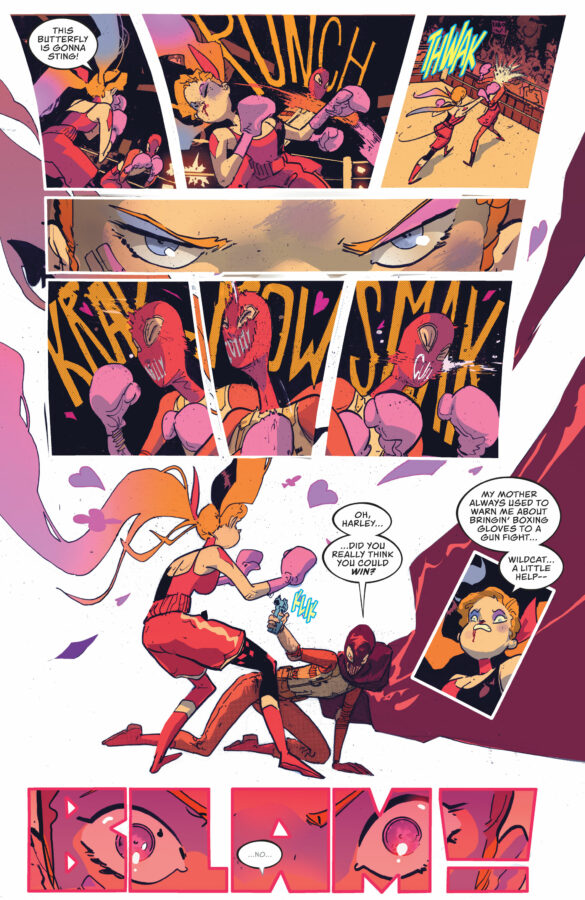 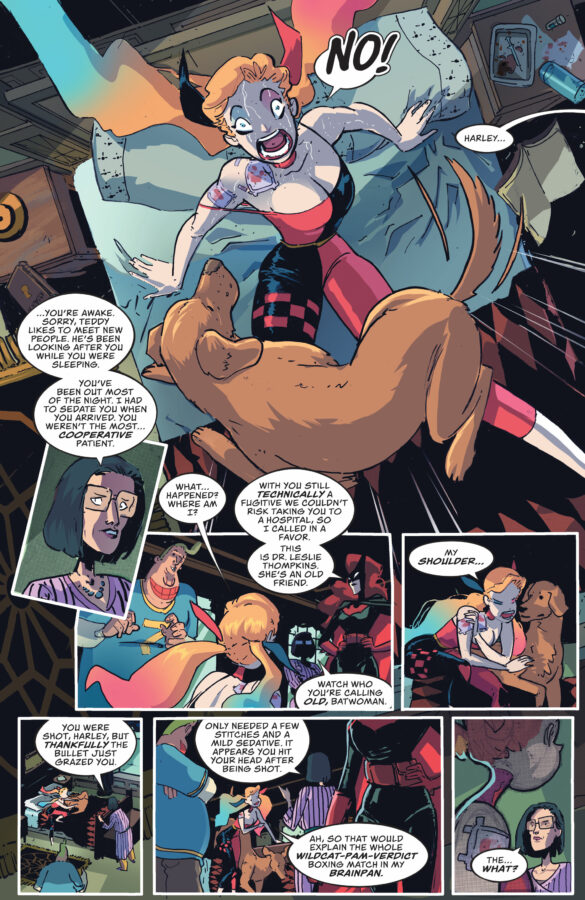 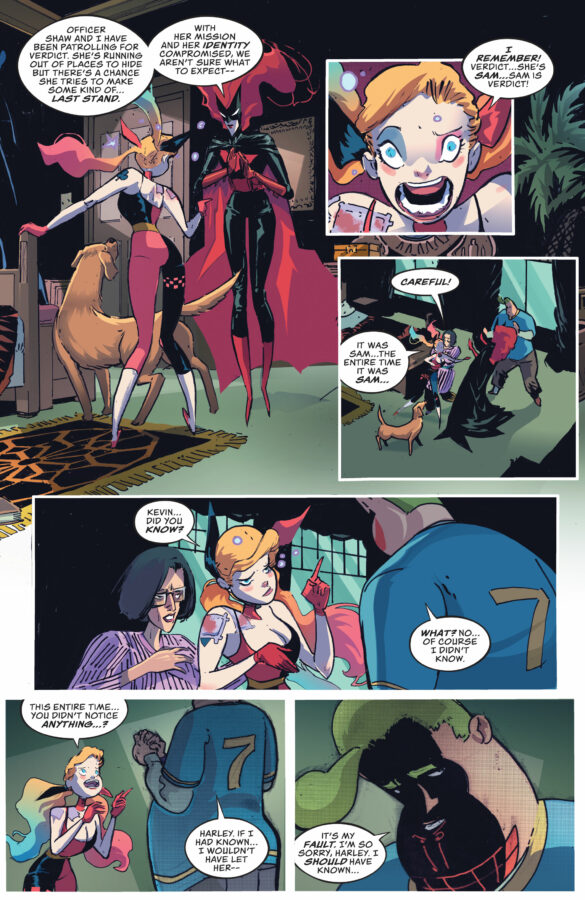 When last we last left Harley, Sam had not only been confronted by Kevin but we got to see what led to her becoming The Verdict. The issue ended with a shot ringing out and readers not knowing just what we may be facing in this next issue. A fight in the middle of an injury-induced delirium may be one of the best things that this series has ever given us, with moments of Ted Grant, Batman, and Ivy cheering Harley on, as she partakes in fisticuffs against Sam.

Hooked On A Feeling

Harley Quinn #17 gives readers an amazing finish to a great arc, not just for Harley but for Kevin as well. There are two things that stood out in this issue that left me haunted. There’s a scene with Harley talking about how she isn’t who she used to be, where she states that she’s proud of the Harley she is now and, honestly, it’s just a stunning moment. Watching someone, especially a character you have ridden with through all of their highs and lows, finally accept themselves is a beautiful experience.

The second thing was just how relatable and attuned to the real world Sam, with all her anger and desperation, is. Yes, there have been plenty of villain backstories with relatable reasons given for the choices they make, but this one feels different. This isn’t about an extreme that would only happen in a comic or in the realm of animation, nor is it something mystical or magical. This is a story about a woman who’s employed in a position to uphold justice, someone who’s relied upon to be above the law for the protection of the public. To watch all that she believes in and stands for ripped away by greed and indifference, and to have nowhere to turn because the toxicity runs deep… is it any wonder that she believed there was nowhere to turn?

It’s a credit to this entire creative team, writer, and artists, that they were talented enough to bring such a relatable and real situation to life. 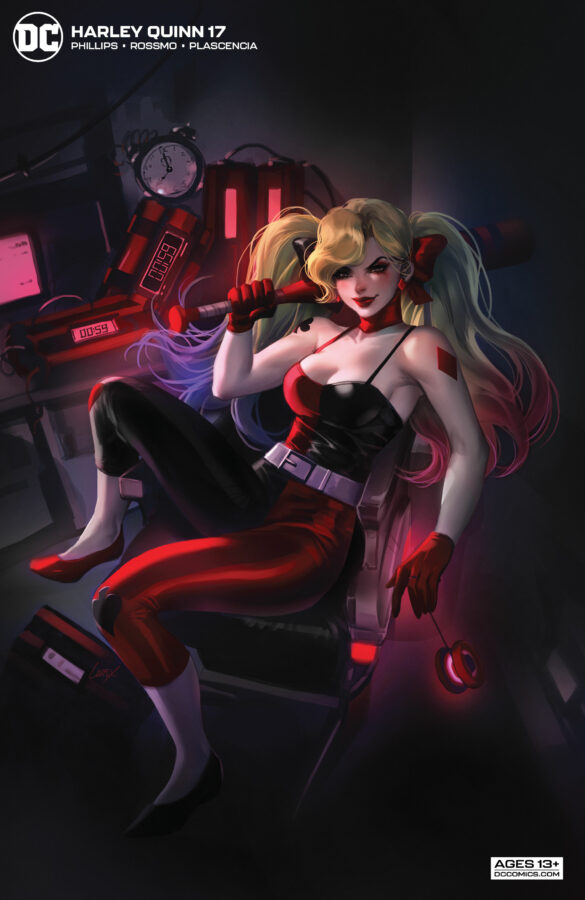 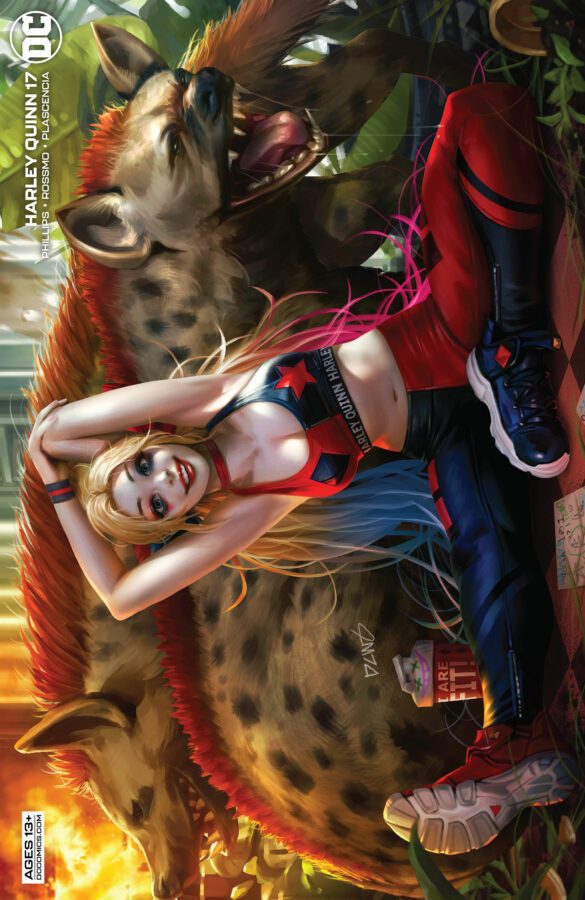 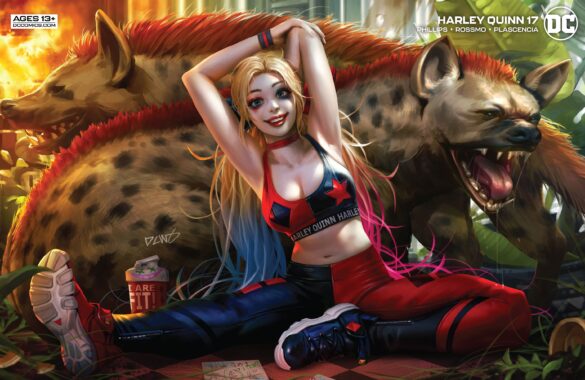 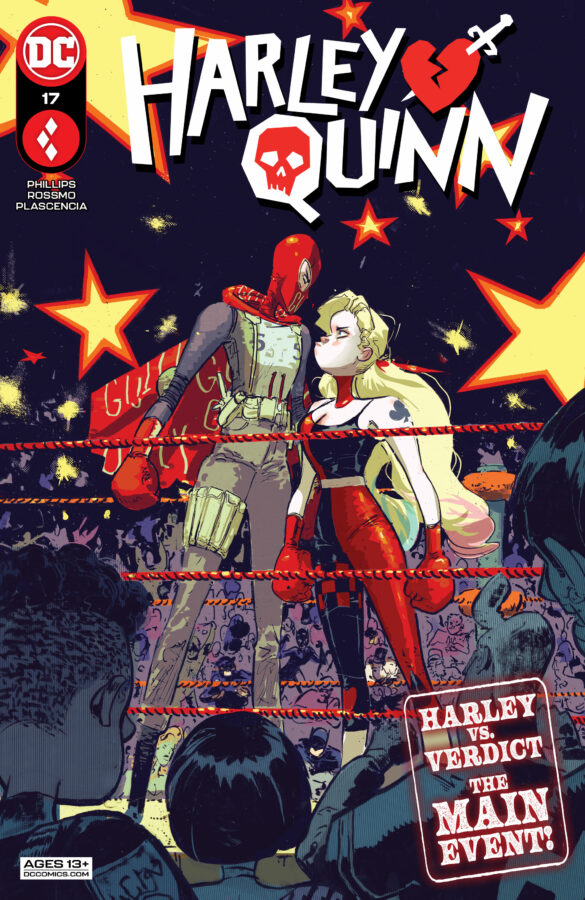 This Is A Tribute

One of the additions at the end of every DC title this month was a touching homage short to the late Neal Adams, who passed on April 28th, 2022. Written by Tom King, with art by Josh Adams, colors by Hi-Fi, and letters by Clayton Cowles, we get a ComicCon-esque view of Adams as he talks with all the different characters he had a hand in shaping, in one way or another. This includes several creators’ memories of Neal. We get quotes from Jim Lee, Terry Austin, Laura Siegal Larson, Bill Sienkiewicz, Frank Miller, Denys Cowan, and so many others. It’s a beautiful moment of remembrance for a creator who touched so many lives with his craft. You will be missed, sir. Thank you.

Harley Quinn #17 didn’t only give us an amazing finish to a great story, but also a perfect way for the character to move forward. I can’t wait to see what’s still to come in Harley’s future.