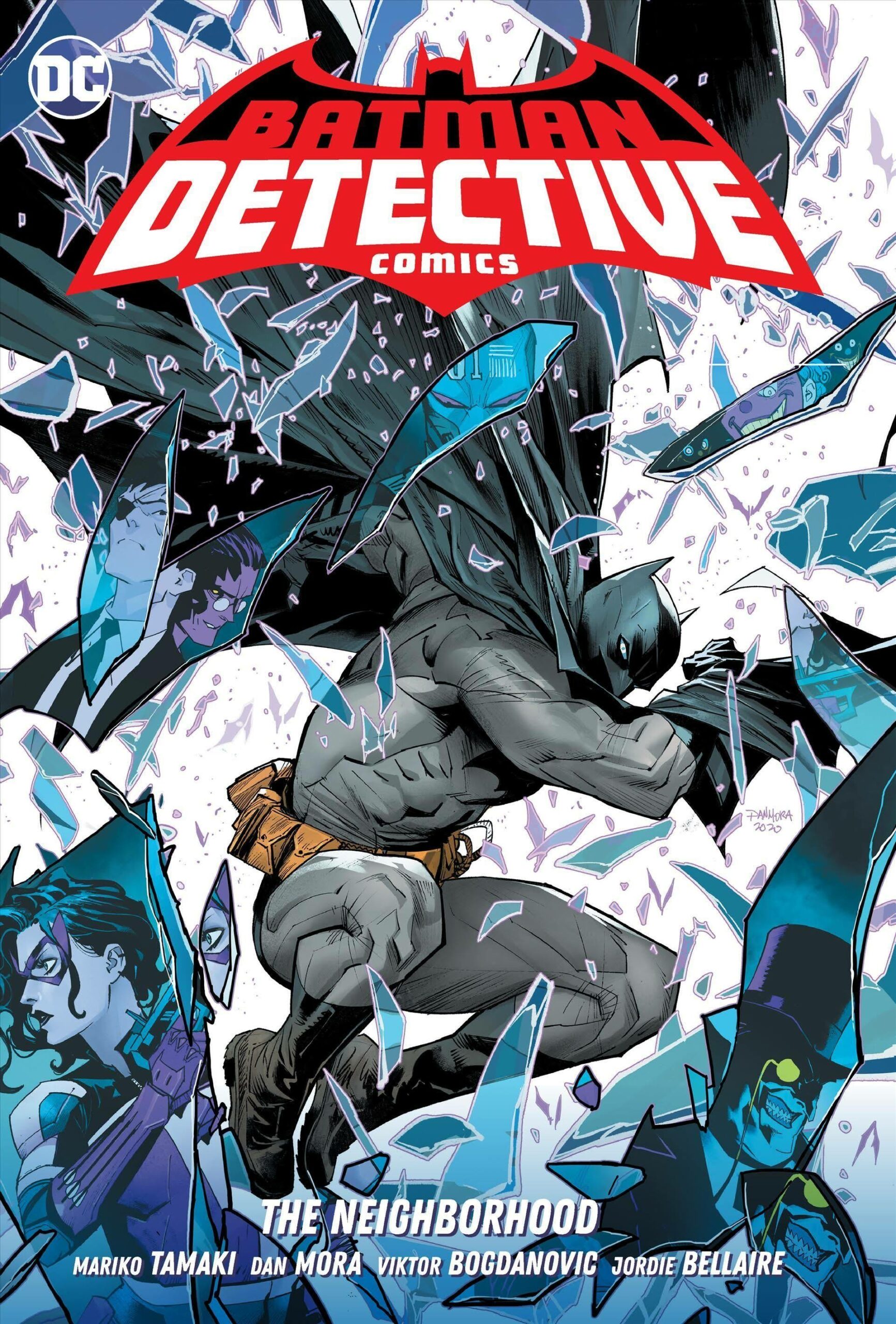 Detective Comics: The Neighborhood is a beautiful hardcover book that collects the first six issues of Mariko Tamaki’s acclaimed run on the series (Detective Comics #1034-#1039). It also boasts all the main Dan Mora covers, the stunning Lee Bermejo variants, features, designs, an afterword by the writer, and more.

In his review of Detective Comics #1034, DKN editor, Steve J. Ray, said that Mariko Tamaki’s continuation of both Peter J. Tomas’s work on the title and the possible future that she, oh so beautifully (and terrifyingly) depicted in her “Future State” stories, made that issue a real treat. I would have to wholeheartedly agree. In fact, her entire run has become a firm favorite, and this book clearly demonstrates why. 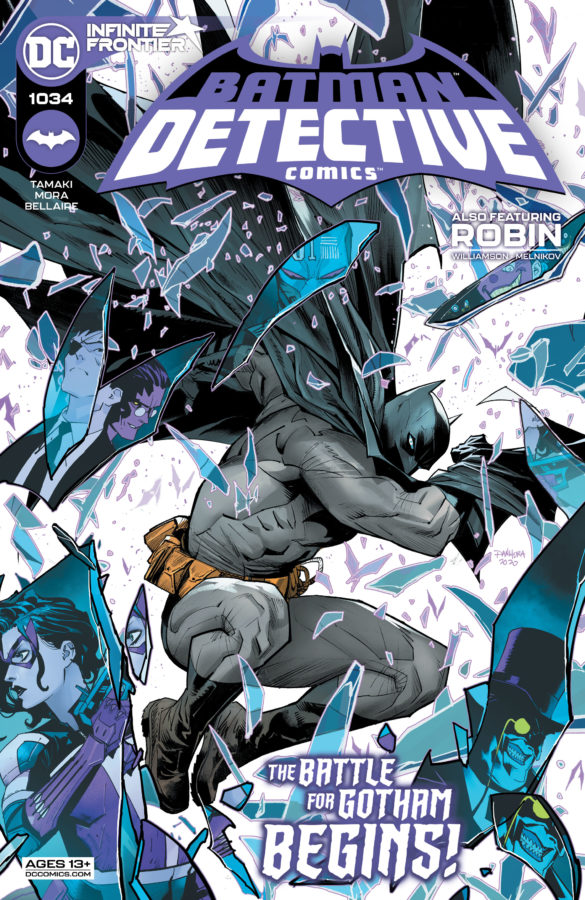 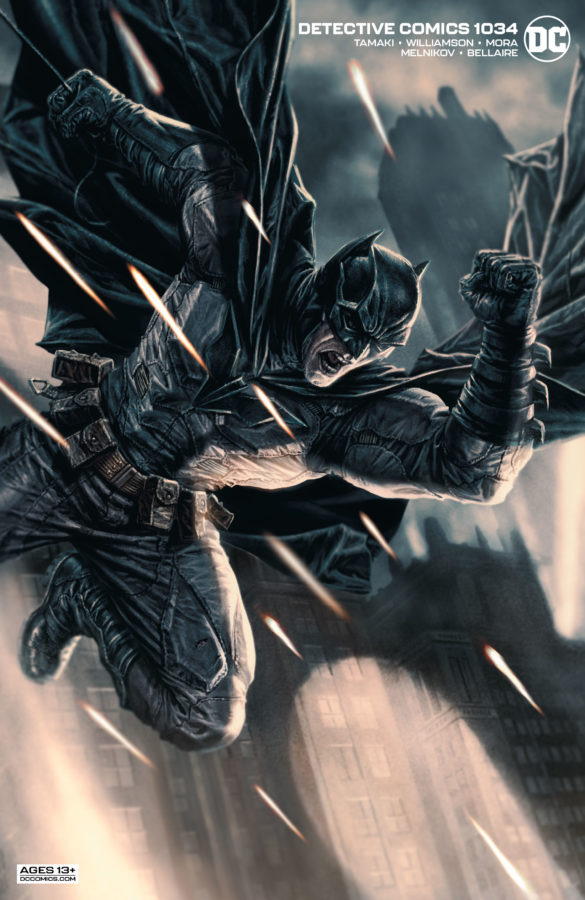 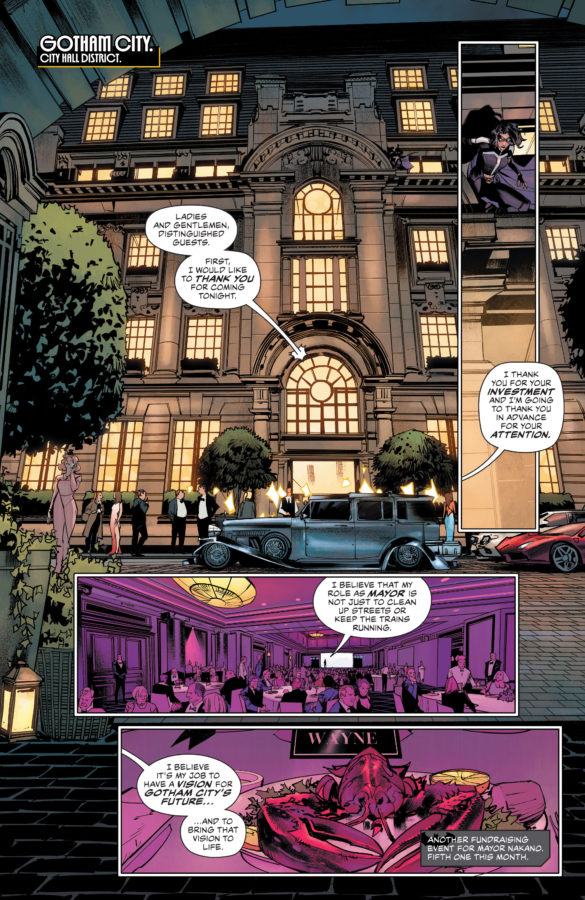 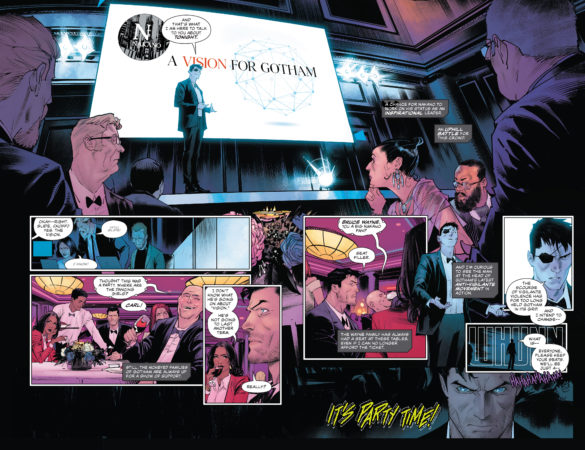 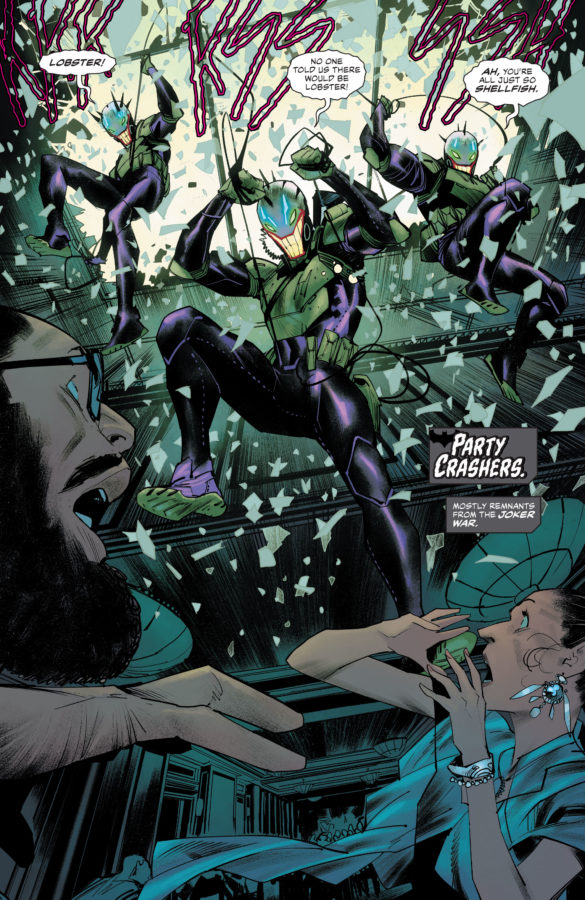 The covers, the variants, and all the interior art just made my heart happy. Dan Mora has quickly become a Batman icon and the way he expresses both the dark and stormy Gotham City and the tension between every character is sublime, not to mention the wonderful colors from Jordie Bellaire, who brings comic book hues to a dark and gritty book (I’m looking at you Huntress!)

The book also collects many of the wonderful backup stories from the series, some written by Tamaki herself, to tie in with, and expand the main narrative. It’s nice for a backup strip to finally cross over with the main story, as until recently DC had been keeping them distinctly separate.

The menacing Mr. Worth; (whom I can only describe as the love child of The Kingpin and Kraven the Hunter from Spider-man) is a one-man wrecking crew tearing his way through Gotham. Authority never phases him, he screams at everyone he interacts with and has a temper that would make the Hulk look tame (I’ll stop with the Marvel comparisons now, I promise). We’re also introduced to a new villain, who wouldn’t be out of place in the Men In Black franchise, as he’s quite Vile. Oh, Batman, you’ve got your work cut out for you… again. 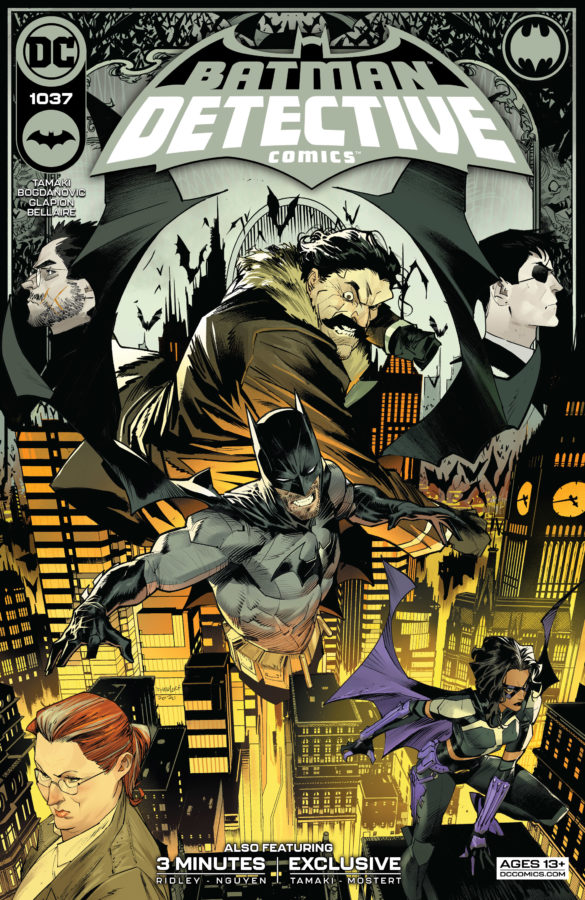 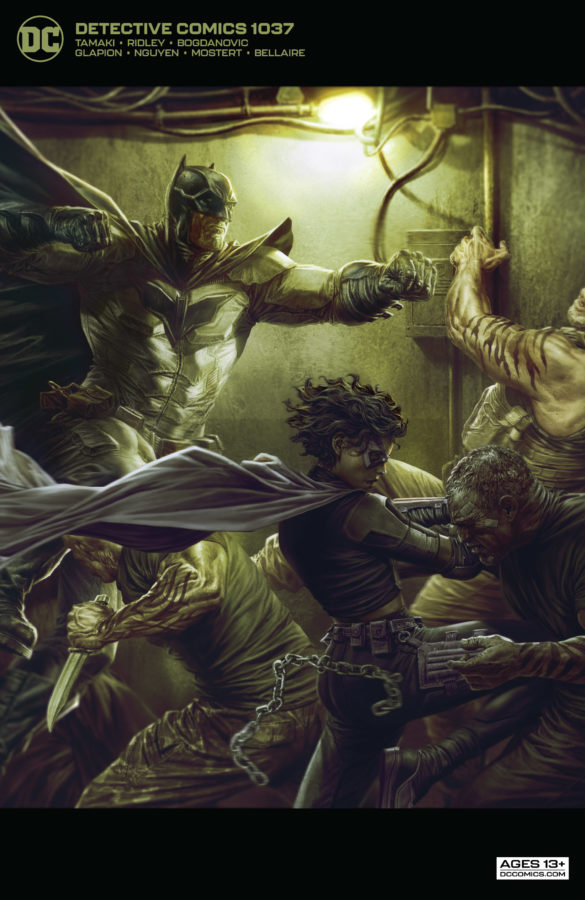 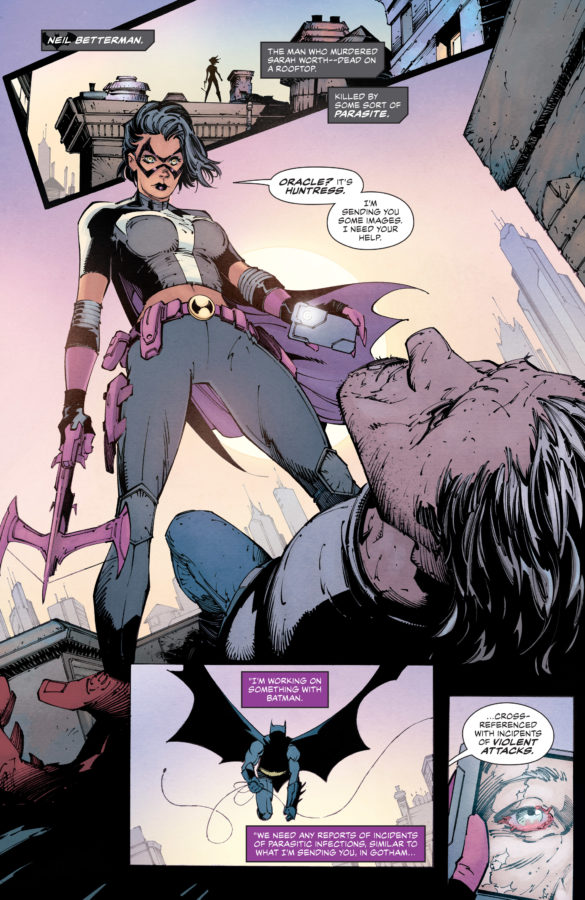 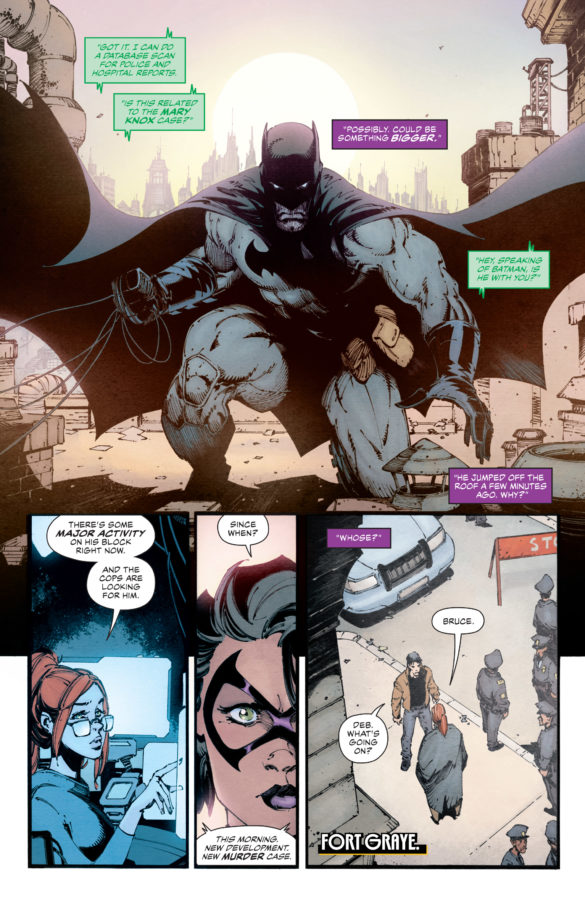 Detective Comics: The Neighborhood also features chapters with pencils by Victor Bogdanovic, partnered with numerous stellar inkers. I was convinced whilst reading these that Bognadovic was Gregg Capullo using a pseudonym, which makes his chapters in this book feel like the art was taken straight out of the fantastic New 52 Batman run (deliberately?) His art is wonderful and really gives us a great Batman to look at, darting across the rooftops; and a somewhat disheveled Bruce Wayne to watch, as he’s struggling with too many plates spinning in front of him.

We’re also treated to the stories featuring Deb Donovan, who’s being described as “Batman’s Lois Lane”. This really just means that she’s a reporter in Gotham… the two ladies have nothing else in common. This story’s told from her perspective, which gives us a better insight into her and tells us a lot about her opinions on the Gotham elite. These views also shine a light on yet another side of Mr. Worth, amongst others, like Lucius Fox and Bruce himself. This opinionated reporter has a taste for scotch and a sharp tongue to go with it. 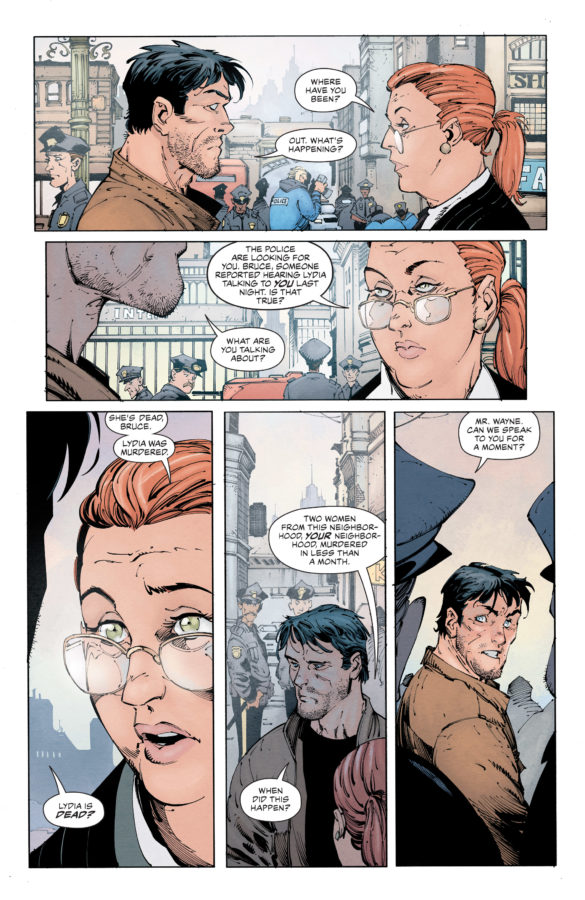 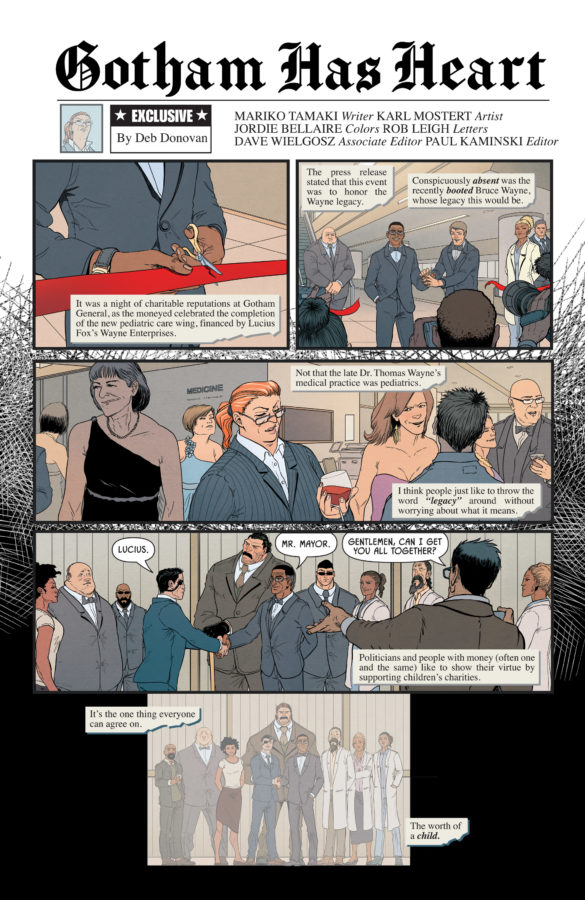 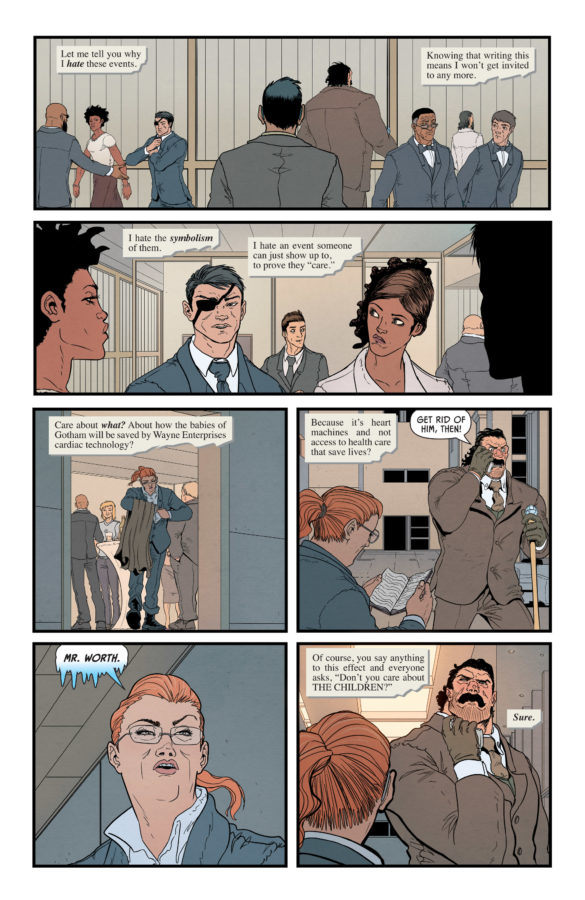 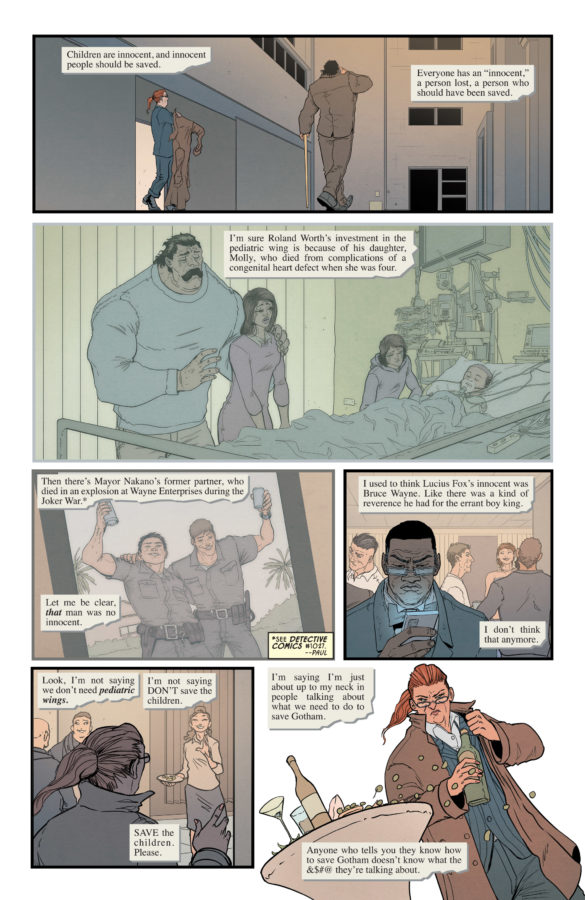 If you’re a villain in Gotham, and Batman has defeated you at every turn; had all the power, but lost it due to some quick thinking and batarangs… can you still be feared? Can you still strike terror into the hearts of your henchmen, the people of Gotham, the police you’re trying to corrupt?

The Penguin backup story by Meghan Fitzmartin, asks and answers all these questions. We see Penguin made into a bit of a joke, by Batgirls, henchmen, and even a reporter; asking “didn’t he used to be one of Batman’s biggest threats?” This is the type of story that’s been rejuvenating villains for years.

Everyone loves a new villain, particularly if you’re a comic book collector looking for a valuable first appearance or someone who hopes to see them appear in a TV show or film. Even if you’re just someone who’s been reading comics so long, it keeps it fresh. So when we start reading about the new villain Mr. Vile and find out he may not be as new as we first thought, it’s a nice surprise. 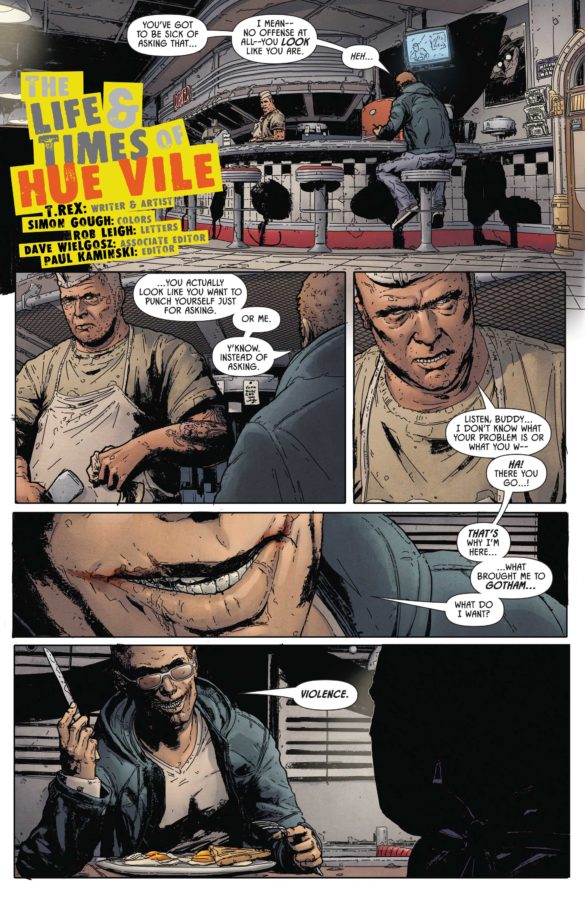 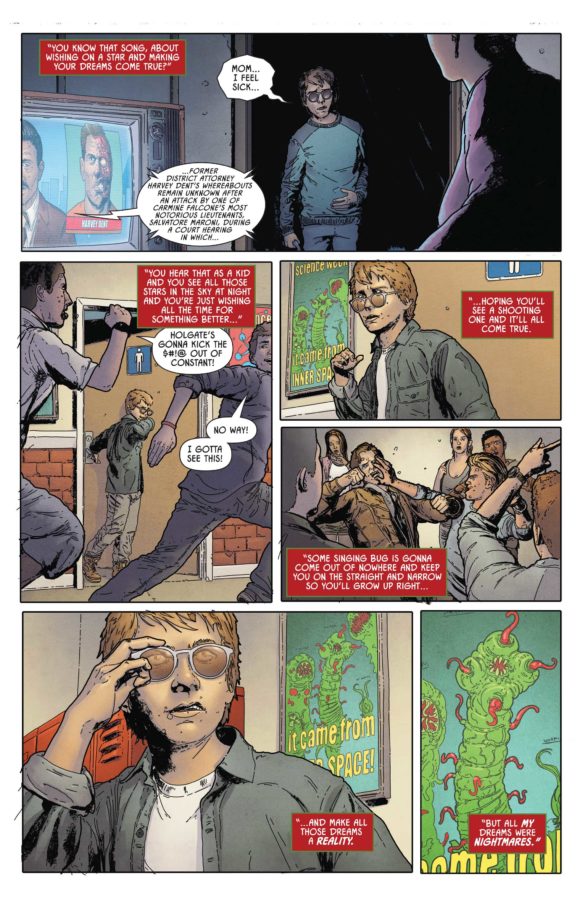 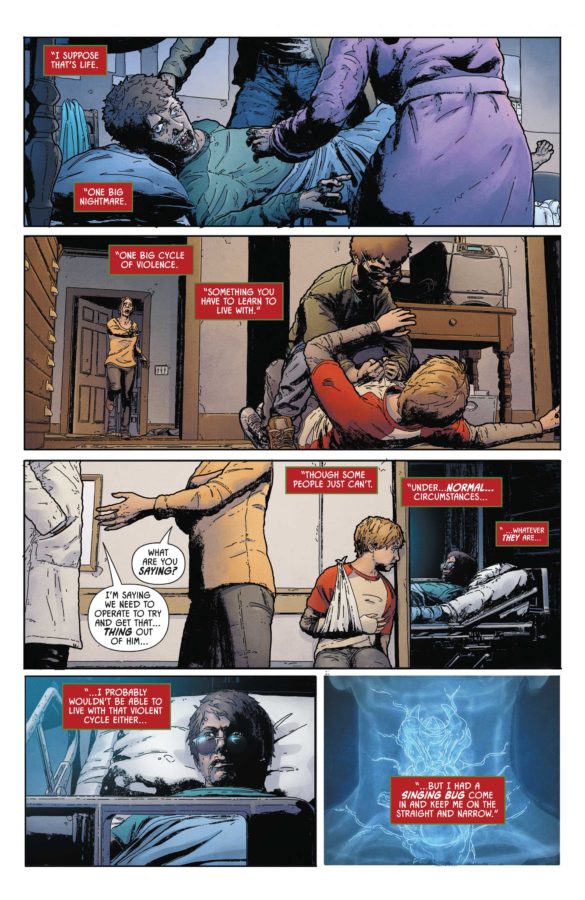 In a beautifully drawn character portrait of a monster, we also learn of the history of Hue Vile, who he was, and how he became that way. According to this story, he’s been body-snatching and people eating since around the same time as Harvey Dent got acid thrown in his face. Which from my memory is around year two or three of Batman’s career. So, he’s no creepy spring chicken. I found this little addition to his character super interesting, as it means he has been operating unseen for over 10 years! Scary stuff.

Detective Comics: The Neighborhood gives readers a story that started as a grounded murder mystery, grew into a supernatural thriller, then evolved into an adrenaline-fueled brawl, we’ve arrived at the finale… A body-snatching alien story. Yes, you read that right. Mariko Tamaki has taken us on a roller coaster ride through a lot of genres in this story and I, for one, have loved every page of it.

Review Copy Courtesy of Penguin Random House, Art Courtesy of DC Entertainment. Detective Comics: The Neighborhood is out now and available to buy or order from all comic book stores, and booksellers: ISBN 978-1-77951-422-6