“The Neighborhood” – Finale and “The Life & Times Of Hue Vile” 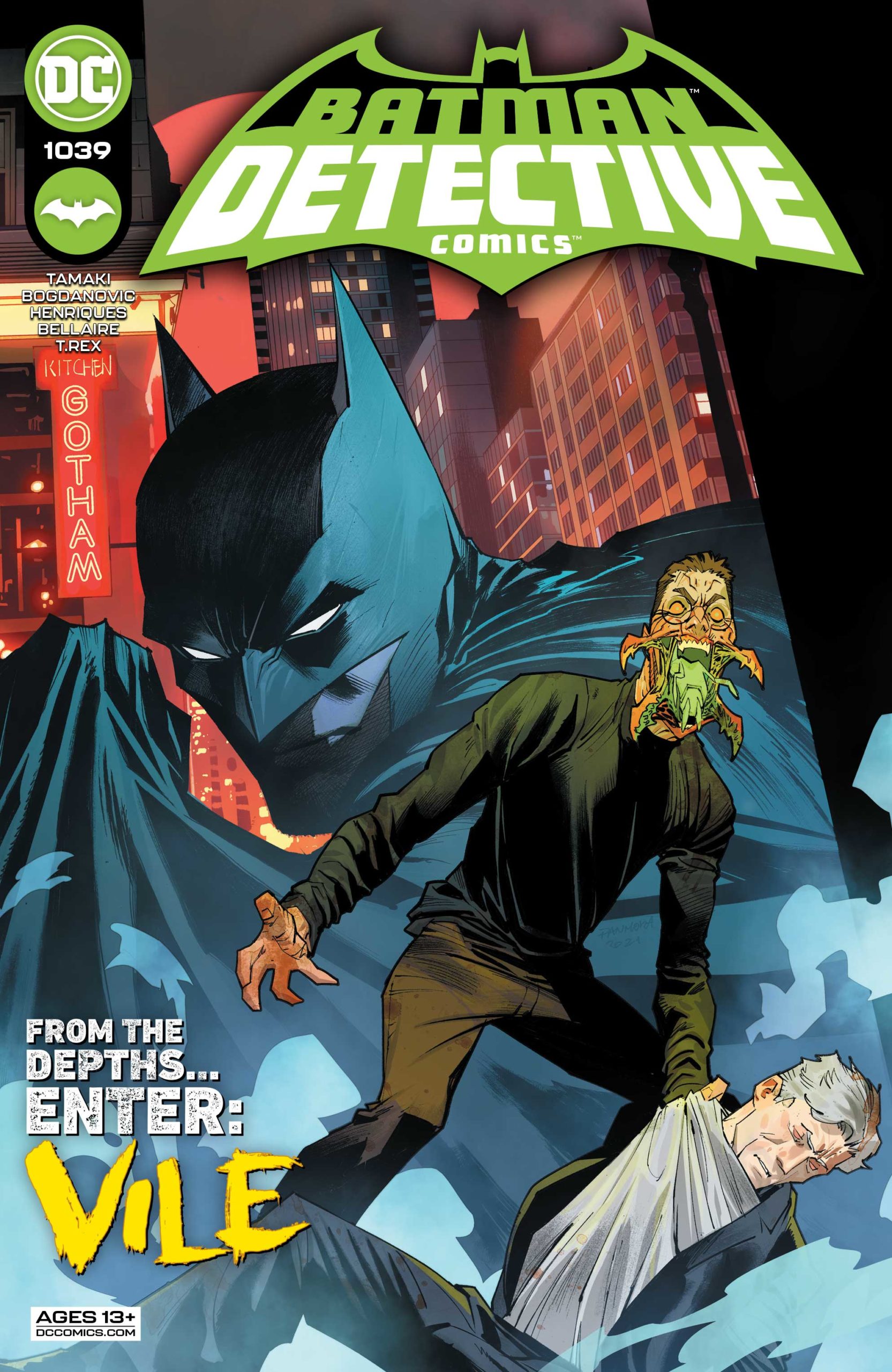 You’re so Vile, you probably think this review is about you, don’t you? Don’t you?
Welcome to Invasion of the body snatchers Gotham City edition. Who can you trust? Who’s the source? Detective Comics #1039 gives us a lot of answers… and a few questions to go with them.

In a story that started as a grounded murder mystery, grew into a supernatural thriller, then evolved into an adrenaline fueled brawl, we’ve arrived at the finale… A body snatch alien story. Yes, you read that right. Mariko Tamaki has taken us on a roller coaster ride through a lot of genres in this story and I, for one, have loved every page of it.

In comics there’s always a problem of building towards a big event, or a crossover with multiple titles. It makes some in between stories feel hollow, like we needed to fill a few weeks worth of stories until the real deal. This is NOT one of those times, this story building towards “The Jury“, and “Fear State” has been an amazing tale of loss, paranoia and rage, that culminates with a shadowy villain who’s been behind so much of it for longer than you think.

I mentioned in my last review that Mr Vile wouldn’t be out of place in a Men in Black story, well I really hit the nail on the head. This slimy creep is a manipulative man eater, and I mean that in the very literal sense. Many characters who we’ve grown attached to through this story fall victim to him in this issue, so here’s hoping his tentacles don’t leave a lasting impression.

I’ve been talking about our new alien abomination a lot so far, but don’t forget about the towering inferno himself Mr Worth, who destroys yet another building in this issue. It really does make you think; if you have enough money and power, can you blow up a building every two days just because you’re really really angry? With a team of rogues joining forces soon, I hope they line up, so Batman can dish out some justice to this group of miscreants!

The Life & Times of Hue Vile

Everyone loves a new villain, particularly if you’re a comic book collector looking for a valuable first appearance, or someone who hopes to see them appear in a TV show or film. Even if you’re just someone who’s been reading comics so long, it keeps it fresh. So when we start reading about the new villain Mr Vile, and find out he may not be as new as we first thought, it’s a nice surprise.

In this beautifully drawn character portrait of a monster. We learn of the history of Hue Vile, who he was, is and how he became that way. According to this story he’s been bodysnatching and people eating since around the same time as Harvey Dent got acid thrown in his face. Which from my memory is around year two or three of Batman’s career. So, he’s no creepy spring chicken. I found this little addition to his character super interesting, as it means he has been operating unseen for over 10 years maybe? Scary stuff.

When you think you know someone, and it turns out they have an alien parasite whispering in their ear to eat you, it really does add a splash of fear to your subconscious. Throw in a Scarecrow and a political manipulator, and I’d say you’re well on your way to a Fear State.

This team has delivered week after week, with a constant stream of amazing issues, beautiful art and twists and reveals that make me gasp… Constantly. If you’re not subscribed to Detective Comics at your local comic shop, you should be.
These stories are written for comic lovers!

Detective Comics #1039 is well Worth Vile (Sorry, not sorry)

Margot Robbie Is ‘Taking a Break’ From Harley Quinn