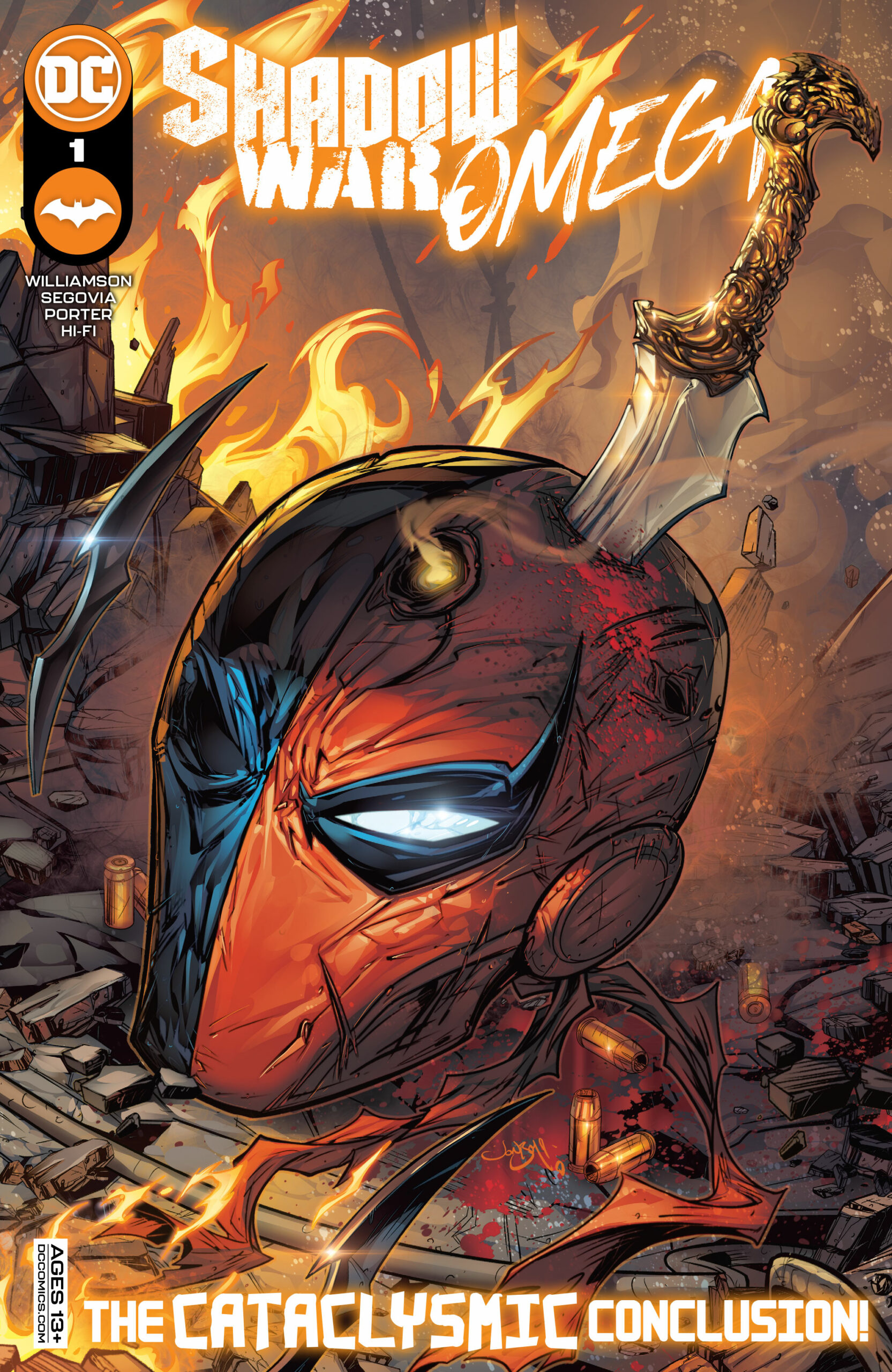 Shadow War Omega #1 brings the curtain down on the events of the excellent Shadow War saga. Or does it?…

In my humble opinion, the “Shadow War” saga has been a prime example of top-tier storytelling, and DC Comics at their finest. A heady mixture of action, shocks, revelations, and most importantly, character development. Joshua Williamson has crafted an engaging, enthralling, and explosive story that’s kept its narrative tight and the stakes high. Bombastic and brash, yet also surprisingly intimate, it’s a tale that I think I’ll be going back to for further reading in the years to come.

Following on from the revelation in Robin #14 that the Deathstroke impostor was none other than a vengeful Geo-Force, this issue sees an abundance of violence ensue. What sets it apart from a bog standard slug-fest however, is the emotional heft that Williamson adds to the proceedings. This isn’t about world domination or a diabolically evil plot, this is highly personal with the true sense that grudges can be held for a very long time indeed. The Markovian Royal family is not to be crossed!

The choice of antagonist is a very clever one, as this particular character is driven by righting perceived wrongs and exacting revenge. Both of his targets, Talia al Ghul and Slade Wilson, have crimes to answer for, so as a reader I do feel some degree of empathy towards Geo-Force, despite his extreme methods. By utilizing him in this way, rather than making him a cackling villain, the story shifts into that shades of grey area that I feel is when comics are at their very best.

Whilst it’s the end of the “Shadow War” era, the long-standing ramifications are going to be very interesting moving forward. The paradigm shift in the Bruce/Damian relationship, the ultimate fate of Slade Wilson, and his impact on what’s to come next, as well as Talia’s newfound sense of honor and Geo-Force’s new living quarters. Events are wrapped up in a bow, but this particular bow has several loose strands that are just begging to be pulled at.

The art is top-level throughout. Messrs Porter, Henderson, and Segovia are at the peak of their powers here. The issue’s vibrant, violent, and gorgeous! The balletic brutality of characters in full flight is what I live for and this issue does not scrimp on that kind of content. The three artistic styles dovetail nicely and create a seamless visual experience; there’s certainly no jarring jump from one artist to the next. Don’t believe me? Buy a copy and see for yourself.

Shadow War Omega #1 provides a wonderful end to a truly satisfying arc. Anticipation, build-up, pay off and aftermath have all been exactly what I wanted. The inevitable collected edition of this arc will be a must-have book, get it reserved by any means necessary!