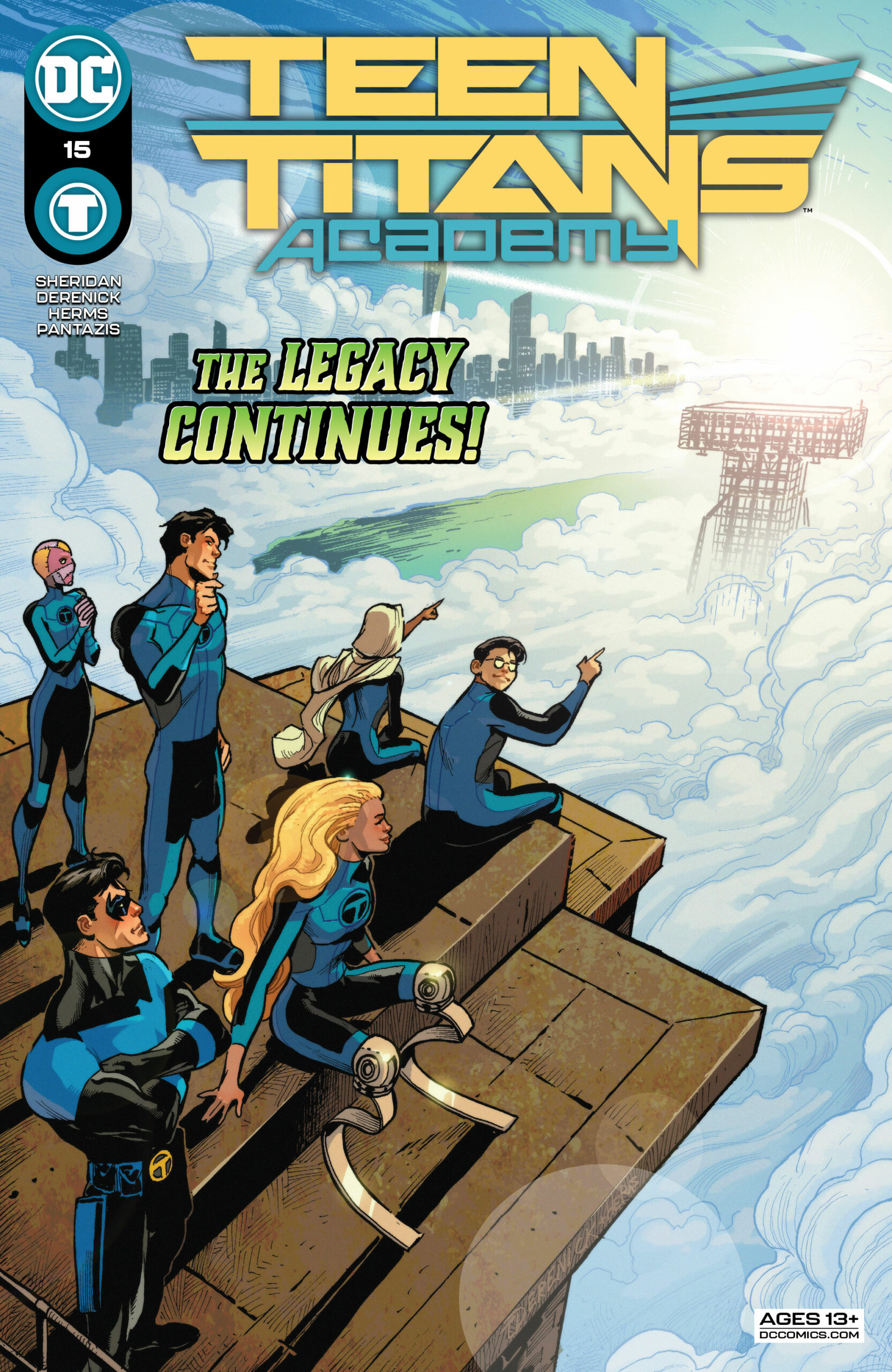 Teen Titans Academy #15: Final issue! In the shadow of the new Titans Tower, the students and faculty decide whether the school is the right place for them.

Just before the DCU heads into Dark Crisis, Tim Sheridan reaches the final issue of his series in Teen Titans Academy #15. Sheridan has had a number of threads running through the title that indicated long-term plans for the book. However, the title’s seemingly abrupt cancellation has required him to quickly wrap up many of those threads. Or at least put them on the back burner for now.

We don’t really know what DC’s plans are for their next Titans title. The older team members will figure prominently in Dark Crisis, so we don’t know what their status or that of the school will be in the wake of that event. Will Sheridan be able to pick up where he left off with a new title, or if a new writer will step in to take the characters in a new direction?

This finale focuses on all three main storylines; the first being the recent merging of Changeling and Cyborg. Sheridan has managed to bring this thread to a quasi-resolution that’s actually quite clever. Raven is able to cast an illusion that makes them able to interact with the world as their separate selves. Yet, they are actually still merged.

I think this is particularly clever as it allows them to appear in Dark Crisis or other books as their old selves for now. If Sheridan is able to return to the Titans, he can continue his story of their merging. If instead, some new writer steps in, they can ignore it completely, implying that the situation was resolved off-panel.

Another major storyline deals with some of the freshman students on a rescue mission to save Shazam, Nevermore, and the teenage Black Adam from Apokolips. The fact that they’re able to carry off such a rescue shows how much the junior class has learned and grown during their first year in the Academy.

The third main storyline deals with Chupacabra and his uncle. Uncle Jorge is a loving tribute to a DC great that we recently lost. Consider that Chupacabra’s family name is Pérez and Jorge is the Spanish form of the name George. Add the fact that he’s a talented artist, and it’s unmistakable that he was created as an homage to George Perez.

This makes the story especially poignant, especially when Uncle Jorge tells Diego that he’s leaving. In the story, he’s just retiring and moving away, but it serves as a reminder of his real-world counterpart’s final departure from this world. Before he goes, we see him doing what he is best known for, as he draws his nephew taking flight, with Titans Tower in the background.

Uncle Jorge also has some parting words for his nephew and the readers. He tells Diego:

The timing sucks… Let’s just be grateful for the moments we’ve had–and make the most of what’s left.

This serves as an incredibly touching send-off for one of DC’s greatest creative talents.

While a lot’s left up in the air, some small hints about the future are teased. Shazam mentions his sister Mary and an editor’s note tells us to pick up The New Champion of Shazam! to find out what’s in store for her. We’re also introduced to the new crop of freshman students, the teenage Black Adam, as well as Primer and Whistle from DC’s line of graphic novels for younger readers, are amongst them. There are also other unknown students, whom we will hopefully get to meet in a future Titans title.

Unfortunately, due to the suddenness of the title’s cancellation, Sheridan has had to rush the story significantly. This is particularly evident in the storyline set on Apokolips. The writer has had to quickly gloss over how Shazam and the others come to be on Apokolips, and the battle is rather quickly resolved.

However, given the limited page count Sheridan had to work with, I believe that rushing this story to give more space to the George Perez tribute and the title’s concluding sequence was a good call. The battle was a foregone conclusion, so compressing it doesn’t really hurt the story much, although ending the series without a proper conclusion would have been rather jarring.

Teen Titans Academy #15 is a fantastic final issue of this series from Tim Sheridan and Tom Derenick. While it’s inevitable that the Titans will return in some form, I hope that Tim will be afforded the opportunity to complete his Titans story.