“The Clockwork Killer” – Chapter One 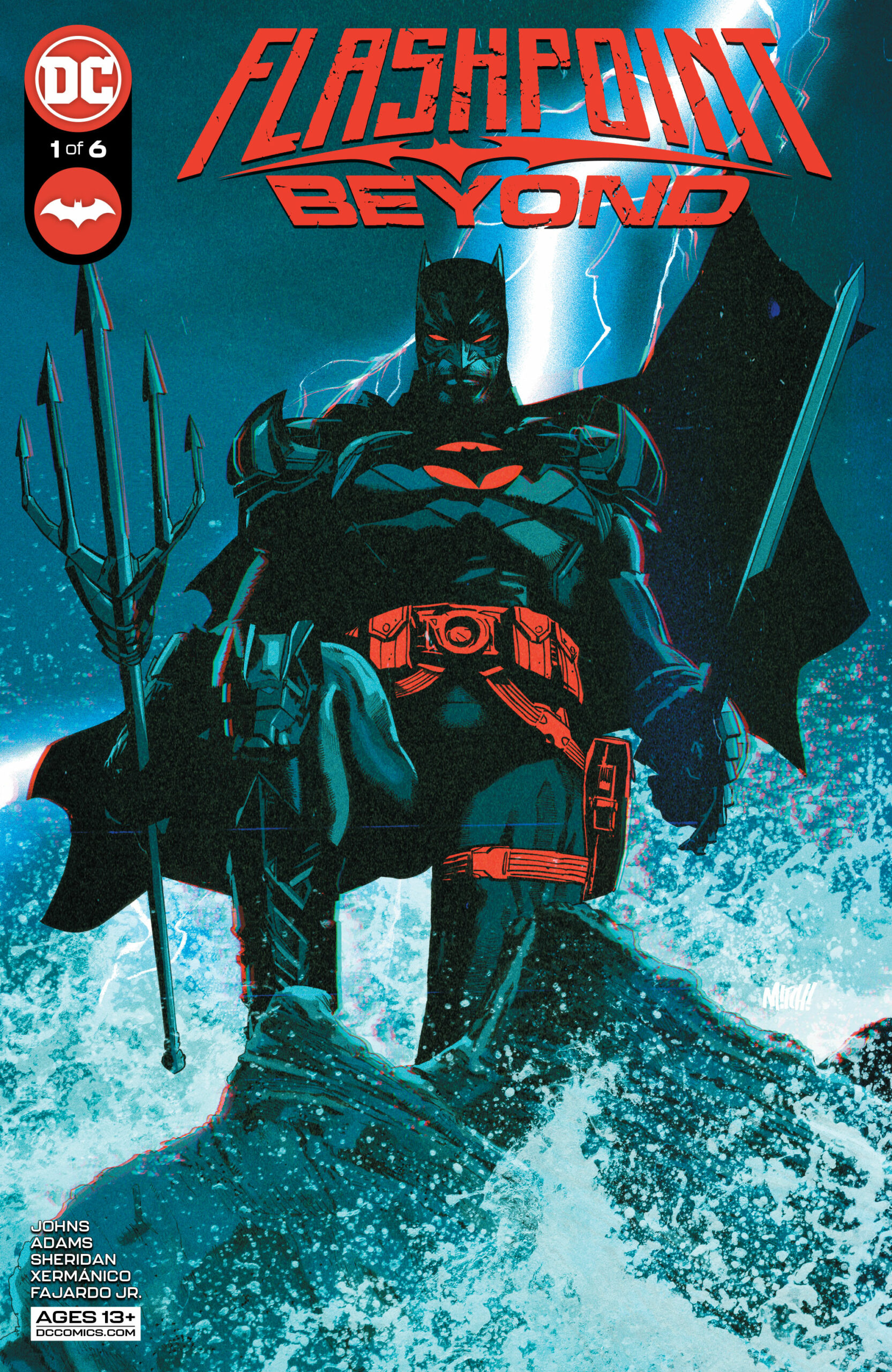 The plot thickens in this week’s Flashpoint Beyond #1, as two Batmen struggle to solve the mystery of why this timeline still exists.

Flashpoint Batman has somehow returned to his doomed reality. Having accidentally killed that version of Barry Allen in an attempt to transform him into the Flash, Thomas Wayne goes on the hunt for Aquaman, whom he believes is the reason for the failed experiment. Meanwhile, Bruce Wayne gets a visit from “our” Barry Allen who believes that Eobard Thawn has returned. After barry leaves, Batman is warned by a mysterious visitor that his plan (whatever that might be) is probably not a good idea. 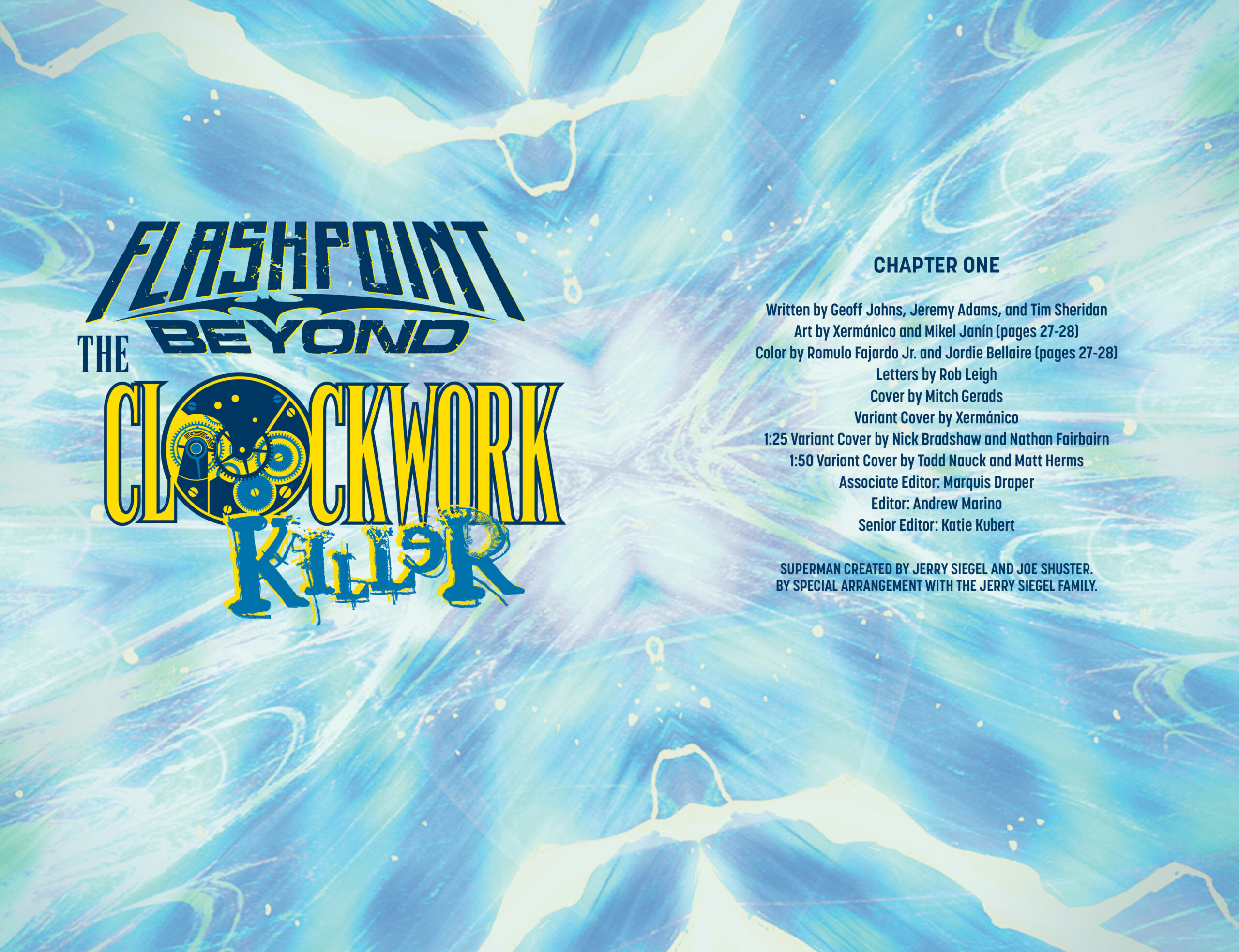 As Flashpoint Beyond unfolds, it seems that Johns and company are returning to the theme of time. Last month, Johns established something new; apparently, DC stands for “Divine Continuum”, which is divided into space and time (Einstein is rolling over in his grave right now). Over the course of its history, DC has spent a lot of time playing with notions of space via the multiverse. However, it has spent less time exploring notions of time, largely because hypertime, a concept created by Mark Waid and Grant Morrison in the 90s, was sidelined after Infinite Crisis.

Here, Johns finds fertile ground to till, as everything matters now continuity-wise. In fact, the original Flashpoint as well as Doomsday Clock both were meditations on time. So, while it may seem that Johns is tying these two stories together, thematically they go hand-in-hand.

As for the script itself, I was mildly surprised that Johns had help. What’s particularly impressive is that I couldn’t distinguish who wrote what. The entire issue felt cohesive in narrative and voice. These three writers work very well together.

According to the credits, there are two different artists and colorists behind the visuals on Flashpoint Beyond #1 also. I’m not gonna lie, but had I not been responsible for reviewing this title, I never would have known. I usually have a good eye for when there’s a shift in artists for a title, so once I saw that there were essentially two sets working on this book, I re-scrutinized the pages and came up baffled. Xermanico, Mikel Janín, Romulo Fajardo Jr., and Jordie Bellaire did a fantastic job homogenizing their styles.

On a different note, I was particularly impressed by one particular splash page where the layout was in the shape of a bat. Mind you – I’m a sucker for creative paneling. Anything that deviates from the basic layouts used by most artists usually catches my eye. What’s particularly neat about this page is the way that the panels progress from left to right. The sequencing along with the layout makes for a striking spread.

Flashpoint Beyond #1 is a solid follow-up to last month’s issue #0. Returning to this timeline has been fun so far, as Johns gets to play with all of his neat toys once more. Art-wise, the book looks great. It may not be quite Andy Kubert level (he drew the original series), but not much is. Overall, this book was a hit.

Final Verdict: It’s well worth your “time” (see what I did there!).