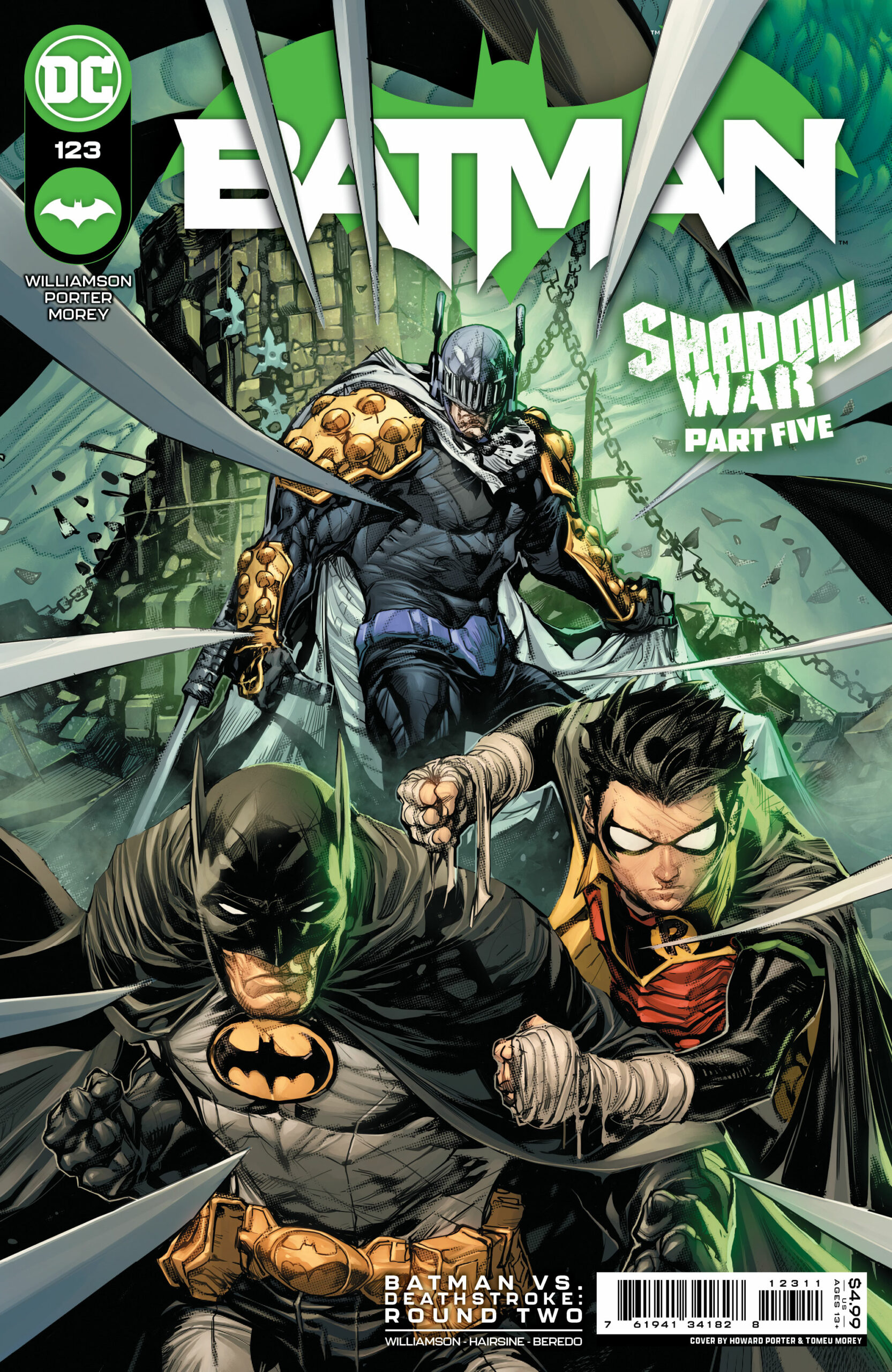 Batman #123 is one hell of a packed issue! Joshua Williamson has done a marvelous job of following different sets of characters on their various quests, before bringing events to a monstrous crescendo that will certainly pull at the heartstrings of all readers.

This issue sees Batman as the ace detective, rather than the physical combatant, as he and Damian follow the clues to understand who indeed was impersonating Deathstroke when they assassinated Ra’s al Ghul. This odyssey requires them to run the gauntlet of locations ranging from Blackgate Prison to the heavily guarded workshop of one Peter Gambi.

Each location helps to reveal a little bit more of the mystery, but kudos to Williamson, as he’s pacing this arc out perfectly. There are no quick reveals or endless red herrings, instead, he’s allowing the story to breathe and move forward at a pace that feels just right.

One particular highlight shows the usually infallible Batman being thrown off his game by Damian’s reveal of having a love interest in his life, as it shows the human side behind the masked crime fighters. Brief, subtle and comedic, it’s a nice interjection through the darkness.

The eventual reveal of the perpetrator is going to hopefully be worth the wait. I have my own suspicions regarding that identity but it does remain to be seen. Indeed, we almost get that answer this week, but no, all good things will eventually come to those who wait.

The other main thrust of the story follows Deathstroke and Respawn as they evade the forces of Talia al Ghul whilst also trying to piece together who framed them. This Father/Son dynamic is a nice mirror image to that of Bruce and Damian, as, whilst on opposite ends of the moral spectrum, familial ties can be the same no matter what. Despite Slade’s tendencies, we know that he can also be a just and caring parent. First and foremost though, he’s a warrior. Warriors fight, and boy do we get a fight scene for the ages here! Scores of “ninjas with guns”, all heavily armed and dangerous, descend upon Slade.

The art of Howard Porter shines so brightly in this as he produces panels that are so heavily populated but full of detail and intricacy. His characters have a great deal of substance to them, they look stylized, yet realistic, and authentic. I could look at page after page of Porter’s art, making this issue a real feast for the eyes. His work on the final panel of this issue, which features the aforementioned ending, is one that does not bode well for any enemies of Slade Wilson moving forward…

Batman #123 moves the plot of the “Shadow War” arc along perfectly. We get a nice mix of action and detective work, and one does get the sense that the end is not far away now. This arc has massively lived up to expectations thus far and if this issue is anything to go by, the payoff will deliver in a big way!